Half Life returns with this impressive remake. 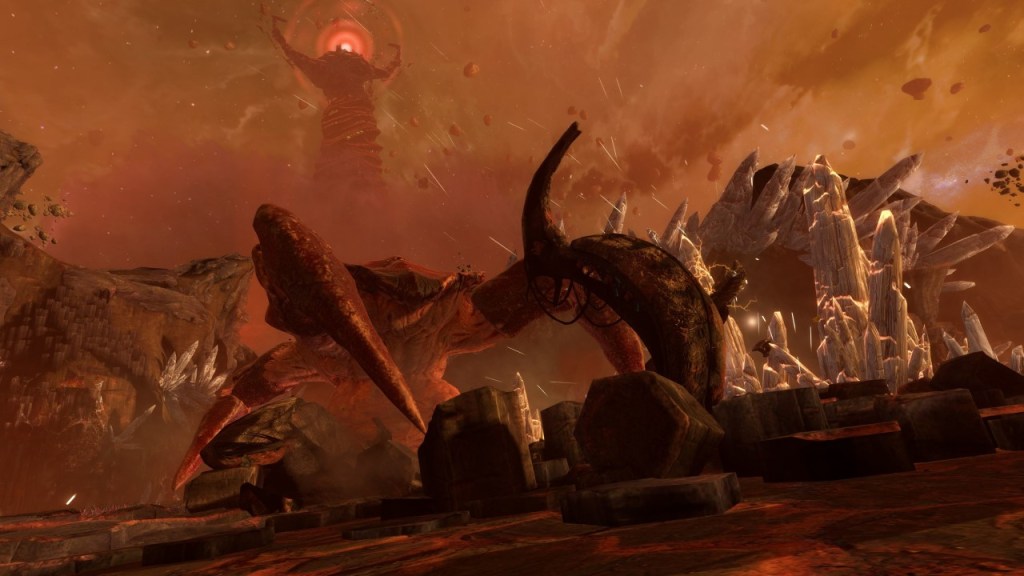 It’s been nearly twenty-two years since Valve dropped their landmark first-person shooter Half Life, and the game has not aged near as well as its sequel. The large leap in technology between the two titles was stark, and while Half Life remains a great game in its own right it doesn’t quite segue into Half Life 2 as neatly as it should. Valve ported the title from their aging GoldSrc engine into their new Source engine shortly after Half Life 2 debuted, but the update was minimal in most respects. Textures, animations, and environments remained the same. From a surface-level perspective the port to Source didn’t add or alter anything substantial.

Enter Crowbar Collective, a group of like-minded fans who decided they would remake Half Life in its entirety within the Source engine, performing the work Valve was reluctant to do. Dubbing their project Black Mesa after the infamous setting of the first game, Crowbar Collective initially released their work in 2012 as a mod, before the project eventually hit Early Access in 2015. Half Life fans were delighted to see Crowbar had painstakingly refreshed every aspect of the game, keeping it familiar while bringing it closer to the presentation and polish of Half Life 2. The project was even blessed by Valve themselves ensuring its survival, unlike other similar fan projects for other games.

But delays soon set in as Crowbar was hellbent to overhaul Xen, the lackluster final area of Half Life, into something befitting the title’s legendary status. It’s been roughly five years since Black Mesa entered Early Access, and I can confidently say that the wait for the finished product has been worth it. Xen isn’t merely “good” now; Xen may be the best portion of Black Mesa. 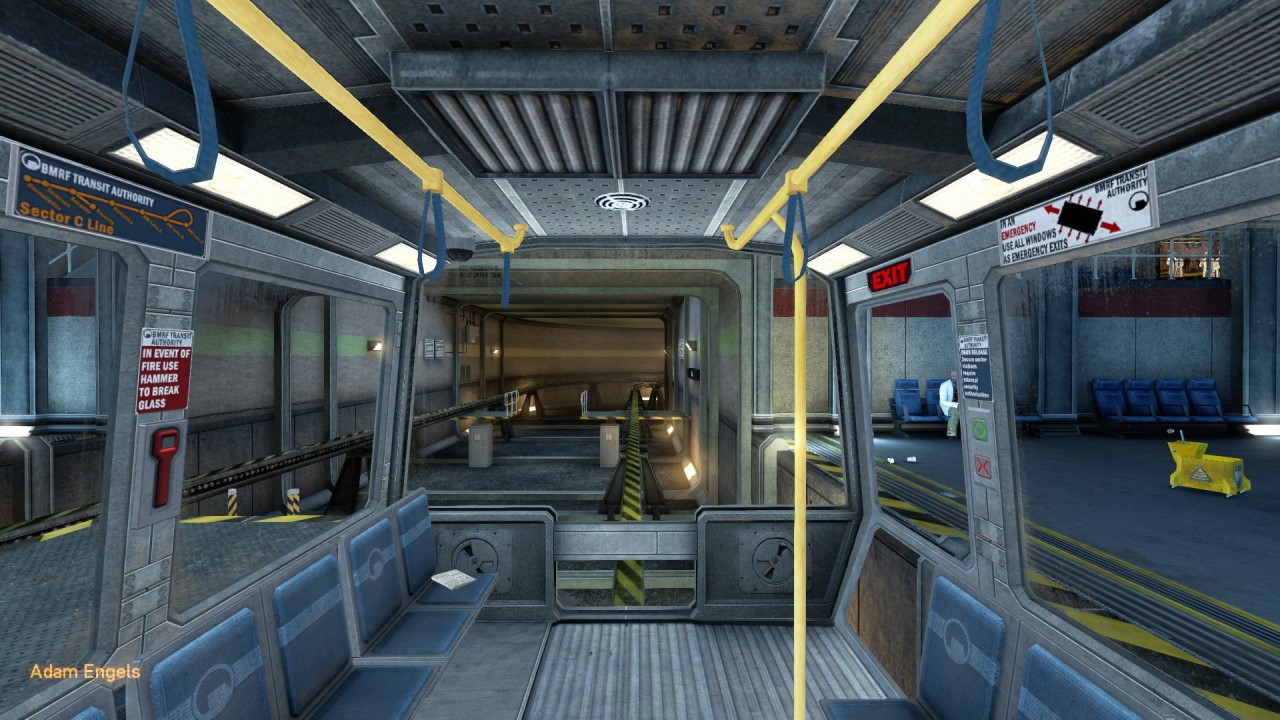 Black Mesa is more than a fresh coat of paint.

For the uninitiated, Half Life was one of the first shooters to adopt a more linear approach to narrative with an emphasis on ambient storytelling that occurred around you than within a cutscene. The experiment was a massive success, and Valve went on to perfect the idea with Half Life 2. The sequel was littered with little details within the world that bolstered the narrative and provided a sense of ownership over the tale, details Half Life couldn’t provide as abundantly due to limitations of the technology at the time.

Black Mesa corrects this by remaking every single level in the game from the ground up, with Crowbar lovingly sprinkling new textures, images, music and more throughout the game. The early offices are ripe with new items, such as whiteboards and sticky notes that provide a greater insight into what was being done at the Black Mesa Research Facility in New Mexico. What were once barren industrial hallways now blend together more cohesively thanks to a smarter emphasis on set design.

Even the minor physics-based puzzles from Half Life 2 have been retrofitted into Half Life within the Black Mesa project, strengthening the connective-tissue between the two games. Black Mesa largely follows the same format and flow of the original game, with many areas being instantly recognizable to returning fans, but each is now flush with additional details that enrich the setting. Formerly staid hallways now have multiple windows and doors that lead into offices flush with atmospheric flourishes. Old platforming bits that required you to push a box slowly under a ventilation shaft now benefit from the included physics system from Half Life 2. 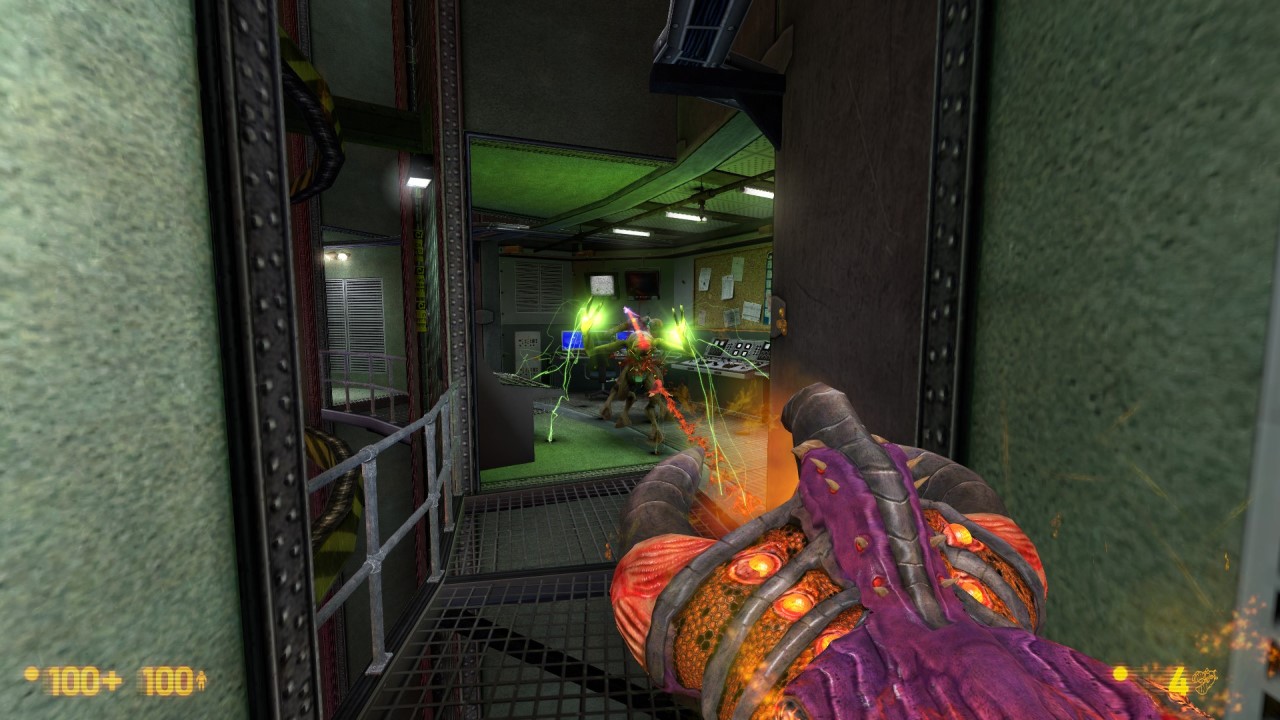 There isn’t a single portion of Black Mesa that feels lazy or rushed because every level, texture, animation, and sound has been given some form of love. Enemy AI is sharper, weapons fire with a satisfying punch, and progression flows more cohesively from challenge to challenge. The outdoor sections have been blown wide open and the updated views sell the idea that you are in some remote facility deep in the Mojave Desert. Black Mesa has made the gap between Half Life and Half Life 2 feel like a mere couple of years, instead of the full generational hop that took place between the two. It’s an impressive accomplishment, and the updated lighting and clean anti-aliasing both ensure Black Mesa will age infinitely better than the source material.

There are some quibbles that remain, in large part due to the two decades of game design that have followed in the wake of Half Life’s release. Platforming has been improved in Black Mesa over the original Half Life, but there are still times where Gordon Freeman feels like he is covered in a thick layer of pig fat and spite as he slides graciously around thin platforms and conveyor belts. Checkpoints can still occur in precarious situations, setting you back on death to a moment that feels like a handicap. Loading still pauses the game as new assets are generated, and even on an SSD these can take a few moments. Nothing glacial, but they do sap your momentum.

Gunplay is improved over the original, thanks to the framework Half Life 2 and Source now provide, but even with the added cover you can find yourself dying rapidly in the stock, titular Black Mesa difficulty. Because the game still relies on the now ancient concept of health packs and shield pick-ups this can make some encounters more of a slog than others. Crowbar Collective have dotted the combat arenas with life-sustaining recharge stations and health boosts, but anyone acclimated to ten years of automatic health regeneration will struggle during fights. Doom this is not.

None of these archaic issues are gamebreaking, but they do demonstrate how far we have come since Half Life 2 and the Source engine changed the gaming landscape. Black Mesa is leagues better than the first Half Life in regards to modernization, but it still shows its age. None of this will remain on your mind, however, once you reach Xen. It may have taken Crowbar Collective the longest to bake, but the whole experience prior to stepping into the alien landscape now pales in comparison. 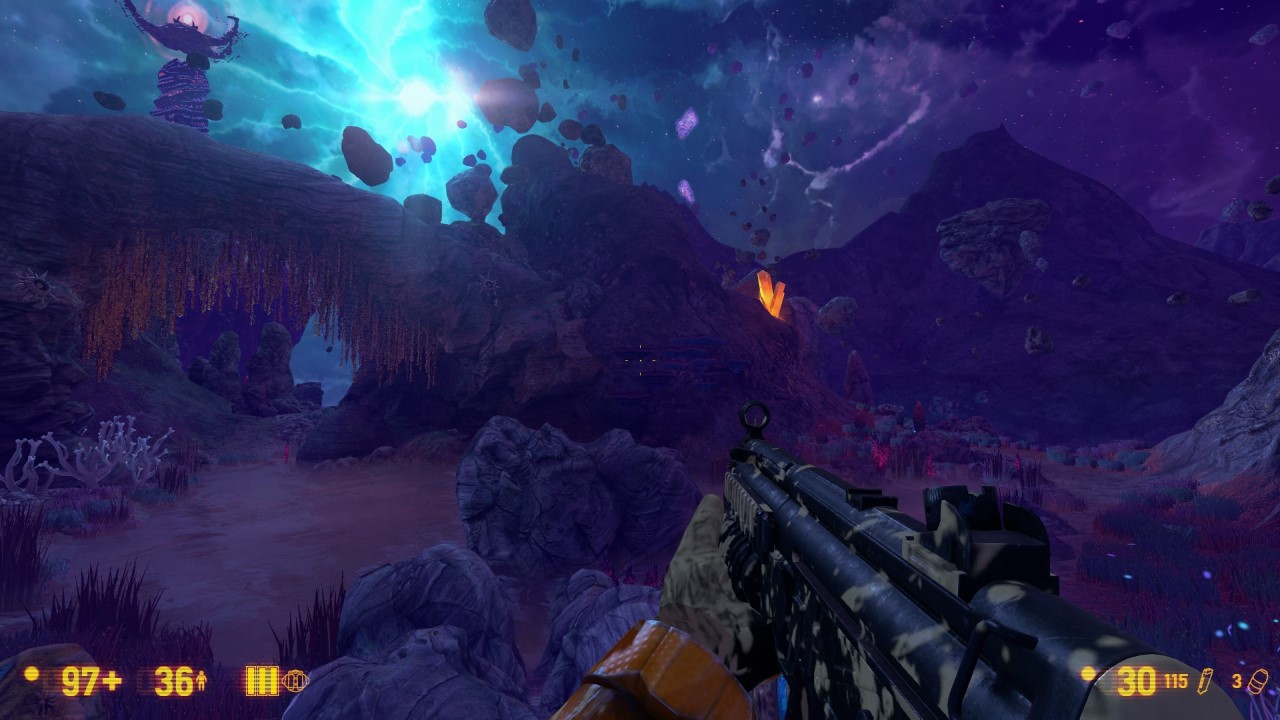 Xen is the jewel in Black Mesa’s crown.

Back in 1998 Xen was an absolutely flaccid finale. The dull environments, shabby platforming, and lackluster final boss hobbled what was an otherwise stellar experience. Everything leading up to Xen felt leagues better, and the dissonance in quality became almost as legendary as the game itself.

Crowbar Collective wanted to right the ship and make Xen the ending Half Life deserved, and their efforts have paid dividends. Xen is easily the best part of Half Life now. Platforming is no longer a pain, but instead a joy to perform with a solid burst jetpack that doesn’t make Gordon feel like an errant rocket when used, and the frustrating low gravity has been removed entirely. The length has been increased with more set-pieces, puzzles and encounters that constantly escalate as you make your way towards the infinitely better Nihilanth encounter. The updated Gonarch encounter could easily serve as the last fight in any other game, it’s that well realized and revitalized. 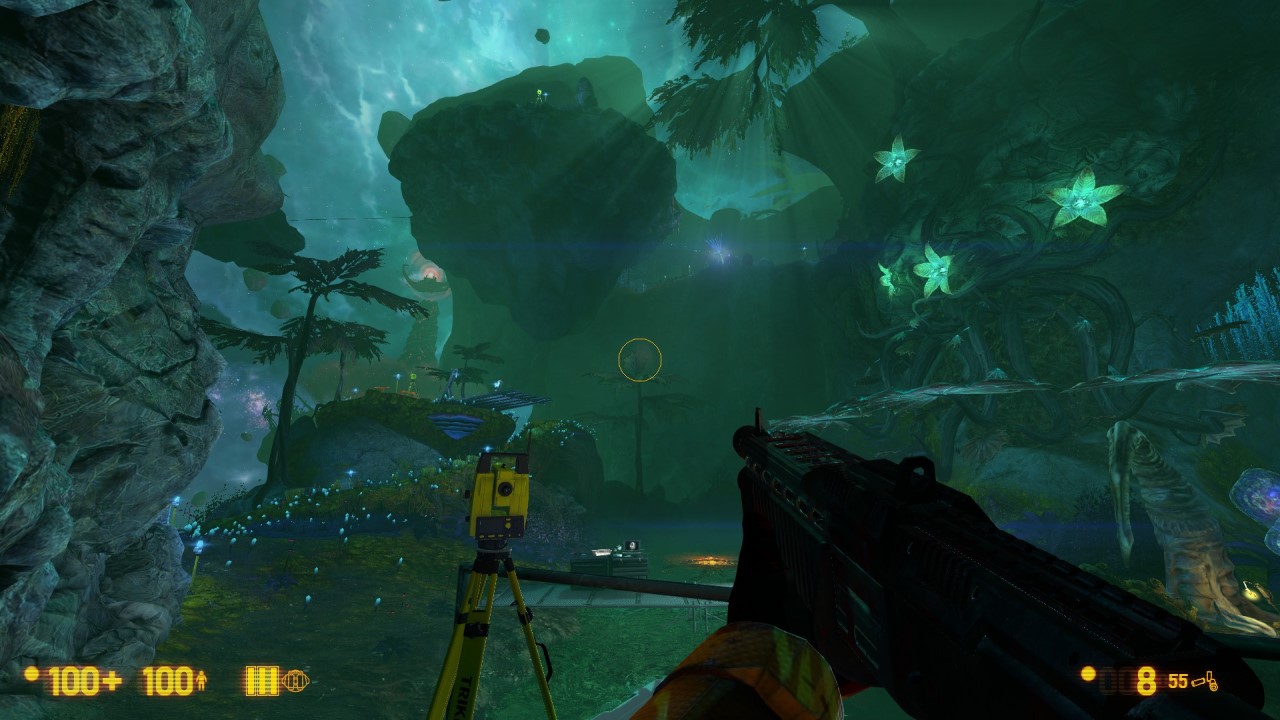 That says nothing of how jaw-droppingly gorgeous Xen is in Black Mesa, awash in color and permeated by an otherworldly ethereal glow. Xen feels truly alien – like a place locked out of space and time you had no business visiting. But visit it you do, and the visual splendor on offer justifies Black Mesa’s existence alone. Ephemeral blues and purples give way to more familiar reds and oranges that pulse with a sinister menace. Bizarre flora assaults you as you scramble around the deadly fauna, and the added puzzles require you bounce around the dazzling locale.

Black Mesa’s Xen has elevated Half Life into the upper echelons of gaming next to Half Life 2, a tier the original once occupied until its superior sequel consumed the zeitgeist. It’s so damned good that I would recommend new Half Life players start with Black Mesa instead of the original Half Life before jumping into Half Life 2, and eventually Half Life: Alyx. Sure, the original would remain “required reading”, you could say, but Black Mesa and Xen are such a stark improvement that you’d be forgiven for believing this project was developed in-house by Valve itself. The fact it was completed by a small team of fans in mind-blowing. 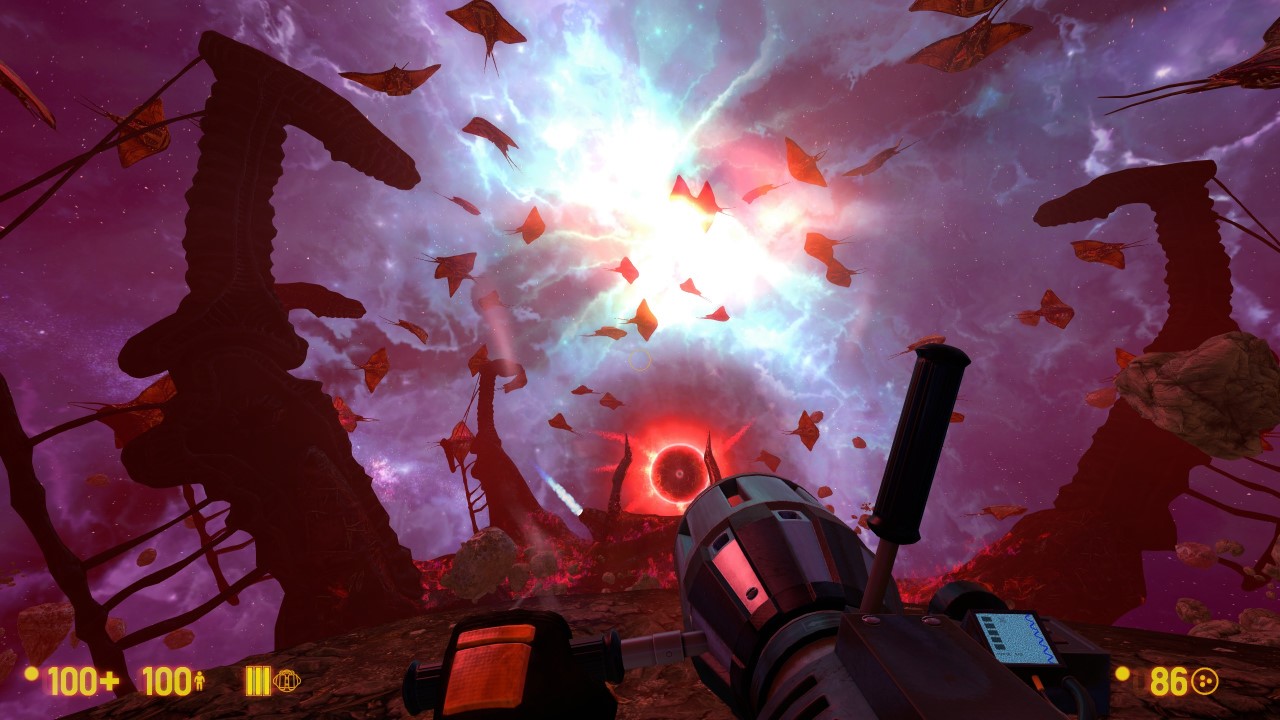 What had once been a whimper of a finale is now a fantastic conclusion to Gordon Freeman’s first foray. Personally, Xen is my favorite portion of the game now, and upon completing Black Mesa I fired up Half Life 2 to keep the train rolling. It made my soul ache knowing there wouldn’t be a Half Life 3 to follow, but with Half Life: Alyx around the corner Black Mesa has reinvigorated my adoration for the franchise.

There remain a few issues with the title, most born from the Source engine and underlying Half Life 2 DNA that hasn’t aged as well as other portions, but Black Mesa is easily the definitive Half Life experience. Fans will adore the lovingly recreated levels and enhanced gunplay, yet new players will be as equally impressed by how well the original game now leads into Half Life 2. Black Mesa didn’t just make Half Life better, it reinforced the franchise as a whole. It has established a greater sense of flow and cohesion between the two titles, which the original title lacked.

Now is the best time to jump into Half Life if you haven’t before, and if you’ve formally walked in Gordan Freeman’s boots then Black Mesa will set your heart a-thrumming in anticipation for Half Life: Alyx and whatever is to follow. Black Mesa may show its age in some areas, but that doesn’t detract from what is an otherwise stunning achievement. It’s not only Half Life at its best – it’s one of the finest shooters available today.