The standout spiritual successor to The London Heist. 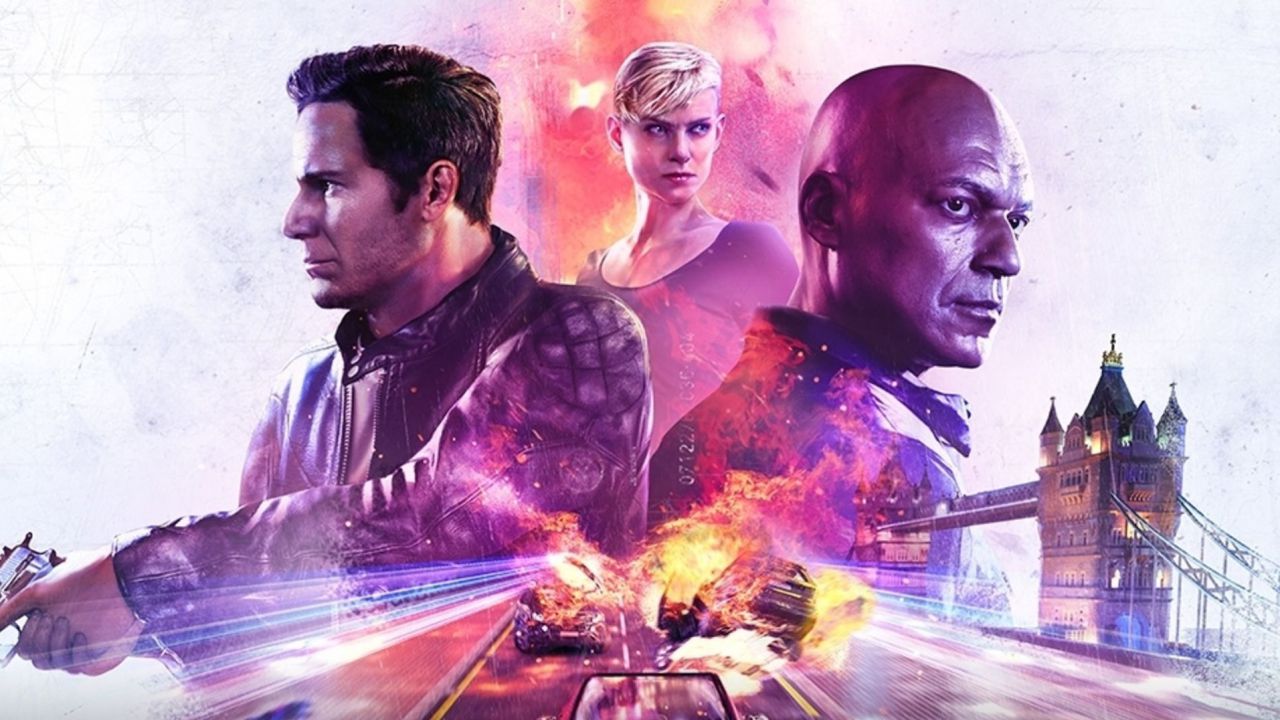 PlayStation VR Worlds was one of the first games a lot of people tried out when they first got their PlayStation VR, which included a number of different experiences to try out. One of those was titled The London Heist and came directly from Sony’s SIE London Studio, though the experience was very short and merely a tech demo for what PSVR could do. SIE London Studio has been working on their followup and it has finally arrived with the much more expansive Blood & Truth.

Blood & Truth puts players in control of the lead character Ryan Marks, a soldier who returns home for the funeral of his father and has to protect what remains of his family from a criminal organization that is trying to take over. The game begins with you being interrogated in the present by a character who is being portrayed by the always enjoyable Colin Salmon. The game then begins to flashback to moments in the past that start with an epic series of shoot outs and car chase scene that felt like something right out of a James Bond or Mission Impossible movie before shifting gears to some dialogue heavy segments that really set the story into place. A lot of games like this struggle to make the character interactions and lengthy exposition segments feel natural, but the script writing and voice acting really work well here. 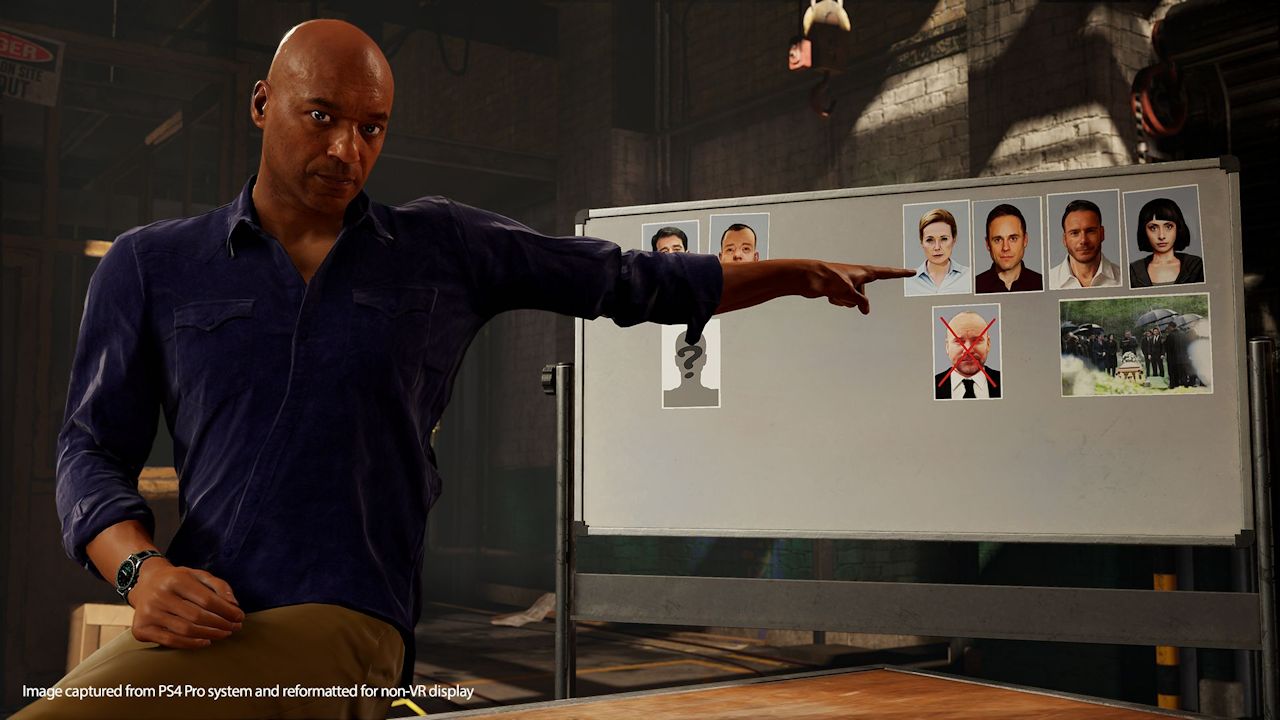 Built originally as a new entry in The Getaway series, Blood & Truth retains the London setting and it looks great as you make yourself through the seedy underbelly in the game. Early on you get to experience the more bright and colorful parts of the town before seeing the more drab dark areas. Regardless of which area you are in though, the game looks very impressive even with the limited fidelity possible in the PSVR headset. This is combined with what is a stellar soundtrack in the background that really helps to set the tone of the game from the very beginning.

Like many PSVR games, Blood & Truth offers two different controls schemes that you can select from in the game. These are to use either two PlayStation Move controllers or one DualShock 4 controller. The PlayStation Move option is obviously going to be the most immersive option of the two, with you able to control a hand with each one of the controllers. Sometimes the PlayStation Move can feel like it puts you at a disadvantage due to the last of a control stick, but the on-rails nature of this game allows it to work without much problem at all.

The DualShock 4 option also works quite well, with the only issue being it can feel weird controlling both hands with one only controller. This is handled by essentially splitting the controller in half, with L2 being used to grip things with your left hand and the R2 button gripping for the right hand. It can take a little getting used to at first, such as how to grab two lockpicks from your toolbox that is located on one side of the screen, but it works much better than expected. Where this can get a little annoying is that you cannot switch control types during the game to easily try them both out, though you can choose which one you would like to use every time you continue the game from the main menu. 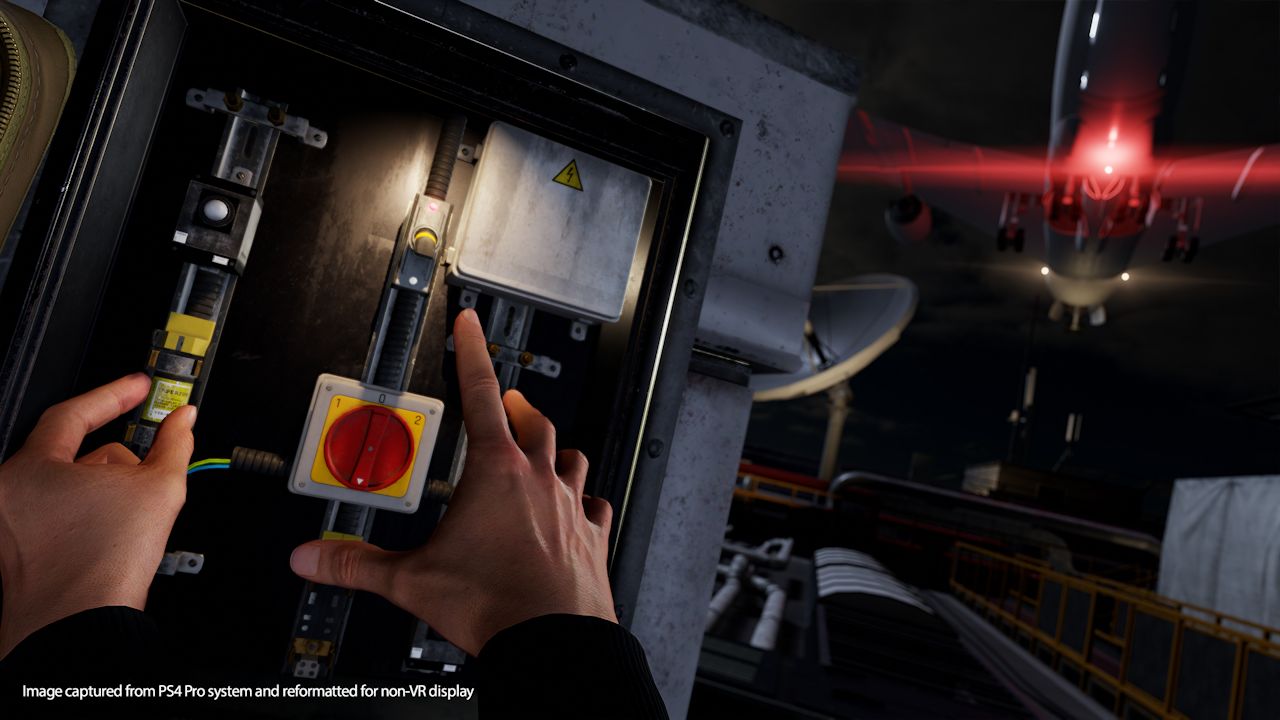 Blood & Truth offers much more variance in the gameplay than the limited The London Heist, with you being able to do many different things between straight up gun sections. The game utilizes a teleport ability, where you can move around the room between certain locations with ease rather than allowing you to move freely. Some moments are completely on-rails, but most of the game lets you at least move at the pace you choose by doing this instead.

You will start with your trusty pistol that you can outfit in your safehouse, complete with color and upgrades like a silencer. This adds a level of customization to the game that will keep you returning once you unlock additional weapons that you can upgrade as well. Within a level, you can grab and place your gun in its holster with the press of a button, which you may sometimes find yourself accidentally doing in very hectic situations.

Blood & Truth tries something very different than a lot of games by not adding any sort of target reticle for your gun while firing, which can make aiming a lot harder than you might be used to in other games. Once you pull your gun out, you must aim and fire, with often the first shots giving you an indication of where you have aimed and then adjusting from there to hit your target. Playing the game longer will allow you to get more of a grasp on the aiming system implemented in the game, but the lack of a target can definitely make the shooting feel a bit like trial and error most of the time until you really get the hang of it. 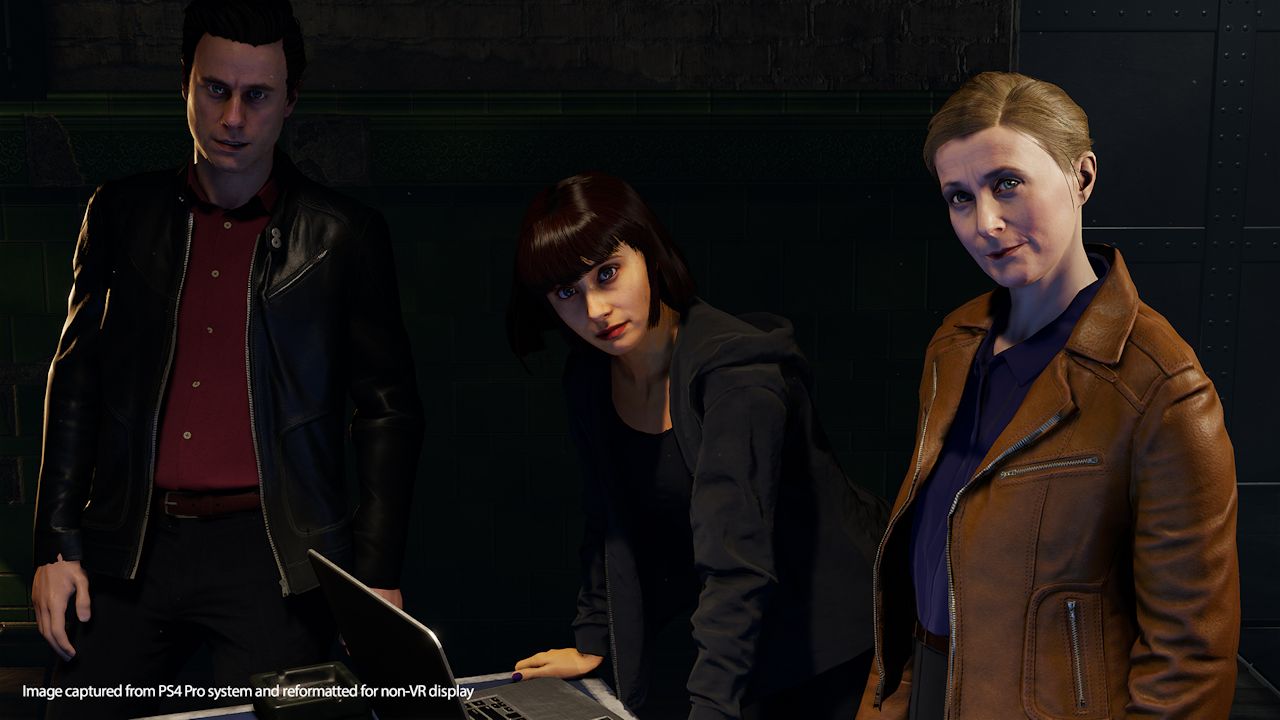 There are many other interactions you will have in the game than just shootouts, such as use lockpicks to open doors, climb up ladders, and much more. Many games would just have you be able to press a button to crawl down a crawlspace, but not Blood & Truth. Instead you must actually reach out with both hands and grab the panel in front of you to full yourself forward and so on in the game. This likely could be tiring for some people in longer gameplay sessions, though you likely won’t be playing this all the way through in one go.

Unlike a lot of PSVR games that still release today, Blood & Truth is quite lengthy, at least for VR purposes. Rather than the hour long The London Heist, Blood & Truth clocks in more around the 6-8 hour range across the game’s 19 chapters, with that length depending on if you get stuck in any sections while playing. The game does a good job at not making the player dizzy or nauseous with the cinematic nature of it, but it’s also probably not a good idea to play through the entire experience in one session either.

On top of the story itself, Blood & Truth also has challenges, such as Time Attack, that you can unlock in the game the more you play. This is joined by bullseye targets in the game that you can hit to earn extra stars for more unlockables as well, in addition to other random ways to earn stars in the game as well. There isn’t really a lot of extra content that will keep you coming back for more in the future, but there’s just enough to keep you busy for awhile. 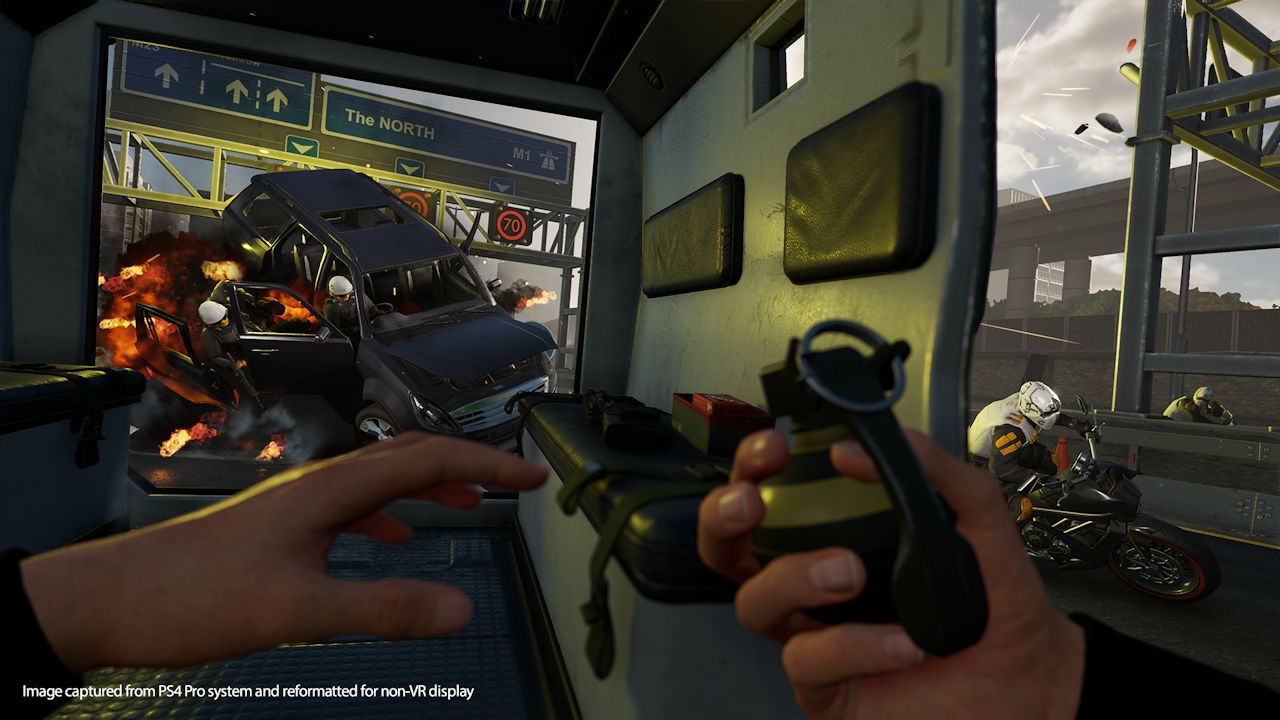 VR gaming can often be more about spectacle and showcasing the technology than in-depth gameplay, so Blood & Truth offers a more casual difficulty options as well known as Comfort Mode as a result. This mode is available for those that are struggling with the difficulty of the game and would rather just enjoy the story along the way. This is something that is quite helpful for a VR game, as oftentimes you just want to show somebody the potential of the platform without them having to dive into hardcore gaming sessions.

Since the release of PlayStation VR in Fall 2016, people have been asking for more full length VR games that are more than a couple hours experience. Serving as a spiritual successor to their early PSVR outing The London Heist, SIE London Studio’s Blood & Truth is just what the doctor ordered, with a well crafted story complete with good voice acting and immersive gameplay that combine for a true cinematic experience akin to something you’d expect from a spy thriller.

SIE London Studio delivers yet again with another must play PSVR exclusive in Blood & Truth, which combines a compelling story with very enjoyable gameplay in one of the best AAA VR experiences to date.