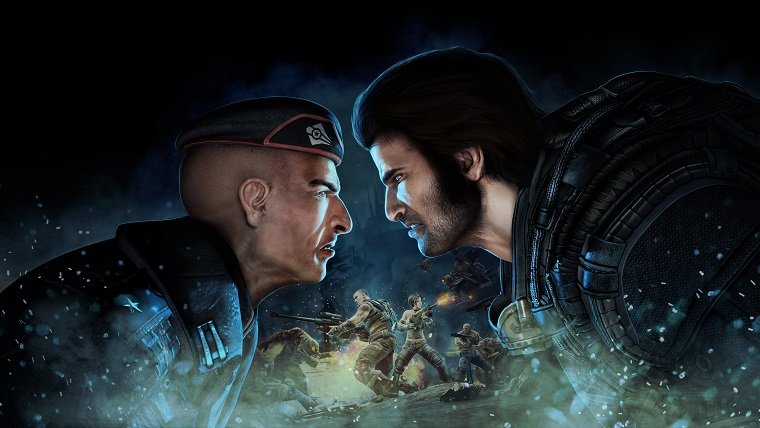 Originality is a rare trait for the FPS genre these days, but People Can Fly’s Bulletstorm had plenty of that to go around back when it originally launched in 2011. The crassness of its characters made its relatively brief campaign at times hilarious and other times a little annoying, but its emphasis on fluid and stylish gameplay made each combat scenario exciting. Now we’re here 6 years later with a remastered version called the Full Clip Edition, and I’m happy to say that the game has aged gracefully.

The game has received a visual overhaul with hi-res textures, increased polygon counts, remixed audio and smoother framerates to make this truly feel like a current-generation experience. In fact, in playing through the campaign I found it hard to believe that I was playing through a six-year-old game, with vibrant environments and gunplay that all feel right at home in the year 2017. Some of the character animations are showing their age a little during cutscenes, but during actual gameplay it all looks great. Serious credit needs to be given to People Can Fly for the new coat of paint they put on this game.

Of course, the visual enhancements aren’t the only thing that they brought to the table with this new package, as the Full Clip Edition also comes with what is called the Overkill Campaign mode. This essentially lets you play an unrestricted version of the game’s original campaign, with complete access to all of its weapons and abilities right from the get go. While I never had a problem with the way that the game gated certain content previously, this is a great addition to the package that veteran players will appreciate. The score-based Echo mode is also back with six new levels, challenging you to get high scores and complete certain objectives. All previously-released DLC and the co-op multiplayer Anarchy horde mode are also all here, making this is a very solid bang for your buck. 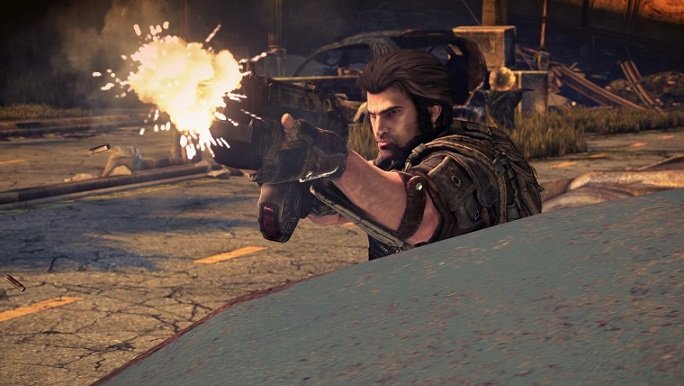 Bulletstorm is a shooter that’s entirely focused on having you kill your enemies in some of the most stylish and brutal ways you can think of. These are called “Skillshots,” which the game will challenge you to do throughout each combat scenario in order for you to be able to upgrade your weapons and buy more ammo. While you can pull off some satisfying ones like shooting an enemy in half for the “Topless” Skillshot with basic weaponry, it’s the game’s fluidity and unique weapons that allow this system to truly shine. Much of this is based around the game’s energy leash, which allows you to grab enemies from afar and whip them towards you, causing them to move in slo-mo in front of you for a few seconds as you decide what you’ll do to them. You can give them a boot to send them flying into a cactus, off the map, or into a crowd of enemies that you can then incinerate with a nearby explosive barrel.

The game constantly offers new ways for you to dispatch your enemies and new challenges for you to complete, which funnel into the game’s addictive upgrade mechanics. There wouldn’t be much purpose in pulling off more than a handful of these Skillshots normally, but seeing as they’re all linked to getting you bigger and better weapons makes you want to figure out how to pull off each and every one. Successfully performing one will greet you with a pop-up displaying the Skillshot’s often-hilarious name (such as Boned, Rear Entry and Pancake), with the accompanying score adding to your overall total of Skillpoints that you can spend at upgrade stations called Dropkits. Flinging an enemy into an electrified billboard or sliding into them and then showering them with bullets as they soar through the air never gets old, and discovering and mastering new ones is a rewarding gameplay loop.

The gratifying Skillshots are matched by the game’s diverse arsenal of weapons, which offer guns that are more traditional and some that aren’t. You’ll get your feet wet with the PeaceMaker Carbine assault rifle, but the game also offers weapons like the Flail Gun that fires chain-linked grenades and the Bouncer that fires bouncing cannonballs. These weapons can also be upgraded to offer secondary modes of fire, with charge shots giving you even more ways to dispatch your enemies. The game’s difficulty also scales well as you obtain more powerful weapons, allowing you to feel like a badass without becoming a one-man army. You’ll typically have one or two companions along with you for the ride, and the AI does a decent enough job of providing backup and staying out of your way most of the time. 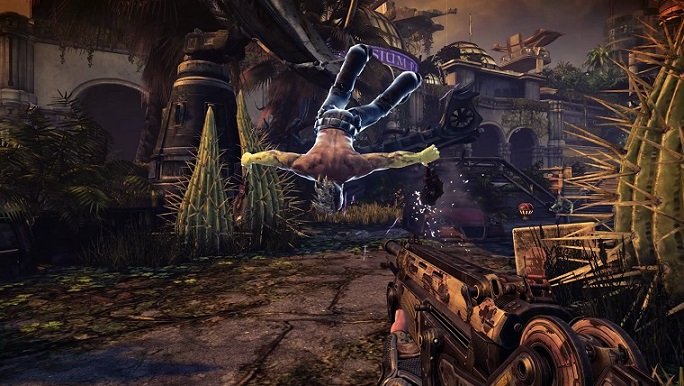 Story-wise is where the game comes up a little short, with the game’s plot of vengeance being entertaining if not all that memorable. You control a member of the Dead Echo army named Grayson Hunt, who is being ordered by General Sarrano to eliminate people that Hunt soon finds out are innocent. Enraged, Hunt vows to track down and kill Sarrano while escaping from the planet Stygia they crash-landed on. As mentioned briefly previously, the game’s characters have no qualms about using every swear in the book. This can get old at times, but overall it gives the game an over-the-top charm that sets it part from the crowd. The story itself does just enough to keep you interested for the ride, but it definitely isn’t as engaging as the gameplay.

For those of you who pre-order the game, you’ll get the added bonus of being able to control Duke Nukem for the campaign. They literally just swap him into Gray’s place, with all of the other characters in the game still acting like he is Gray. While this could have been lame, the developers actually made it really funny with Duke constantly baffled why everyone keeps calling him Gray. John St. John also provides full voice support for the character throughout the entire campaign, sometime repeating things that Gray originally said and other times adding his own flavor. Seeing as the game was already crude, adding Duke Nukem in makes perfect sense and actually works really well. He controls exactly like Gray does, but you get the added bonus of Duke one-liners to spice up the experience. It’s too bad this a pre-order bonus, though, as it really should have been included with the base game.

Bulletstorm: Full Clip Edition is easily the definitive version of the game, and if you’ve never picked up the game previously then now is the perfect time to jump on board. Its fantastic Skillshot system and unique weapons make it still feel fresh six years later, and People Can Fly have done a great job touching it up for modern hardware. The previous issues still apply, but overall it’s a stylish FPS that fans of the genre looking for something outside of the box should enjoy.