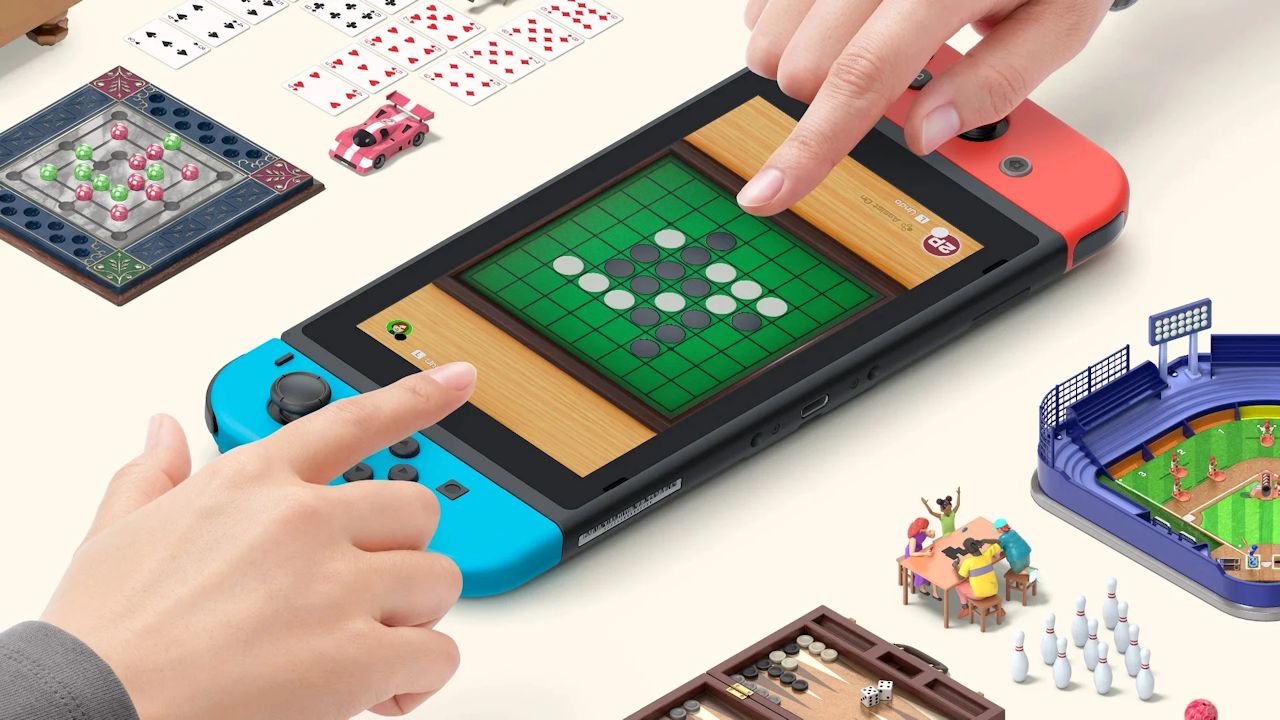 Games have evolved dramatically over the years as a result of all of the new technologies that have become available, but sometimes people just want to go back to the simple classics they grew up on. Clubhouse Games for the Nintendo DS perfectly captured this idea by offering players 42 different games based on board games, card games, and more. As a result, this game became a fan favorite on the DS and has had people asking for a follow-up. Now nearly 15 years later, Nintendo has finally delivered with even more games to choose from in the sequel titled Clubhouse Games: 51 Worldwide Classics.

The original Clubhouse Games was known for not only its number of games, but the overall variety offered in the game. That has now thankfully carried over to the sequel as well, where players have 51 actual games to choose from, with many different genres of games being offered across all of these.

Clubhouse Games: 51 Worldwide Classics really wanted to tap into the “Worldwide” part of the title right from the start, as your first step is to create an avatar to share with others around the world. There is very little customization here, but that’s not really something you need in this game, as you’re literally creating a board game looking character figurine. You also have to select your favorite food and your heart’s desire from a limited list of options, which show up in your character profile. The main reason for this though is that your figure and associated details is your online avatar that can be accessed from an area known as the Globe Guide. 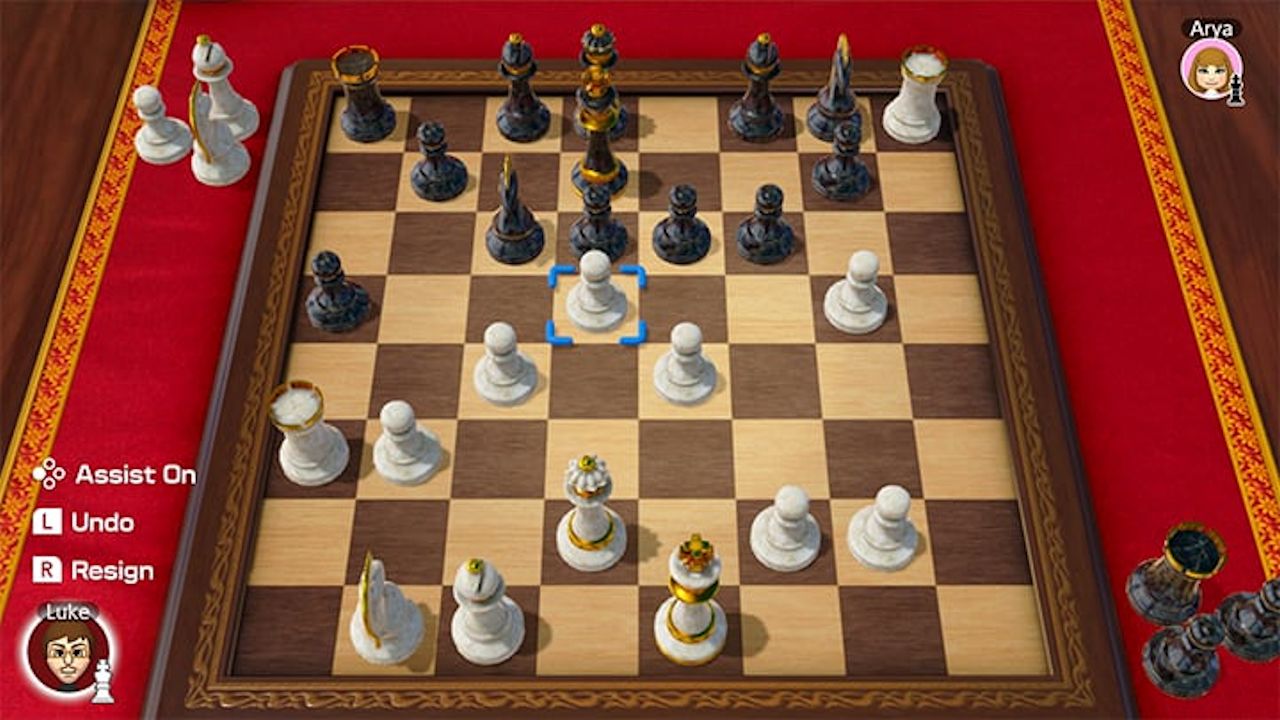 The Globe Guide serves as the game’s map hub, where other avatars are placed all across the globe. The default setting here is to have AI only characters known as guides show up, which provide you some history about various games and regions. They also have recommendations for certain games based on their bit of information, which can be helpful for those struggling to figure out what to play. Where this gets pretty cool is when you change the category search from “Game Guides” to other options, such as “20 with My Favorite Food,” “20 with a Similar Medal Count,” or simply “Friends.” With this, you can either look at other player’s recommendations or even invite players to play with you online as well. It’s certainly not the most robust hub in gaming, but it does the job here.

While you can utilize the Globe Guide to find the different games to play in Clubhouse Games: 51 Worldwide Classics, a much simpler way to access it is via the normal game select screen. This screen allows you to jump back to the Globe Guide at anytime, with all the games laid out in order from left to right beside this option. In comparison to the original, this game layout is a bit of a downgrade overall, as the placement of the games is nowhere near as well organized as before. Even though the games are mostly next to other similar options, the long scrolling could have been simplified with a sorting option. In addition, some of the games feel out of order, such as three Solitaire options being separate from the rest of the card games.

Clubhouse Games: 51 Worldwide Classics really shines with its number of games and the variety presented between. While the fan favorite Hearts is missing, there’s so many great games included in this collection, some that may have been household staples for you growing up and others you may not have ever played before. 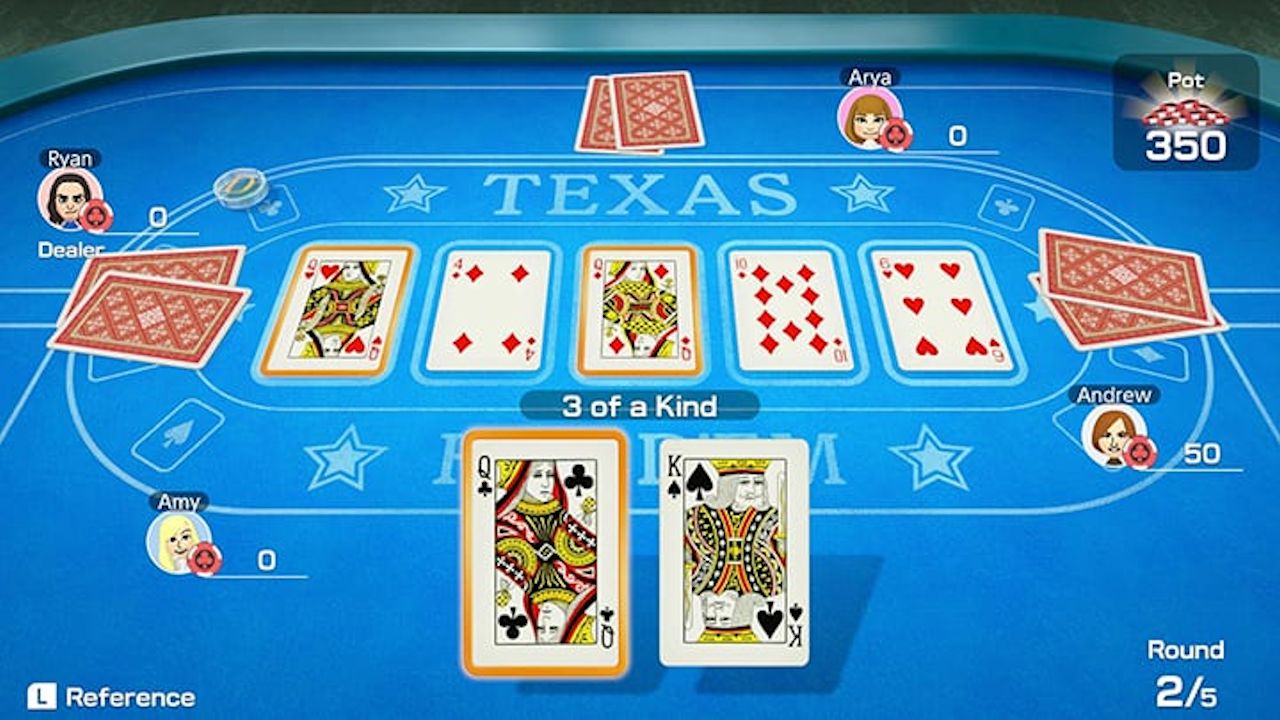 Board games are aplenty here, including games like Checkers, Chess, Backgammon, and plenty more. Just like mentioned above, the game choices really reflect the “Worldwide” part of the title, as offerings like the Japanese game Shogi are included. This also extends to the card game options as well, where you not only have obvious inclusions like versions of Solitaire and Poker, but also Hanafuda and Mahjong. A game like Hanafuda especially is something most outside of Japan would probably never play otherwise, so actually learning how to play more obscure games is a lot of fun.

With more niche games that people may have never played like Hanafuda, the game had to implement some sort of tutorial system. Whenever you start up a game for the first time, you will be presented with a short tutorial showing the basics of the game as told by a few of the figurines in the game. These can be a bit cringeworthy at times due to the weird voice acting, along with them not always being the most informative. The good news is that there are further instructions that you can access within each game though.

Besides the wide selection of board and card games to choose from, Clubhouse Games: 51 Worldwide Classics also has numerous games that you can’t really nail down to just one category. These include games like Billiards, Darts, Bowling, Golf, Air Hockey, and Toy Boxing among a number of others. The control schemes of these games can vary, with some using motion or touchscreen controls in handheld mode and others using physical controls. On top of these, the game also includes somewhat of a 52nd game with the Piano that even has a hidden Synthesizer mode that you can play around with as well. 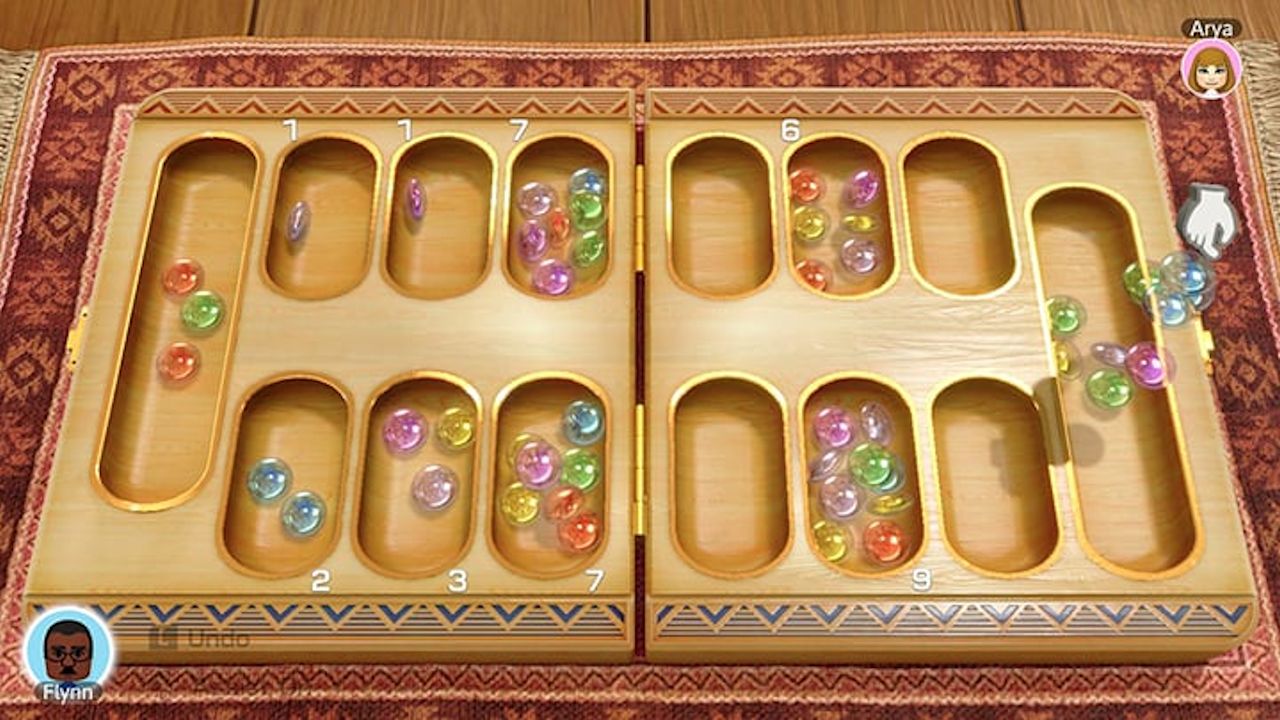 Not only do you have all of these distinct games to play, Clubhouse Games: 51 Worldwide Classics also has a lot of longevity built into each individual game. While it was disappointing to not see the return of Stamps or Mission Mode from the original, each individual game has their own challenges for you to complete. These vary depending on the game, with some being as simple as beating four different AI levels of difficulty, while others are reliant on scoring instead. Doing this will then add an icon next to each game on the selection menu to show what all you have completed for the respective game.

Besides the few player only games like Solitaire, you are almost always going to playing against an opponent of some sort in Clubhouse Games: 51 Worldwide Classics, whether that is an AI opponent or a real life opponent. Having terrible AI could have really ruined the single player aspect of the game, but the AI found here is actually really quality and scales well with the different difficulty options.

Playing the games with others though is where the game really shines, including the numerous options you have. Both local multiplayer and online multiplayer are options here, with the latter allowing you to match up with friends or random players from around the world. Local multiplayer is where you have tons of options though, as you can either play against once another on the same system or even use multiple Nintendo Switches. 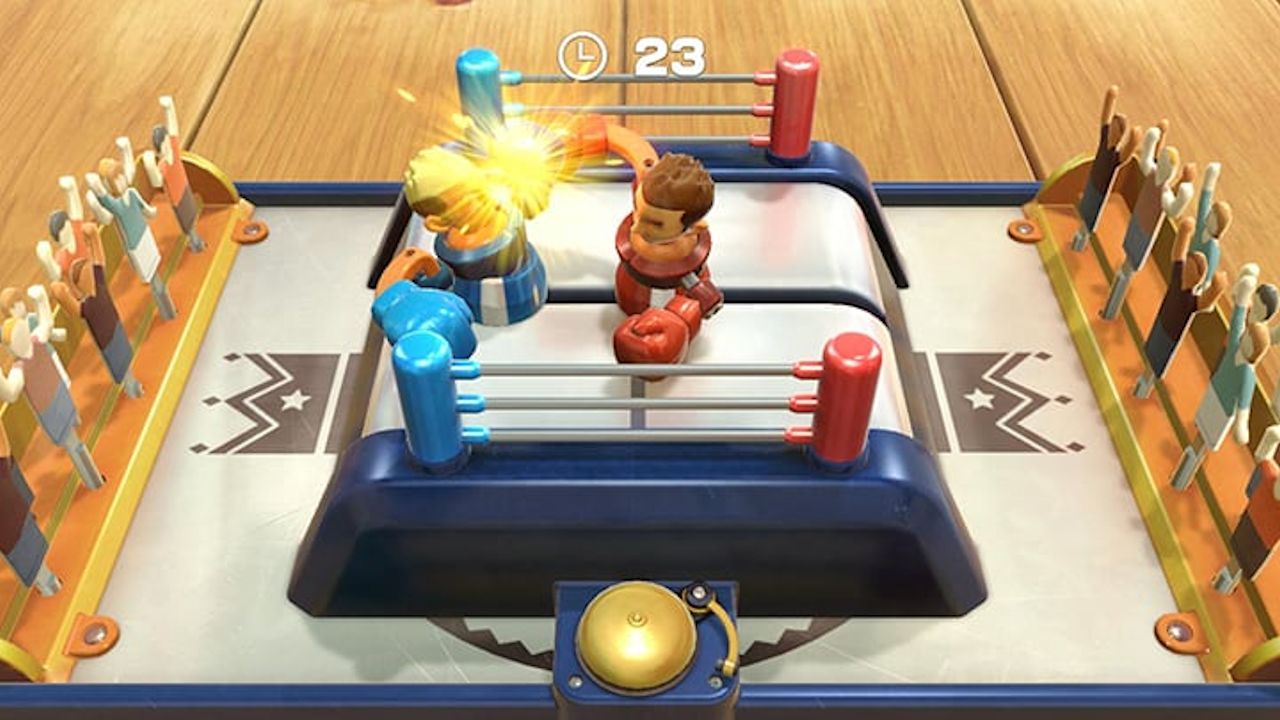 Clubhouse Games: 51 Worldwide Classics takes a step back to the DS era too by offering a feature rarely seen these days, which allows you to share the game with other Nintendo Switch systems locally even if they do not own the game. This means you could have a group of friends each with their own system and all being able to play together without everyone having it. Even if you only have one system to share, there are a bunch of games where you can actually play against an opponent using the touchscreen in portable mode by turning the system sideways. This is the type of thing the Wii U was supposed to utilize and failed to pull off, with this game proving it does work well.

The Nintendo Switch may already have variations of a majority of the included games spread across multiple titles in the eShop, but none of them are as complete a package as Clubhouse Games: 51 Worldwide Classics. Even though it is missing a few features from its predecessor, the hours of genuine fun that this game can provide both in solo or multiplayer modes more than makes up for it in what is a very faithful follow-up to a Nintendo DS classic.