Will Cult of the Lamb convert you?

In Cult of the Lamb, leading a cult is all fun and games. Developed by Massive Monster and published by Devolver Digital, Cult of the Lamb is a new triple I indie game that pairs roguelike with life sim. Basically, they’ve invented a new genre called cult-like-sim.

Cult of the Lamb will have you start from nothing, get chosen by The One Who Waits, build your own cult, and cut down the dissenters and false Bishops that stand in your way. The journey from sacrificial lamb to God among men (or various animal followers) is filled with the perfect blend of light-hearted cultism, mythological writing, and an addicting gameplay cycle. This review has light spoilers until the “Time for a Story” section, where there are heavier spoilers from then on, except for the final “Verdict” section. 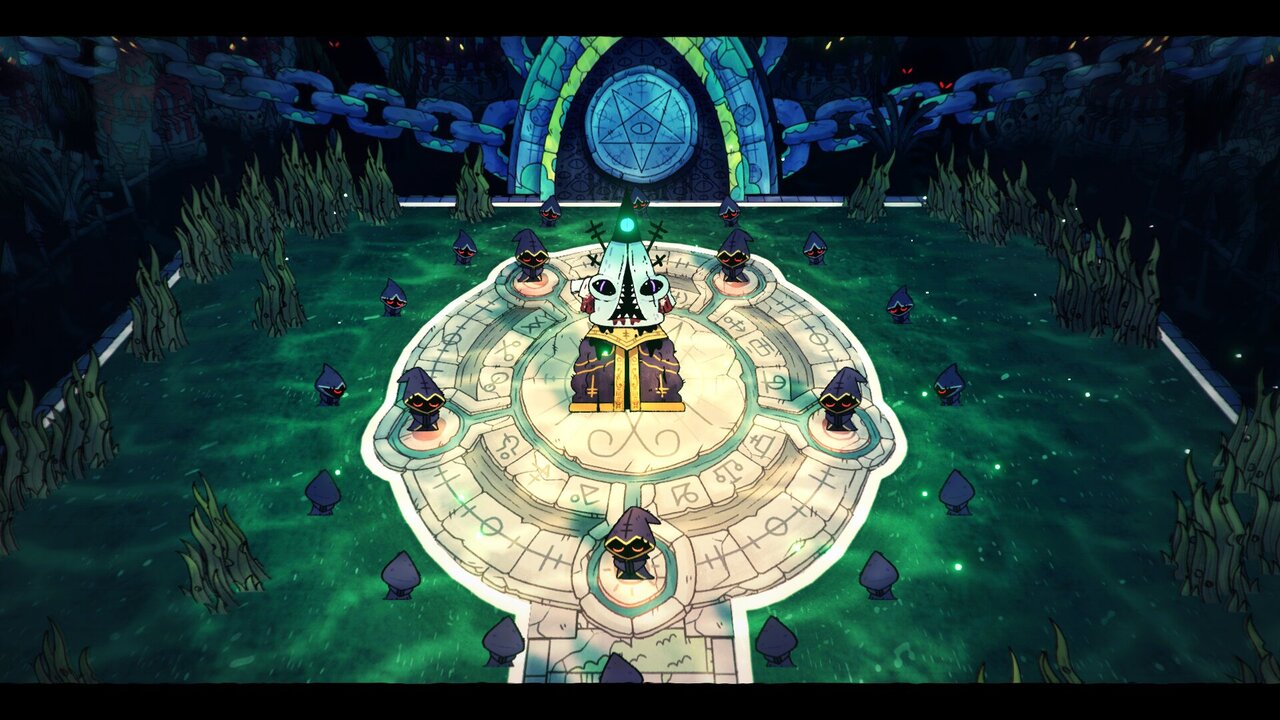 Praise Be the Gameplay!

The combat in Cult of the Lamb is something that stays consistently smooth, crisp, and gratifying. The action is fast-paced and the animations are unmatched. As you adventure on Crusades, the combat remains simple, yet solid. When you enter a new room, enemies fall from the sky as you roll, slash, and use your ranged Curses to strike them down. Once you find the difficulty setting that fits right for you, Cult of the Lamb offers one of the best combat experiences of the year.

The hooks of Cult of the Lamb lie within the game’s perfect combination of roguelike and life-sim. When you aren’t tending to your flock, you’re on a Crusade gathering more followers and resources. When you aren’t Crusading through the Cursed Lands, you are increasing your follower’s faith and devotion and expanding your cult. Each and every action you do is rewarded with progression through the story, progression for your character, or progression for your cult.

And, if you couldn’t guess, Cult of the Lamb has numerous progression trees that are all organized and welcoming. Because of that, the game is able to draw you in to play just one more run or wait one more day to get just a little more devotion to upgrade your colony. Each progression tree feels purposeful; however, some feel a little more sparse than others which leaves a bit to be desired, especially when it comes to the upgrading and customization of your cult base.

Another fun gameplay mechanic that doubles as player and cult progression are the collectibles. There is a lot to discover, but each collectible set isn’t too hard to complete. Through Commandment Stones, Holy Talismen, tarot cards, follower forms, Divine Inspiration, and much more, Cult of the Lamb sucks you in and makes you feel the growth you’re making. 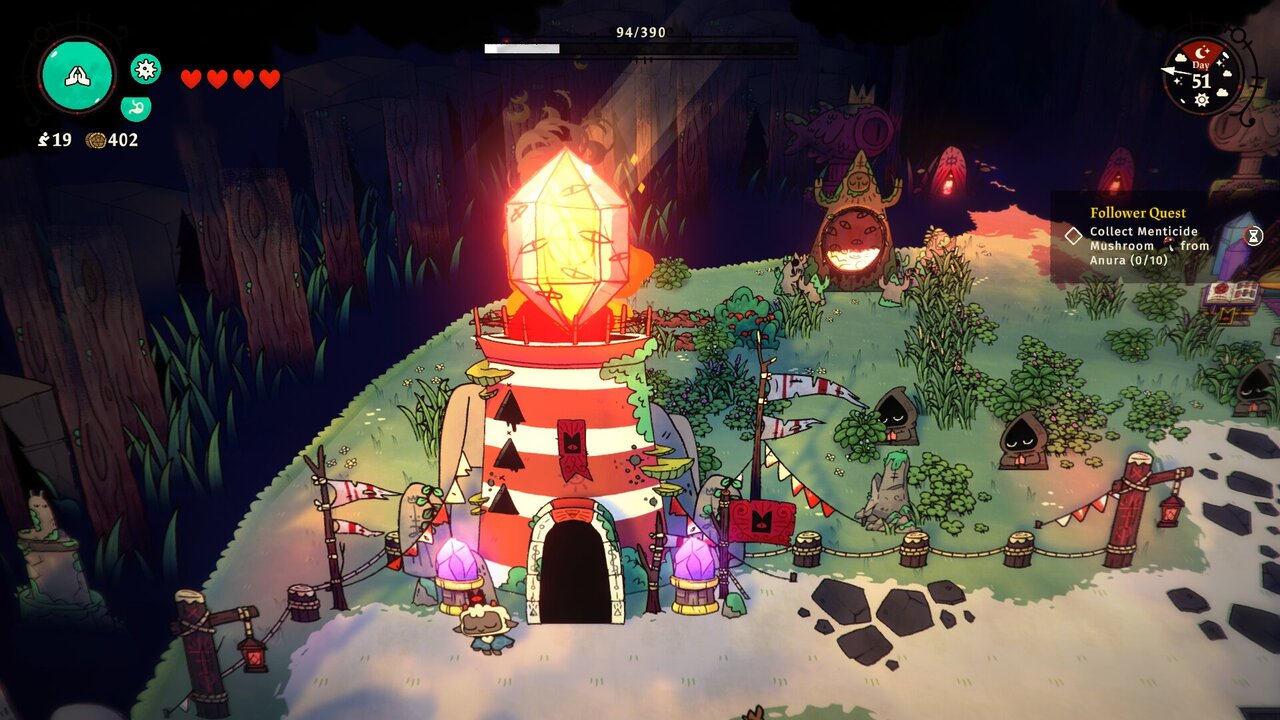 Cults Are a Vibe

If Hades and The Binding of Isaac had a child, it would be this game. While it is uniquely its own thing, Cult of the Lamb’s art, gameplay, and tone feel distinct but familiar. Massive Monster masterfully married the ritualistic and macabre tones associated with cults with an abundance of bright colors and cutesy animals. One minute your lamb will summon a tentacle from a dark portal that sucks one of your followers through an inky rift below and the next, you’ll be sowing seeds and dancing around a bonfire.

The art is mesmerizing and makes playing the game a treat. The Bishops, with their multiple black eyes, fury frames, or rows of teeth, are all unique and terrifying and each follower form is customizable and cute. The music is also very chill and never gets old, even with the rinse and repeat nature of Cult of the Lamb. All in all, the gameplay and the art style of Cult of the Lamb are extraordinary and worth experiencing. 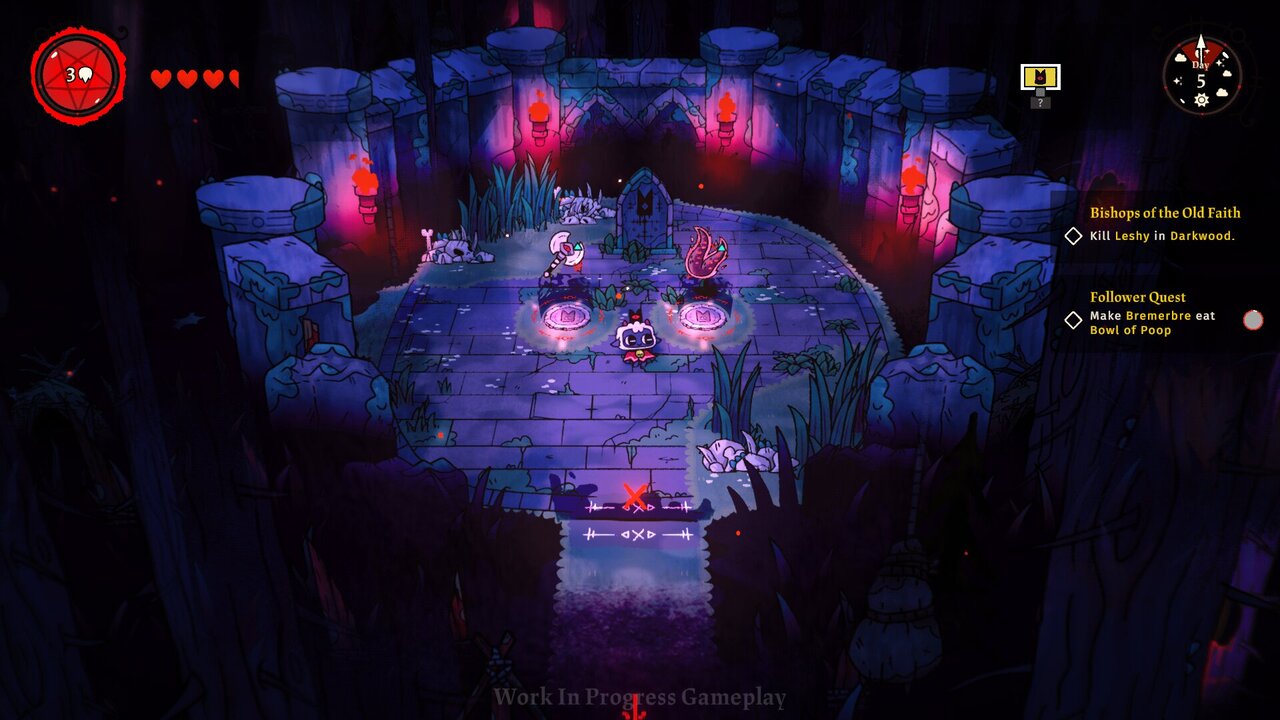 Time for a Story

Though Cult of the Lamb’s gameplay and art style is incredible, the story that is told is predictable and a bit shallow. The writing is impressive for a game of this size, featuring the same cute/cult tone as discussed previously, and all of the many NPCs are interesting if a bit forgettable.

The biggest shame is that the main story of you getting saved by The One Who Waits, overthrowing the four Bishops one by one, and inevitably rebuking your savior isn’t anything groundbreaking or surprising. But that’s not such a bad thing when the gameplay, tone, art, and music are as good as they are. Also, there are a few story nuggets hidden in the side quests, but those are only accessed by those looking to 100% the game. The End is Not the Beginning

Speaking of 100%-ing the game, Cult of the Lamb only takes about 15 to 20 hours to beat and not much longer than that to 100%. With its natural comparisons to Hades and The Binding of Isaac, it is a huge bummer that Cult of the Lamb isn’t an endless game with lots of replayability.

Aside from polishing off each collectible set, there is no endgame to Cult of the Lamb. There are no timed challenges or secret bosses. Once you have finished the game, there isn’t anything else to do except for starting a new game and going again. And because the gameplay and atmosphere of the game are so good, it stings even harder that you aren’t able to continuously play Cult of the Lamb forever.

Granted, there may be updates and DLC that come to the game later on that offer replayability and an expanded endgame. For now, it is sadly a very quick game, which is okay, just unorthodox for a roguelike. Though Cult of the Lamb is a very fun game, its current state most likely won’t earn it a cult following. It’s Lonely at the Top of a Cult

At the end of the game, having a big base full of followers and synergized workflow feels a bit hollow, pointless, and undervalued. A Clash of Clans-esque PvP mode that pits multiple cults against each other in a base building and destroying fashion would solve that issue and then some. There could be higher-tier God bosses that multiple lambs could team up against in endgame Crusades. At the very least, multiplayer could’ve been integrated into Knucklebones. Needless to say, multiplayer could solve a lot of my Cult of the Lamb wants and desires. 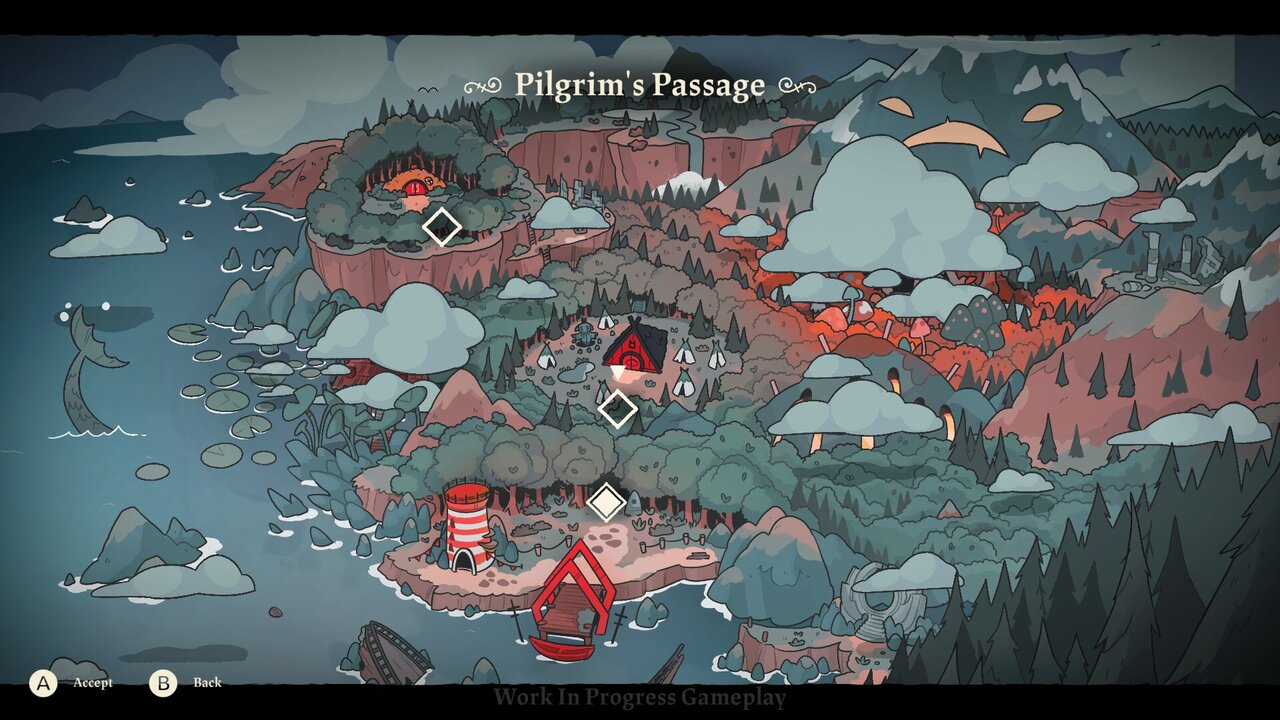 Finally, Cult of the Lamb can be seen as a bit repetitive. I personally think the time spent during the cult building part of the game makes you crave the Crusades, and the end of a Crusade makes you crave attending to your cult, but some may find the four Cursed Lands and samey bosses repetitive.

The last few nit-picky things that I think would have pushed Cult of the Lamb above and beyond are cinematics and an open world instead of an overworld. If there were animated cinematics to introduce boss battles or to introduce new areas, a certain wow factor would be introduced that would tie the game together. Also, Cult of the Lamb would feel more connected if you could run over to the Pilgrim’s Passage and other places in an open world way rather than through a fast-travel overworld display. 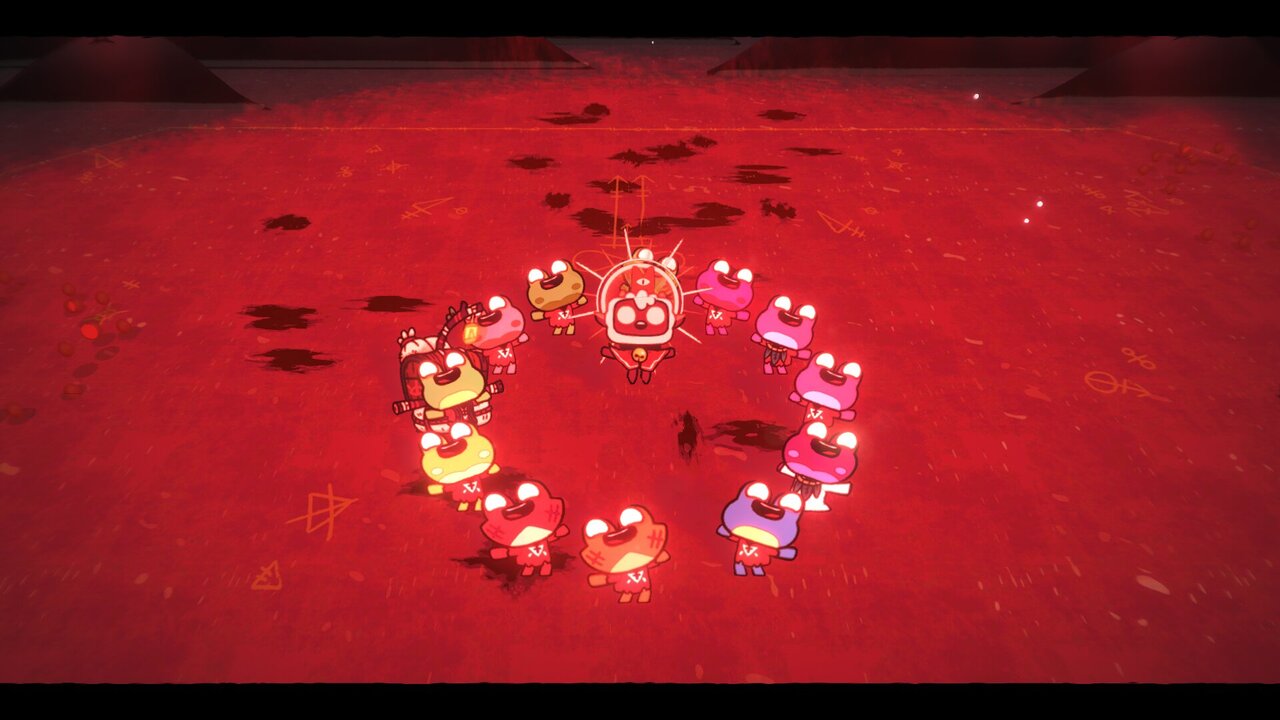 Cult of the Lamb is a fun and worthwhile experience, just an experience I thought that I’d be able to get over and over again. Though it is cut too short, building a cult full of my favorite animal, crusading through lush environments, and vibing to the art and music is a perfect weekend retreat, even if it doesn’t last long enough to convert.

Attack of the Fanboy / GAME REVIEWS / Cult of the Lamb Review