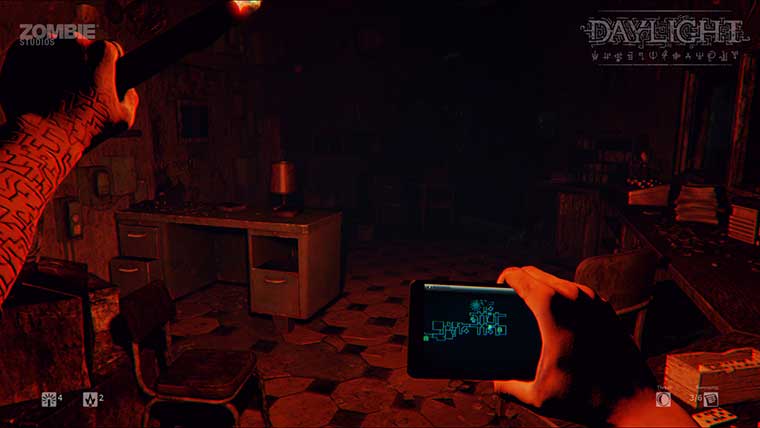 The last few years have seen their fair share of jump scare horror games. They all follow the same premise. Stick a player in the first person view, drop them in a dark and dingy locale, bombard them with sights and sounds that evoke fear. The formula is pretty straight forward, one that Daylight follows to the letter. Though Daylight does have an interesting twist. That twist, is that the game is procedurally generated, meaning that no single play through is ever the same.

Awaking in an abandoned hospital, with only your phone as your light source, you’re tasked with making your way out of this hospital of horrors. There’s actually very little by way of story telling from Zombie Studios, there’s certainly little set-up as to why you are here. What little color is added to the story comes via collectible notes that litter the world as progression tools called Remnants.  In a nutshell, Daylight is a series of random levels that asks you to collect these Remnants while wandering around dimly lit corridors in anticipation of the next jump scare.   There’s an interesting set of gameplay mechanics that are built around survival and collecting items to help you do so.  Digging into Daylight means reading a lot notes left behind by the hospitals former employees, and there’s no shortage of that.  There’s just not enough detail in the environment to sell the story being told by Remnants.  Nor is the gameplay compelling enough to stand on its own.  What payoff there is, comes late, and does little to make you want to go back for more.

As expected, there’s no shortage of spooky moments in Daylight, but being procedurally generated has some side effects on the game. Daylight does its best scaring when you aren’t accustomed to the rules of the world. Once you are, its very easy to anticipate these moments that are intended to scare you. And when the scares stop, Daylight just becomes a first person maze simulator, relying on some rote elements to keep tension high. The nature of procedural generation is that you never know what you’re going to get. You could get a clearly laid out maze to traverse, or something nonsensical. Regardless of what the game gives you, your objectives are clear. Discover six Remnants, and then take a key to the next door to open up a new level. The procedural generation also gives a lot of the game a very samey feel. It’s hard to monitor your progression at times.  Outside of some varying environments in the closing minutes, Daylight reuses a lot of the game’s assets. Your progression through the 3-ish hour campaign is filled with corridors and areas that look almost identical to one another. It can make finding what you’re looking for not only painfully dull, but uneventful.  Change painfully to brutally, if the scares have stopped at any point.

Levels being hard to conceptualize isn’t so bad in Daylight. The game doesn’t make you memorize each level’s layout.  You’re afforded an ever-expanding map on your mobile phone, which acts as your default source of light as well. Each level has you tracking down these remnants with colored markers for some, while some are hidden deeper in the game’s exterior, that can only be discovered by using glow sticks. The glow stick mechanic and visual effects aren’t bad at all, and being a limited resource, you’ll need to constantly be using them to find other glow stick or flare caches found throughout each level.   It’s the primary mechanic of the game, but it really feels like there was a missed opportunity to make resources more scarce in general.  On the default difficulty, it felt like there was never a time when running was the only option.  I seemed to always have an ample supply of flares and glowsticks to continue my mission.

As you progress through each level in Daylight, your senses will be assaulted. Music and environmental queues are clearly intended to set the mood, and they do a good job of building to a crescendo when a Shadow attacks you. You have two options. Running is one. The game tells you to run when you encounter an enemy, but you can stand your ground and banish them with a flare as well.  While these enemies are easy to dispatch, the build up to each encounter does what it’s supposed to do.  It’s supposed to scare you, but after a few times, I went from scared to startled, startled to unfazed, and unfazed to bored.   Though the first couple of hours of my first playthrough of Daylight was a pretty tense experience. With little frame of reference, Daylight is a very creepy game that will undoubtedly trigger jump scares as it’s intended. Though as it wears on, you ultimately feel more powerful than the forces conspiring against you.  And when you feel more powerful, the scares tend to stop.  The audio queues began prepping me for an incoming attack, and while the sound design is great, these audio queues had me ready with my flares almost instantly.  Only when the game changes things up slightly do things get interesting, and it just doesn’t happen enough.  I never felt in danger, and the two times that I died in my first playthrough felt like they were from input error, or because of the time it takes to get out and light a flare.

Daylight stays cryptic until its closing moments, and the payoff isn’t all that great.  The game attempts to both make you care about a story that’s been nonexistent for the entire experience, and fulfill some semblance of story at all, in one fell swoop.  It’s just not enough of a payoff.  At one point I thought the game was just going to loop back into the beginning as some horrible awful dream that you can’t escape, and that would have probably been better than what we were left with when the credits rolled.

Daylight alleges to alleviate the replay problem for games of this type.   It certainly does that with its procedurally generated world.  The problem is, I don’t think Zombie Studios makes a compelling enough argument to play again in either the story or gameplay department.  Daylight will be available on April 29th for the PC and PlayStation 4.