Better tech in a different time Death Stranding was one of the biggest PS4 exclusives of last year, possibly of this entire console generation. But as the very concept of an exclusive has been reshaped over the last few years, the game was promised to have a PC release eventually. Featuring all the usual upgrades from shifting toward the more open and often more powerful platform, those who couldn’t play the game on PS4 are in for a treat now that that PC release has arrived. But how much has been improved? And how different does it feel playing Death Stranding just a few months later? The answers differ, but there’s no question that PC offers the best way to play this often divisive but always intriguing game about bringing humanity together in the face of crisis and fear.

For the most part the PC release is the same as it was on PS4, so you should check out my original review for the base details. If you haven’t played Death Stranding before it is something you will struggle to understand and adapt to as Kojima’s team takes you on a 30+ hour journey through a supernaturally broken world. In short, you play as Sam Porter Bridges, portrayed by Norman Reedus, as he works to unite the country after an apocalyptic event called the Death Stranding.

The worlds of the living and the dead have become muddled with spectral creatures called BT’s forming within a couple of days after anyone’s death. If these BT’s come into contact with a living human they create a voidout which results in a massive explosion. Of course, this has led to humans sequestering themselves and locking down all access to the underground cities that have formed, dubbed Knots in the game. With this premise Death Stranding spirals and expands, introducing interesting and unique characters along with a deep and engaging story. But as you can see in my original review, not everything worked out the first time. 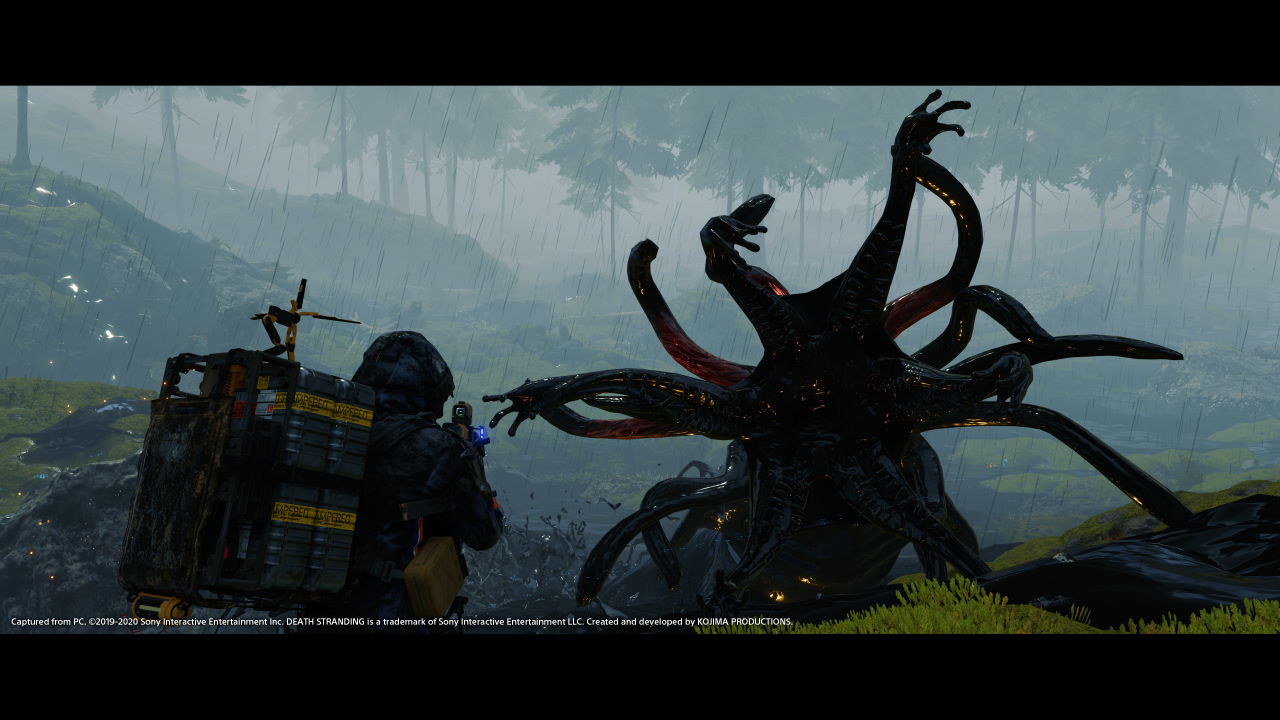 One of the other things that’s clear playing Death Stranding again on PC is that the game’s strengths and weaknesses have all been enhanced in the intervening months. Coming back to the game I expected to immediately “get” the story more than I did the first time through. Surprisingly all I felt was that the issues I had the first time, that the story unfolds in needlessly complex ways that don’t enhance the themes or plot, is even more true now than it was on PS4 in November.

Its gameplay remains the same in all the ways that matter. It’s still almost exclusively fetch quests, traversing massive stretches of diverse landscape to deliver packages. While parts of this feel somewhat more enjoyable, with an almost hypnotic and relaxing rhythm coming together between traversal and environmental/character improvements, but playing it now does not take away the sense of frustration caused by some of the core mechanics. And having to trudge through the opening hours again, knowing where the game ends up, was much tougher as it felt like the good parts were too many hours out of reach. While improvements have been made via updates both to the PS4 and PC versions, such as a quick skip for some of the smaller cutscenes, there’s still too many needless clips or menus you have to navigate through to perform even minor tasks.

Conversely, Death Stranding’s overall strengths, its world design and technical presentation, are gloriously enhanced on PC. PS4 Pro allowed for limited 4K gameplay, but PC unlocks the gates completely. I was able to experience the game in 4K at a solid 60fps set to maximum and it looks and feels fantastic. However, the options menu could be more robust. While impressive options such as ultra-wide monitor and DLSS 2.0 support are in there, those who like to fine tune the graphics might come away a little disappointed. The world of Death Stranding was already a wonder to behold and the PC version amps that up even more. But what feels even more different this time is just how all of this comes across to the player.

Like so many of Hideo Kojima’s previous projects, Metal Gear Solid 2 especially, Death Stranding seemed to arrive before its time. Hitting PS4 back in November 2019, the game was quickly seen as a truly unique experience, but also a befuddling one. The game has the trappings of an action experience, but plays quite differently. And its story, about a globe shaking event that forces humans to separate from one another for fear of contact leading to potential death, felt like it might be prescient, but who could have guessed just how quickly it would come to pass. While it wasn’t Kojima’s original intent, instead seeming to comment on how the internet and other modern factors have caused us to separate from one another in a more metaphorical way, there’s no denying that the COVID-19 pandemic leads to a reassessment of the game’s themes and story. 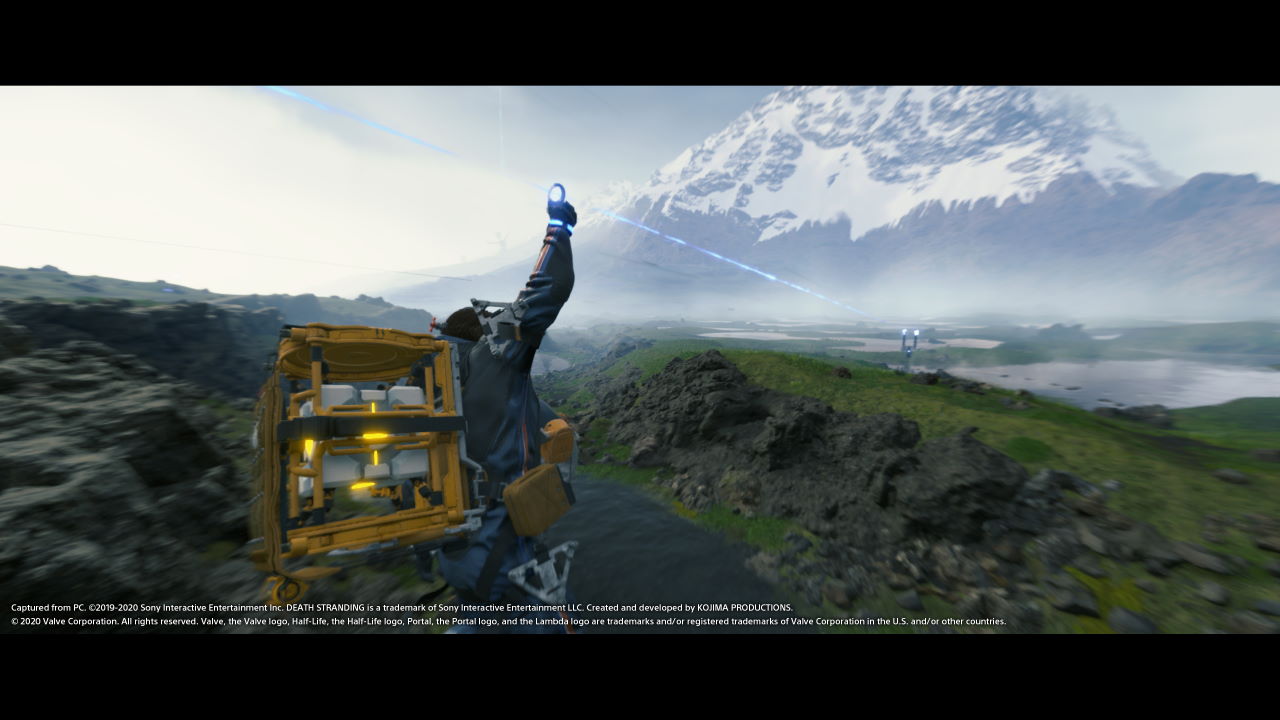 Does all of this make Death Stranding on PC a better game? Yes, it really does. Objectively speaking, this is the more refined technical offering of the game. All the other stuff would be the exact same if you just picked it up for the first time on PS4, so it’s more a subjective commentary on how you will feel playing it today as opposed to those who played at launch. Death Stranding PC looks and plays better than its PS4 predecessor (if you have strong enough hardware of course), and even tosses in some new Half Life and Portal themed side missions as an extra bonus. If you have the opportunity to play the game on either platform, this is the best way to do it.

Death Stranding is only made better in the transition to PC. Its world feels more vibrant and alive thanks to 4K and 60fps gameplay. Beyond that it’s mostly the same experience as you got on PS4, which was already quite impressive. The game has also taken on new relevence given real world events, so playing it now has a very different feel than last year. However, while its strengths have been enhanced, so to have its weaknesses, especially in its overarching story. There’s no doubt though that Death Stranding is one of gaming’s most unique experiences and it’s fantastic that its audience can grow with this release.