Diablo 2: Resurrected is an interesting take on remastering classic titles. It stays very true to the original release of the game in 2000, simply adding a fresh coat of paint, squashing some bugs, adding controller support and a few minor quality of life changes. That’s not necessarily a bad thing though; Diablo 2 is a revered classic. Before the release of Diablo 3 in 2012, Diablo 2 was still being regularly sold and played, with 11 million players playing Diablo 2 (& Starcraft) in 2010. But does the game still hold up 21 years later?

It is worth mentioning the ongoing lawsuits currently in progress against Blizard Entertainment. Blizzard has been accused of providing toxic workplace environments, participating in a “pervasive frat boy culture”, and engaging in misogynistic practices. Many long-time Blizzard employees, including the former president of the company, J. Allen Brack, have left the company and faithful players are actively boycotting Blizzard titles. Diablo 2: Resurrected was co-developed by Blizzard, being the original developer and publisher of Diablo 2, and Vicarious Visions, who handled the majority of the remaster.

Diablo 2: Resurrected’s visuals are a huge step up from the original, as is expected with the 21-year gap. I found myself regularly switching between classic and modern visuals, in awe at how gargantuan the change is between them. What used to be a blocky, smudged mess of green and red pixels is now a defined pile of bile and bloody ribs from the demon I had just slain. My character is reflected in streams of water, bolts of frost break apart when hitting enemies and burning ashes sporadically rise and twist above roaring fires.

The difference is incredible but doesn’t drift far from the tone of the original release. It still successfully makes the player feel like they’re in a dark, gloomy cave surrounded by horrific demons or lost in a sweltering desert full of hidden treasures. The graphics may not be on par with full-priced, AAA games released this year, but they definitely still look good, surpass the original’s presentation and make the experience much more enjoyable to play in the modern-day. Cinematics, on the other hand, are absolutely above industry standards. They are completely remade from scratch and are shot-by-shot recreations of Diablo 2’s original cutscenes, beautifully crafted to the point where it’s sometimes indistinguishable from a live-action blockbuster. The detail of each character presented in cutscenes is possibly the best I’ve ever seen from a remaster. The story isn’t just told through dialogue, but the facial expressions and mannerisms of characters, as well. Diablo 2‘s cutscenes were impressive at the time, but don’t hold a candle to Diablo 2: Resurrected’s astonishing cinematics that manages to truly tell the game’s story in the way the developers imagined it in their heads 21 years ago. It’s a prime example of how far technology has progressed in the last two decades and possibly my favourite part of this remaster.

There are 7 unique classes: Paladin, Barbarian, Sorceress, Necromancer, Druid, Amazon and Assassin. Each class has three skill trees, which are able to be mix-and-matched to create all manner of interesting builds. I personally went with the Necromancer for my main character and focused my build primarily on the ‘Summoner’ tree, but also selected spells that appealed to me from other trees, such as curses that would increase the damage my skeletons would inflict and a spell that allowed me to barrage demons with the teeth of a dragon.

There are definitely classes and trees that are better than others, we’ve had many years to figure everything out, after all, but each class is viable and offers fun variants the player can tailor to their own playstyle. Gear found in the world can also mix things up and it’s always exciting to find new armour and weapons that can alter the playstyle and pace of the game. I received a zombie head after conquering a dungeon that granted me abilities I wouldn’t otherwise have had based on the skills I had chosen. Finding new equipment encouraged me to explore the world more and boosted the already fantastic feeling of progression as the game went on. Not only was my necrotic army growing as I levelled up, but my character also started to look fiercer and I was able to perform more interesting and powerful abilities as time went on.

‘Satisfying’ is a word I would use to describe Diablo 2: Resurrected well. Going from whacking tiny imps with a stick to barraging a diabolical Prime Evil from the depths of Hell with a barrage of spells while my army soaks up their attacks is satisfying. Equipping new armour and weapons is satisfying. Exploration is satisfying. There’s no wonder Diablo 2 has stood the test of time after all these years. 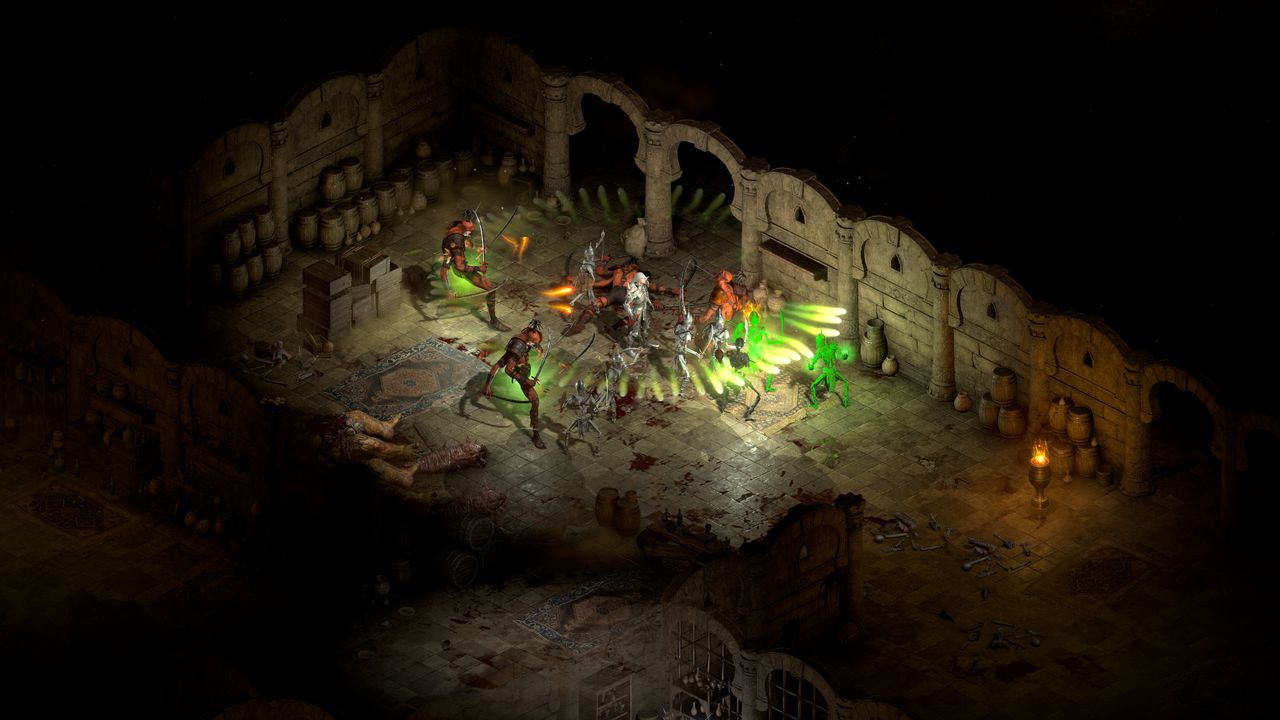 Being such a faithful remaster of a two-decade-old title, some of Diablo 2: Resurrected‘s gameplay is, admittedly, dated, however. Movement can feel clunky, the pacing can, at times, feel slow and there isn’t a lot of variety when it comes to the visuals of armour and weapons. There are no quest markers or large maps, players have to pay attention to the story and explore the world. Whether the absence of updated gameplay features is a positive or a negative thing will depend on your relationship with the original title, as well as with games in general. I quite enjoyed having to rely on what characters would tell me and exploring the randomly generated maps, watching my minimap fill in as I explored areas I would’ve liked walked straight past if I knew exactly where I was going. This lead to me finding treasures and interesting areas and encouraged more exploration.

The only issue with the map being (mostly) randomly generated are the long areas of grass, sand or general terrain that have absolutely nothing there and serve no purpose other than to walk across. This, mixed with the stamina mechanic, can make some areas boring trudges from point A to B. Dying can also be extremely annoying. Your character is sent back to a rest area without any of their items and you will have to walk all the way back to your corpse before you can retrieve your inventory. There are Waypoints, methods of fast travel, that can make this less of a burden, but at times I found myself slowly walking across the map to my corpse for 5-8 minutes at a time before I could continue what I was doing. 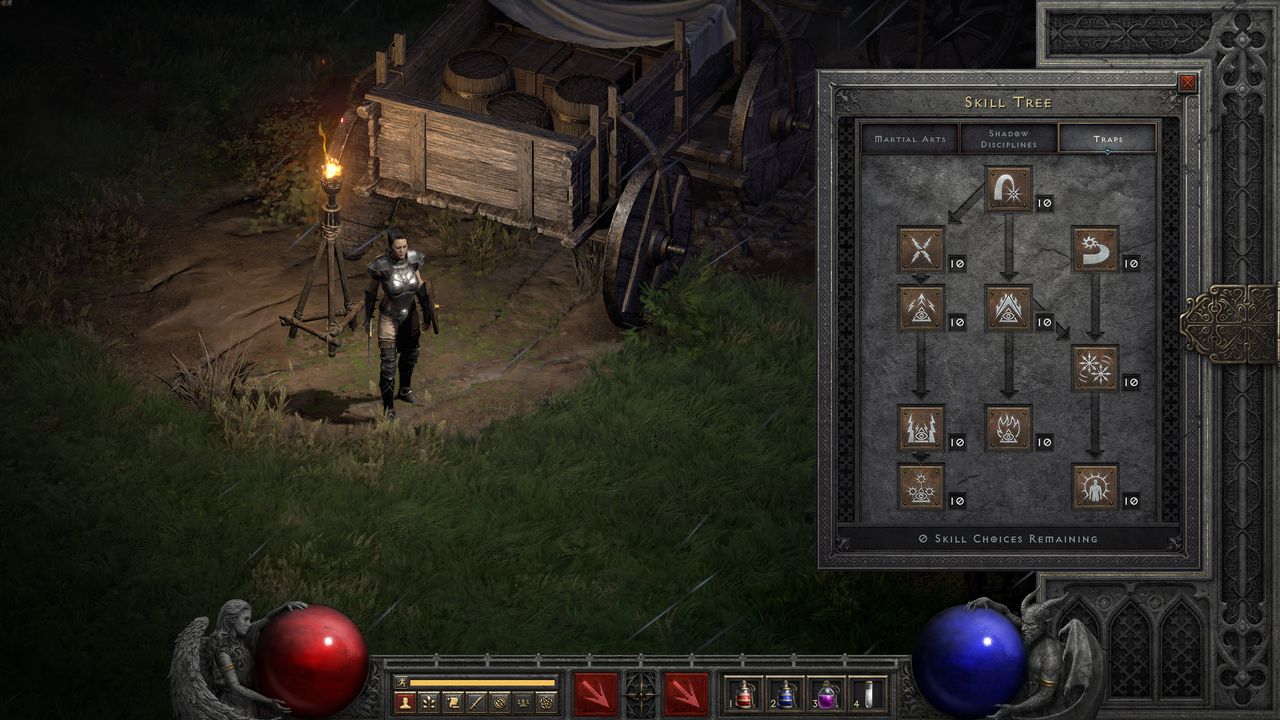 If you’re playing on mouse and keyboard, there is, unfortunately, no skill bar, unlike in Diablo 3. Two skills are assigned to your left and right mouse click and pressing the bound button on your keyboard will change which skill is currently selected. If you’re playing a console version or using a controller on a PC, the game does have a skill bar. This definitely makes the game more controller-friendly, but the lack of options to enable this while playing on mouse and keyboard is disappointing. A skill bar would’ve made the game more enjoyable to play, especially in the first few acts of the game when you’re trying to remember which abilities are bound to which key, but doesn’t detract too much from the experience when you’ve become used to it.

Inventory management is also an issue, your bag space is tiny and can’t be upgraded, other than by belts, which only hold potions. Changing this would possibly detract from the original gameplay, however, I feel an offline mode with more bag space as an option would’ve been a great addition. The Stash having more shared space between characters is a welcome addition, however, and eliminates the need for alternate characters purely used to stash items.

The audio stays mostly the same in Diablo 2: Resurrected, other than added support for 7.1 Dolby Digital, and holds up well. The incredible soundtrack fits the mood of whatever zone you’re currently traversing or battle you’re taking part in and the sound effects work well with what’s happening on screen. Some sound effects can be a little cheesy, such as the splatters, but it adds to the charm and builds well off of the nostalgia of the original title, which is a big part of the game. The voice acting, at times, is notably poor but the main characters are performed well, such as the legendary Deckard Cain, voiced by Michael Jonathan Gough.

Accessibility and Quality of Life

Diablo 2: Resurrected has an impressive array of accessibility changes. There are options to reduce the amount of clicking needed, such as the ability to toggle being able to hover over items on the ground to view them, which both improves accessibility and reduces finger fatigue. A colorblind mode allows the player to change the visuals specifically for their type, be it Protanopia or Tritanopia. Audio can also be tailored to suit the player’s needs, reducing the sound of things deemed unnecessary and increasing the sound of important audio cues, as well as being able to enable the option for subtitles or increased font size. 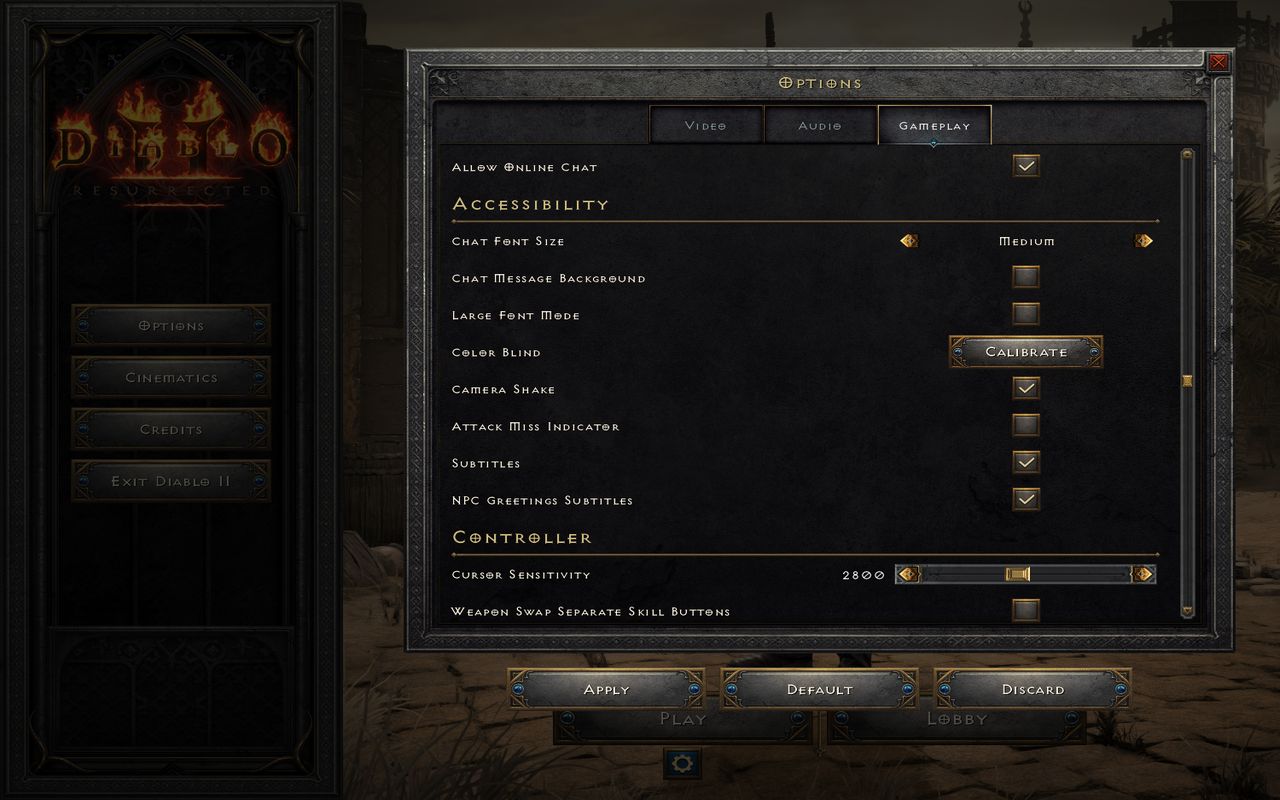 In terms of QoL updates, there aren’t many, but the few that are there are appreciated. Auto-pickup can be toggled on or off, which ties in with decreasing finger fatigue, considering the sheer amount of constant clicking the original title required. Loot can be spread further apart, so it’s easier to click on or obtain for controller players. Multiplayer is also much easier this time around, no dial-up internet required!. Simply make a game and provide friends with the password, or invite them via Xbox Live or PlayStation Network. Controller support itself, I found a little clunky. Abilities were easier to perform, but you could still tell that the game was designed to be played on a mouse and keyboard and gameplay felt slower. With enough getting used to, it’s certainly a viable option, however, it’s definitely not on par with Diablo 3’s console controls. Last, but not least, the Secret Cow Level can now be played infinitely. Praise be, praise be.

Diablo 2: Resurrected launched with a plethora of technical issues that Blizzard are still working to fix, much to the outrage of Diablo fans on launch day; deleted characters, characters locked into games, players not being able to launch the game and crashes. I personally only encountered two bugs, which were the constant disconnect of my Xbox Series X controller when playing wirelessly and a crash that caused me to have to start a dungeon again. These bugs will be fixed in time, but it’s something to consider before purchasing the game immediately. Having a character 50 hours into the game being deleted is not fun.

Diablo 2: Resurrected both benefits and suffers from its faithfulness to the original title, but overall provides an adventure full of satisfying gameplay and fun exploration. Its updated visuals, quality of life updates and overall feel makes Diablo 2: Resurrected the definitive way to play Diablo 2 and its expansion, Lords of Terror.
Classes are varied, unique and fun to play, dungeons are a blast to explore and the sense of progression is ultimately rewarding. I would highly recommend Diablo 2: Resurrected to fans of the original title, classic ARPGS or of the franchise. However, the inconveniences and outdated gameplay might be a little bit too much for modern gamers or people looking to enter the Diablo franchise for the first time.

In this article:Diablo 2: Resurrected, featured 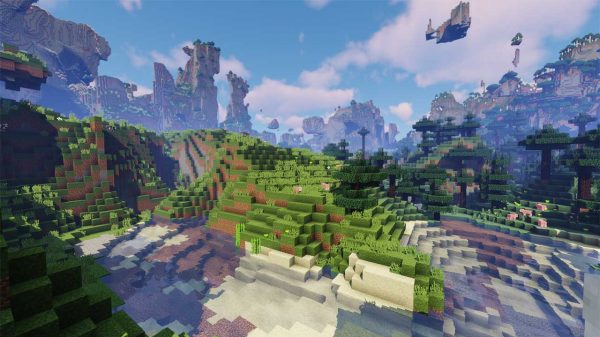 Looking for good Minecraft seeds to test out on your new world?  In this list you’ll find the best Minecraft...