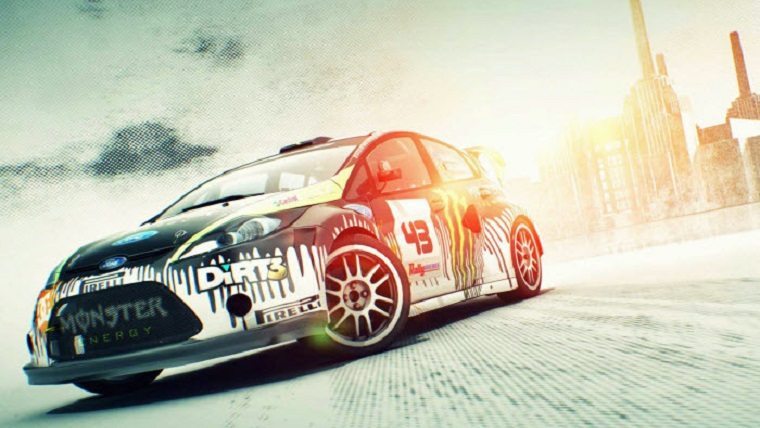 DLC for Codemasters excellent rally arcade/sim Dirt 3 is coming fast and furious.  In a gaming world that is increasingly populated with microtransactions, Codemasters has joined the DLC bandwagon in a big way with biweekly DLC for Dirt 3.  Many Dirt 2 fans begged for DLC to no avail, but this time our calls have been heard… just don’t tell your wallet.  After a little over one months time, all released DLC adds up to 33$ (23$ if you bought a new copy of the game) and more is in the pipeline.    Below are my impressions of the offerings to date.

Mini Gymkhana Special Pack | 160 MS Credits/2$
This little mid engined custom beast is a lot of fun, although it is too bad it is limited to Gymkhana events.  I am personally not the biggest fan of Gymkhana in Dirt 3 (an experiment by codemasters that seems to be getting hot and cold responses), but I welcome the variety and the chance of pace. Unless you are a Gymkhana fan, I would just let this DLC slide.  Mind you, for 1.50$, I can think of worse things to buy.  I should note that this 58 MB DLC downloaded instantaneously on Xbox Live.  It may not be a huge file, and Xbox Live is fast, but not INSTANT fast.   I could not help thinking this car was on disk, and I just paid to have it unlocked.

Monte Carlo Track Pack | 800 MS credits/10$
Does 800 credits seem a little steep for you? Just do yourself a favor and buy this DLC.  Any true rally fan should be salivating at the change to run the Monte Carlo mountain ranges.  Monte Carlo can be summed up as fast (with some hairpins to keep you honest), narrow, a wall of rock on one side, a sheer cliff on the other, with breathtaking views, ice and snow at the top and a new weather effect fog to keep things interesting.  This is not a run for the feint of heart and Codemasters implicitly stated that this DLC was not for the beginner.  Some advice: Don’t get too liberal with your racing line, or you will be sure to be rewarded with a high-speed flip off a sheer cliff.  There is little room for error in Monte Carlo, and it is fun as hell.  Another bonus is that the rally stages for this DLC are integrated into the world tour (unlike the DLC tracks of say Forza 3, that were unfortunately not part of the career mode).  Sadly, the new Fog weather effect is a bit underwhelming.  Fog effectively reduces your view distance in game, but the reduction will only be noticed in higher performing cars, as you will have even less time to prepare for those imminent hairpins.  In the end, fog becomes more of a cosmetic change than anything.

This DLC is the solution to one of my few criticisms of Dirt 3… I wanted more Rally locations.  The question is, how much is it worth to you?

Power and Glory Car Pack | 480 MS Credits/6$ (160/2$ per car if bought separate)
First is the 80’s BMW M3 Rally, which is limited to… rally stages. Like you would expect from a BMW this is a real “point and shoot” rear wheel drive with excellent balance.  True to life, you need to watch throttle input and the back end of this car on slippery turns as you can quickly find yourself pointing the wrong direction due to over-steer.  This car excels on tarmac stages and benefits from a more traditional racing line as drifting can be a chore at times.

Some will have mixed emotions with the addition of the Group B Lancia Delta S4 that is available for rally stages of the game. On the positive side this iconic car is an essential addition to Dirt 3, sporting agility and power (it has a supercharger and turbocharger) that make spectacular crashes a thing of ease, and rewarding the skilled with white knuckled perfection.  On a more controversial note, this was one of the cars featured in the pre-release Group B trailer.  Was the Delta S4 purposely cut from the game, only to be sold back to us as DLC?

The Chevrolet Camaro SSX makes a debut appearance in Dirt 3 as a choice for “Trailblazer” events.  At first this car would seem to be the odd duck out, but it drives surprisingly well, and it is impossible not to get seduced by the sound of a 6.2L V8 in full attack mode.

Next on the list is the Rallycross Ford Focus ST. This is a remake of Sverre Isachsen’s 2009 and 2010 Division 1 European Rallycross championship car.  I found this to be a middle of the road car that neither lagged or stood our in the crowd of Rallycross car options.

Finally we have our Gymkhana addition, the Scion tC. This is the rear wheel drive, NASCAR V8 powered monster that Tanner Foust drove in Formula Drift competitions.  I am biased against Gymkhana, but the soundtrack alone makes this car a tempting option when the Gymkhana desire takes me (Being a handsome car doesn’t hurt it either).

Overall, I found this pack was worth the cost simply for the Rally cars alone (although the Camaro surprised me in a good way).  More cars is always a good thing in my books (the extra liveries for each is great too), and Dirt 3 benefits from the diverse selection of five cars in this DLC.  The good news is that with the exception of the Lancia Delta S4, those pinched for cash won’t feel left out if they don’t get it.  For the hardcore Dirt 3 fans out there, this pack should be an easy yes.

Teams and Cars Unlock Pack | 240 MS credits/3$
This DLC gives you instant access to all events, cars and liveries in the game: no in-game grinding required.  I am sure some people are happy to pay money to access in-game content early, but for me, such a shortcut kills some of the fun of racing games.  I have always found that the grind for new cars/liveries was half the fun.  This kind of “DLC” makes me think of EA and Madden Football’s “pay to win” DLC strategy.  No thanks.

Colin McRae Vision Charity Pack | 160 MS credits/2$
This DLC allows you to drive the Ford Escort Mk II, a rear wheel driven car that had much success in the mid-late 70’s rally scene (unbeaten on the RAC Rally from 1975-79).  This car was driven by, and is a tribute to Colin McRae, who died in 2007. All proceeds from the pack go to the Colin McRae Vision Charity, which raises funds for causes around the world.  Like other car DLC, this one comes with five different liveries.  If you are a fan of 70’s rally or want to support a good cause, this car is for you.  Keep in mind that this car is only available for rally events in-game.

VIP Pass | 800 MS credits/10$ (free with new copy of game)
A lot of people will find this type of DLC to be controversial… mainly those that buy used games (it comes free with every new copy of the game).   What this pass gives you access to unlock all Dirt 3 multiplayer modes, 5 on-disk cars (Colin McRae R4, 1995 Subaru Impreza WRX STI, Ford Sierra Cosworth RS500, Peugeot 405 T16 Pikes Peak and the Hummer H3) and the ability to upload up to 30 second clips to YouTube.  I personally have no issue with this kind of pass, as I believe the used game market hurts game developers, but I am sure many will disagree.

Final Thoughts
I personally love Dirt 3, and it is one of my favorite games of the year to date.  It is simply gorgeous, has great sound effects, and the gameplay is simply a lot of fun.  You are truly missing out if you have not had the chance to play Dirt 3 with a wheel, all assists and Hud turned off, a surround sound system (turned up to 11…), and large screen TV.  I always welcome DLC for all of my favorite games, and it would appear that plenty is in the pipleine for Dirt 3 including a car pack called “Mud and guts” and the X Games Asia Track Pack at Shibuya.  The downside is that you wallet will take a big hit, so I suggest you stick to the DLC that adds to your favorite modes of Dirt 3.