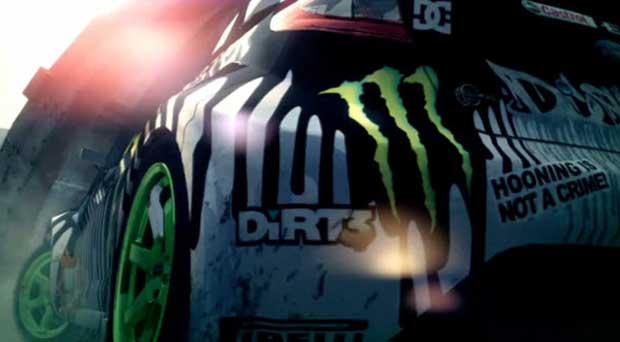 The Spice of Life – As far as games go, variety can make a good game great, and a great game, legendary.  One of the most exceptional features of Dirt 3 is how much there is to do in the game.  Whether you are into racing your way to top in solitary fashion, or enjoy playing your games with friends, Dirt 3 has a multitude of options in each mode.  The single player campaign has layer after layer of competitve computer racing action that will pit you in competitions across the globe.  The circuits which vary from frozen snowy tracks, to industrial settings, the mountains of Kenya, and many others, you seemingly never run out tracks to race as the route configurations seem to be endless in both the single player and multiplayer portions of the game.

New to the off-road mashup that is DiRT 3,  are the Gymkhana events, where you’ll be needing to completely master your vehicle to complete a variety of challenges, like smashing blocks, performing jumps, drifts, donuts, and other stunts that add a whole new element to the game that just wasn’t there in DiRT 2.

This variery in DiRT 3 carries over to the multiplayer component in a big way.  While the single player is fun, the multiplayer is nothing short of amazing.  You can test your mettle against online opponents in standard races across one of the games many tracks, or you can play one of the game’s party modes which feature options like Capture the Flag or will just let you horse around with your friends in one of the games Gymkhana tracks.

Particles of Light – As the title denotes, DiRT 3 has you racing on rugged terrains.  Whether that be dirt, snow, gravel, or traditional roads, one thing that defintely stands out in Dirt 3 are the particle effects when trailing a pack of cars in the varied conditions.  Between the exceptionally handled effects of snow or dirt kicking up to obstruct your view, and also phenomenal lighting effects in the game, DiRT 3 is a marvelous game to look at.  Unfortunately the times when its likely to awe you, are the ones you’ll be needing to muster as much focus as possible on surviving the next turn.

Great in Car view – With any great racing game, an in-car view that can hold its own against other big name racers is a must.  Thankfully, Codemasters didn’t just phone in the in-car presentation.  The combination of the particle effects spoken about above, and the in-car view points can make for some hair raising experiences.  With a wide variety of vehicles to choose from, and an accurately modeled interior design for each, DiRT 3’s in-car view does not disappoint.

Flashy Presentation – If you haven’t had the opportunity to play DiRT 2, Codemasters started a tradition with that title of incorporating eye catching menus and music to further your journey in both the single player and multiplayer portions of the game.  This time around, Codemasters ditched the trailer and went with a more abstract approach.  Instead of a map, you are now guided by coaches who comment on your performance and introduce the new concepts that are opened throughout the single player seasons.  The coaches are a particularly nice touch.  They give you helpful commentary throughout the game and at times I could swear they read my mind in multiple instances.  For example, winning multiple races handily will have your coaches suggest that you up the difficulty of the game, something I wish they never did, but it happened at a point where I was beginning to question the AI’s inability to come within 10 seconds of me on any course.

Level Up – DiRT 3 won’t have you amassing a collection of cars as you further your career, but instead you’ll earn points for completing different objectives throughout the game.  In lieu of a car collection, you’ll collect sponsors.  These sponsors will open up new options for you to explore when deciding which car you’ll be using for a specific race.  As you might expect, the higher the level, the higher performance of some of the cars available to you.  These cars also require a substantially higher degree of ability to control, so hopefully your skills also increase with playtime.  You’ll earn points for finishing first or completing vehicle specific objectives, alongside other bonuses like not using the re-play mode, which is available up to five times per race.  As you earn points and level your driver, you’ll also be unlocking new events, and seasons to play along the way.

Well Rounded – Its definitely difficult to point at one thing in DiRT 3 and say, “That’s it, that’s what makes DiRT 3 a good game”, because Codemasters does so many things well in the title.  It’s got a heavy coat of sexy all over itself in the graphics department.   The controls feel fantastic.  The damage modeling in the game, which is adjustable all the way up to full on realism, is exceptional.  The game’s music is pitch perfect.  It’s got menus that’ll entice you to just stare at.  And the game’s got a lot to do and see, without ever really feeling like it’s rehashing anything in either the single or multiplayer modes.  It’s simply the best blend of arcade and simulation racing on the market.  It took nearly everything from DiRT 2 and upped the ante, with a more polished and streamlined single player experience, and a more robust multiplayer suite.

Track Design – I fell in love with DiRT 2, because it was a game that I didn’t see coming.  You know, one of those games that flies under the radar, and suprises the hell out of you.  I thought that the some of the level design in DiRT 2 was amazing.  The game showcased the different locales and eventhough I haven’t played the game in over a year, I can still remember cruising through the open dirt roads or colorful closed courses of that game.  DiRT 3 seems to have traded some of these signature tracks from the last game for new versions, but for some reason come off feeling a bit less inspired than the last game.  Don’t get me wrong, there are still some spectacular and memorable tracks to be seen, Monaco at night with fireworks bursting is one of those tracks.  With the inclusion of the new weather effects into the game, some of the more imaginative venues from the first game have fallen by the wayside to give a grittier more realistic take on the sport.

Toes the line – If you’re one of those gamers that absolutely hates when a game can’t make up its mind what it is, DiRT 3 might not be for you.  Although DiRT 3 has a lot of customizable options that will let you make the racing as real as you want it to be, it never quite makes it to simulator status.  So DiRT 3 is not quite a there on that front, although I don’t think it ever claims to be either.  But with these customization options, it gets as close to either side as you choose, though never really crossing over to one side or another, simulator or arcade racer.

Online Pass – As expected, DiRT 3 does feature an online pass to play the game on your network of choice.  No trials, no limited features.  If you want to play DiRT 3 online, you’ll be needing a registration code.  Even when playing with no internet access, some vehicles will only be accessed with this V.I.P. code.  With DiRT 3 being a game I could see people renting, and liking so much that they buy it, this pass probably hurts future sales more than it would have if not included.  DiRT 2 was a fringe game for me, and I probably still would be none the wiser if I hadn’t tried, then subsequently bought the game back in 2009.

Youtube – One of the coolest features that I thought would be much better than it is, DiRT 3 gives you the ability to upload race clips to YouTube.  Which even in that statement is much cooler than it actually is realized as.  The major problem with the replay capture feature is that it is painstakingly long upload times take you out of the game for 10 minutes while waiting.  The costs outwiegh the benefits of the ability to upload videos because they are saddled by both time constraints and quality constraints.  It’s a great feature that is likely to be finding its way into other games as franchises look to incorporate social media, but unfortunately I just think that we’re still being held back from a bandwidth standpoint.

The Mysteries of Gymkhana –  During my time with DiRT 3, I didn’t get fully comfortable with all of the different things offered to me until I was well into my second season of racing.  With the whole first season being a trial by fire, the game never really sits you down and explains the basics.  In a gaming world that now force feeds you detailed tutorials to make sure that you have the basics down before moving on to the hard stuff, DiRT 3 smacks you on the ass, and just assumes you’ll figure it out.  Many of the games modes are straight forward, but newcomer Gymkhana, not so much.  Ken Block will come on to teach you about scoring points in the mode,  but it is explained as if you were behind the wheel of a real car.  I suppose it’s all rather intuitive by design, but a little bit more explanation up front would save some frustration and shorten out the learning curve.

Codemasters simply makes great racing games, and DiRT 3 furthers the argument that these guys are the best in the business.  DiRT 3 mixes some really exceptional elements of traditional racing games with newer features, like the Gymkhana events, and non-competive multiplayer modes, to offer a total package that’s a lot of fun to play.  With so much highly polished variety, DiRT 3 is one of those games that racing fans should be ashamed of for not picking up at first opportunity.