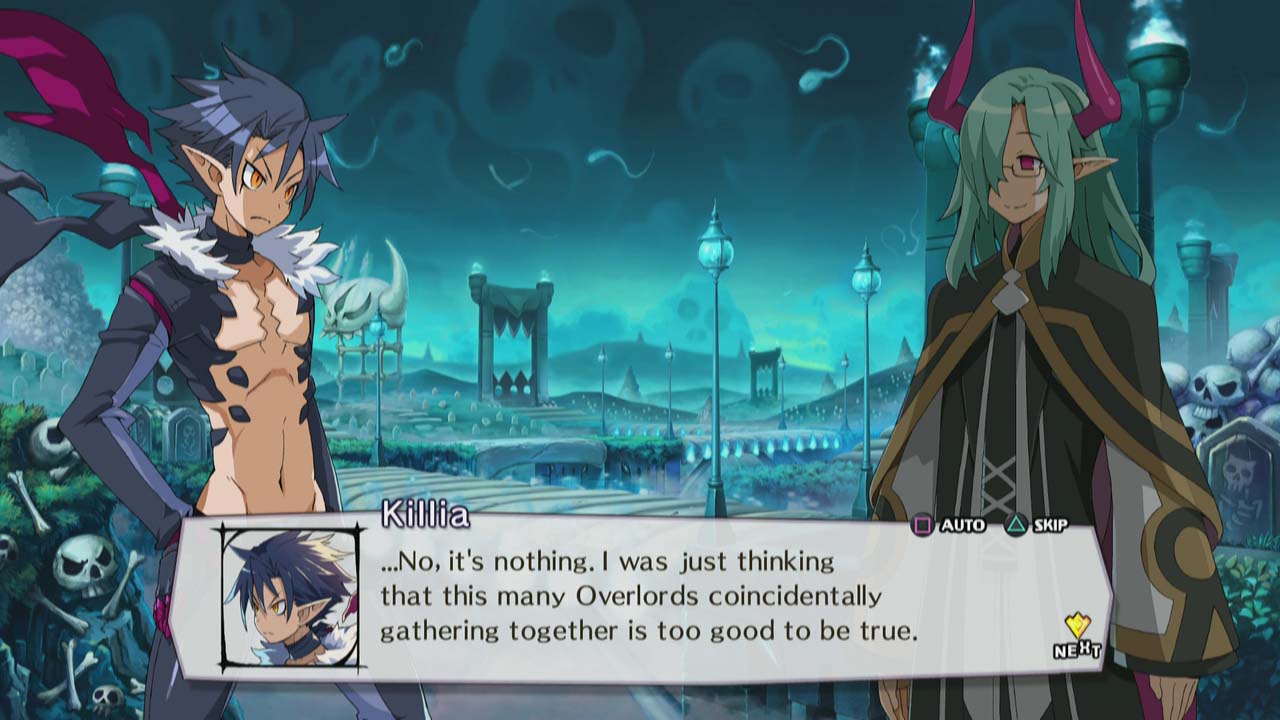 I’ve spent the last 10 evenings in almost total isolation. I’ve locked all the doors, drawn all the curtains, put on the headphones and focussed solely on playing Disgaea 5. And yet, I’m still not quite over the line. I’m on the 14th of what I believe to be a total of 16 chapters, and, well and truly, that’s because Disgaea 5: Alliance of Vengeance is overwhelming, but in the best way possible. Rarely am I confronted with such a deep, complex and, most importantly, fun combat system, supplemented by a multitude of cool and worthwhile stuff. It’s a shame that a so-so story (so far) and a reliance on tedious grinding acts as a heavy anchor on the overall package.

Speaking of the story, Disgaea 5: Alliance of Vengeance’s tells the classic tale of good versus evil. The game’s main protagonist, Killia, is a powerful demon who holds a seemingly deep-rooted grudge against the game’s villain, Void Dark. The latter is ever so slowly seeping through the Netherworlds with his army of Lost, leaving behind him a trail of destruction. Killia joins forces with various Overlords that he meets along the way, as they aim to topple the baddie.

It’s a story that serves its purpose well enough, moving you from point A to point B as you traverse the various sectors of the Netherworld to defeat Void Dark’s army. The character’s, too, are generally likable. Seraphina serves as a charming companion to Killia, and the witty banter exchanged between the two made me chuckle on numerous occasions. But it isn’t the high-point of Disgaea 5, nor is it the reason to sit through its 30 to 40 hours worth of content. For every laugh and joke, there was a tedious conversation that, had I not been playing the game for review, I’d have been inclined to skip.

Where Disgaea 5 excels is in its gameplay. It’s a turn based strategy game – think Fire Emblem, Final Fantasy Tactics or Advance Wars – but with even more meat on the bone. Its early moments are tutorial-heavy, and rightly so, but the game quickly opens up. You take control of a cast of characters, all of which tote different abilities, as you move across a battlefield, eliminating your foes one by one. But there’s more to it than that – in fact, there’s just so much to think about.

Positioning your characters for example, cannot be understated – your ranged characters aren’t usually built for taking heavy damage, so sending them to the frontlines is nearly always a suicidal move, but your tougher characters might lack the reach to attack certain enemies. Aligning your characters in a certain way also triggers special team attacks, where multiple characters will attack an enemy simultaneously, resulting in huge damage. Add to that statistical advantages and disadvantages to consider, environmental threats such as poisonous swamps or platforms that reduce your damage output, and traversing via the series’ lift and throw system (you can toss your allies great distances or literally build an unstoppable tower of people to slam down on your enemies).

For Disgaea veterans, a lot of this is familiar territory, but Disgaea 5 introduces some new concepts, too, the most notable of which being the Revenge system. Each character has a Revenge meter, and filling this meter allows you to activate your character’s Overload ability (assuming your character is an Overlord), albeit for a limited time. These are always often useful, giving you the edge in key moments. Seraphina’s Overload ability for instance charms every male character within range, turning them on each other, and Magnus, a character you’ll recruit early on in the game, triples in size, granting him incredible power and an all new move. The catch of course is that the meter is only filled when your allies take damage, or indeed die. 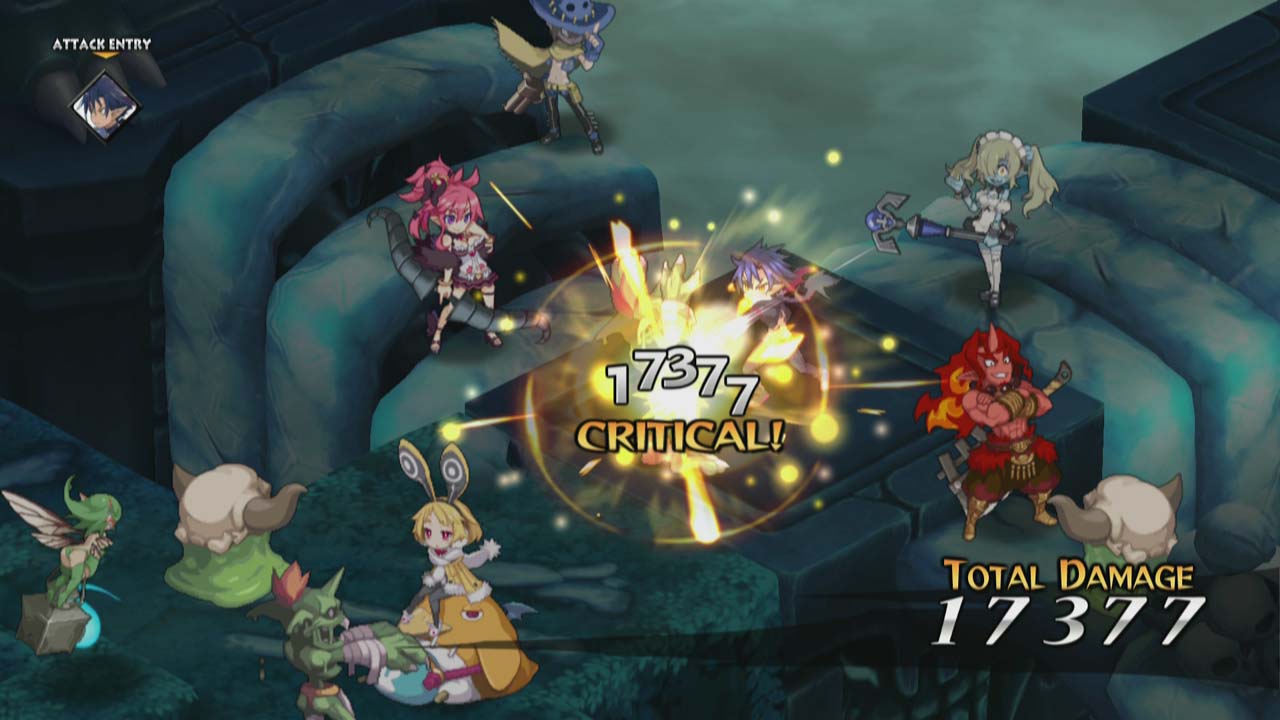 At the front of all of this is Disgaea’s lovely art style. Character sprites are colourful and varied, with almost every new location presenting a distinct theme and colour pallet. English voice acting is solid, for the most part at least, with Killia and Seraphina the highlights. Outside of battle, there’s a delightful little hub world for you to stretch your legs. There’s a lot here that you might expect: there’s a quest giver who hands out quests; an item shop for items; a weapons shop for weapons; a character who enhances your abilities, and plenty of idle chatter to be found. The hub world also provides an opportunity to strengthen your squad. There’s a recruiter who, needless to say, allows you to recruit a variety of different classes, from mage, to maid, to fighter, to the helpless Prinnie.

And yet, there’s still more. You can send off a team via the Nether Research Squad to unlock new worlds, find items and earn experience points. You can capture enemies in battle, interrogate them and convert them into allies. You can create items using alchemy, or access the Item World to level up specific items – you see what I mean? Overwhelming. 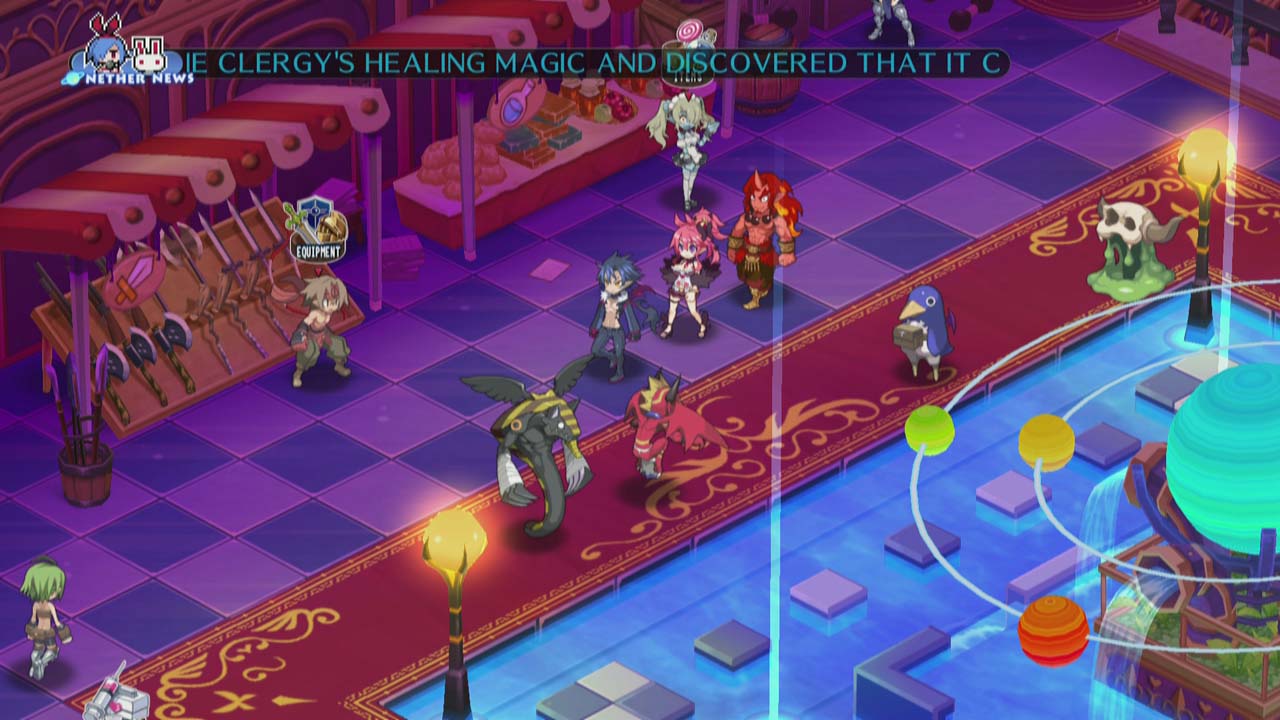 But the game isn’t without its drawbacks, either. As aforementioned, the story is, as of chapter 14, fairly serviceable, without ever excelling to anything higher. It’s a little disappointing truth be told, but the game’s biggest issue is that grinding can often supersede strategy. Certainly from the game’s halfway point, grinding often became a necessity. Levels got tough, and enemies got even tougher, and I often felt that the disparity between the strength of enemies from one level to the next was alarmingly large, leaving me with no choice but to re-tread old ground and hack away at familiar foes. 25 hours in, and it becomes a bit of a needless chore. I have some other minor gripes, too. The main music that plays in the hub world is incredibly irritating, some features aren’t always that well explained, and I don’t like how I’m limited to taking only a handful of side quests at a time.

There’s always something new to do in Disgaea 5: a new strategy to adopt, new characters to recruit, new worlds to find, rare items to collect, and an army to grow. You’ll die, even struggle in some instances, but setbacks can always be overcome in a variety of ways. It has its problems, but Disgaea 5 is a fun adventure, one I’m glad I played.