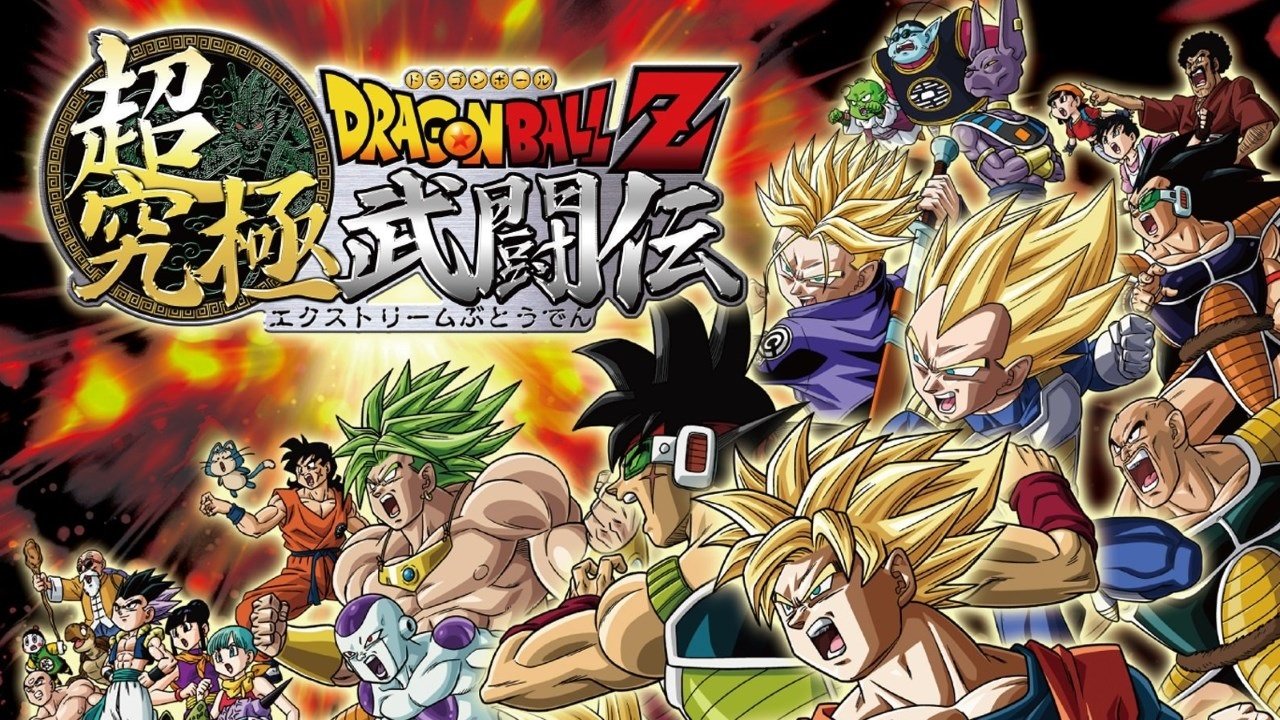 The Dragon Ball brand has been one of the most recognizable names in animation, with the series seeing a major resurgence in recent years behind not only two new movies, but now the ongoing Dragon Ball Super anime. The franchise has also spawned countless video games, with the mostly Japanese exclusive Butoden series providing an antithesis to the array of 3D fighters. The latest game in this long running franchise has gotten a very uncommon US release with the underwhelming Dragon Ball Z: Extreme Butoden.

The Dragon Ball Z: Butoden series dates way back to the Super Famicom in Japan, releasing in both Europe and Japan. However, the US has seen only the release of two games in the series, Dragon Ball Z: Ultimate Battle 22 and Dragon Ball GT: Final Bout, both of which came in the late ’90s. Neither of these games were very good, which disappointingly seems to carry over in some ways into the latest release.

Unlike the 3D fighters that have been most popular in the series, Dragon Ball Z: Extreme Butoden utilizes a 2D style that looks really good in action. The animation feels very much like it was ripped from the anime itself, with colorful backgrounds and character sprites.

These characters not only look good, but they run very smoothly in action, which is a vital aspect of any fighter. From the start of the match where each fighter has a unique opening, the fights run well, with little slowdown, which is quite impressive for a fighter of this style on a handheld.

While the fights feel incredibly fluid in action, the gameplay itself is not quite as satisfying. On its surface, the fighting is well executed with a fast moving style that fits Dragon Ball Z particularly well. However, where the gameplay is sorely lacking is the fact that the characters in the game really do not feel that different from one another. 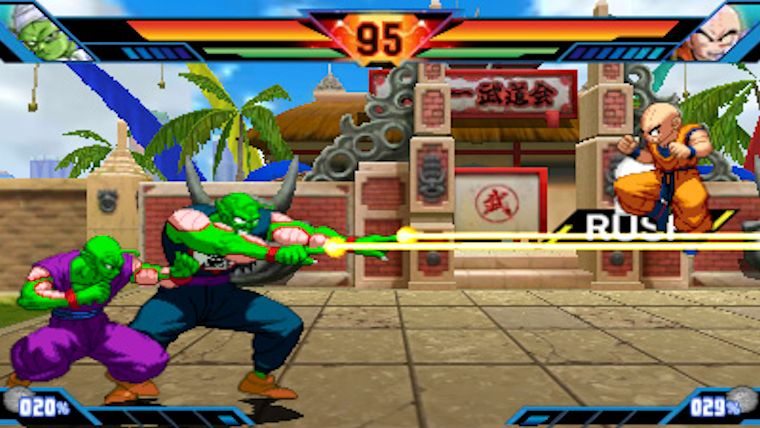 Dragon Ball Z: Extreme Butoden features a standardized moveset for everyone in the game, which includes a simple and strong attack, a ki attack, and then the ability to string together combos. The biggest problem is that the combos are the exact same for everyone, which makes pretty much every character feel like a clone of the rest, with just their character design and signature moves, like the Kamehameha and Super Ghost Kamikaze Attack, pasted over them. Combined with the game’s AI, this almost makes it feel too easy a lot of the time, as there isn’t much to differentiate fights.

This is not to say that the gameplay isn’t fun, as it really can be in short game sessions where you pretty much stick to the same character. Switching back and forth between characters in long play sessions is where you run into trouble as it really feels useless, outside of the aethestic of playing as a certain character. The well put together base gameplay that is very smooth does help to make up for some of this, but it definitely could have used a lot more variety.

Variety is not just an issue with the gameplay, but also with the character selection. The playable roster is one of the weakest in any Dragon Ball related game in quite awhile, as there are only about 25 to choose from, with a number of those taken up with slots for Super Saiyan variations of numerous characters, though some, such as Gotenks are only available in their Super Saiyan form, while their Super Saiyan 3 form is missing entirely. This roster is also missing staples like Tien and even Hercule, which are luckily still included in some way through what are called Z Assists.

While the playable character roster is very lackluster, the number of Z Assist characters is rather massive in comparison. The inclusion of such a large roster is truly for the longtime Dragon Ball fans, as it includes characters that range from the original series and up to GT, including some fan favorites like Launch and the World Tournament Ring Announcer. These are essentially summons that you can call upon in battle, with each having a unique ability. While most of the character roster is unlocked from the start, the Z Assists have to be found within the game’s Adventure mode by completing stages on the highest ranks. 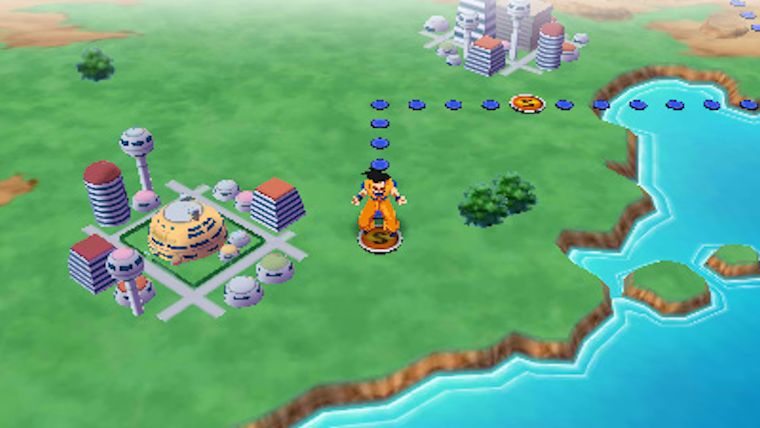 Adventure mode is one of the two game modes that you will more than likely be playing the most, alongside Story mode. Story actually has to be played first, as you make your way through 10 of the most memorable moments in Dragon Ball Z’s history. After completion, this opens up to stories based on individuals that serve as the ladder style mode in the game that features an occasional “what if?” scenario, but typically stick to the known story.

After Adventure mode is unlocked, you will have the opportunity to play a somewhat original story, though it really doesn’t have much to it. Like the most recent release, Dragon Ball Xenoverse, time travel plays a part as Goku is tasked by the Supreme Kai to collect seven special Dragon Balls to save the world. This is then split across eight areas that feature an overworld map, each with a number of stages where you combat a set enemy.

Each of the individual stages have win conditions that get you more points, while also ranking you on how well you played, with the S, A, and B ranks typically being awarded prizes from new Z Assists or the game’s in-game currency, the latter of which can be used on items within Adventure mode. This mode offers the ability to jump in and out rather easily, which really does work to the game’s advantage with it being on a handheld. 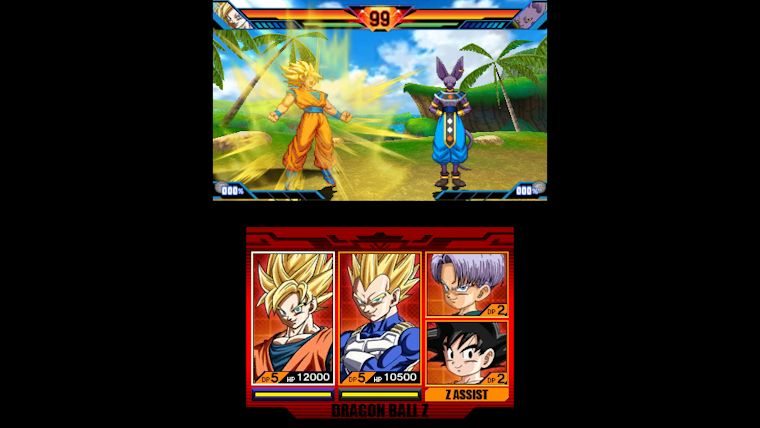 Naturally, the game also features a few 1v1 game modes that are not story driven in the least, which are pretty simplistic on their own. This includes the Battle Mode that has you able to play against the AI, or also the ability to play with friends locally through Versus mode. It is pretty baffling that online play was left out of this completely, as it is the perfect style game to include that. The good news is that it has been announced as coming at some point in a patch, but for now it is rather difficult to play anyone other than the too easy AI. There is also the unlockable Extreme World Tournament mode that comes later, which takes it a bit further with numerous matches in a row against computer controlled players.

The Dragon Ball related games have not always had the most depth to them and sadly Dragon Ball Z: Extreme Butoden somewhat falls into that category. The gameplay itself is fast moving and very fluid, while also looking gorgeous on the 3DS, but the lacking character roster and cut and paste gameplay across each of them holds it back from being a really good game. Dragon Ball fans can definitely find some fun here for awhile, especially with the large selection of Z Assists that span the entire franchise, but a far from deep experience will not keep you coming back for more with Dragon Ball Z: Extreme Butoden.