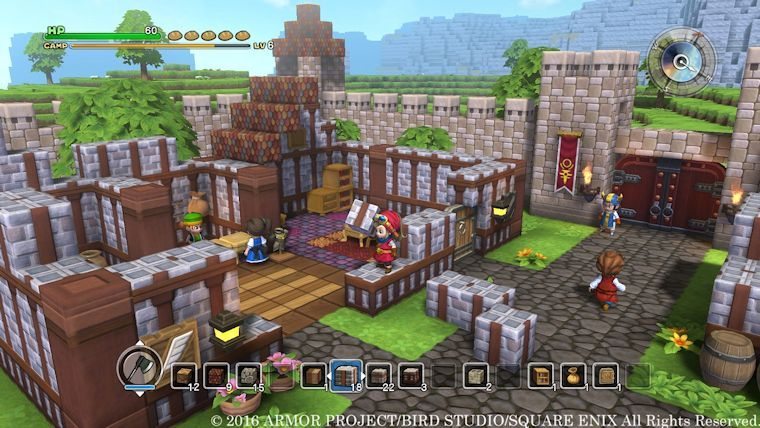 Dragon Quest is celebrating a major milestone in 2016 for its 30th anniversary, with the series spawning plenty of different games over the years. Outside the mainline games, the series has tackled a number of other genres like last year’s Dragon Quest Heroes. While fans anxiously await the upcoming Dragon Quest XI, Square Enix has now taken on an entirely new style with the somewhat Minecraft-esque Dragon Quest Builders.

Adventure is vital to the Dragon Quest experience and Dragon Quest Builders is no different, though it tackles it a little differently than in the past. While coming 30 years after the original release, Dragon Quest Builders actually takes direct inspiration from the past by being set in Alefgard, which is the setting of the very first game. The story actually branches off from a parallel timeline based on that game, where the villainous Dragonlord plunged the world into darkness with monsters everywhere. However, you take control of a new hero that while amnesiac, is the only one at that point that is a “builder,” with your goal being to bring light back to Alefgard.

The hero that serves as the game’s protagonist has a little customization available to him or her, though it is rather basic. You can choose their name, as well as change their gender, hair color, skin color, and eye color. This doesn’t provide that many options for you to choose from, but that really isn’t all that necessary in a game such as this.

While the game can be compared to Minecraft with its building aspects and voxel design for the landscapes and buildings, Dragon Quest Builders very much still looks like a Dragon Quest game. Even with the boxy look that make up the locales around Alefgard, the people in your town, the enemies, and even trees, chests, and such all retain their regular look. This was a very good decision by the development team, as going too far with the voxel look could have alienated people that are used to the aesthetics of this series, with the two styles naturally fitting together throughout the experience.

At the very start of the game, your hero character will appear in a town that is completely run down, where you will also be introduced to the first NPC in your group named Pippa. She will introduce the game’s quest system, which has various characters asking many different tasks of you throughout the game. You must fulfill the requirements of these quests, and then return to them to complete the quest and receive a reward. This is how you push the story forward, with plenty of side quests popping up as well.

Dragon Quest Builders features a very lengthy story as you are continuing to build up your own town and venture out further to other islands. Players can always just run through the story as fast as they can, but this is a game where players can spend hours upon hours just collecting materials and building outside of the plot and still be having a great time, so the length truly depends on the player here.

One of the key components of the game is exploring and finding all sorts of new materials that make up this world. Throughout the game’s four chapters, you will eventually branch out to other islands entirely, which each present new obstacles and new materials to collect. This can sometimes get a little confusing though, as there are items you may need to craft, but you do not learn the recipe to make it until after you find a specific item in the world of Alefgard.

Combat has always played a major role in the Dragon Quest franchise and that is no different here, though the experience is drastically scaled back in favor of the focus on building. Just like how you can build structures and different items for use around your little town and really anywhere, you also can craft your own equipment as well. As you play more of the game, you will obtain new recipes and materials that you can use to make stronger weapons. Unlike a typical Dragon Quest game however, your weapons that you create will only last for a certain amount of time, with you being forced to build more. What really helps though is that you can make multiples of the same weapon type and equip a number of them at the same time for easy access between them. 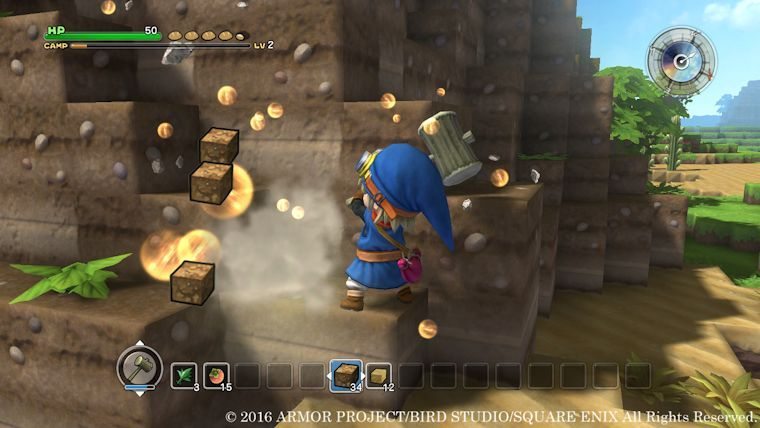 Beyond using these weapons to destroy parts of the world found in the game for materials, you will also be using them to fight enemies. By pressing the triangle button, you will swing your equipped weapon at the enemy, with them then attacking back as well in a real time battle style. You can avoid attacks by moving out of the way, which is very helpful, but a lot of this just becomes moving around and button mashing at first. As you complete more quests throughout the game though, you’ll obtain new abilities and weapons that drastically improve the combat that become very important during later boss battles, even if it still pales in comparison to the turn based style found in the mainline series.

Far from being a Minecraft clone

The X button is multifaceted in Dragon Quest Builders, as it has a number of different uses. It can be used to interact with other people in the game, interact with objects, as well as pull up your menu. The latter brings up a quick menu where you can select things such as Items, Equipment, and Recipes. However, many times you will accidentally pull up the menu rather than interact with another character, which gets a little frustrating.

While the game’s story mode is the main feature in Dragon Quest Builders, the game also offers a secondary game mode that offers even more unlimited possibilities in what is known as Terra Incognita Mode. This is the game’s free build mode that is not dependent on the plot, but rather gives you full control of just creating whatever you want, even though that is mostly possible in the main mode as well. In addition, there are some items, such as the Day One Edition items that are exclusive to Terra Incognita Mode. 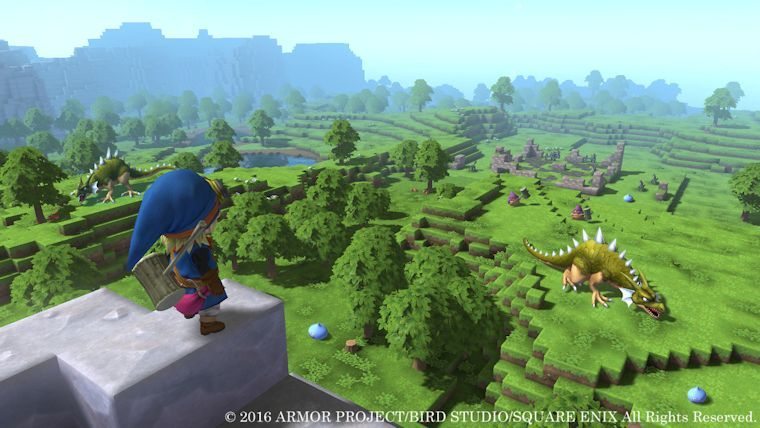 What makes Terra Incognita Mode great for those who only want to focus on building for a game session is that there are no enemies to worry about. This provides players with an almost The Sims like experience where the focus can be exclusively on creativity. Anything built here can also be shared online with others, which brings a little bit of a community element to the game as well.

On the surface, Dragon Quest Builders’ premise may sound a little familiar, but it is far from being a Minecraft clone. The variety of different materials and items to build is very impressive and is expertly mixed with a quest style adventure that has just enough story to feel like a real Dragon Quest game. While created for fans first and foremost, Dragon Quest Builders serves as not only a love letter to the long running series, but also as an excellent introduction for newcomers to this wonderful franchise that is Dragon Quest.