The latest news in the world of video games at Attack of the Fanboy
April 10th, 2017 by Dean James 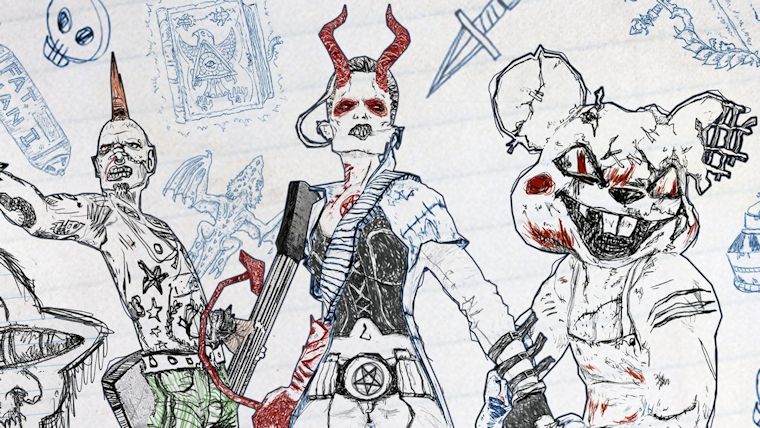 David Jaffe was one of the most respected developers around during the PS1 and PS2 era as he helped to bring gamers the Twisted Metal series and the first two God of War games. After a few games on the PS3, including the Twisted Metal reboot, Jaffe hasn’t been seen for awhile, but now he is back with the little too edgy Drawn to Death.

Drawn to Death utilizes an aesthetic that is based around a teenage boy’s notebook both in physical design and tone. The notebook paper with crude drawings look is definitely very unique, almost like a mix between Sega Genesis’ Comix Zone and the Nintendo Wii’s MadWorld.

As a third person shooter, you will be thrust into one of the game’s eight arenas, with more free ones to come later, as one of the game’s very interestingly designed characters. The character design is definitely out there and something that could come from a teenager’s mind, including a punk rocker named Johnny Savage, a half-naked Leatherface like character with a giant mouse mascot head named Alan, and a busty ninja with a shark head named Ninjaw. In total, the game offers six that all use the same weapons, though they each have their own specials and movement styles.

Drawn to Death also features a load out system where you can select a primary and secondary weapon before each match, with you also able to select two additional weapons that will appear on the map for you as well. The weapons themselves are also pretty varied, with some being your typical rifle, shotgun, and RPG, while some others are really out there, such as the top half of a guy that can throw dodge balls or a corpse that you can shoot out of a coffin at enemies. The latter definitely take a lot longer to use, but they also do more damage, which helps to make the game fairly balanced. 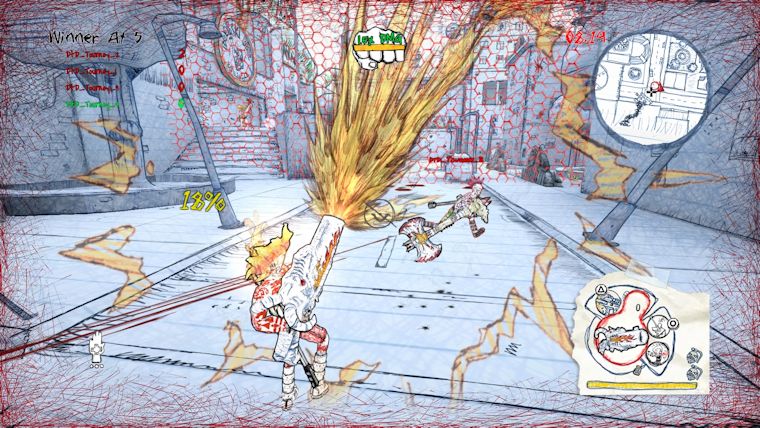 The number of weapons available to you are limited at the start of the game, but more can be unlocked as time goes on. This is done through keys that you earn in the game by completing various missions, such as doing a certain amount of damage with a type of weapon. This definitely rewards you for playing a lot, as it can take awhile to get a lot of them.

Each character also has two specials that can be switched between as well, with them being specific to that character. Johnny Savage uses his guitar to either summon a beast out of the ground in a small area with a small cool down time, while he can use his much more powerful one that pretty much kills anybody in the vicinity with his guitar that has a much longer cool down time. Ninjaw has one of the funniest special attacks, as she can actually throw sharks at the enemy. The cooldowns can take awhile, but thankfully the map is filled with pickups, including those that reduce the cool down period. The game also offers a once per match hand stab attack that can change the outcome of the game, which can be somewhat frustrating at the last minute.

Outside of the tutorial, Drawn to Death is exclusively an online shooter. The problem here though is that it was very difficult at times to find a match without waiting awhile. Adding this on top of the decently long load times when starting up the game each time where it says it is looking for updates, you may be waiting awhile from booting the game up until you actually get into a match. Before starting, you will be told how long is estimated, but it usually takes a good bit longer. If the game has been designed to include bots, that could have helped, though thankfully you can play with only two players if it’s hard to find four total.

At the start, you can only participate in either unranked games or custom games that are made up of either free-for-all or 2v2 matchups. Custom games let you invite friends to play with whatever game type you prefer, but unranked is completely random in the game type. Drawn to Death offers your usual game types, including Deathmatch and Team Deathmatch, along with with two others known as Brawl and Organ Donor. 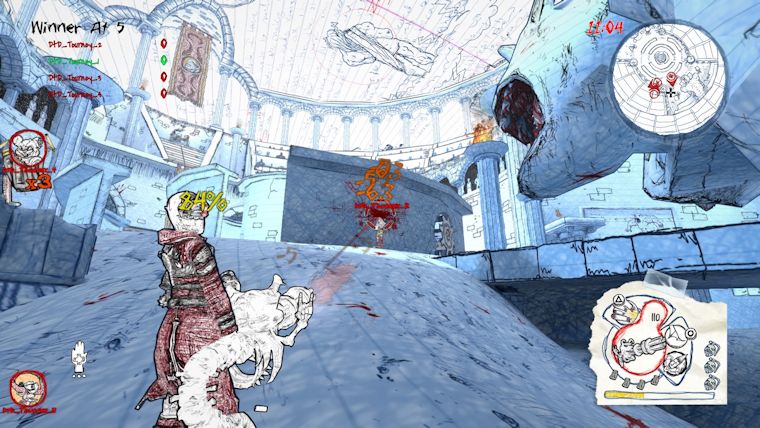 Brawl basically takes the elements of Deathmatch and puts them strictly in a 1v1 setting instead of having up to four players. Organ Donor is essentially a mix of capture the flag and controlling points, where you will capture organs found on the map and then must go to a set point and survive for a few seconds until you earn the points. What is pretty neat is that if you die, you can instantly respawn with only 50% life, though you will have to wait longer to fully respawn upon dying again. This is a useful tactic and is something not usually seen in a game like this.

After playing five unranked matches, you can then move onto ranked, though you still have no choice on the game type. The fast paced gameplay can be a lot of fun at times, but the long wait for each match and repetitive gameplay as a result of the similar design of the maps can help to dilute that enjoyment rather quickly.

Drawn to Death’s visual style is a perfect fit for the type of game that this is trying to be, but where the game really falls flat is the tone and attitude surrounding the visuals. As aforementioned, the visual style itself is really good at setting up something that is different from the norm, but then the dialogue goes and ruins much of that potential.

From the very start, you can tell that Drawn to Death is trying to come across as very vulgar and immature, but the issue is that it tries to go a little too far. From the opening tutorial to each individual match, you’ll have the game’s announcer basically screaming at you with comments that come off as trying way too hard. There are some moments where this is actually kind of funny, such as the game telling you that you can reload by yelling into a microphone in the controller before calling you an idiot for trying to actually do it. If they have toned this down a bit, it could have been somewhat acceptable, but the way it ends up is beyond obnoxious to the point that you will wanting to mute your television.

David Jaffe has always been known for games that can be a bit over the top and Drawn to Death may be the most extreme example of that to date. The notebook art style is very unique and works well with the varying character roster throughout the fast paced arena matches. However, the long wait times and crass humor used to make Drawn to Death seem edgy really drag down the experience as a whole.