The latest news in the world of video games at Attack of the Fanboy
June 23rd, 2014 by Anthony Decicco 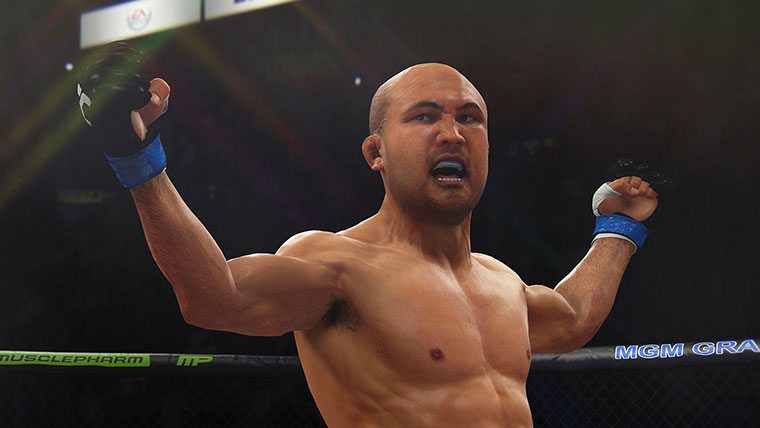 UFC Fighting is an ever growing sport all across the world. The realism, the grit, the toughness, it is a sport where the outcome can be decided in a split second and has to do with an ever growing array of fighters. A few years ago it was decided that EA Sports would continue the UFC games that were popular with the Undefeated series of titles from THQ. Can EA Sports deliver a gripping style of gameplay and bring the spirit of UFC to gamers everywhere? We find out in our review of EA Sports UFC.

EA Sports UFC follows a lot of the same formula that the Fight Night series had in the past, and it makes sense. EA Canada developed Fight Night Champion, and the similarities are evident. Following a largely successful blueprint, UFC pays great attention to the small details of the UFC. Giving fans an opportunity to journey into the wholly believable world of the UFC. These small details start with creating a character, and there are plenty of options to choose from.

UFC gives you a lot of freedom in creating your fighter, at least in the male division. You are given the option to choose from current fighters or create one from scratch, you can also upload a GameFace from the online servers if you are so inclined. Once you’ve got a character, a robust in-depth tutorial is a must-play for those getting ready to enter the Octogon for the first time. Though the bread and butter mode that players will spend the majority of their time in, is of course, Career mode. If you choose to create a character for this mode you will edit their first name and choose from a list of last names and nicknames for the fighter, as well as which one of the six different fighting styles is the right one for you. The creation itself is rather robust with varying styles and shapes. Towards the end of creation you are also able to create your own entrances based upon very limited options, clothing, and entrance music. Still, there’s an attention to detail that is appreciated. 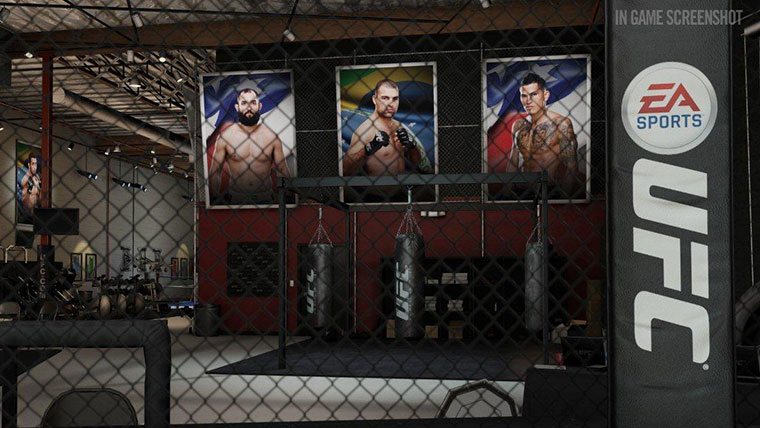 The Career mode is a very intricate centerpiece of the whole EA Sports UFC puzzle. You start out by training exercises which will become a basic part of the career mode. Training exercises will be where you earn small amounts of XP to level up your fighter. You’ll earn evolution points to distribute to your fighters attributes and purchase new moves. And just like real life, you’ll get invited by Dana White to participate in an elimination match for a spot on ‘The Ultimate Fighter’ television show. Once you win and earn your spot, you’ll work your way through the bracket, while training in-between matches to win the crown of Ultimate Fighter and earn a spot on the UFC roster.

Once you do, you gain your first level up and ability. Each new ability is earned via leveling and only a set amount can be equipped at a time with a maximum of five. They are distributed between three categories, ground, stand-up and physical. The abilities vary and allow you to mix and match, so if you want to have a great stand-up game you might equip abilities that allow you to do more punch and kick damage. These ability sets are categorized as Game Plans and require you to equip one on your fighter, you can create up to three Game Plan loadouts throughout the course of your Career. As you enter the meat of Career mode and work your way up from the undercard, you will also begin to earn fans. Fans determine the types of sponsors that are available to you — better sponsors give you better apparel to wear during entrances and such, so it is mostly for aesthetic reasons, but again, it’s just another one of the many small details that EA Canada has nailed in EA Sports UFC. An interesting part of Career is that after each career fight your Longevity meter is displayed and is affected. It calculates the damage report of your fighter, such as significant strikes absorbed and length of fight, which effects the length of your career in the long run. The fighting aspect of EA Sports UFC is more intricate than any other UFC game before it. The gameplay feels more complex, where as previous iterations in the UFC brand have felt like button-mashers. If you try to do that same thing in this game you will get blocked and then massacred, whether that be by the AI or any self-respecting human player you may come across online.  The stand-up game and ground game are like two completely different entities. You are given many options in the stand-up game depending on fighting style, complete with special moves that are used by a combination of triggers, buttons and thumbstick input, to make up for a wide array of attacks. The same can be said for the kicks as well. You can even unlock and perform spectacular moves off the cage if you are so inclined to do so. The difficulty feels increased with the complexity of the overall gameplay, including how to maneuver through the various clinches, on the ground and standing up. Six different difficulties really make this challenging for even the most hardcore of MMA fans. The tight gameplay starts losing some luster when you enter submissions, these really feel hit and miss and become mini-games of no skill at all. Hopefully future UFC titles will be different in that respect.

Although Career may be the premier mode in EA Sports UFC, it is not the only one. Challenge mode allows you to work on specific aspects of the game. It is very similar to the Career mode’s training segment, except you are given a specific fighter instead of choosing or having your own created fighter in the mode. It allows you to progress through the levels of each challenge, but doesn’t give you any XP or bonuses for completing them.

Online players can choose simple unranked head-to-head fights via Quick Match. Rivalries are friendly matches against people on your friends list. The meat of the Online is in the Championships mode though, which has you play in tournaments or ranked matches online in various weight classes for points to level up. It is similar to the online from previous Fight Night titles, and players whom have played those will be very familiar with the layout. The online feels active and players won’t have a hard time finding a match, and that’s assuming that fans stick with the game in the weeks and months ahead.

EA Sports UFC has jumped leaps and bounds from previous iterations with the improved gameplay and presentation that is second to none. That is not to say that there aren’t a few missteps along the way. The game on Xbox One felt choppy in some spots, but not unplayable. The female fighters are a great inclusion in the game, however, they aren’t playable in the Career mode, nor can players create female fighters. You can only play as a female combatant in the Play Now or online modes, and only in the Bantamweight (W) division. It seems like a very limited inclusion, as the features aren’t nearly as robust as their male counterparts.

EA Sports UFC really is the next step for UFC in gaming. You’ll really feel a part of the UFC world. The presentation is fantastic, with videos from various fighters and trainers talking to the player is a really nice touch. The graphics and sound add to the atmosphere to every fight, as you will hear every hammerfist, flying kick or elbow throughout the game. EA Sports UFC is a must have for any fan of the sport, despite the few shortcomings that it may have. Also, it has Bruce Lee.