Enslaved: Odyssey to the West Review

The latest news in the world of video games at Attack of the Fanboy
October 6th, 2010 by William Schwartz 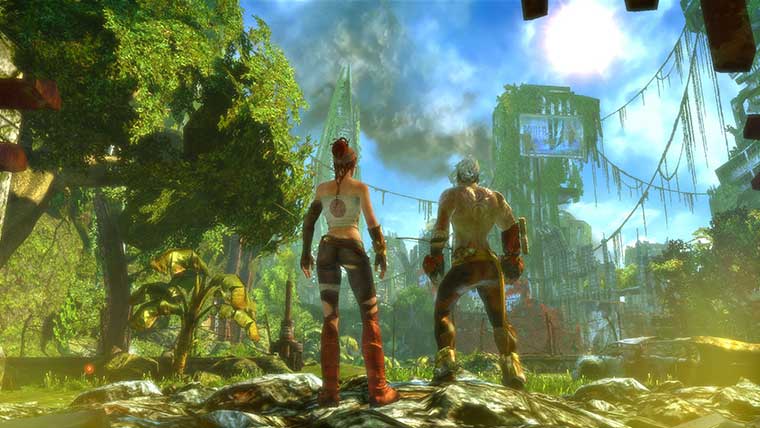 More than 150 years in the future, the world has transformed into an unrecognizable state where all that remains are a dwindling human population and merciless robots left over from wars long past. In Enslaved, players take on the role of Monkey, a strong and brutish loner, and his AI partner Trip, a technologically savvy but sheltered young woman from a peaceful community. Both become captured by a mysterious slave ship, which are rumored to harvest people and take them out west never to return. As they each attempt to escape, Trip realizes quickly that Monkey, with his raw strength and power, is the only hope she has of making the perilous journey back home. She hacks into a slave headband to enslave Monkey and link them together – if she dies, he dies. Her journey has now become his. Players must make sure both Monkey and Trip work together as they skillfully navigate through the world and survive against the dangerous enemy obstacles that lie in wait. Monkey will deftly wield his trusty staff weapon to attack and defend against enemies, using a combination of melee attacks, blocks and counters. He will also be able to perform spectacular takedown moves, allowing him to rip an enemy apart piece by piece, take its weapon for his own use or destroy it in one final blow. [Namco Bandai Games]

A few months back one of the developers at Ninja Theory was quoted as putting Enslaved on par with one of the graphical benchmarks of this generation, Uncharted 2.  It’s no doubt that Enslaved is a beautiful game.  From the moment you first fire up and set out on your journey, your eyes are in for a real treat, because while its comparison to other titles is up for debate Enslaved stands on it’s own in this department.  Your journey will take you through lush urban settings that are now being taken back by nature.  Enslaved also does well by incorporating a great sense of height.  Which is really important in a game that has you climbing around like a, well… Monkey.

Which brings me to one of my favorite and hated things in the game.  Ninja Theory sacrificed difficulty when programming the climbing sequences in Enslaved.  No, breath a sigh of relief as you will not be plummeting to your death in this game. Much of the title requires the player to navigate from strategic climbing point to strategic climbing point as notified on screen by the glow around a particular object.  If you can’t make the jump, no problem, Monkey will just stumble around until you the player find the route for which you need to take.  Which I think is a great way circumvent the traditional pitfall mechanics and trial and error that most games of this nature seem to use. Better used is a more cinematic display when climbing floors and walls will crumble, sending monkey scrambling for footholds and survival depends more on quickness than precision.

If you like third person action titles, but think you have seen all to see, Enslaved is definitely unique on many fronts.  While the futuristic robots take over the earth story has been told hundreds of times, somehow, someway Enslaved gives it a colorful fresh coat of paint and packs in some truly unique gameplay mechanics that keep the game both fresh and fun throughout.

Enslaved is not a long game.  On normal difficulty settings you are likely to invest around nine to ten hours of your time.  That being said the game is fairly easy to complete and can be completed in just a few short sessions.  One of the major reasons that gamers might not get many sessions out of the title though, is it’s engrossing nature.  The story progresses nicely and will keep you engaged and pushing on to learn more about the characters in the story.  Not only the story, but as new gameplay mechanics are introduced throughout the game, it’s a title that’s hard to put down at some points.  And that’s never a bad thing.

Enslaved tries to do many things, it incorporates a great story, unique and interesting characters, a nice blend of action and platforming, and even some puzzle aspects.  One aspect where the game could have seen some definite improvement is in the games rudimentary puzzles.  With little to no challenge involved in progressing the game it becomes less and less like a video game and more like an interactive movie.  Along your quest you will find 10 -20 spots where a block or some other object must be moved by Monkey to clear the way for your AI companion.  Press B dead lift up, rinse and repeat over and over.  It’s something that is unnecessarily repeated. I kept waiting for a time for something to jump out at me or for it to be used in way that was different but surprisingly it was not.

Enslaved has some serious issues in the a few very important spots for a third person action platformer.  First and foremost, the camera angles will try you patience on more than one occasion, more than likely per level.  In a game that is somewhat built around finding routes to climb and ways to move your team from point A to B it’s often times hard to find these waypoints. My personal frustration in this regard likely stems from the world of Enslaved.  It begs to be explored, and you are somewhat limited in this area.  As also mentioned throughout this review, the lack of consequence for mistakes in Enslaved is something that takes the game out of video game.  While many of the combat sequences are more fun to watch than play, many of the characters seem somewhat uniform and I would have liked to see a lot more variety in the slaver race.

Without any consequence Enslaved seems to hold your hand at nearly every moment of the game through the good and the bad.

Enslaved is a tough game to review.  If you like a challenging game that requires thought, and precise input to your controller Enslaved is probably not for you.  On the other hand Enslaved is a great interactive experience.  Minimal input and little to no consequences for mistakes make Enslaved a stress free romp that is absolutely gorgeous and somewhat interesting and entertaining.  But it really comes down to how you like to play games.

Enslaved: Odyssey to the West