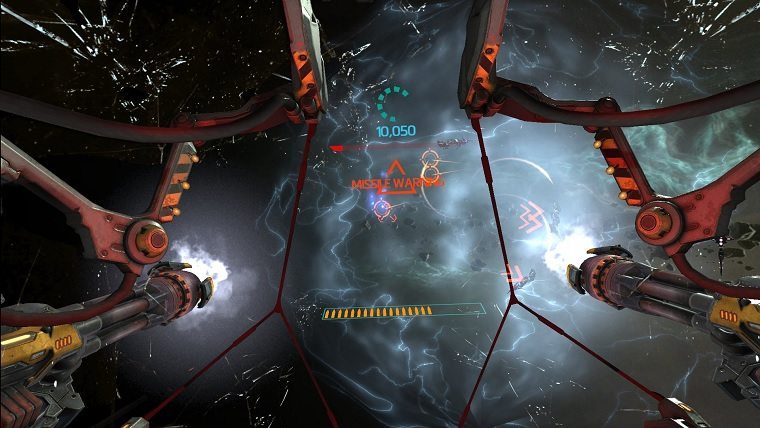 EVE Online has been offering one of the most expansive universes in gaming since its debut more than a decade ago, with the space combat based EVE: Valkyrie offering a different perspective when it released for VR platforms throughout 2016. A more simplistic arcade style shooter was also released as EVE: Gunjack, which has now made its way to PSVR as well.

EVE: Gunjack was originally released earlier in 2016 for PC to be used by Oculus Rift and HTC Vive, but it also was available for Samsung Gear VR as well, so it definitely is a good bit more limited than the other EVE titles. As a result, EVE: Gunjack is a very basic experience that feels very much like a mobile game.

The game puts you in control of a turret that is part of a stationary ship, with you only able to move the turret itself in different directions. This is done by moving the PSVR headset left, right, up, or down to move the shooting target that is on the screen at all times. Moving the turret feels very natural and responsive, which is necessary in a game as fast moving as EVE: Gunjack can be.

Beyond the movement of the turret, there are very few buttons to worry about. Pressing the right trigger will fire your turret itself while pressing the left trigger will activate any collected power-ups, along with square as the reload button. The goal in each stage is to destroy as many of the enemy ships as you can, while also making sure to stay alive. There is a health power-up that will repair your turret, while the rest are mostly focused on helping you take down enemies.

Power-ups like homing missiles are to be expected, but EVE: Gunjack adds in others that can really save your skin sometimes. The smart bomb takes down most everything on the screen, while the beam laser can obliterate enemy forces with ease. The stasis field was a personal favorite, which slows down all enemies in the vicinity of the stasis field for a certain period of time. 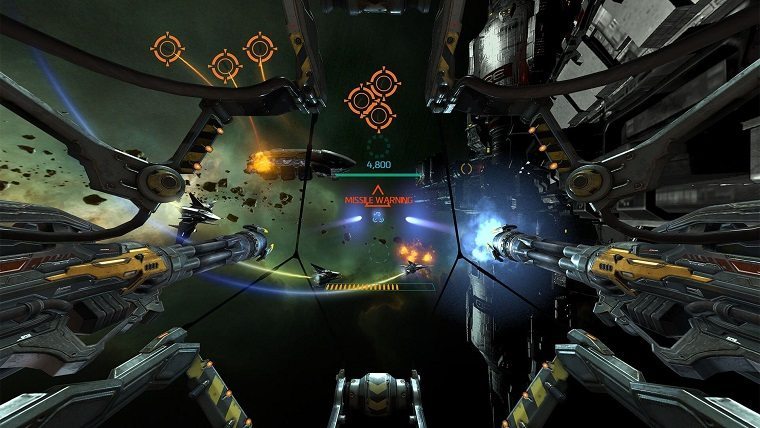 These power-ups show up quite often and mix up the different levels, but sometimes the gameplay can feel a little too monotonous. A few different enemy ships show up over time, but most of the time you are just holding the right trigger down to take down the ships without much problem. Some of the levels can get a bit overwhelming when you are barraged with kamikaze style ships, which can up the intensity. However, there is not much more you’re going to experience beyond the first few levels, except for special stages like one where your goal is to destroy asteroids and collect ore.

Following the path paved by popular mobile games like Angry Birds, EVE: Gunjack is split into short individual stages in which you can earn three stars each. There is also an additional master rank you can earn in a level, but you do not get anything special other than the ranking being plastered over it on the level select menu. There are a grand total of 22 levels, which may feel kind of short for a game like this, but each level is at least going to take a few minutes to beat, with that time increasing the deeper you get into the game.

One aspect that may get annoying for some is that the levels beyond the first few require a certain number of stars earned to unlock. Earning two stars on each will get you pretty far, but you will have to step up your game near the end, including needed 50 total to play the last level. This isn’t terrible, considering there are 66 total in the game, but it definitely may require a little backtracking to gain access to these last few stages. 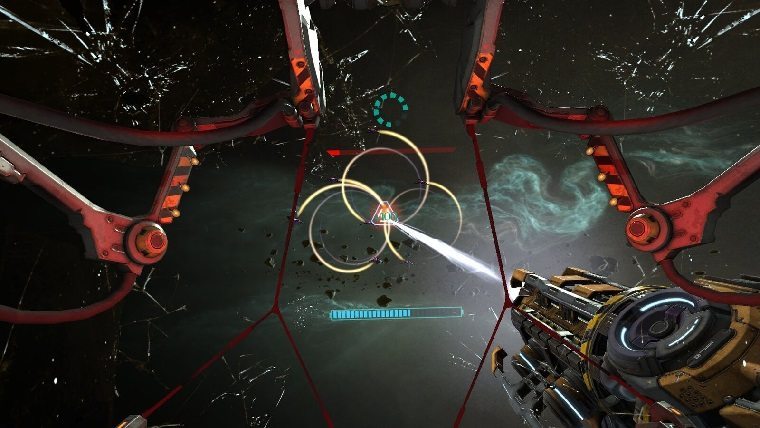 Unlike EVE: Valkyrie, Gunjack features a much more singular experience. Beyond a tutorial and the 22 levels in the game, there is nothing else to experience. This is very likely due to the game’s mobile game like roots on the Gear VR, but it would have been nice to get something a little extra that could give the game more replay value beyond the first playthrough that won’t take very long at all.

EVE: Gunjack is the second game of the year to build upon the pre-existing EVE universe, though this one is the most bare bones of the bunch. While the turret controls are very polished and the power-ups are a lot of fun to use, the gameplay itself can become tedious after awhile in the rather short EVE: Gunjack.