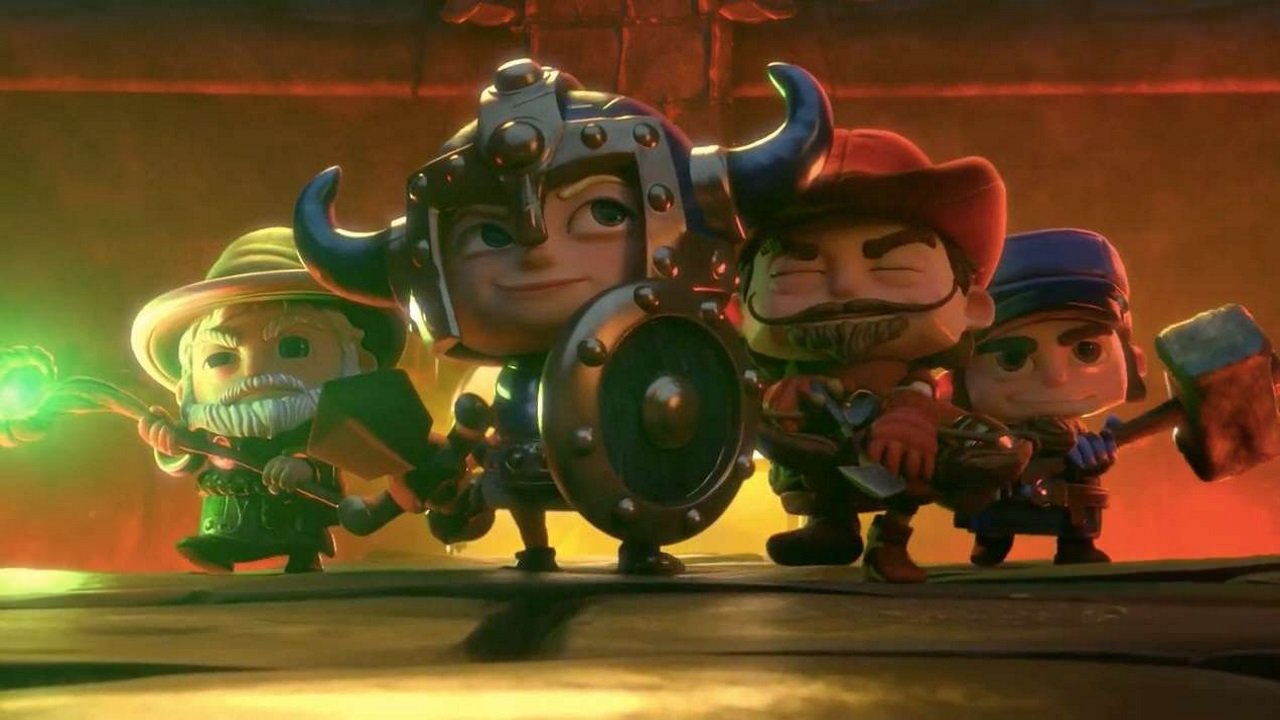 Fat Princess was a bit of an underrated classic on the PS3. Featuring a unique world, full of color, humor, and violence, along with some interesting online multiplayer mechanics, the game was a pioneer for the system, and its fledgling PlayStation Network. Now, Fat Princess Adventures, the sequel/spinoff of the original has arrived on the PS4. It brings players back to the humorous and colorful world of the original, but in a very different way this time. Unfortunately this new spin takes away a lot of what made Fat Princess so much fun to begin with, leaving players with a standard hack-and-slash in a slightly interesting world.

Fat Princess Adventures borrows a lot from its predecessor. You still have to save the cake obsessed princess, however you are no longer facing off between the two warring factions of red and blue. Those two have united to form the kingdom of Great Bitten (puns are a BIG part of the game), and you are tasked with fighting off the army of gobblings that have been sent out by the Bitter Queen.

While the general story remains the same cliche filled affair, the gameplay has seen some massive alterations from the previous game. Online versus multiplayer is gone, being replaced by a more linear adventure game. There is still multiplayer, but it is of the cooperative variety, with four players teaming up to fight against the horde of monsters. 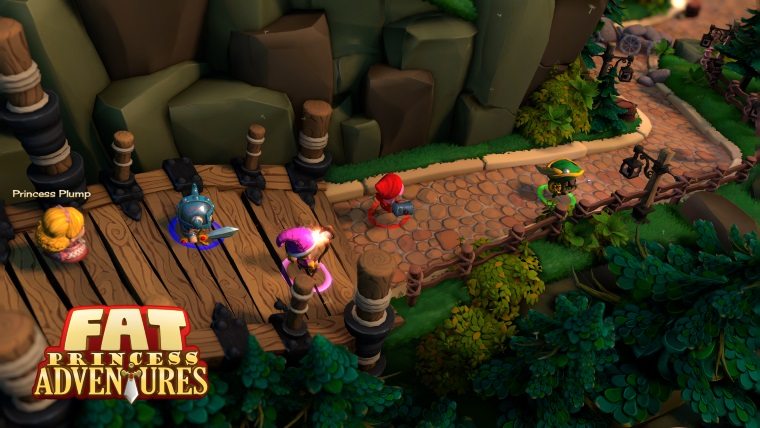 Classes are still there, but they have been trimmed and toned down a bit from the last time. There are now just four classes, two ranged and two close quarters. You can even switch between them at will whenever you come across a checkpoint, which allows for varying strategies mid-mission, and greater variety. Each is different enough to warrant inclusion here, and the various weapons and gear that you’ll pick up along the way will make your own character feel unique amid the sea of lookalikes. You can even customize that character quite a bit at the start of the game, going so far as to give them a unique attitude, which will determine which funny quips they throw out during gameplay.

These lines, and those of other characters are actually pretty humorous, making references to pop culture, and spewing phrases that will elicit a chuckle or two during your time. However, the humor is a bit one note, and lines will get repetitive pretty quickly. New story elements might deliver some fresh material, but overall you’ll become tired of the same jokes after just a couple of hours. For a game that relies so heavily on replayability this is a bit tough to overlook.

This repetition is a bit of a theme for Fat Princess Adventures though. The original game was PvP focused, and offered replayability in the different strategies that players could deploy. With a more linear adventure game though that option is gone. Now players are left with simplistic combat, involving just a couple of buttons and only changing based on the class and weapon equipped, and very straightforward level design. 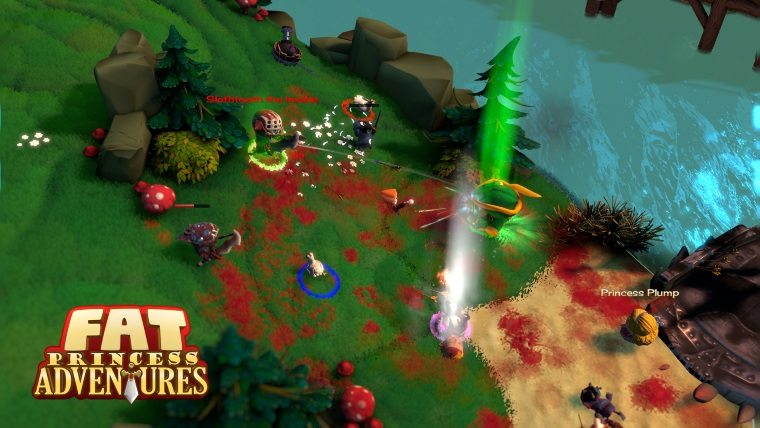 Playing more like a hack-and-slash adventure, Fat Princess Adventures feels like it needs something extra to truly gel and become a fun game in its own right. Without the fun atmosphere, the game would be downright boring, as players simply wander around the map, moving slowly toward their objective, and slaughtering enemies over and over again along the way. The combat has little to nothing that actually makes it fun, so you end up just repeating the same patterns over and over again until a new, bigger enemy shows up to change things around.

There’s a couple of things to alter the formula, such as potions that drop, allowing you to toss them at enemies for various effects. There’s an overdrive mode as well, which powers up your character, though it has little impact other than making combat go a bit faster. Finally, you can also eat cake for health, and if you eat some while at full health you go into a sort of hulk mode, where you do a ton of damage by whacking enemies in the face. You’ll encounter all of these things so often, and so early in the game though that they will feel just as repetitive as the base combat once you’re a few hours in.

This repetition can easily work in a game like Fat Princess Adventures, we’ve seen it before in Diablo and other hack-and-slash style games. It’s just that the PvP multiplayer felt so much better than what we have here. Also, the gameplay formula and world of Fat Princess Adventures just doesn’t feel robust enough to support something like this, with players not really caring all that much about the outcome of the story, or what weapons and armor their character is using, other than the stats associated with them. 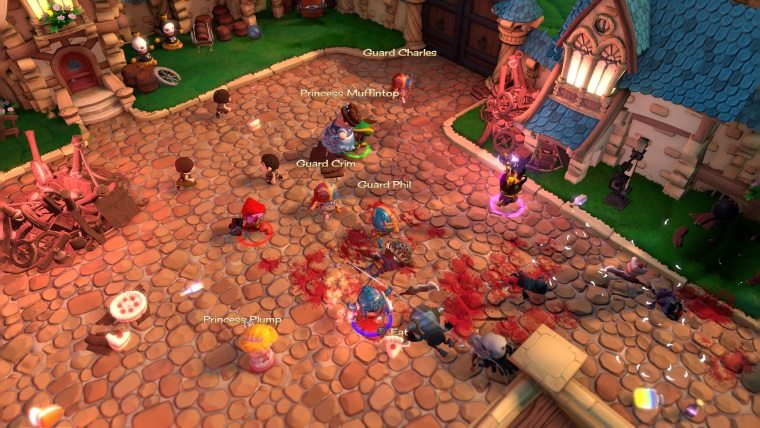 To break the repetitive pattern of the combat there are boss battles. These seem tailored for co-op play, as much of the game is. They’ll task you with various objectives, like putting a chicken onto a spinning wheel, which will power up the floor, electrocuting the large beast. However, one issue comes up, especially if you aren’t communicating well. The camera can only pull back so far, and both players need to be in the same window. So, if one player figures out what to do and the other doesn’t, or even if they need to split up for some reason, they might be constrained by the camera’s view of the scene, forcing one player to follow the other until their objective is within reach.

The humor and lightheartedness of the world are the main saving graces of Fat Princess Adventures, with the ultra-violence clashing quite heavily throughout the experience. It is this clash that generates the most entertainment in the game though, with characters spouting lines about death and murder, while hunting for pieces of cake to refill their hearts. The cutesy, kid game atmosphere might turn some away at first, but dig into it and you’ll find a truly mature experience hidden there.

Fat Princess Adventures is a sequel/spinoff that takes one step forward and two steps back. Moving to the PS4 brought all the usual enhancements to visuals, but the core gameplay was pulled back a bit, making for a more repetitive affair. The transition from PvP multiplayer to a more adventure style game has removed a lot of what made the original so much fun in the first place, and set players up for a game that is moderately enjoyable, but overall pretty lackluster.