The Flame in the Flood PS4 Port Review: An Apocalyptic Aesop

The latest news in the world of video games at Attack of the Fanboy
January 29th, 2017 by Joshua Evans 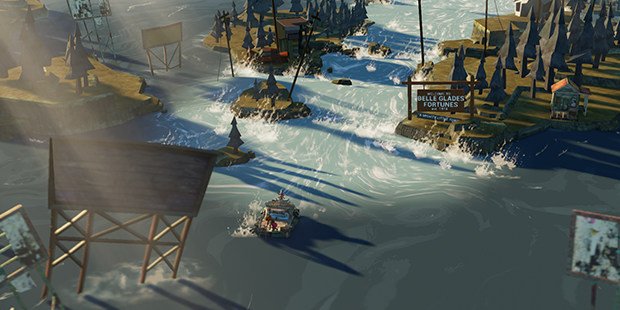 The Flame in the Flood is a post apocalyptic survival game by developer The Molasses Flood, taking place in America after most of it flooded. To set the game apart from other survival games that take place after everyone has gone and died in a cataclysmic event, is an amazing soundtrack, and a travel system that involves going down river in a barely cobbled together hand made raft. Oh, and the further down river you go the tougher it gets, Heart of Darkness style. Except they were going up river in Heart of Darkness, so that breaks the comparison a bit.

The aforementioned raft makes navigating the world to the beautiful soundtrack both an absolute joy, and mortally terrifying.

Story wise, The Flame in the Flood starts off strong. Our protagonist, Scout, finds a dog, which you can name either Aesop or Daisy, carrying a backpack with a radio. The objective from then on is to find some higher ground to hear the signal and, hopefully, find some more people. And that means heading down the river, in a very difficult to control, raft as you dodge obstacles and are left pretty much at the mercy of the river. Spread out along the river are different stops you can dock at which can be searched for supplies to keep you alive, and to upgrade your raft. Locations are kept interesting by the beautiful art style, and the fact that you probably are not paying them too much attention as you flee from various animals that would also very much like to refill their hunger meter. Quilts and, very rarely, people can be at these stops as well to help flesh out the world with stories of different events, but never really explaining what happened to the world. Which is good, because the game is more of a personal story then the story of the apocalypse it’s self.

Game play is the standard suite for survival games, but a few shticks make it different enough to be interesting. The aforementioned raft makes navigating the world to the beautiful soundtrack both an absolute joy, and mortally terrifying as the music cuts out and all you can hear is the hungry current crashing you into rocks. Upgrading your raft is rather important, because you are going to be spending a great deal of time with it. Most of the upgrades are fantastically useful, such as a stove so that you can cook and be warm even when the rain is pouring down. Hunger and thirst must be sorted, as well as sleeping every now and then. However the act of sleeping does not stop your hunger and thirst meters from going down, which I have not seen in a survival game before. Once you have figured out how to juggle all that, you will realize that spending too much time in the rain, or colder climates will result in your temperature dropping, followed by you freezing to death unless you reach a fire, shelter, or wear warmer clothes. Which is just peaches. To make things even more difficult, fire will scare away wolves, but attract snakes. So choosing between what you would like to escape from the most becomes an important game play mechanic.

Wounds that you suffer, which can range from lacerations, broken bones, parasites, and ant bites, can be treated Snake Eater style from a menu. Unlike Snake Eater, it does not pause the game so be sure you are away from danger when you do so, unless you want to stay in that menu until you run out of resources. Treatments are suitably low resources survival which is fun. Bandages made from torn clothes, stitching kits made from fishing line and fishing hooks, penicillin made from moldy meat, and my personal favorite snake bite curing tea. It adds difficulty and atmosphere to the game, further showing just how unforgiving The Flame in the Floods end of the world is.

And speaking of atmosphere, the game is full of it. The soundtrack comes in at all the right moments to make what you are doing feel all the more grand, vanishing all together whenever the game needs to terrify you. Visually impressive as well, with the art style giving everything its own look. Especially the wolves, which look much less majestic than they do in any other game, and much more bizarre and frightening. With their elongated limbs and scraggly bodies. The art direction and soundtrack are assuredly the best part of the game, and making it worth a look on those alone.

That all being said, the game is far from perfect. Bugs abound, sometimes minute such as the occasional animation not playing, other times extremely frustrating. Throughout the entirety of my play through, bears were glitched and would replay the stepping out of their caves animation over and over again regardless of what was happening. Dancing bears did make the game easier, but the occasional crash (especially at the very end!) will very much infuriate you. Wolves that jump through your traps will sometimes glitch in a manner that they get a strike in before being catapulted back into the trap and killed when the game realizes they should have been dead in the first place. If you were too close to your trap when that happened, get ready to use a bandage for all those lacerations you just suffered.

The Flame in the Flood can also be a bit too easy at times. For instance, collecting water from puddles causes it to be polluted, giving you negative effects from drinking it unless it is purified. However rainwater can be collected whenever it is raining and is not polluted. And it rains a lot, making water purification methods almost useless. Must be why everything is flooded. So you will never need to purify water unless you hit an area with low rainfall and you did not collect any at all from the previous zone. Also if you stop at almost every location you can, possible with a good bit of raft maneuvering, you will rarely be out of food. The camera will also inadvertently obscure animals, only being problematic with snakes as they do not move unless you have your torch out. Walking into a snake on your own stupidity is frustrating enough, walking into a snake that the camera has hidden is even more so.

Is it worth a go? I would have to say yes. The Flame in the Flood has amazing moments that stick with you and far outweigh all the annoying bits. It is beautiful at times, but also melancholy and grim in other moments. If you are looking for a difficult survival game, you will certainly get that, unless you find great deal of supplies early on. For about a third of the price of most Triple A titles, you get a decently lengthy experience that will stick with you afterwards, and is pretty replayable with the game’s Endless Mode, which goes on until you die, testing just how far you can journey down the river.

The Flame in the Flood