The latest news in the world of video games at Attack of the Fanboy
September 8th, 2015 by William Schwartz 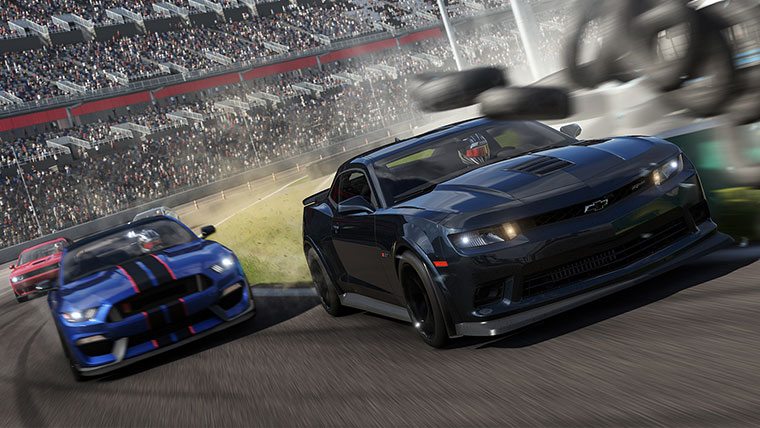 The Forza Motorsport series is one of the most highly regarded by console racing fans.  Few can match the attention to detail and feature set found in the Forza series, one that’s been continually raising the bar since its debut on the original Xbox.  The 10-year anniversary and the return of Forza Motorsport to the Xbox One in this sixth numbered entry is somewhat of a return to form for the series, which saw some backlash in the 2013 Xbox One launch title release.

The Forza series has always offered a robust slate of content to its players.  Forza Motorsport 6 is no different.  Turn 10 has re-tuned the progression systems for single player, added new online modes to the game, put together a massive list of tracks and cars to drive, and endless ways to customize them — all in the 1080p 60fps presentation that is expected from a racer of this caliber.

No matter which of the many modes you choose to play first, the most readily apparent attribute of Forza Motorsport 6 is the visual presentation.  This game is a stunner on Xbox One.  Both the recreated real world tracks and fictitious ones look fantastic, and appear to have more detail than what we saw in Forza 5.  Interior and Exterior car models look equally great, with incredible lighting effects on the day, night, and rainy tracks.  Oh yeah, we forgot to mention, Forza now has night racing and rainy weather, two welcome additions.  Resolution and frame rate hit the lofty 1080p 60fps target without a hint of slowing down.   Every inch of Forza 6’s visual presentation is beautiful.  From the menus and Forzavista mode, to the in-game racing — Forza Motorsport 6 may be the most beautiful game to arrive on the Xbox One to date.

On the track, Forza feels a lot like it has in the previous iterations.  Spot-on controls with plenty of options in terms of which assists you want to use make racing enjoyable regardless of your skill.  No matter what mode you are playing, you are constantly earning credits that can be spent to purchase vehicles, modify or paint them, etc.  Credits can also now be used for things called Mod Packs as well.  These packs come in different rarity tiers, and can have a big impact on any given race.  Mods can be used in three slots and are color coded for Crew (Blue), Dare (Purple), and Boosts (Green) .  Crew mods can give you bonuses to your car’s attributes and depending on the mod will give you an even bigger bonus on specific tracks.  Dare mods, will take away attributes or make it harder for you to hit your race objectives, but doing so with the mod equipped will earn you more credits.  While Boosts earn you extra credits for completing specific objectives like perfect passing or cornering, as well outright bonuses to credits and XP.  Some of these mods are one-time use, while others can be used multiple times. 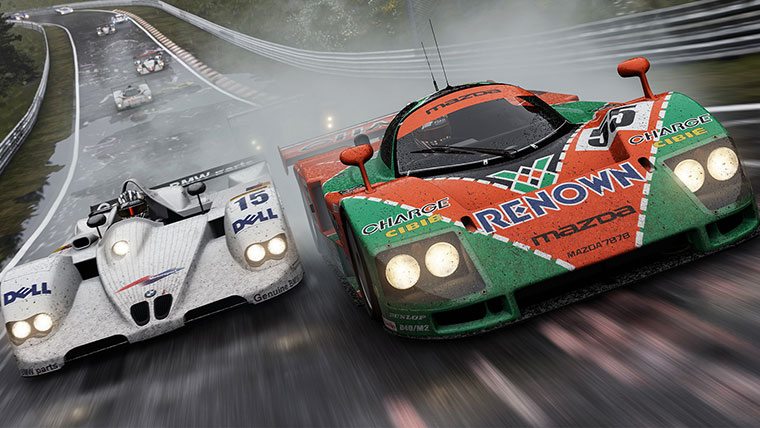 The two biggest differences in the racing itself is the inclusion of the rainy and night racing tracks.  These will be found intermittently in Career Mode, and can be chosen at will in online modes, as well as in the free play mode.  Both are equally well done, and add a different element to the racing.  Though the rainy racing feels like it changes the game most significantly.  3D puddles collect on the rainy tracks, adding yet another obstacle to tackle.  Hit a puddle at the wrong trajectory or speed and you’ll lose control of your car.  Rain beads off windshields as wipers try to remove it while barreling through tracks at breakneck speed.  Rainy tracks in Forza Motorsport 6 are beautiful and treacherous.  Night racing is equally dangerous, no matter how many times you may have raced the track before — there are less landmarks to remember, giving you more opportunity to miss your line or a fast-approaching turn.  Neither night racing or rainy weather is dynamic.  Either these options are on to start the race or they are off, there is no transition to night racing, nor a transition between wetness conditions.

Career Mode is the main attraction on the single-player side of Forza 6.  It’s structured familiarly but not identically to previous entries in the series, giving you a chance to tackle various race events that feature a number of different car classes.  As you progress you’ll race bigger and better cars.  But, it’s structured somewhat differently, built around “Stories of Motorsport.”  Within this mode you have a number of different classes and then sub-classes to choose from when completing challenges within.  And as you progress along the Stories of Motorsport Career, you’ll also unlock Showcase Events that let you drive different types of cars as well. The Stories of Motorsport Career gives you ample opportunity to earn credits to stock your garage full of vehicles, of which there are over 450 in Forza 6. 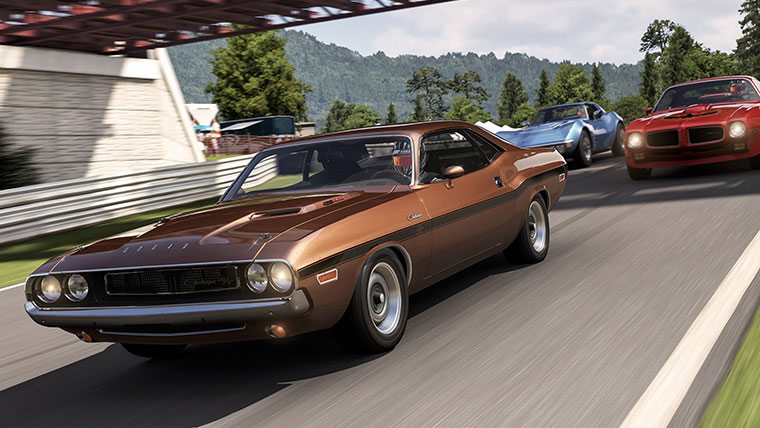 Where Forza Motorsport 5 felt like a grind in progression, 6 feels a little more player-friendly in this department.  They’ve gone as far as adding Horizon’s slot machine style reward system when you hit new driver levels to throw even more credits, cars, and other goodies at the player.  Credits can be earned through turning down assists, through the aforementioned mod packs, through driver affinity challenges, just completing races and driver levels, as well as other avenues.  You’re still not going to be purchasing high-end cars in the first hours of Forza Motorsport 6, but you might win one in a free spin, or enough credits to buy whatever you desire.  For those that have no desire to unlock or purchase vehicles, Test Drive and Free Play mode allow you to rent cars from the Forza garage to use on any track, of which there are 20+ real world and fictitious locales, each with variations.  However you wish to play, Forza 6 feels like it’s stuffed to the brim with cars, tracks, and modes to use them in.

While the Kinect ushered in the era of Forzavista, a place where you can check out the nooks and crannies of each vehicle in the game, the mode has never been more robust than it is this year.  Forzavista features over 450 cars that can be inspected in the Forza garage, with each allowing you to explore the vehicle, open its doors, hood, and trunk, and even listen to an audio-byte about the vehicle itself.  Forzavista is an equally impressive screen-saver with pleasing music and beautiful shots of the cars themselves if left unattended. 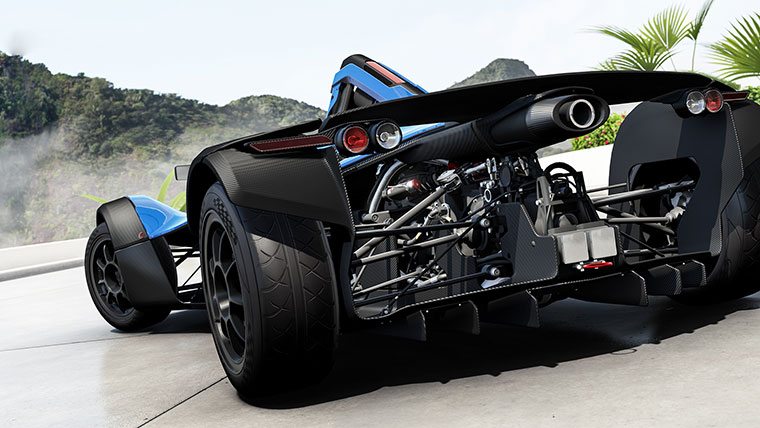 Almost everything that Forza fans have traditionally loved about the series returns in Forza Motorsport 6.  For the competitive players that really want to dig into the game for the very best lap times, the tuning and customization options are as robust as they’ve ever been.  For designers, cars can be painted and designs can be handcrafted.  Both car designs and tuning options can be downloaded or uploaded at the in-game marketplace.  Sadly though, the Auction House has not returned.  The place where Forza players could sell their creations to others was a novel and fun idea on the Xbox 360, but has not returned in a few iterations.  There’s really nothing that’s taken its place, the auction house was a game within a game, but unfortunately there’s been no sign of the popular online feature returning.

Heading online in Forza 6 there are both new and old elements to explore.  Straight match-made races or private matches can be accessed across a variety of different modes and settings.  Private matches give hosts the ability to customize a plethora of different options to fine tune the experience for your party. A new feature to the game is online leagues that players can participate in to race in divisions against drivers of similar skill levels.  As your skill increases, you’ll progress into higher divisions for stiffer online competition.  Most of the match-made matches are of the racing variety and broken into specific class instances, or challenge type instances like Drifting.  There’s also a tag mode called Virus for those that want to do a little more than just race from point a to point b.

This is Forza Motorsport 6

Unfortunately, we had issues with connectivity during the review of this game where we were supposed to connect with developers and other reviewers.  It’s unclear whether it was simply a connection issue on our end, or if Forza servers were having problems.  It’s also not clear whether these problems may affect others when the game launches to a much wider pool of players.  If it does launch problem free and this is a one-off issue, Forza Motorsport’s online offering should keep players engaged long after the single player career is over.  Though so many games have launched to issues in recent years that it wouldn’t surprise if it had some bugs to iron out at launch.

Forza Motorsport 6 sets a new bar in terms of  visuals for a console racer.  A more player-friendly progression system in single player and new online components compliment the massive track and car list.