Gods Will Be Watching Review 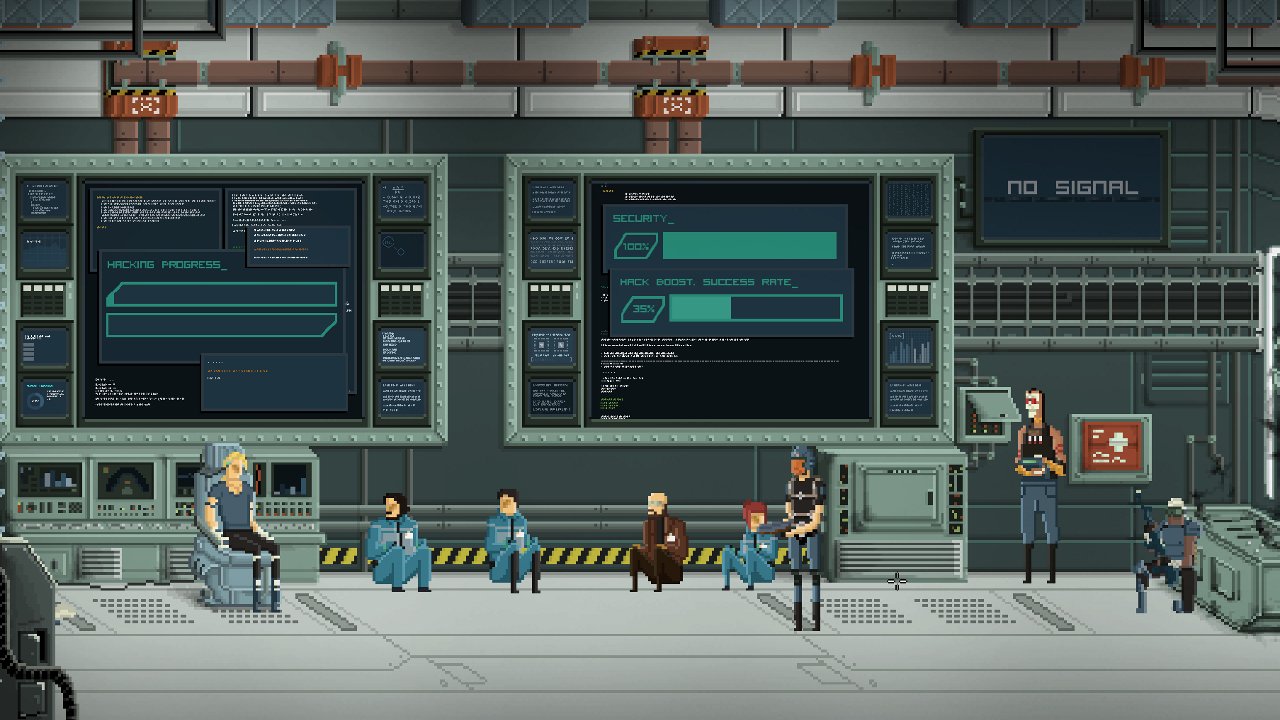 The experience of playing Gods Will Be Watching isn’t something that I would describe as fun. It isn’t intended to be, it is a hardcore survival simulator that requires you to manage your time, resources, and people in situations that will frustrate and disturb. So, since it isn’t meant to be fun, is it at least a powerful, dramatic, and coherent experience? Unfortunately the answer to that is “not really”.

Make no mistake, you will be doing a lot more dying than winning

Describing Gods Will Be Watching is a little tough since it isn’t like a most other games. It is a point-and-click adventure game that focuses on the idea of survival, giving you missions where you either win, or you die. And make no mistake, you will be doing a lot more dying than winning. You must manage multiple elements and delegate your time properly or you’re going to end up replaying the entire mission all over again.

The best way to explain the game is to go over the first mission. Gods Will Be Watching opens with you and a group of teammates storming a facility, trying to hack their database to get some important data. You are tasked with keeping an eye on the hostages, managing your supplies, and telling the other characters what to do, such as firing on, or negotiating with the advancing unit of guards. 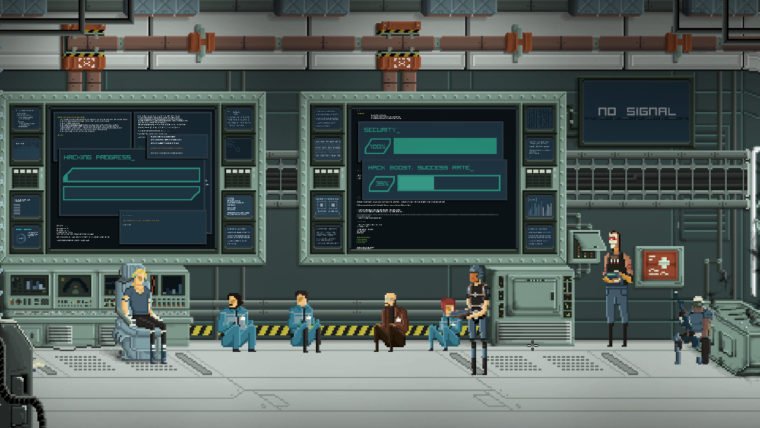 Almost every action uses up some amount of time, which then causes everything else to react. If the guards are too close you can have your teammate fire on them, but that will stress out the hostages who might then try to attack you. Your only hints at how to manage the hostages are subtle queues, such as a text blurb or their sitting position. These seem to be fundamentally broken though as hostages will attack or flee sometimes without warning. If all the hostages are dead the enemies will storm in, so you have to keep them calm and alive long enough to complete your task. The whole time you are doing this you also have to monitor the computer’s security measures, and decide if you want to risk speeding up the hack, which could do more harm than good.

This is just the first mission out of six included in Gods Will Be Watching and they are all painfully difficult. Most of the underlying mechanics are not adequately explained to you in the beginning, leaving you to figure out why the enemies keep storming you so quickly, or why that hostage attacked you. Once you fail, which will happen a lot, you get the barest hint as to why, such as “your strategy was too soft”.

Trial and error is the basic mechanic by which you will learn in Gods Will Be Watching. Every mission is different from the one before, so you go into each one fresh, having to relearn the mechanics hidden away behind the game. Trial and error is almost always a frustrating gaming experience, so the fact that Gods Will Be Watching relies so heavily on it will likely deter a lot of people. Due simply to its unique nature it could have been an interesting experience though, had the developers at Deconstructeam done anything to dampen the more frustrating elements. 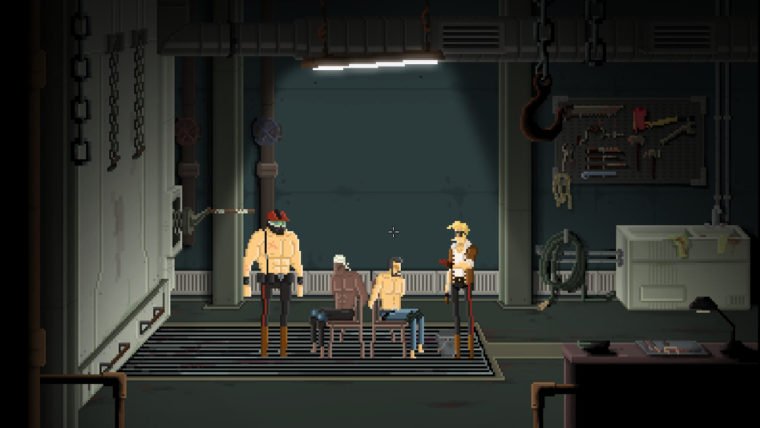 Instead they doubled down on the frustrating game design and added in random chance on top (UPDATE: this has been somewhat helped by a post-launch update called The Mercy Update). Getting a little into spoiler territory here, there is literally a scene on the second mission where you are forced to play Russian Roulette. This takes place about 15-20 minutes into the mission, and there is almost no way to get out of it without taking a couple of chances. This means that you have a one out of seven chance of erasing the last 15-20 minutes of gameplay because the dice didn’t roll your way. Regrettably, this is just one example of the multitude of frustrating situations that Gods Will Be Watching forces upon you.

There is a difference between being difficult and just being annoying

While I understand that the developers were intentionally making a difficult game, there is a difference between being difficult and just being annoying. Making you play through a tough situation, forcing hard decisions and risking the entire mission on a roll of the dice can be great game design. The problem is that Gods Will Be Watching relies on it so heavily and does nothing to make it tolerable, such as adding in checkpoints during the mission. I can see how the developers might feel like checkpoints defeat the purpose of what they were trying to do, but that is little solace to a player who just saw 30 minutes of gameplay get wiped away because of a bad roll of the dice.

If checkpoints were too much, at least make it so you can skip the dozens of lines of dialogue and slow animations that play out every single time you restart a mission. They let you skip the opening scene for the first mission, which gave me hope for a smoother experience, but every level after that forced me to frantically click through the repetitive dialogue that I had already read the previous five times. 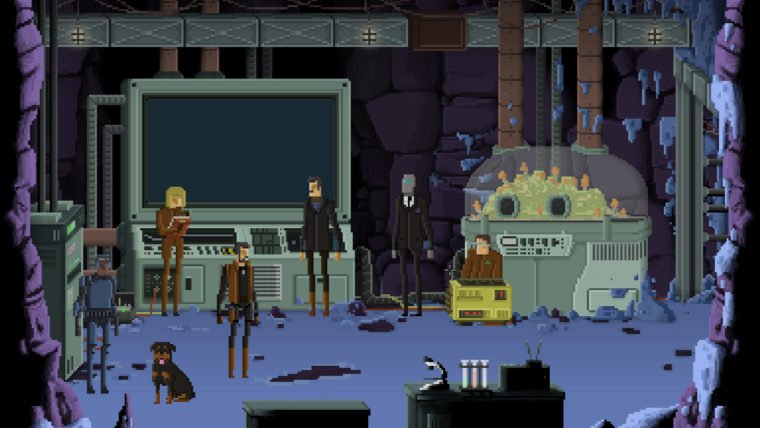 Sadly that dialogue does little to enhance the experience anyway. The story involves warring factions in a galactic empire. Much of the plot makes little sense unless you pay extremely close attention and read through every bit of dialogue, multiple times if necessary. Near the end of the game the story tries to take itself much more seriously, adding in existential elements that somewhat explain the ridiculous difficulty of Gods Will Be Watching. But it is too little, too late, and actually goes against its own message near the very end of the game.

Gods Will Be Watching is certainly a unique experience that is unlike most other games on the market. The only problem is that other games aren’t like this because it is a fundamentally flawed game design. Rarely has trial and error gameplay been fun, and to add random chance on top is almost insulting to the player.

Gods Will Be Watching