Gods Will Be Watching Mercy Update Saves Players From Frustration 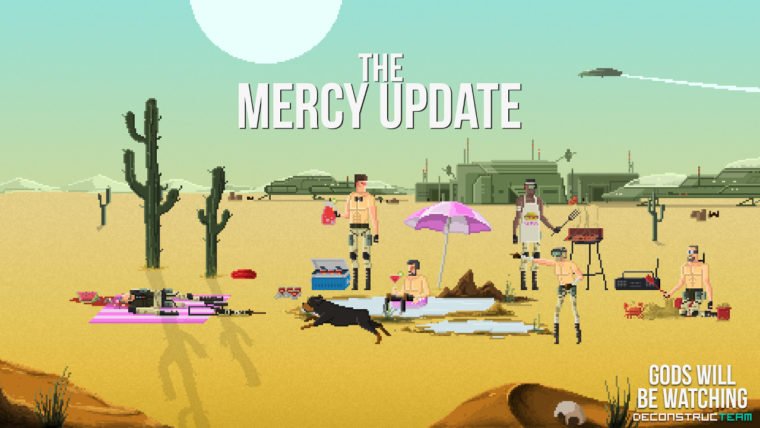 Gods Will Be Watching is a very difficult game. When I say that you probably think that it’s tough like Dark Souls or Ninja Gaiden, but you would be wrong. If you take a look at our review you will see that the main source of frustration with Gods Will Be Watching is the random nature of the difficulty, even going so far as to make you play actual Russian Roulette at one point. Well that is about to change with the latest update appropriately titled “The Mercy Update“.

The new update adds three extra difficulty levels on top of the original two, which were “Original” and “Easy”. Playing the game on Original was an almost impossible endeavor, and Easy only made it a bit less frustrating. The new modes are “Puzzle Mode”, “Puzzle Mode Light”, and “Narrative Mode”. Each of these fixes a different aspect of player’s original frustrations with the game, so let’s see what has changed.

Puzzle Mode keeps the game as it originally was, except that it removes the random factors from the game. So, for example, the Russian Roulette scene is likely removed, or altered so that it isn’t such a random event. This should help alleviate the problem of getting 20-30 minutes into a chapter only to have a random roll of the dice knock you all the way back to the beginning.

Puzzle Mode Light is similar to Puzzle Mode, in that it removes the random chance elements, but it also makes the puzzles easier as well. This is about as easy as the game is going to get without totally removing the challenge and the opportunity for failure.

That would be what Narrative Mode is for. This is the easiest mode in Gods Will Be Watching, taking away almost all challenge. This is for players who simply wish to experience the story without worrying about dying, or having to replay sections of the game.

While I appreciate what Deconstructeam was originally trying to do with Gods Will Be Watching this feels like a great change to the game. They wanted it to be a challenge, but they took it too far with the random moments that set you back by large chunks of gameplay. Now players will be able to remove those elements if they choose, which should help with some of the negative flack they have been getting since release.

The Mercy Update for Gods Will Be Watching also had a couple of bug fixes, which can be seen below: