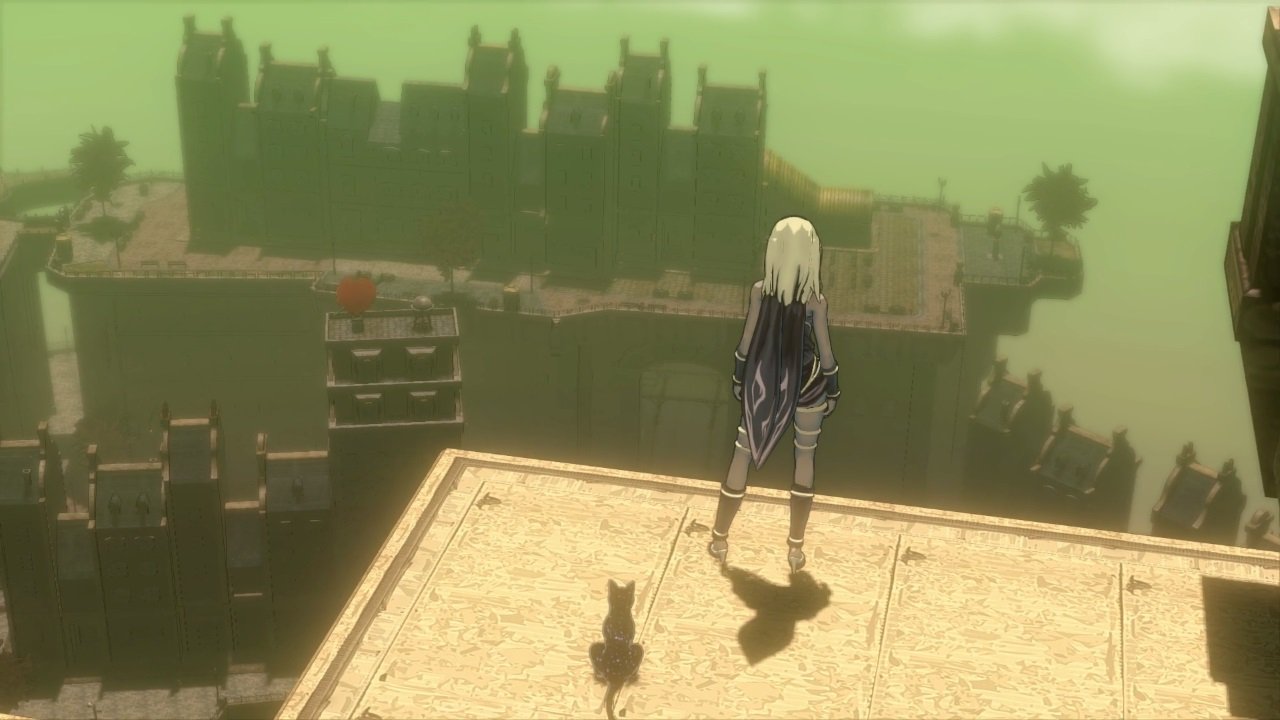 The PlayStation Vita has not met with widespread sales success, but that hasn’t stopped it from becoming home to a lot of very good, and mostly quite unique games. One of these early exclusives was Gravity Rush, an action-platformer that released back in 2012. However, being on just the Vita left its audience far too small for the game to gain the attention it deserved, so now it has been remastered for the PS4. Does taking the handheld experience and popping it onto the console make for an even more enjoyable game, or does it highlight flaws that might have been overlooked the first time around. The answer, as it so often does, lies somewhere in between.

You play as Kat, a girl who awakes one day with no memory of who or where she is. All that she knows is that she has a very strange looking cat that follows her, and that she can manipulate gravity somehow. This simple premise sets up the adventure to follow, with Kat discovering that the world she inhabits, the floating city of Hekseville, is in danger and it’s up to her to save it. Evil creatures called Nevi are invading and a giant gravity storm is threatening to tear the very world apart.

Gravity Rush Remastered tells a very video game story in a very video game setting. The usual tropes all seem to make an appearance, with the random, amnesiac hero being the chosen one to save the day. Still, the world is quite interesting, though the story largely doesn’t deliver on its initial promise. Hekseville is beautiful to look at, and a delight to explore. The architecture is fascinating, and really worth stopping to appreciate every once in a while. 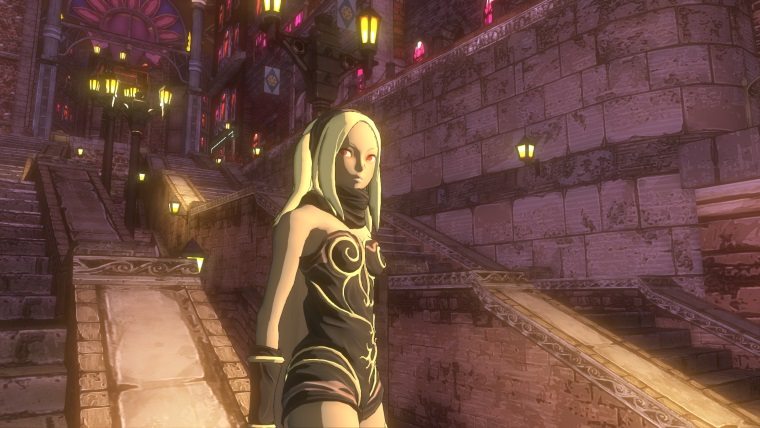 Making it all the more impressive is the work done by developer Bluepoint on this remastered edition of Gravity Rush. The original game looked and ran great on the PS Vita, but the extra power of the PS4 has truly been taken advantage of here. The game hits a solid 1080p, 60fps throughout with no hint of struggling. The great visual design, featuring a very cool cel-shaded art style, really shines in the higher resolution, and on bigger screens. If compared to native PS4 games Gravity Rush Remastered might not live up, especially when looking at character models, but taken on its own merits it is a joy to look at.

But the key to Gravity Rush Remastered becoming a bit of a cult hit was its gameplay. The aforementioned ability for Kat to alter gravity is the central element that makes the game stand out. Simply pressing a button causes Kat to hover above the ground, you can then move your cursor via the analog stick or motion controls, select a new target and press the button again. This then shifts the gravity so that that location is the central focus, with Kat plummeting toward it and standing on it as though it were the ground.

This simple mechanic is fascinating in how it changes the experience. Flying around, shifting gravity to your whim is surprisingly fun and engaging. Figuring out which surfaces to target takes a bit of getting used to, and the ever changing perspective can be disorienting, but once you get the hang of it, the game flows amazingly well. This core concept is the sort of thing that is fun just by itself, as players will find themselves zipping around the map and clinging to ceilings just to try it out.

Unfortunately, while the gravity shifting mechanic is great fun, the game itself never quite takes advantage of it like it should. The central story line will send you from one mission to the other via a cumbersome map screen. Once you take the missions on you’ll find them all essentially feeling like the same thing. You’ll move from one location to another, using your gravity shifting ability throughout, then you’ll fight some enemies, and then repeat this process a few times before possibly facing a boss. 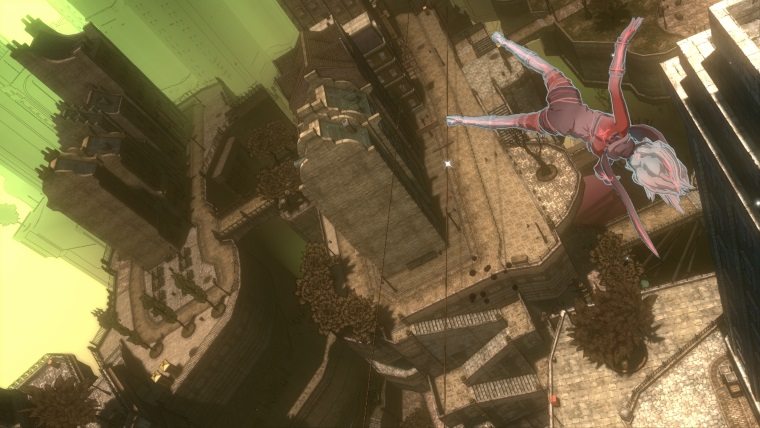 The best part of this is the movement between locations, as you can explore the city a bit and use your ability to pull off some cool moves. Combat however is a boring affair that feels far too clunky to have been such an important part of the game. If you’re on the ground Kat can unleash a flurry of kicks at her Nevi opponents, smacking their big, glowing weak spot a few times to take them out. This has no lock-on, so you’ll often find yourself just kicking the air, hoping that a few will land.

Gravity Rush has the concept down pat, but it never does anything truly marvelous with it.

Much easier and more effective is the Gravity Kick, where you hover in the air, target an enemy, and charge them with a single, devastating kick. This has a bit of a lock-on to it, but it’s a coin flip as to whether or not it actually hits. The enemies’ weak spots are fairly small, and if they move it can become inaccessible on your current trajectory. This probably should cause you to hit the enemy with no real damage, letting you reset for another attack. Instead you end up just sailing past them into space, which is admittedly a small inconvenience, but becomes frustrating the more it happens.

Making things worse is the fact that your gravity ability isn’t endless, so you always need to keep an eye on the gauge. If you run out just as you sail past an enemy you can easily fall hundreds of feet before the gauge recharges, which does nothing but delay the action and frustrate the player. Then there’s the camera, which is a bit of a mess to deal with. It isn’t completely terrible, but for a third-person action game it is surprisingly unresponsive, and does little to keep the action in the frame. Once you take on larger enemies, with multiple weak points that you have to take out, these things all combine to form a very frustrating experience.

This would be easily passable though if the mission structure were interesting. In my mind I kept thinking about Portal in relation to Gravity Rush Remastered. That game took a seemingly simple concept, that of linked portals, and expanded on it, building a fascinating game and universe that we’re still talking about today. Gravity Rush on the other hand has the concept down pat, but it never does anything truly marvelous with it. 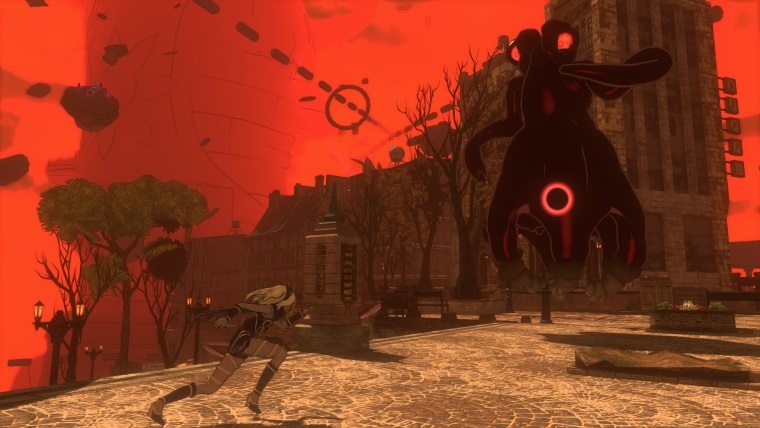 Soaring through the air, shifting gravity to my whim was entertaining to be sure, but there needed to be something more to it to take the game to that next level. Some piece of interesting mission design, or puzzles that take advantage of the mechanic. Instead it’s just used as a less capable flying ability, which is still fun, but not what it could ultimately have been.

There is certainly more to the game: you can spend time exploring the city and collecting gems that are used to upgrade Kat’s abilities. You can take on side missions which usually boil down to timed challenges of one kind or another. And you can find optional upgrades that will build up your combat and exploration abilities. All of this definitely adds to the experience, but only if you really become enraptured with the game, which the boring mission structure actively dissuades you from doing.

Gravity Rush was a good game when it released on the Vita back in 2012. Gravity Rush Remastered is a decidedly better experience, featuring improved visuals and a few new pieces for players to enjoy. However, the few years in between combine with transitioning onto the more competitive PS4 environment to make the original game’s flaws much more apparent this time around. Exploring via your gravity shift ability is still great fun, and the visual design is quite beautiful to look at, but dull missions and frustrating combat drag the whole thing down quite a bit. It’s still an experience worth checking out for the gravity shifting alone, but Gravity Rush Remastered feels like it could have been so much more.