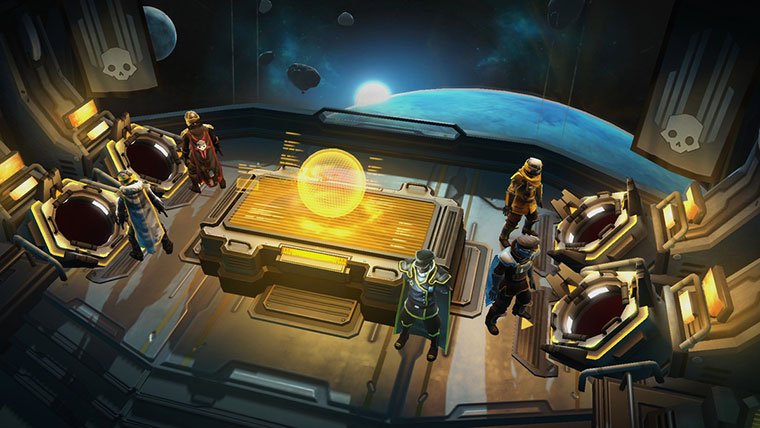 Helldivers is an isometric, multiplayer-focused twin stick shooter from the creators of Magicka, where players assume the role of freedom fighters whose job is to spread “managed democracy” across the galaxy and defend “Super Earth” from a multi-pronged alien assault. Yeah, it’s a mouthful, but underneath it all Arrowhead Game Studios carries over of the core cooperative gameplay and impressive presentation facets from their fantasy series, while adding a deep progression, customization, and over-arching online galactic war to sew it all together into something unexpectedly special.

Topical and self-aware, Helldivers doesn’t take itself all that seriously. Set in the year 2084, the countries of Earth as we know it are united as one to form “Super Earth.” Super Earth doesn’t take crap from anyone in its quest to “spread democracy,” apparently — Especially not from any freedom infringing aliens that could threaten their way of life. Helldivers is a game about shooting these three different breeds of aliens at its core, but Arrowhead’s tongue in cheek delivery touches on subjects like Imperialism and Exceptionalism in a non-threatening way. Your job as a Helldiver is to liberate increasingly hostile planets with procedurally generated landscapes and eliminate the aliens that get in your way. It’s not a bad set-up for gallivanting across the galaxy.

Liberating said planets requires a team of Helldivers to drop in and complete objectives in a mission. Complete all the missions on a planet and it becomes liberated. Continue to successfully complete missions and liberate planets, and you’ll get incrementally more difficult missions to tackle and planets to explore. To do this you’ll need to put your boots on the ground, but Arrowhead isn’t necessarily reinventing the twin stick shooter with Helldivers. It controls precisely as you would expect it to. Left stick to move, right stick aim, trigger to shoot, with a number of special weapons, power-ups, grenades, and alt-weapons to wrangle with. What really sets it apart though is the management aspect and required strategy of it all. Helldivers simply isn’t kill all bad guys in changing environments. Managing power-ups on cool down timers, ammo supply, and plotting best routes to take to your objectives are paramount to aiming and killing. Objectives range from destroying alien structures, to activating terminals or equipment, escort missions, or one of many others depending on which faction you are fighting. Though the thread is that you’ll be doing this during a constant onslaught from the natives. Careful use of “Stratagems” is critical to success. These items are essentially power-ups that you equip before a mission and range from heavy weapons and vehicles, to airstrikes and automated turrets. The gameplay wrinkle is that it takes some skill to use these items. Not only are you managing the cool down timer for said Stratagem, but you also need to input a code on the d-pad, which then brings up a beacon that you must throw to where you want the items to land. In the midst of the intense battles of Helldivers it can be hard to input the commands correctly, but feels really rewarding when you do. Mastering the use of Stratagems will help, but it’s still incredibly easy to get overrun in Helldivers. It is a punishing twin stick shooter, that requires not only skill, but strategy. 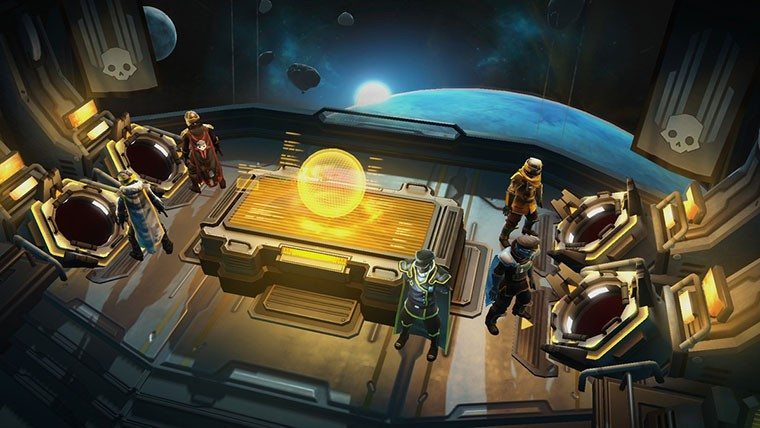 This necessary strategy is even more apparent when playing with others, and teaming up seems like the way this game was designed to be played. Up to four Helldivers can team-up for planet liberation in a drop-in drop-out fashion. Locally or online, the multiplayer of Helldivers requires that players constantly look out for one another. Whether that be calling in timely re-supplies, a clutch turret, or other defensive support mechanisms to help in securing an objective. Helldivers does ‘us versus them’ really well. Where some games that feature cooperative modes tend to get a little easier when you add players to the mix, Helldivers stays solidly difficult. Probably because the game never quite feels content with giving you or your team a break. Enemies seem smart enough to cut off routes to crucial supply drops. They call in reinforcements and attack with vengeance, punishing you for failing to reload quickly enough. They’ll relentlessly attack your downed teammate until your only option is using a more time consuming method of revival. Though it’s not just the enemies that will give you fits. Friendly fire is a killer in Helldivers, and it comes in many forms. Stray bullets, orbital drops, a mishandled grenade, there are many ways that you can fall by the hands of your teammates. The good ones will be there to pick you up though. Pushing through the adversity, completing objectives and making your way to your evacuation is rewarding each and every time. 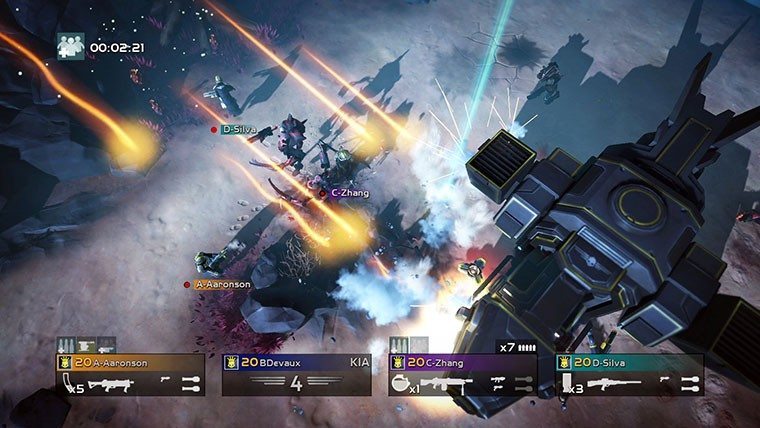 The mission-to-mission gameplay is solid, but there are a lot of hooks to keep you coming back to Helldivers making you play just one more mission. There’s a lengthy progression system that unlocks perks for your character. These characters are unique and can be customized with gear like helmets, armor, and capes. Each world contains “Samples” that ultimately allow you to upgrade weapons and equipment. Liberating planets will also unlock different abilities for your character. Helldivers is constantly rewarding you for your work in the field, and once aboard your orbiting ship you’ll be able to spend your currency and outfit your Helldiver in the manner that you most enjoy, or that is appropriate for a coming mission.

The four player cooperative play is impressive enough to stand on its own, and would likely keep many engaged. Especially, for those that play with friends regularly and like a challenge. What’s really impressive, or at least ambitious, about Helldivers is the Galactic Campaign, in which every player contributes in this overarching mission. For every planet that is liberated across the entire player-base, points are tallied for Super Earth and the corresponding faction is pushed back. Enemy AI will attempt to attack crucial planets looking to regain footing, and players must respond to these attacks. This tug-of-war style battle should play out over the course 4-6 weeks, where either the aliens overtake Super Earth or the Helldivers invade the home world of aliens in a timed community event. In theory, the Galactic Campaign sounds incredible. Rewarding players for participating in the events by giving them double XP should motivate them to help the cause and tweaking the difficulty post-launch in each successive campaign should keep it fresh, but it’s still going to take some serious community commitment to make it something special.

Right in the sweet spot between being fun and challenging, Helldivers is a superb cooperative experience that keeps you coming back for more.  Arrowhead layers on thoughtful progression and customization to keeps things interesting on a mission by mission basis, and while these features deserve praise on their own, how the community takes to the Galactic Campaign could turn a great, ambitious game into unparalleled cooperative nirvana.