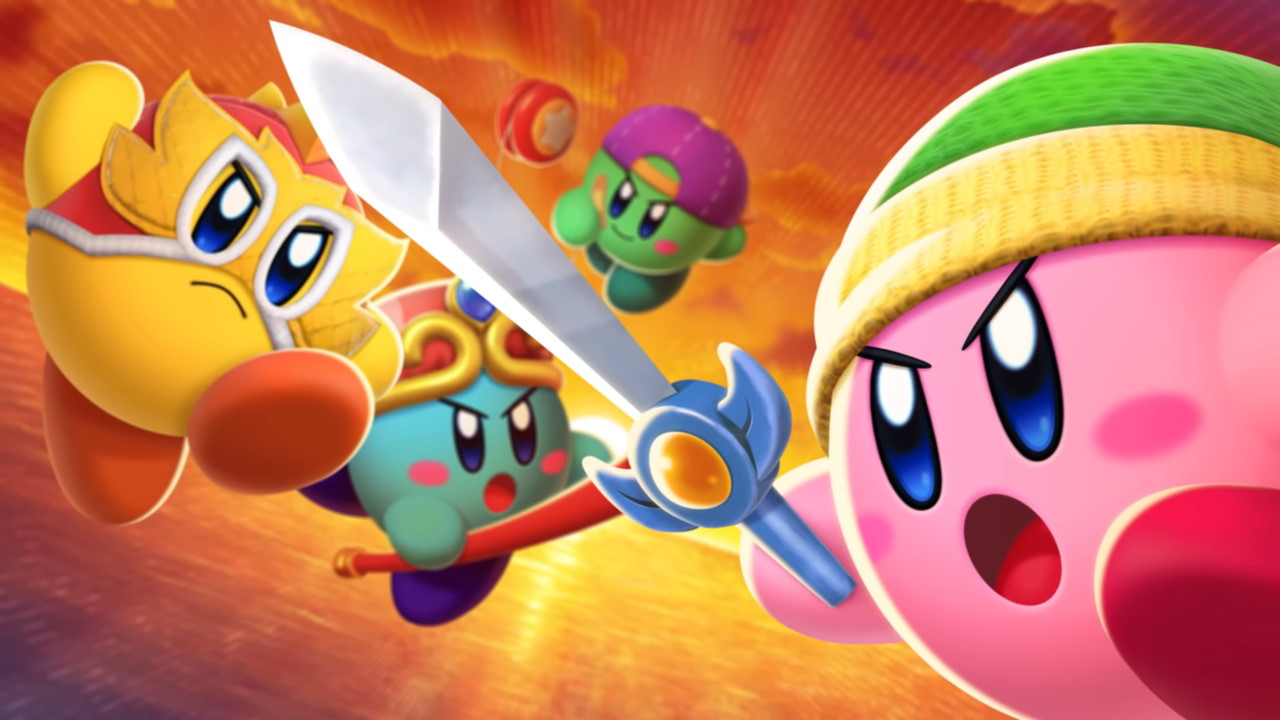 Nintendo has always been skilled at taking their characters and using them in many different ways across multiple video game genres. Mario is clearly the king of this, but in a close second place is Kirby. It feels like every year there’s a new Kirby game and you never know what form it might take. Will it be a standard platforming adventure or a pinball game? A puzzle game or a racing game? The little pink puffball has done them all and more. The latest spin off comes in the form of Kirby Fighters 2, a fighting game that serves as a full sequel to the original Kirby Fighter Deluxe. But does it stand out as a successful Kirby experiment or will it be forgotten like so many of his side adventures?

What is Kirby Fighters 2? Simple, it’s Super Smash Bros. Ultimate, only with less variety and slower gameplay. Remember how exciting the Smash Ultimate reveal was? “Everyone is here!” It exclaimed before showcasing a huge roster of playable fighters. Now imagine the same thing, but with all the fighters as Kirby and you’ve mostly gotten the gist of Kirby Fighters 2. Featuring 15 different varieties of the character to use, each does feature their own fighting style to master. Alongside them will either be player controlled fighters or AI buddies that select from their own Kirby-verse characters. Throw in a bunch of levels and it has all the makings of a party-fighter bash. 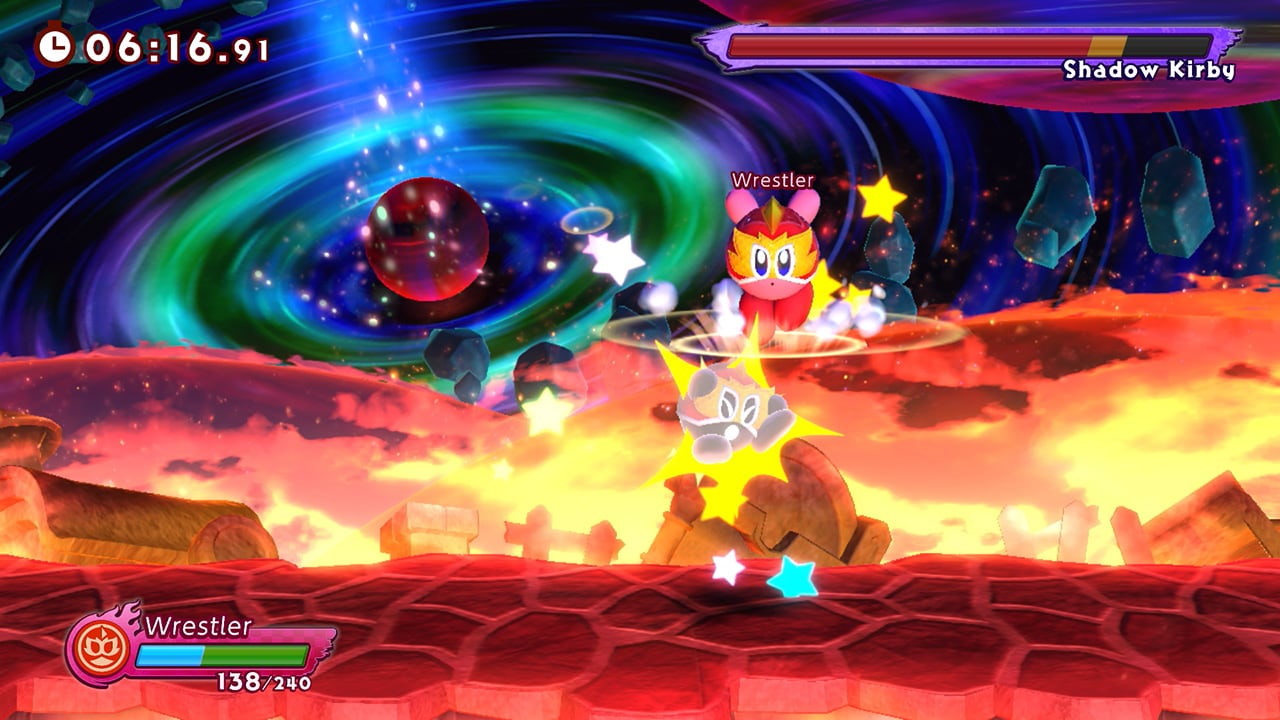 Unfortunately the gameplay that underpins this experience just isn’t worth exploring beyond surface level. Each Kirby character has a few basic attacks and some other moves like floating and expelling air at enemies. All of them feel cumbersome to control, which is surprising given the character’s speed and controllability in Smash. This isn’t Smash though, and while the genre might be similar that’s mostly where the comparisons end. Featuring poor AI enemies with low health and a desire to mostly wander stages rather than do battle, each fight just ends up a buttom-mash spree for the most part. Items mix it up but they’re mostly just adding chaos or speeding you to victory rather than offering true variety and strategy.

Most of these battles will take place either in online/local versus matches or in Kirby Fighters 2’s Story Mode, which really just boils down to a series of escalatingly difficult battles, rather than an actual adventure. Note that “escalatingly difficult” is a relative term. The game is so easy, especially in its opening stages that you might as well take those moments to grab a drink and let your buddy handle it. Hell, if it could advance through the menus you might be able to finish up some work, grab dinner, and return to a fully leveled character. It’s not that simple really, but just know that this game really feels like it’s targeting a younger audience.

The main multiplayer brawls are mostly split into 2v2 battles, such as online fights. If you are working together well and choose characters that compliment each other, you can pretty easily dominate the match. Fights like this will last just a couple of minutes and once the steamrolling begins the other team will mostly just give up. When you die there’s a seemingly interesting mechanic where you turn into a ghost and can still impact the fight, but given the chaos on screen this usually ends up being incosequential. 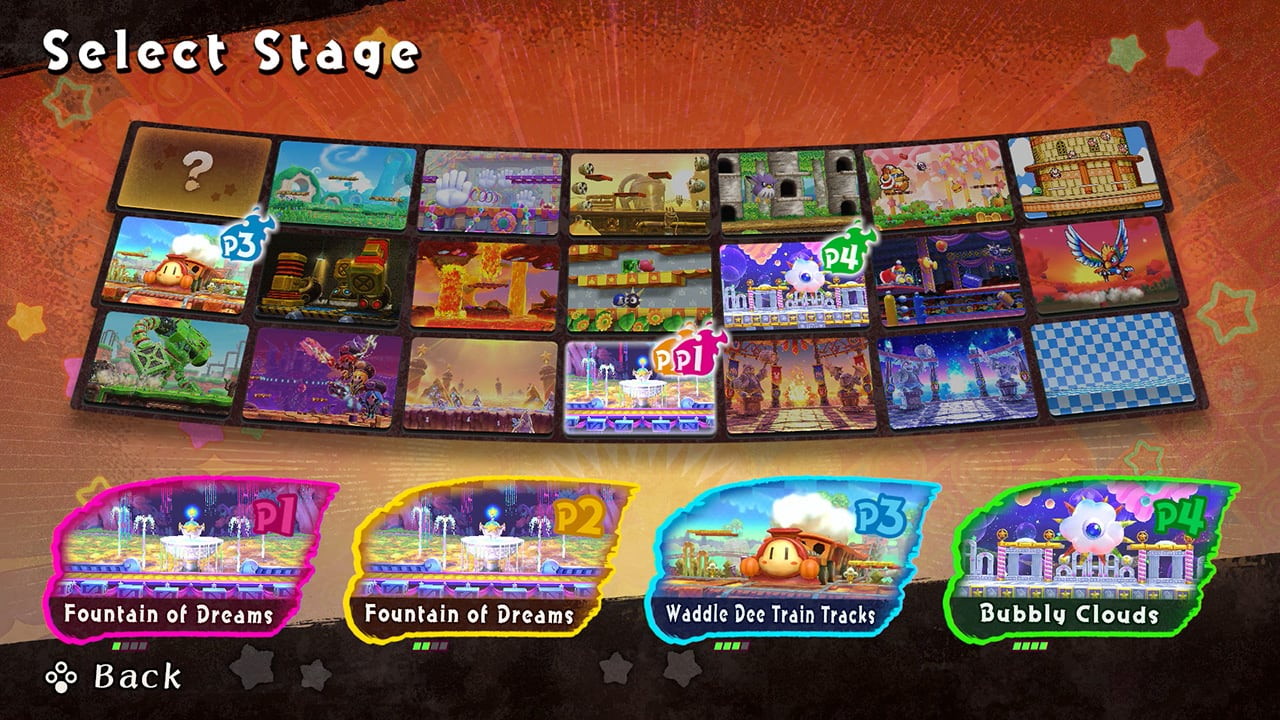 Everything about the game screams that it’s for players who find Smash Bros. too intimidating or complex. There’s buddy fighters to help you out, characters are limited in their attack abilities and movement speed. Enemies are mostly passive until you reach higher stages. Each level you climb in Story Mode gives you a choice between three buffs to your character, working like a roguelike of sorts. Not much changes as you progress though, with fights feeling similar most of the time until you encounter a boss or unique level. Stages feature some nice visuals and offer cool environments for longtime fans to duke it out in, but they’re mostly just flat surfaces with a few floating platforms and some hazards that cause extra chaos.

If the fighting felt good all of this would work, but it just doesn’t. Kirby is typically a light and fast character in his games, with many different methods of movement and attack. With Kirby Fighters 2 his movement is slow and dull and even if you have multiple attack options you’ll mostly just spam the most effective one until the enemy dies. Fans of the series or people looking for a simpler Smash-style fighting experience might be pleased, especially with the lower price point, but anyone seeking a robust fighter will be disappointed

Kirby Fighters 2 is very much Super Smash Bros. for kids and/or hardcore Kirby fans. It’s a similar experience just made worse by the simplistic and slow fighting and the limited variety of overall gameplay content. There’s tons to unlock and enjoy if the game does gel for you, and there are no major technical faults, even with online play (so far). Still, diving into Kirby Fighters 2 will mostly cause players to wonder why they don’t just boot up Smash Ultimate for a few rounds. Make everyone pick Kirby and it’s kind of the same thing but better.