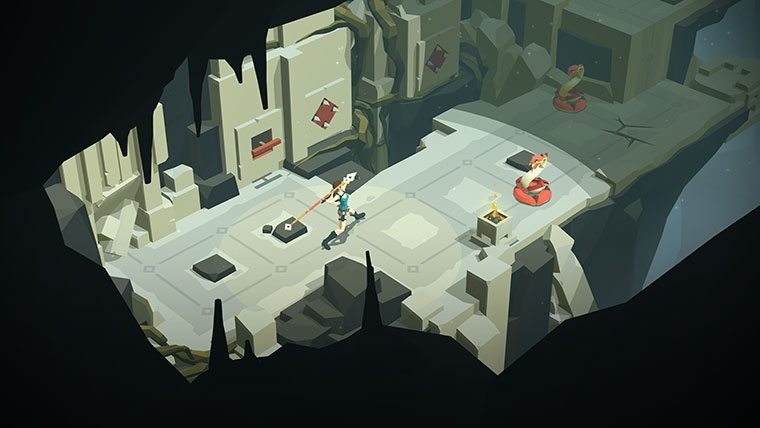 Traditional console and PC games haven’t translated very well to phones and tablets in the past.  Square Enix Montreal has recently started bucking that trend in a big way with their GO series.  Initially launching Hitman: GO for mobile devices in 2014 and now Lara Croft GO is ready to hit phones and tablets here very shortly.  So, what exactly did Square Enix get right with their mobile entries that so many publishers have failed to get?

For starters, instead of trying to cram in mechanics that don’t work on tablets and phones, they instead built unique, turn-based, puzzle solving games that are simple, challenging and fun to play. While Hitman: GO was met with understandable skepticism, the gameplay turned out to be pretty incredible.  It somehow stayed true to the long-running Hitman series while being an entirely different type of gameplay experience.  Well, they’ve done it again with Lara Croft: GO, by tweaking this grid-based puzzle-solver to stay true to Tomb Raider’s roots, giving you both the satisfaction of taking Lara Croft on yet another Tomb Raiding adventure, while making the experience perfect for short sessions on mobile devices.

Lara Croft GO isn’t a Hitman GO clone by any means.  A lot of the mechanics are similar, but the two games are quite different.  Lara Croft GO feels much more distinctly like a level-based Tomb Raider game with the exploration and puzzle-solving that the series is known for.  GO might actually lean on the older Tomb Raider games more so than it does on the newer entries in the series.  That means there’s a much more acute focus on the puzzle solving and actual tomb raiding, finding treasures, dealing with monsters, and the other facets of the old games that made them beloved.

Lara Croft GO is turn-based though, like Hitman GO.  Lara navigates the map, moving from spot to spot, while the world moves with her on every turn.  You still need to make it from the starting point to the end point, but the puzzles are a different breed than the ones found in Hitman.  Lara will need to dodge massive boulders like Indiana Jones, she’ll need to find ways to out-maneuver giant lizards, snakes, spiders, and more.  She’ll move platforms to change the landscape to her advantage, she’ll avoid cracked surfaces and environmental traps.  Lara can die in many ways.  If the puzzles of the game outsmart you, or the enemies are given the chance to attack you, you die, and simply must start the level over again. 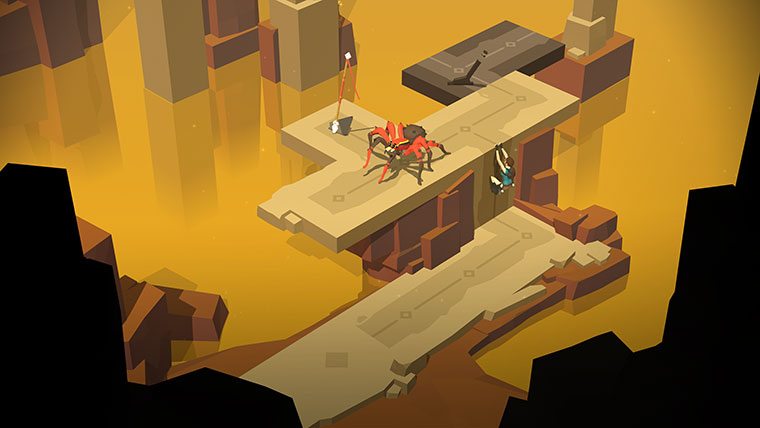 While getting from A to B is the main focus of the game, there’s also quite a few treasures hidden in the world.  In a Where’s Waldo style hunt for jewels and artifacts, you as the player must simply tap on them when you see them, but they’re hidden quite well in many cases. Each level has a certain number of gems or pieces of an ancient artifact to uncover, miss just one and you’ll lose the opportunity to be rewarded for your hunting and pecking acumen.

Lara starts out the game in a classic Tomb Raider outfit, but if you collect all the jewels or artifacts in a given level you’ll be granted with new costumes to put on her.  It sounds pretty easy, but you’ll need to be eagle-eyed for the entire time you are on a specific level if you want to collect all the hidden items.  It can be a little disheartening to make your way through an area only to have to go back and do it all again if you missed, say, a single jewel or piece of an artifact.  Then again, it does add some replay value to the levels as a whole. 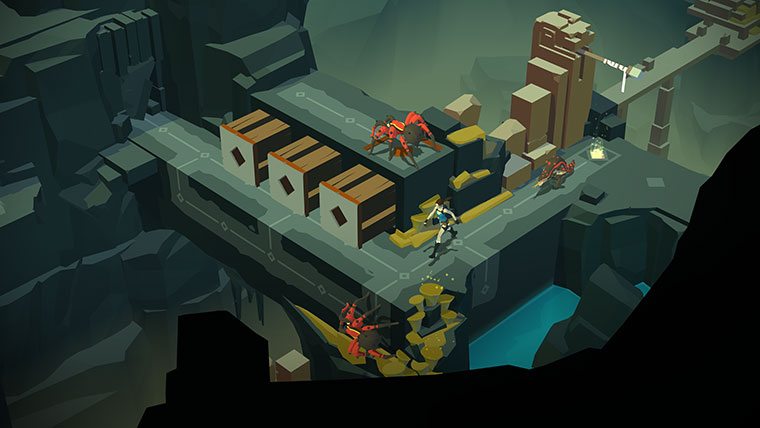 Like Hitman: GO, Lara Croft GO uses a minimalist art style to get the job done, and once it works exceptionally well.  There’s actually quite a lot more going on in LC: GO than in Agent 47’s game.  With all the different enemy types, weapons to use, and environmental puzzles to navigate.  Square Enix Montreal also uses the foreground of your mobile devices to add a sense of depth to the experience, where it feels like you are peeking in on this adventure from a perch high above the action.

Square Enix Montreal is on a roll with their GO series of mobile titles,  and Lara Croft: GO is another exceptional entry into this growing series.  They nail all of the elements that make for an enticing mobile title:  Fun in small chunks, visually appealing, and thought-provoking, Lara Croft GO can provide hours of enjoyment for a small entry fee.