The latest news in the world of video games at Attack of the Fanboy
August 11th, 2017 by Mark McLean 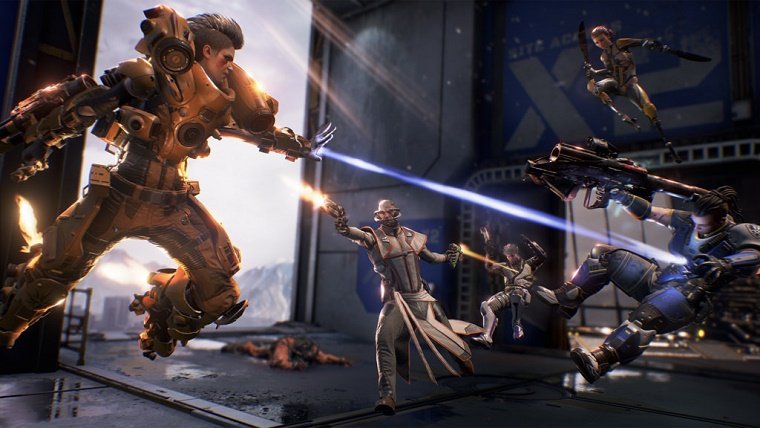 LawBreakers is the latest twist in the hero shooter genre, which adds zero-gravity movement and elements from classic arena shooters like Quake and Unreal Tournament to the popular format pioneered by Team Fortress and supercharged in last year’s Overwatch. Lawbreakers is in some ways a response to Overwatch, and it addresses some of the character selection/meta game arguments in Blizzard’s game, but also has its own personality and rhythm, if you can dig deep enough beyond some presentation and design choices that, at best, can make the game seem blander than it actually is and at worst are a barrier to entry for a game that by its nature must live or die on an active, regular player base.

Nine distinct and well balanced classes each have a range of unique weapons and abilities, tweaked to fit a number of different play styles and ability levels. Story is thin on the ground but ultimately inconsequential as players are split into two teams of five – Law versus Breakers. The five game modes are all objective based, two involve holding points on the map and two are variations of capture the flag. The fifth mode is called Blitzball and is a fast moving game closer to a sport than a shooter mode. All of the game modes are notably about more than just shooting the opponent, and a well organised team will always win out against lone wolves hunting for killstreaks. 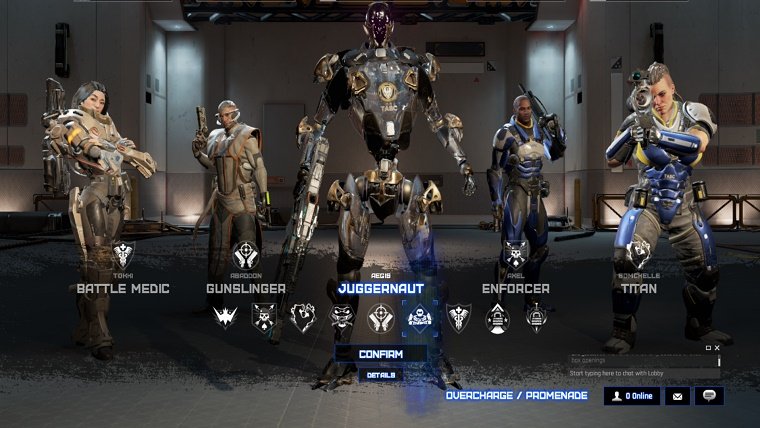 LawBreakers is an online multiplayer only game, and even then is a very bare-bones experience with minimal presentation and supporting features. On loading up the game, no information is given about the game at all.  To be missing a tutorial in a game that needs you to understand specific mechanics and abilities is one thing, but no introduction of the characters – by opening cinematic or descriptions (there is a screen that shows a name and portrait of each of the 18 characters, but this is used to equip various cosmetics and skins) – is unforgivable. It seemed that the only real option would be to jump into a game. I jumped into a match, chose a character that looked like he could take a bit of damage, as I had no idea who any of them were or what their abilities were. I then struggled through a miserable ten minutes of trying to work out how to control my weapons and what was supposed to be happening in the game. This is the point where I can see many people just switching off and dismissing LawBreakers as confusing or boring.

After a brief detour to the game’s website to find out about how to play the thing and get some idea of what was going on (there is a basic written description of the abilities available in game – i.e. while enemy players are shooting at you), I jumped back in with the knowledge that each character has a main weapon and secondary weapon, sometimes with alternate fire modes, a movement based ability like sprint, slide or jet boots/pack that used an energy bar, a thrown or grenade type ability on a short cooldown, and an ultimate ability on a longer cooldown. Weapons all shoot from the hip (no iron sights or zoom-in scopes) and health does not regenerate. You can even blind fire behind you to control your trajectory in zero-g or try to hit a pursuing enemy.

As much as LawBreakers would like to be seen as a hardcore, high skill level game, I actually found the gameplay to be quite accessible. I’m average at competitive shooters on a good day, and often much worse, but I found most of the classes in Lawbreakers to be playable and enjoyable. While I may never get my head around playing as the fast-moving squishy Wraith, Gunslinger or Assassin, I found the tanky Juggernaut with his shotgun and shield wall was a good choice to help my team defend hard points in a game of Occupy. The Titan is another chunky character, armed with a Rocket Launcher and a chain-electric gun. The Vanguard offers more mobility with her jet pack and minigun, which gets more accurate the longer it is fired, so is a good choice if your aim is not the most precise. To make up for this, the Vanguard’s ultimate ability is a bit obvious and easy for opponents to avoid.

All the classes have small surprises and a several viable tactics – the Enforcer is probably the most like a traditional FPS loadout with his assault rifle, but his abilities are more support based. His grenade works like an EMP blast for the opposing team’s abilities, and his sprint also boosts teammates’ speed and rate of fire. The Harrier is a great class with jet boots and laser rifle, who can quickly move around the map to cover gaps and can carry a blitzball most of the way to the goal seconds after kick off. Healers are going to love the Battle Medic, the grenade launcher really packs a punch and makes him/her a viable choice in defense or attack. Classes are changeable on death, but you’re unlikely to have your teammates dictate or criticize your pick, as unlike other similar shooters all picks are fairly viable in most situations, so you can play your preferred role or style without worrying that it is detrimental to the team effort. 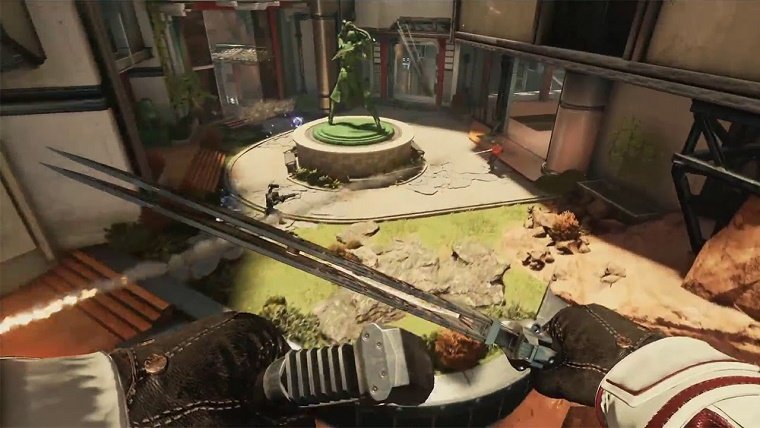 The eight maps are just about enough, and are quite small with obvious choke points and kill boxes, but with the zero-g areas providing enough novelty to keep things interesting for now. Developer Boss Key have stated that all future maps, characters and modes will be free. This being an online multiplayer shooter in 2017, loot boxes rear their ugly, unnecessary head with skins for characters, weapons and other cosmetic decals, and are awarded each time you level up. Aside from the loot boxes, there are no other upgrades or progression systems – everyone is on a level playing field no matter how long they have been playing the game.

Despite some very minor technical hiccups in the first days after launch, the game runs smoothly and at the time of writing matchmaking time is rarely longer than a minute. The matchmaking system itself seems a little basic, as is the case with many of the supporting features of this release. There is a purity to this lack of distractions to the main game, and whilst none of the presentation looks cheap, many will expect more than the functional feature set on offer.

Beneath a brash exterior of dated ‘attitude’ and unwelcoming presentation lies a finely tuned jet engine of a shooter, that has the technical chops to distinguish itself in a crowded and fickle genre. LawBreakers is a game that struggles to put its best foot forward, but is well worth the effort. If it can get enough people to have hands-on time with the game, it will go a long way to finding the audience it deserves.