The last generation of gaming was filled with an abundance of HD collections for many different series, and gaming publishers have taken that to a new level with the number of remasters so far in the current generation. Typically, remasters or remakes are done for games that were big sellers or at least darlings of the industry. However, Nordic Games has revived a very obscure 3D action platformer from PlayStation 2 with Legend of Kay Anniversary, which feels reminiscent of some top games in the genre, while also adding its own personal touch.

Legend of Kay Anniversary truly is a trip back to the era of gaming where action platformers were still prevalent, which is likely why this title managed to be overlooked, and at best was a cult classic upon its release back in 2005. The game has already had one re-release on DS five years ago, but Legend of Kay Anniversary is a true remaster that has now brought the game to the HD generation for the first time.

The story of a young warrior who sets out on a journey to take down those who oppress his village is quite common in the realm of martial arts movies, but Legend of Kay manages to tell a similar story without feeling like a total rehash. For many years, the villages of cats, rabbits, frogs, and pandas lived in peace, before being invaded by the rats and gorillas that now rule with an iron fist. Feeling almost like a mix of Avatar: The Last Airbender and Kung-Fu Panda, which both actually came later, Legend of Kay manages to feel distinct from others in the gaming genre by offering an interesting story that focuses around the young cat Kay.

Legend of Kay Anniversary also utilizes comic book style cutscenes to help tell parts of the story, which is a nice change of pace from the stylings that are found otherwise. On the downside, these include the cringeworthy voice acting that are found all throughout the game as well. While Legend of Kay itself actually has a pretty solid story and can be enjoyed by adults and kids alike, the voice acting is incredibly poor, which is made worse by terrible dialogue that is chock full of puns and martial arts tropes. These are able to be skipped, but it is disappointing to have to miss parts of the story because of this. 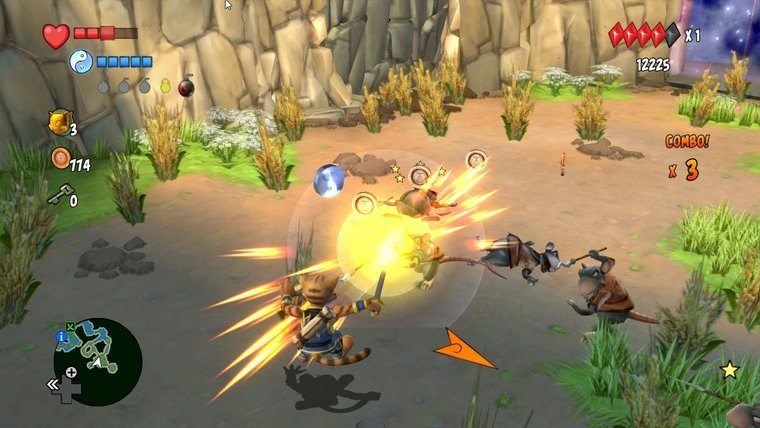 The one 3D action platformer that managed to stand out from the rest during the PS2 was that of Okami, which came out a year after Legend of Kay. While the two are done by completely different developers, the environments found within Legend of Kay feel very Okami-esque. Throughout the game, you will journey to various locations including forests, a swamp, and even a volcano. Each area is very well designed, though some of the locations within each do start to feel all too similar. This is why it is good to see them switch it up with varying locations, though it does take awhile for that to happen.

The game is made up of different levels, which takes away the open world elements mostly. One would think that navigating would be really easy as a result, but instead the in-game map is all too confusing. It stays on the bottom left of your screen and while it can be zoomed in or out once, there is no way to view it full screen. In addition, it rotates with your movement, making it all the more annoying when trying to complete the numerous quests in the game.

The original release of Legend of Kay on PS2 looked good for the time, but certainly has not aged well with blurry landscapes and blocky textures that were to be expected in games back then. Bringing the game to the current generation however has allowed the developer to give Legend of Kay a visual facelift. The addition of high-resolution textures and upgraded character models look vastly improved, especially in action, but it is still far from a graphical powerhouse.

One of the complaints about the original Legend of Kay was the all too common frame rate issue. While Legend of Kay Anniversary doesn’t always run perfectly, there is a massive improvement over the original. Battles with enemies filling the screen run smoothly and allow you to focus on honing your skills rather than having to also combat the faults of the game itself. This is a critical element of any platformer and it is great to see a focus on making this much impressed in the remaster.

While Legend of Kay Anniversary does run much better than before, it is not without its glitches. There was even one game breaking glitch during my playthrough, where a cave that is used as a transition spot to another area messed up and would not allow passage. While it would normally go to a loading screen at this point, it instead would just put me inside a black cave that eventually removed all textures and went mostly white. Luckily, a quick restart to the most recent checkpoint solved this, with the few other glitches being much simpler and far from game breaking. 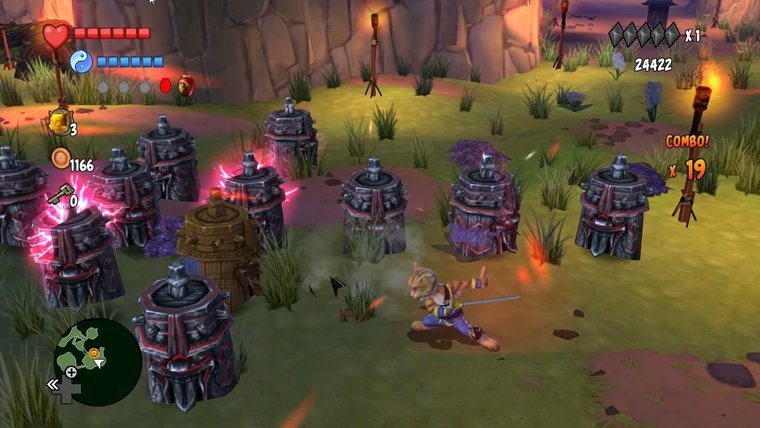 Taking cues from series like The Legend of Zelda, Legend of Kay starts off with rather simplistic gameplay and then builds upon it from there. At the start, you will only have a sword to use, but soon magic attacks will be added in, along with other weapons like claws and a hammer. Each of these also have upgraded versions that can be obtained through either the main story or side quests. The combo system is fairly basic, but feels like much more than the typical hack ‘n’ slash game that this could have easily been without the love and care that the developers put into it.

The controls can feel kind of awkward at times, particularly with the button placement. The uppercut is one of the first moves you learn in the entire game, but it is one that is best to avoid in combat due to the uncomfortable button input. To use it, one must hold down circle and then hit square to attack, which can be quite hard to pull off with the usual way that gamers hold a controller. Circle allows you to crouch, but it must be held down, when instead it could have been so much better if it was a toggle, rather than only temporary. The camera can sometimes also cause some issues, but the ability to move it yourself prevents it from becoming a major problem.

Certainly one of the more unexpected remasters

Beyond feeling like The Legend of Zelda combat wise, Legend of Kay also utilizes a very similar item system. Heart Containers can be earned or purchased throughout the game, which is very helpful as the game gets more difficult later. The game also adds in something unique to the equation with armor. Just like the Heart Containers, armor can both be purchased and found through completing side quests, with options between Green, Red, and Black. These will become vital as the difficulty increases, adding a level of strategy by allowing you to take much less damage against the hordes of enemies, or even bosses.

One method of obtaining armor is through the varying side quests, which can also provide you with plenty of other items. One of the most common side quests tasks players with finding a certain number of cat statues in a specific area, with one of the best rewards coming early with the brand new Dragon Sword. Like most games, these are completely optional side quests, but luckily Legend of Kay actually provides you with worthwhile rewards, which helps to extend the length of the game by quite a bit. 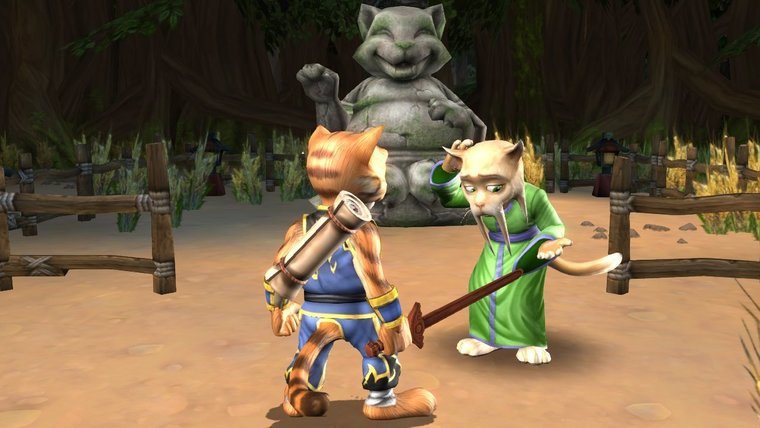 Legend of Kay, like most games in this genre, is the type of game that is first and foremost aimed at younger audiences. There is plenty of fun to be had here for an older audience that miss this style game, but the overly cheesy dialogue and mostly simplistic gameplay is definitely something that will be most enjoyed by children. That is why the use of bad language, albeit sparingly, is all the more strange in the game. While it is never anything extreme, the inclusion of “bastards” just didn’t seem to fit the style of the game at all.

Legend of Kay Anniversary is certainly one of the more unexpected remasters, but there is no doubt that it deserved it. Overlooked during the PS2 era, this game offers the style of 3D action platforming that is missing in modern gaming. With fast paced combat and the right amount of difficulty, it will keep you on your toes throughout. While held back by terrible voice acting and only average visuals, Legend of Kay Anniversary managed to bring back an underrated wonder for an entirely new generation of gamers, one which few ever expected to see again.