Lovers in a Dangerous Spacetime Review 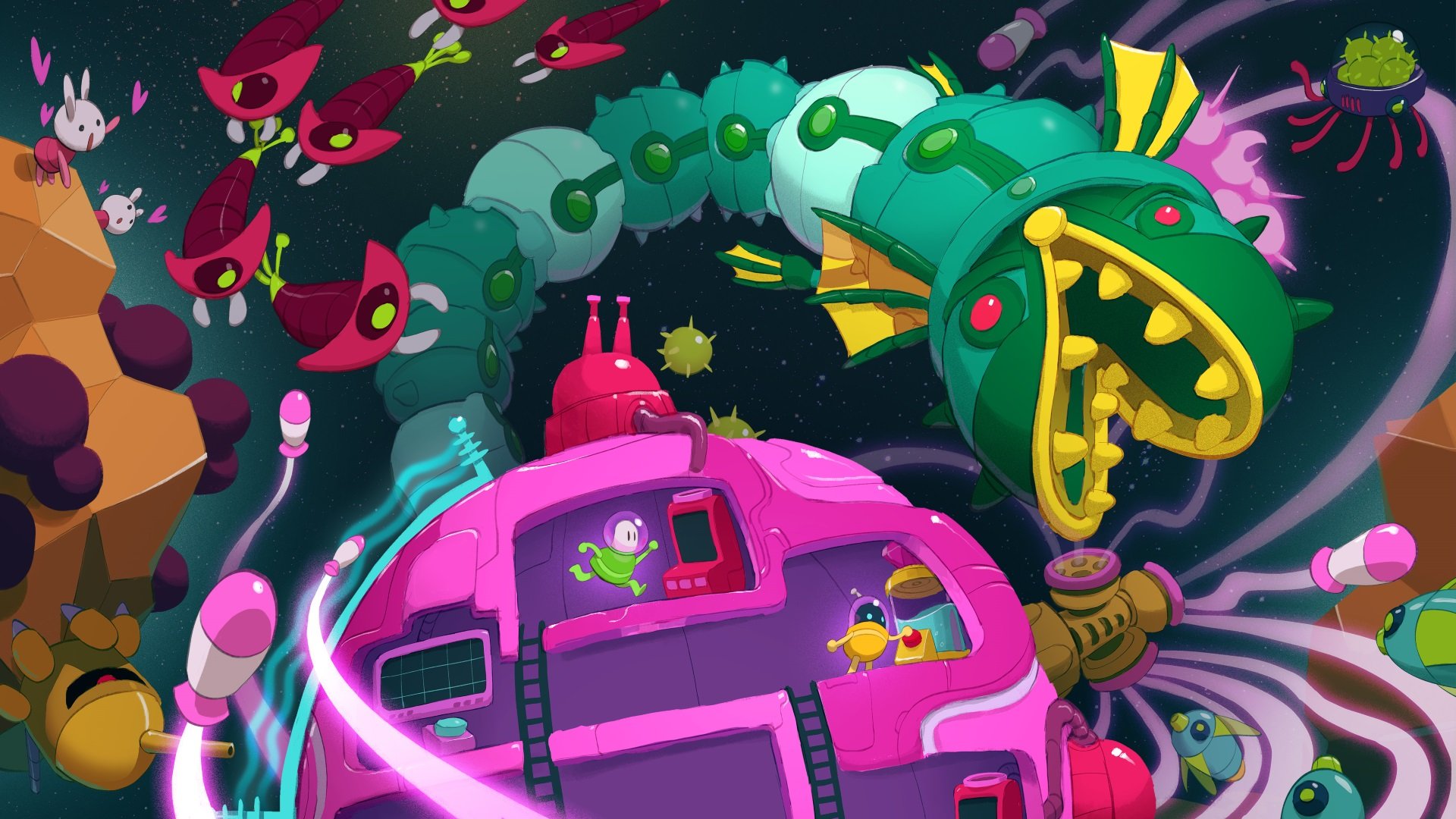 There isn’t any one game quite like Lovers in a Dangerous Spacetime. While it pulls inspiration from many other titles, and is based on many aspects of the hugely popular rogue-lite genre, as a whole the game presents something quite new and unique. Gorgeous visuals, tons of unlockables, and upgrades form the base of the experience, but Lovers in a Dangerous Spacetime is a co-op title through and through, offering those with a friend the chance to explore the fascinating universe that developer Asteroid Base has crafted. The only real problem is, if you don’t have that buddy to join your game, the experience isn’t nearly as enjoyable.

Lovers in a Dangerous Spacetime doesn’t have much of a story, at least not one that is totally comprehensible. You’re a good guy, bad guys are pouring into the galaxy to do bad stuff, and you escape in a spaceship at the last second before they start taking things over. You’ll use that ship to fight them back out of the galaxy to restore order once more. The story is pretty bare-bones, seemingly on purpose. The narrative simply exists to get you moving forward into the gameplay part of Lovers in a Dangerous Spacetime. Once the opening cinematic is over and you escape in your ship things remain pretty straight-forward from then on. 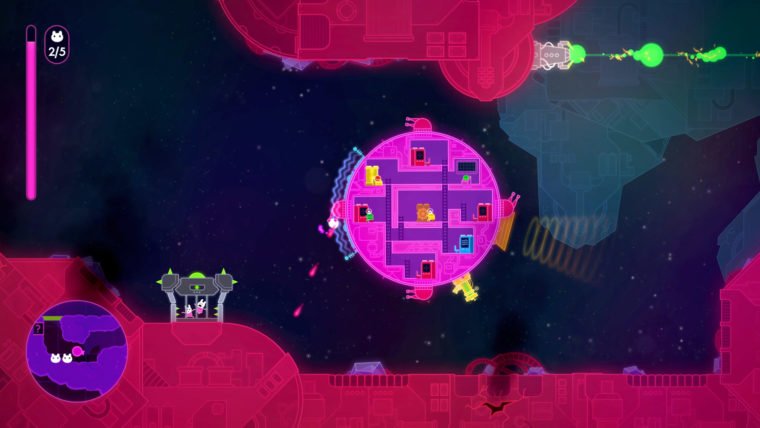 That gameplay certainly sets Lovers in a Dangerous Spacetime apart from other games. The game places you and a friend in charge of a single ship. There are multiple stations throughout the ship, four turrets, a super-weapon, a shield, and navigation. You will have to work together to get where you want to go, and do what you want to do.

Lovers in a Dangerous Spacetime is a 2D game, so this isn’t some over-complicated spacesim. Instead you glide around on the 2D landscape, avoiding obstacles, fighting enemies, and saving prisoners from the clutches of evil. Each stage is procedurally generated, offering a fresh experience each time you start one up. The main task is to find at least five, but possibly more prisoners. Once you do this you can hit the exit and move on to the next stage.

Along the way you’ll fight a menagerie of enemies, all with different weapons, movement, and overall strategy. You and your friend will have to work together, deciding which stations to man, and which to leave open. For example, one person could take the shield, deflecting any incoming shots, while the other mans the front turret, firing on anything within his range. This range is limited though, so anything on the top, bottom, or behind the ship will have to wait until one of the players can grab those turrets.

It’s this co-op mechanic that makes Lovers in a Dangerous Spacetime so unique, giving couch co-op fans a new game to adore. Figuring out and deploying an effective strategy for all the things Lovers in a Dangerous Spacetime will throw at the players will have them yelling, screaming, and laughing the throughout. When it works, it works well, but it still requires two people to work the way it was intended. 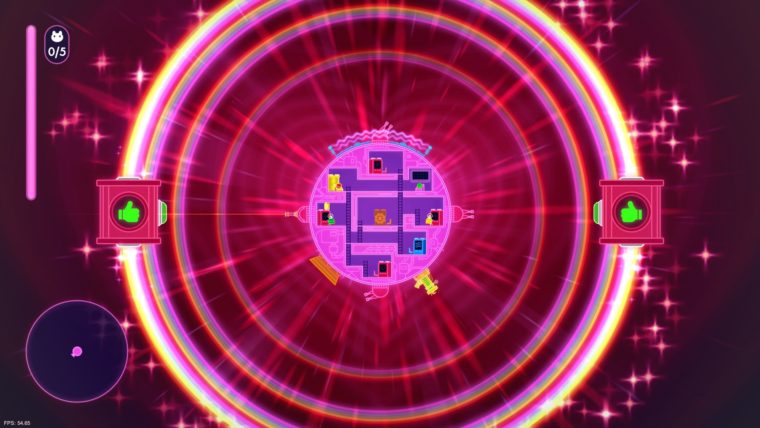 The lack of an online component is a definite deterrent for those that don’t have a friend ready and willing to join them in-game. You can still play Lovers in a Dangerous Spacetime by yourself, but it requires you to direct an AI teammate to the other stations. This wouldn’t be a huge detriment to the game, but the AI won’t navigate the ship at all, leaving that task to the player. This gives the feeling of being a chauffeur, rather than a daring spaceship captain, since you pretty much have to stay on the move except in very specific situations. As you fly through space, directing your AI teammate to the requisite turret for the current scenario, you’ll likely feel as though you’re missing out on all of the fun.

Despite this, even playing by yourself, there is a lot to enjoy in Lovers in a Dangerous Spacetime. The game has a visual style all its own, with colorful, vibrant, and beautiful landscapes being presented in each and every level of the game. The music only enhances this, with its techno vibe making for a soundtrack that will stick in your head for some time. Then there are the unlockables, which should give players a lot of motivation to keep playing even past the end credits.

The higher your level rank, the more things you unlock in-game, such as different ships, playable characters, and more. You gain levels by rescuing prisoners in each mission. This give players a lot of incentive for both replaying the game, and making sure they grab everything on their first playthrough. This tension, between getting out of a dangerous situation, and nabbing that last prisoner will provide a lot of fun in the game. 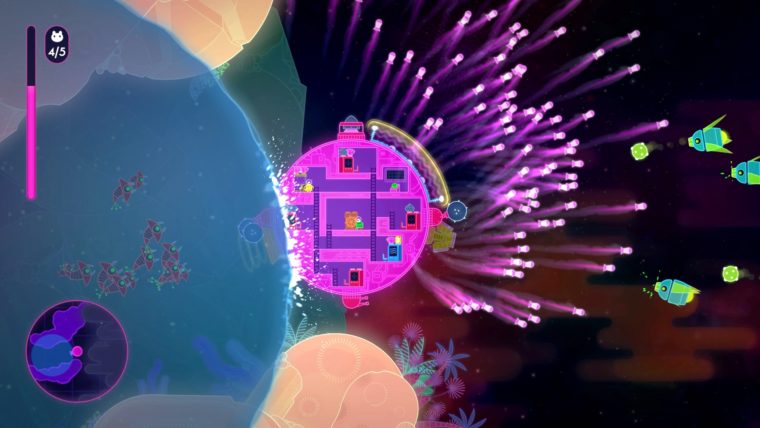 On top of the unlockables are in-game modifiers and upgrades. Here is where Lovers in a Dangerous Spacetime takes its rogue-lite inspiration. Each main mission consists of five levels, with the fifth being a boss stage. On your way to the boss you can grab crystals that change the way each of the ship’s stations functions. Some make them more powerful, others add a laser beam element, and the metal crystal can strengthen, or change the way the station operates completely.

Later in the game, as you upgrade your ship, you can mix and match these crystals together. Put a power and a beam crystal on one of your turrets and watch as it rapid-fires laser beams at your enemies. Throw a metal and a power crystal on your shield and you have a bigger one that will absorb enemy shots, turning them into extra shield branches. You never really know what these crystals will do until you combine them, and this will be one of the most fun parts of the first few hours with Lovers in a Dangerous Spacetime.

Tons of unlockables, fantastic visuals, a catchy, upbeat soundtrack, and unique gameplay combine to form a gaming experience like few others. If you have a friend who is into couch co-op and can be at the ready to play Lovers in a Dangerous Spacetime at a moments notice, then the game will certainly be a favorite. However, for those that have a more solitary gaming experience, the lack of an online multiplayer component could be a deal breaker.

Lovers in a Dangerous Spacetime