The latest news in the world of video games at Attack of the Fanboy
August 24th, 2015 by Dean James 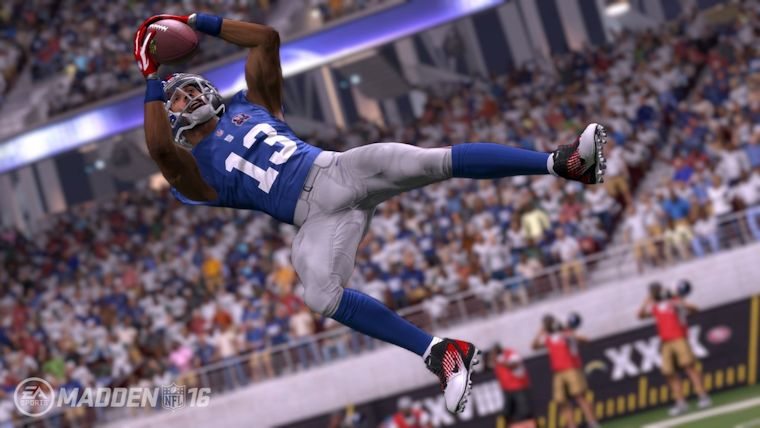 The annual franchise is something that has become even more prevalent in modern times, but the Madden series of games has been one ever since its console debut back in 1990. Over the more than 25 years, the numerous entries in the premier football simulator have varied in just how different they are over their predecessors. Coming off very strong recent outings, Madden 16 keeps the momentum going with upgraded mechanics at key positions and the introduction of a fantasy-minded game mode.

The Madden series has always served as a simulator of each NFL season, giving fans of the sport an opportunity to use their favorite teams and players in a variety of different game modes. As a result, the actual gameplay itself must be as true to life as possible, and EA Sports has really knocked it out of the park in that department in Madden 16.

Football fans want to see the game they know and love translated to a video game and this iteration looks and feels just like the real thing in Madden 16. The fluidity and control out on the field still feels very natural and the graphics are the most realistic in the series, thanks to face scanning. This is seen very early in the mock Super Bowl matchup shown between the Pittsburgh Steelers and Arizona Cardinals that even has voice acting and closeup cutscenes with Ben Roethlisberger and coach Mike Tomlin.

Last year’s game saw the defense getting a lot of attention, but the offense was mostly the same. In Madden 16, the developer did a fantastic job at improving both sides of the ball, with offense getting a little more focus this time around. The big change in the gameplay revolves around the ball in the air, affecting both the receivers and defenders in the process.

New York Giants star Odell Beckham Jr. is on the cover after a stellar rookie season, which is fitting with the improvements to wide receivers that allow for more spectacular catches, which Beckham Jr. provided plenty of last season. Once the ball is in the air, receivers will still catch the ball if they are open, but you can better that with a button press.

Aggressive catches see the receiver going up for a ball, at the highest point usually, which is perfect when playing close to a defender deep down the field. With downfield catches being such a problem in the last couple years, this greatly helps, but they also did a great job at giving this weaknesses as well, to maintain balance in the game. The other two are Run After Catch and Possession Catch, which are utilized in much the same way, allowing you to gameplan in more detail upon picking a play.

Along with the wide receiver improvements, quarterbacks have also got some new tools in their arsenal that makes passing the ball a ton of fun again. In the past, you could throw a lob pass or bullet pass, and those two still are done in the same way, but they also added three other methods of throwing that can help in specific situations. The touch pass is a big pass style in the NFL and its implementation here is very solid, especially across the middle. The ability to make high and low throws is also very helpful, which can then be used in tandem with the new receiver abilities to give the passing game a great feel this year.

With the passing game getting some major improvements, EA Sports could have fumbled the ball and have made playing defense much tougher. However, defending has also been improved, which makes playing in the secondary actually an option for even a lesser experienced player. In the past, it was very hard to make the switch to the defender while the ball was in the air, as you would almost always get beat. The ability to switch and then choose to Play Ball or Play Receiver actually allows you to do just that with good results a lot of the time, once you get some practice of course.

Actually getting to play through the ongoing NFL season is a key part of Madden and Connected Franchise offers just that. The main problem with this mode in recent years is that it has been somewhat stagnant. However, the addition of new Drive Goals adds just enough to give the rather simplistic Connected Franchise mode a little more depth.

The Drive Goals give you something else to play for within each game, besides just aiming to win. There are a massive amount of these that show up in the game, such as targeting a specific player a certain number of times to gain XP and confidence. Based upon the name, these naturally change each drive, which adds a new wrinkle to each one beyond what you are used to in the past, though Connected Franchise still feels like it could be much more than it is. 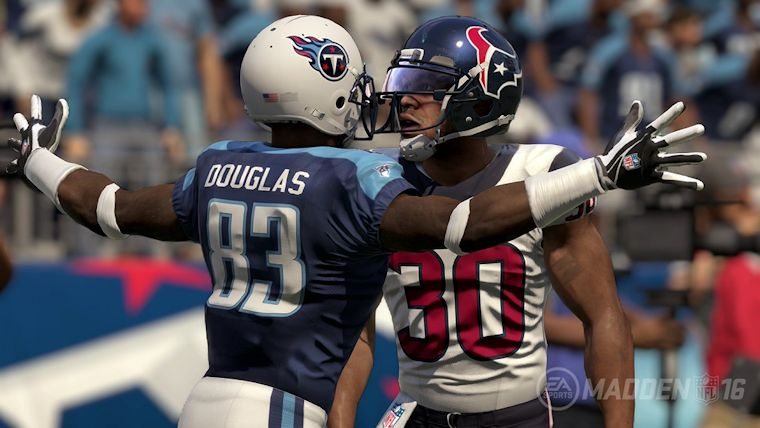 Every entry has always provided the ability to at least play a simple franchise mode or have the ability to play against another team, but the most important aspect is just how the game can keep gamers interested year round. Madden Ultimate Team has done a good job of this in the past and that has returned this year, along with an entirely new game mode that may just be one of the biggest selling points for the series these days.

Madden Ultimate Team still plays much like it has over the last few years, but the inclusion of Ultimate Moments and Solo Challenges give you more to work with. These real-life situations recreate events from the past, such as the end to last year’s Super Bowl, with you getting the chance to change history. The weird part is that you actually use your Ultimate Team in the situation instead of say the Seahawks in the Super Bowl, which is definitely different. It would have been nice to see these Ultimate Moments available outside of this mode too, but that’s far from a big issue.

Madden 16 makes passing the ball a ton of fun again

Fantasy football has for years now been a phenomenon and that doesn’t look to be changing anytime soon. As a result, it makes perfect sense to bring that into Madden, which EA Sports has done with Draft Champions mode. Similar to a typical Snake draft, one or two players can do a 15-round draft that is quite different from the usual. If you draft solo, you can face off against a group of CPU players, while multiplayer  has you drafting a team and then taking it online.

Instead, you start with a really weak base team and then are presented with three players at different positions for each round, while also getting to pick a coach from among three choices as well. You really will have to make big decisions here, with tough choices between players like RB Adrian Peterson and TE Rob Gronkowski early on. In addition, the final pick is always a classic player, which is not only a fun addition, but also greatly helps your team with really high stats.

Players have the ability to actually strategize on who they want, whether they want to go with the sexy pick to stack one position or fill in a much weaker position elsewhere. Choosing whether you think that a RG on the offensive line or a FS in the secondary can be a major decision, which makes this so much fun. 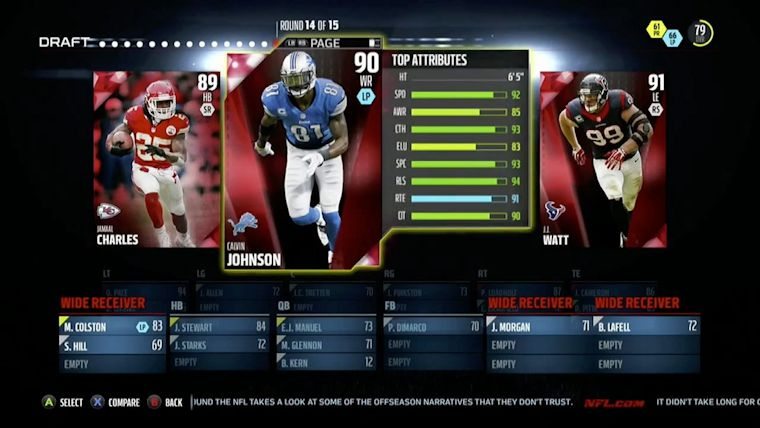 The pick up and play style of Draft Champions is perfect for when you have a few hours to play and is something that will continue to be fun all through the year. Hopefully this is merely a blueprint for a full scale snake style fantasy football mode in the future, which would be absolutely fantastic.

EA Sports has taken what was great the last few years with the Madden series and continued that excellence in Madden 16. The gameplay feels as fluid as ever, with the new receiver and quarterback mechanics standing out by far. Draft Champions is easily one of the best additions to the series in a long time and hopefully is only a taste of what is to come in the future, which is in and of itself proof that Madden 16 is far from just a roster update and is definitely not a year to skip.