Mario RPGs have been both enjoyable and woefully under-appreciated ever since the first one hit the SNES with Super Mario RPG: Legend of the Seven Stars. The format has splintered off into a few iterations, with the Paper Mario and Mario & Luigi series both handling it quite well on consoles and handhelds respectively. Now the two are merging together though, with a crossover that looks to revitalize the Mario & Luigi series and combine these two great universes. Thankfully this merger was exactly what was needed, and the two form an even better experience for players to dive into.

Mario & Luigi: Paper Jam starts off with Luigi and Toad exploring the attic of Peach’s Castle. There they stumble across and drop a book which is apparently filled with the entire Paper Mario universe. Characters and scenery from this universe come spilling out into their world, creating a bit of chaos. The real problems start once the enemies start teaming up though. With two Bowsers to contend with, can Mario and Luigi handle the looming threat? If they want to have any chance at all, they’ll have to team up, but also find a little help of their own.

The story of Mario & Luigi: Paper Jam is appropriately silly and simple. The entire series, along with Paper Mario, has always been gleefully self aware, making references to series tropes, as well as the fact that the whole thing takes place in a video game. That trend continues here, with characters quickly pointing out how the plot is supposed to unfold, and how it will all turn out in the end. 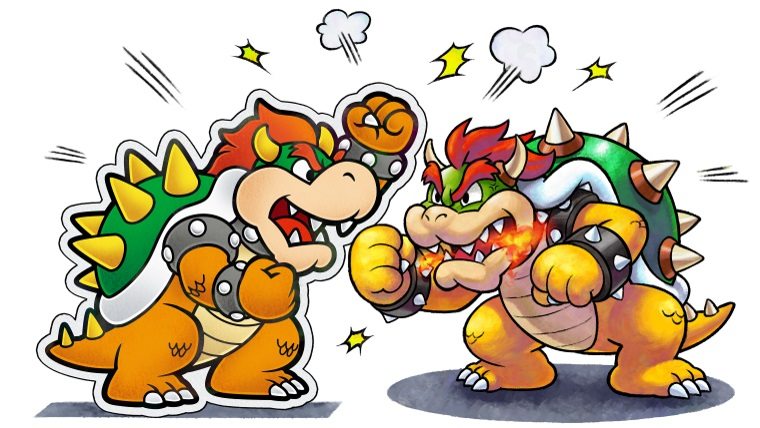 The power of Mario & Luigi: Paper Jam comes in its script, which is delightfully humorous and witty. There are some genuine laugh out loud moment contained in the game, and there are nice touches of humor sprinkled throughout. Adding in the Paper Mario universe only served to enhance this, with jokes about how flat the paper characters are, and how round the others are in comparison. The fact that this works well is also a testament to the localization effort, as humor is pretty tough to translate, so they likely did a lot of extra work on this one.

That isn’t Mario & Luigi: Paper Jam’s only strength though, as the gameplay is a fun mixture of classic Mario and RPG element. If you’ve played previous games in either series there won’t be too many surprises here. You still enter into turn-based combat where your timing is a huge key to victory. You select your attack, such as Jump or Hammer, then watch as Mario or Luigi prep for the attack. At some point you have to hit the button again in order to queue up a secondary, and sometimes more, attack, doing extra damage as you do. The formula wasn’t broken, so they didn’t try to fix it, but they did add a bit to it.

You can also defend against enemy attacks, using their posture and other visual cues to figure how which character they’re going to hit. This also has a timing factor to it, as different enemies attack in different ways. Your timing is crucial here, as you might miss the dodge and be hit with the attack, but also you can turn things around to your favor. If you time your jump right you can usually deal an extra blow to the attacking enemy, wich is truly satisfying when you pull it off well.

The usual Bros. Attacks also make a return, letting both Mario brothers attack at the same time. You need to time your hits with this, as, for example, a turtle shell will bounce between Mario and Luigi, striking the enemy whenever you hit it right. A third character gets introduced into the mix shortly into the story though, and this unlocks new Trio Attacks where all three are involved. 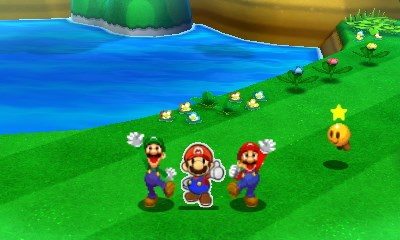 This use of all three characters extends out of battle and into the regular game modes as well. You move Mario around the level with the circle pad, with his two compatriots following right behind. However, to jump or interact you have a specific button assigned to each character in the party. Jumping over ledges can be a bit of a chore, as you have to hit all three buttons in succession in order to do so, but overall it’s a fun way to interact with the world, and generates some nice moments, like when a special block requires you to hit it in a certain order, using all three characters.

Exploring the world, taking on missions, fighting bosses, everything contained in Mario & Luigi: Paper Jam has a wonderful mix of variety to it. Once you become tired of the standard gameplay, it seems like something new gets thrown at you and added to the mix. This includes boss fights that alter halfway through and segments where you take control of a huge, papercraft version of Mario.

This latter part would never sound like something that was fun or interesting for a Mario title, as you control a slow moving giant as it slams into other paper monstrosities. However, it comes together quite well, and does a great job of breaking up what could become a monotonous affair.

Missions however can get a bit tiresome. Many simply task you with exploring segments of the map, looking for Paper Toads that have become lost, or are actively running away from you. Most of the time you can locate them very easily and move on, but if one escapes your attention, perhaps because they’re actually well hidden, or they’re simply in an area that you keep passing by without looking, then it can drag on for far too long. It becomes worse the more times this mission is presented to you, enhancing the frustration if you don’t have a fondness for running around the same area for a few minutes. 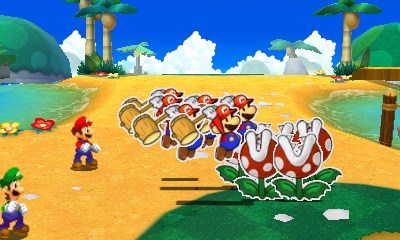 Another small misstep is in the visual department. The 3DS is actually a decently capable piece of hardware, but Mario & Luigi: Paper Jam doesn’t show that off too well. The paper elements are fun and interesting to look at, but the regular Mario & Luigi art style feels like it could use an upgrade. This is a bigger game than the 2D sidescroller Mario titles, but the visuals could still do a better job of keeping parity with those games. It’s not terrible to look at, but it definitely could be improved next time.

Mario & Luigi: Paper Jam is a wonderful mashup of two already great series. The visuals aren’t all that impressive, even for the 3DS, but the gameplay is classic Mario RPG stuff. Fans of either series will like how these two come together in the story department, with a truly enjoyable script that will have players laughing throughout. Not much has been done to alter the gameplay necessarily, but it’s still the same great mix of turn-based combat, and real-time reactions.