Miles Morales swings onto PC and sticks the landing. 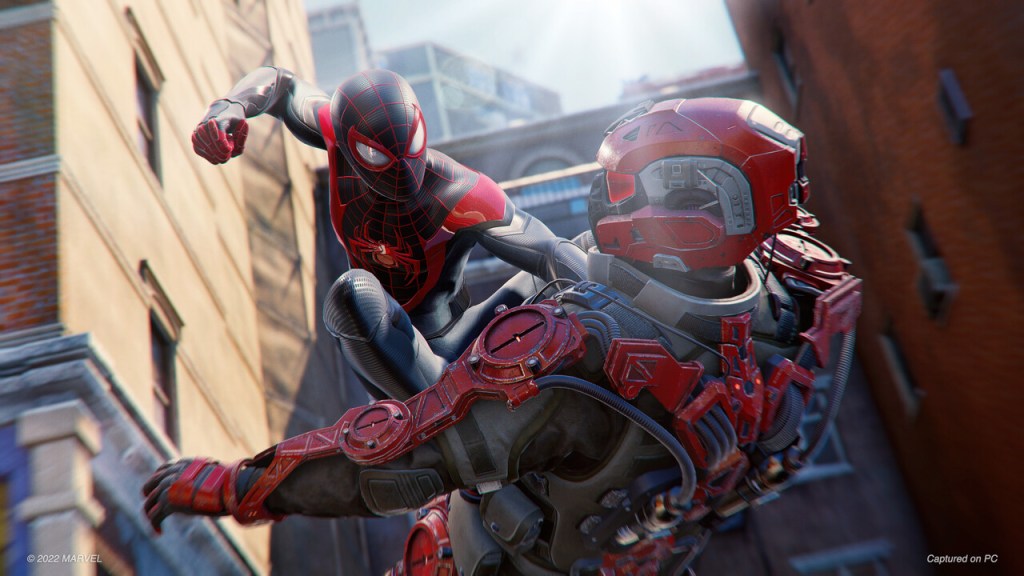 Sony’s PC push to bring PlayStation first-party games to the platform has ramped up dramatically this year, with the publisher even going so far as to establish a separate PlayStation PC publishing label for Steam releases. This year alone, PC players have been treated to God of War, Uncharted: Legacy of Thieves Collection, Sackboy: A Big Adventure, and of course, Marvel’s Spider-Man Remastered. Now, Miles Morales swings onto Steam just a few short months after Peter Parker’s PC debut, and this outing is a stellar port of an excellent game.

We loved the initial release of Marvel’s Spider-Man: Miles Morales when it hit PlayStation 4 and PlayStation 5 in late 2020 as a launch title for the latter. We awarded it a score of 4.5 stars, praising its pacing and characters and calling Miles “the most compelling Spider-Man yet.” That still rings true for the PC port of Miles Morales, except the Steam version comes with a bunch of extra bells and whistles that are to be expected with PC ports these days.

Marvel’s Spider-Man: Miles Morales on PC boasts all of the features present in the PlayStation 5 version of the game such as ray-tracing and DualSense controller support, but the Steam version includes some additional PC-specific additions that fans are sure to appreciate. If you want to run ray-traced reflections and shadows and maintain a high framerate, the game supports NVIDIA DLSS and other upscaling techniques. It’s also one of the first games to support NVIDIA’s DLSS 3.0, letting owners of the new RTX 4000 series graphics cards push their beasts even further.

Even if you’re not using ray-tracing, DLSS and other upscaling techniques allow you to maintain ultra-high framerates at high resolutions like 4K. Miles Morales also supports several different aspect ratios just like Spider-Man Remastered, maxing out at 48:9 with multiple monitors thanks to NVIDIA Surround or AMD Eyefinity. If you have the hardware, Miles Morales will let you go as far as you want with it.

Of course, all of those features are to be expected with high-profile PC ports these days, and none of them matter if the game isn’t any good. While most people are already aware, Marvel’s Spider-Man: Miles Morales is an excellent video game. Our original review is still applicable today, and Insomniac’s rendition of a snowy New York during the holiday season looks and runs better than ever on PC. Unlike my rocky time with Spider-Man Remastered, performance was rock solid even at 4K, too.

While his character was likable in Spider-Man Remastered, Mile Morales really comes into his own during his standalone adventure. With Peter Parker out of the picture for the holidays, Miles is left to contend with supervillains as New York’s only Spider-Man for a while. He’s a bundle of shock and nerves, but he’s clearly eager to put his superhero skills to the test. Nadji Jeter’s performance as Miles is fantastic, and he even comes across as a more compelling character than Peter in some regards.

Marvel’s Spider-Man: Miles Morales is a much shorter adventure than Peter Parker’s journey in Spider-Man Remastered, however, and that’s both a blessing and a curse. Insomniac has trimmed much of the fat from their formula, leaving Miles with all killer and no filler. There are still plenty of side activities to take part in if you’re craving more Spidey goodness, but the main story has much faster pacing during Miles’s outing and it’s much better for it.

Miles also has a new set of powers that differentiate him from Peter, opening up new avenues for creativity during combat and traversal. His venom powers let him smack foes with devastating punches during fights and allow him to instantly gain height and speed when swinging through the city. He also has the power of invisibility, adding a new layer to the basic stealth system established in Spider-Man Remastered.

Despite them both being Spider-Men, Miles feels very different from Peter in every regard. That’s largely due to the appreciation that Insomniac clearly has for the character. Not only is Miles written by fans, but his animations set him apart as a Spider-Man in training. His swinging is clumsier and gets more awkward at higher elevations, he’s more acrobatic and nimble during combat, and he relies more on cunning rather than gadgets overall. Seeing him grow into the suit and master his powers is a compelling arc, and even though he’s a household name now due to the success of the Spider-Verse film, it’s still nice to see a fresh face like Miles Morales leading his own game.

Ultimately, however, most of you don’t need a review to convince you to buy Marvel’s Spider-Man: Miles Morales on PC. If you want it, then you want it. It’s been out for two years at this point and everyone already knows how great both it and its predecessor are. Whether it’s your first time swinging through the city as Miles Morales or you’re double dipping on the PC version after playing through once on PlayStation, Marvel’s Spider-Man: Miles Morales is an excellent experience on PC.