The latest news in the world of video games at Attack of the Fanboy
September 6th, 2015 by William Schwartz 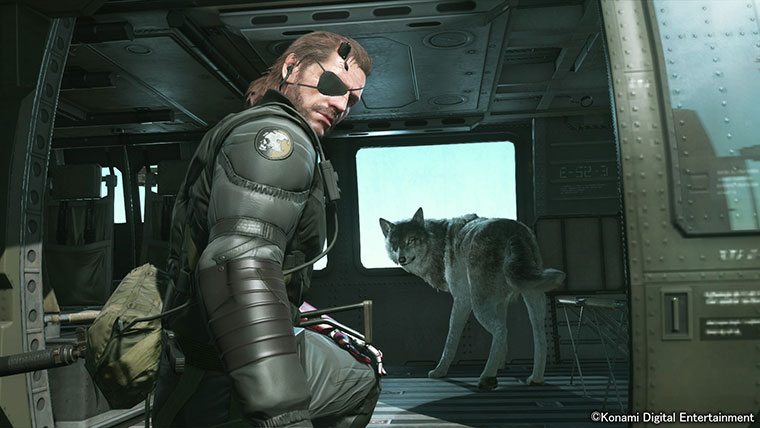 Regardless of what Konami decides to do with the franchise, Metal Gear Solid V: The Phantom Pain is arguably the last true game in the series.  Hideo Kojima has been talking a lot in recent years about wanting to work on other projects, and he’ll now get his chance, but he leaves the Metal Gear series at the top of his game.  Metal Gear Solid V: The Phantom Pain will go down as the best-looking, best-playing, and most ambitious game in the series — one that utilizes the new-gen hardware and the incredible Fox Engine to deliver both a visual masterpiece and a more robust gameplay experience than its predecessors.

The Phantom Pain differs most significantly from previous entries in the Metal Gear Solid series in that it is a open world game.  This open world is combined with the stealth gameplay and gadgets that fans have come to expect from the series, and the results are nothing short of spectacular.  It’s also a game with more systems in it, more things to collect, more over-arching aspects to manage.  These new and old gameplay aspects gel incredibly well with the best-in-class cinematography, voice acting, and beautiful in-game visuals.

The Metal Gear series is a complicated beast from a story perspective and we’re not going to try to explain it here.  Hopefully, you know who Big Boss is.  You might not. After all, he kind of looks like Solid Snake. It would be understandable if you didn’t know the minutiae behind the Metal Gear series, but you don’t necessarily need to have all the twists and turns processed to have fun with MGS V.  The Phantom Pain storyline resides somewhere after Metal Gear Solid: Peacewalker and somewhere before the original Metal Gear NES title that launched in the 1980’s.  The best thing you could do to prep yourself for the Phantom Pain is to play Ground Zeroes, as that will at least give you some frame of reference for the events that are set to unfold.  Regardless, in The Phantom Pain, players control Big Boss as he awakens from a nine year coma.  The Phantom Pain is the story of Big Boss and his quest to rebuild the private military group The Diamond Dogs.  As in all Metal Gear games, the story gets a little more complicated than that.  This time around though, Metal Gear doesn’t waste as much time on the story as it’s a much more compelling gameplay experience than ever before. That may or may not sit well with some fans.

Metal Gear games have always given you a sense of freedom in how to attack your objectives, but overall, they’ve been pretty linear.  The stealth gameplay of previous games is still the heart and soul of The Phantom Pain, but things have changed drastically from Guns of the Patriots.  This time around, you’re simply not just travelling down a story path.  You’ll of course be given missions to complete to progress the main story along, but you’re also tasked with building Mother Base in the process of all of this.  This offshore rig is the home of The Diamond Dogs, and it requires Big Boss to recruit soldiers, find supplies, armaments, and other items to bolster its strength.  Almost all of Metal Gear Solid V is multi-tiered in this fashion and your progression with Mother Base is in lockstep with the progression on the story front.  You are constantly not only looking to complete your objectives but to also build an army. 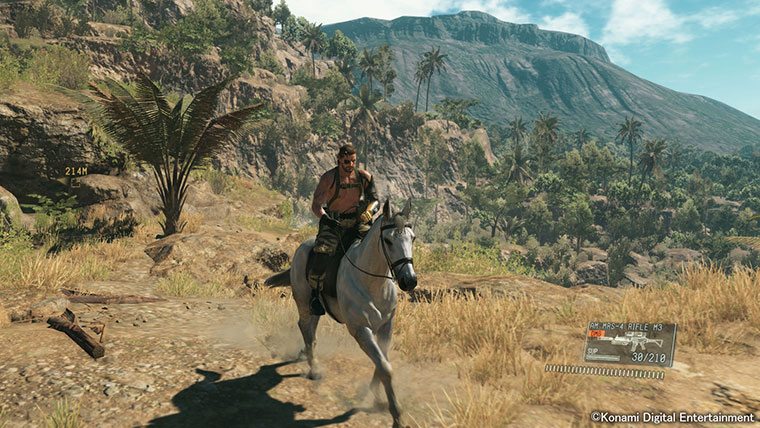 This where the open world structure is a perfect fit for this Metal Gear game.  Missions have Big Boss dropping in on a sprawling map that’s littered with nothing but opportunity.  Enemy outposts can be taken over and ransacked, or you can just explore if you wish.  Staying out of sight will make things easier, as the core stealth gameplay that fans of the series have come to know and love is still very much the centerpiece of it all.  There’s just more room to work with in The Phantom Pain.  The maps are bigger, they feature large outposts, missions require multiple steps and treks across this massive world, side-missions have purpose and offer great rewards.  Everything feels meaningful, and this game’s triumph is that there is so much of it.  In many ways, Metal Gear Solid V:  The Phantom Pain is the stealth genre’s answer to games like Far Cry or Skyrim, something that builds a convincing world around the player and then gives them both great gameplay and systems to sink hours upon hours into.

In missions MGS V feels close to its roots.  Stealth gameplay has you trying to avoid enemy patrols, using weapons like tranquilizer guns to neutralize enemies and keep things on the hush.  You can interrogate patrols if you catch them off guard, and you can still do all the luring and outwitting things that previous games have had before.  But Metal Gear Solid V just looks and plays better than all the previous iterations.  There’s a smoothness to the stealth gameplay that puts it in a league of its own when comparing it with its peers in the third person department. The Phantom Pain is also a game where missions can change on a dime.  Things can go from running smooth and quietly to a safeties off gun fight rather quickly.  It’s whatever the situation calls for in most cases, but it’s also up for some player interpretation as well.  If you’re comfortable with going in guns blazing, you can do that at will and MGS V plays quite well in that department.  But there’s a big reason not to and that’s your goal in building The Diamond Dogs. 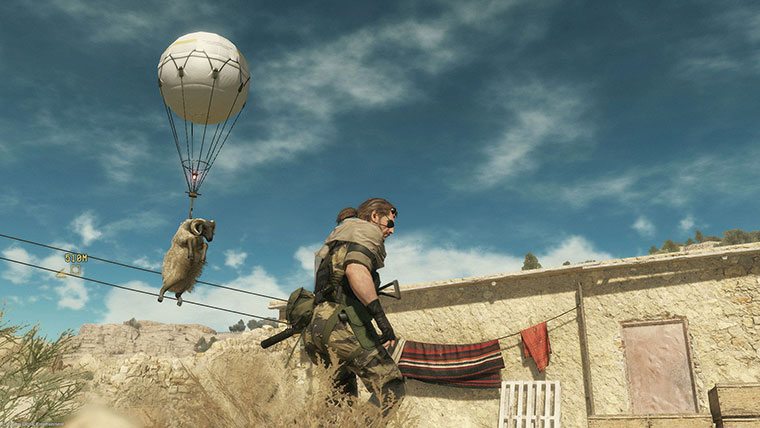 Mother Base and your Diamond Dog army is constantly churning in the background of Metal Gear Solid V.  They give Big Boss a lot of advantages in the battlefield, and the only way to grow this army is to recruit soldiers, complete side missions, gather supplies, and perform other activities that add to the bottom line of the war machine.  You’re almost instantly introduced to the game’s Fulton Recovery System that was originally introduced to us in Metal Gear Solid: Peacewalker.  If you’re not familiar, it allows Big Boss to recruit any soldier he encounters while on a mission.  Simply attach the Fulton to a soldier and it will transport him back to Mother Base where he’ll be coerced to join your army.  The kicker is you can’t Fulton dead or badly injured soldiers, giving you an incentive to take a non-lethal approach.  Upgrades to the Fulton allow for Big Boss to secure vehicles, weapons, cargo crates, among other items to build his army.

As you recruit soldiers, you’ll also be managing different teams back at Mother Base.  These teams have a number of different functions, and each soldier you recruit has a seemingly random aptitude with varying abilities, and usually best suited for a specific team.  Making sure you’ve got the right soldiers on the right teams will help out immensely in offering you new weapon options or new technology to use while in the battlefield. But it all feeds back into a pretty engaging loop.  You constantly need to be recruiting new soldiers and acquiring the required materials that you find when you’re out on missions to keep the progress flowing nicely.  Metal Gear Solid V: The Phantom Pain really does a good job of making you feel like everything matters as you press forward. As the game progresses, as does your army.  You’ll be afforded valuable intel before heading out into the field.  Some recruits can even be sent on missions of their own.  Leveling up your your R&D department will allow you to research new weapons.  In fact, you can do it all while you’re out in the field as well.  Come across an outpost that would best be taken by sniper fire from afar?  You can simply research the sniper rifle and have it air-dropped to you in real time, so long as you have the funds to do so.  One of The Phantom Pain’s best achievements is that everything is so seamless, the building of Mother Base and The Diamond Dog army, your character progression and the story.  Where lesser games may feel disjointed with all these different aspects vying for your attention, The Phantom Pain always feels cohesive. 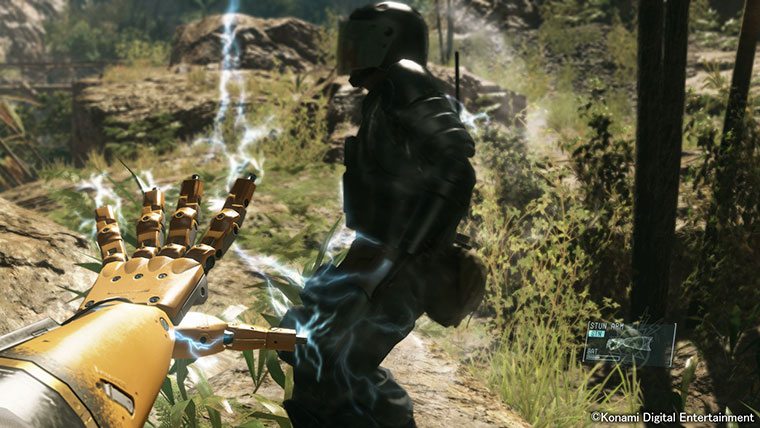 The final piece of this puzzle is the inter-connectivity between the Mother Base that you’ve built and the real world of others playing Metal Gear Solid V.  The FOB feature in Metal Gear Solid V has seen intermittent connectivity in the days after launch, but what’s there when available is a pretty impressive pvp game mode that allows online intruders to infiltrate your base.  Which is another game within itself as you are given the ability to use your army’s resources to deter and stop these intrusions.  Unfortunately, due to the limited connectivity of this aspect of the game, we haven’t had an opportunity to test this functionality out for an extended period of time.  But it feels like it’s more of a sideshow to the main campaign than anything, anyway.  Eventhough online connectivity has been limited, it doesn’t take away anything from the fantastic single player experience.

Kojima really pivoted on The Phantom Pain when you compare it to previous games in the series. This is a much different type of experience than even Metal Gear Solid 4.  It relies less on story to keep players engaged.  Story telling scenes don’t run on the way they have in the past.  These have largely been replaced by cassette tapes that fill in the story holes.  You’re not tied into specific conversations for lengthy periods of time.  You’re always being shepherded towards gameplay things to do in achieving your overall goals. That’s not to say there isn’t a bunch of imaginative content in The Phantom Pain, there is.  You still have some pretty incredible set piece moments, twists and turns in the plot, and Kojima Productions and the impressive Fox Engine has surpassed all expectations in terms of presentation.  Photorealistic environments coupled with lighting tech really shine in this release, making the world they’ve created all the more believable and tying together these gameplay elements in ways that few other games do.  From in-game missions and their environments to the story elements the push the narrative along, all the way down to the user interface — Every aspect of the Phantom Pain feels like it was given a second or third pass to make it look and feel like a true masterpiece.

Metal Gear Solid V:  The Phantom Pain exceeds even the wildest expectations of what is possible for a sandbox stealth title.  While it deviates slightly from what we’ve come to understand a Metal Gear title to be, The Phantom Pain’s new additions make up for it in spades to sit atop the heap as the best Metal Gear game in the series.