What else can possibly be said about Minecraft that hasn’t already been explained in hundreds of reviews and YouTube videos before? The game is amazing. Sure, it has problems. Some of them are massive, while others are quirky and fun. The end result is a game like none other, allowing endless exploration, creativity, and fun. This was true for its many iterations before, and it’s true once again for Minecraft: Nintendo Switch Edition. However, this version of the best selling game has a few things that make it slightly worse than others, but it also has one really big reason why it might be the very best.

Whenever a new version of Minecraft comes along, there are always the same questions. How does it run? What is different? Those sorts of things. Before we dive into that though, let’s talk about what’s the same between older versions and Minecraft: Nintendo Switch Edition.

The gameplay is still the exact same, with players exploring massive, randomly generated maps. Survival is key in the main mode, with players having to forage for food, until they build up enough resources and skills to start farming. Mobs come out at night to pester the player, creating an always tense environment whenever the sun goes down. Once you start exploring you find the real draw of Minecraft’s main gamemode: exploration and adventure. Caves hold endless possibilities, and underground surprises always delight. If you’ve never played Minecraft then first, what’s wrong with you? And second, it’s not really something you can describe, you just have to try it to find out. 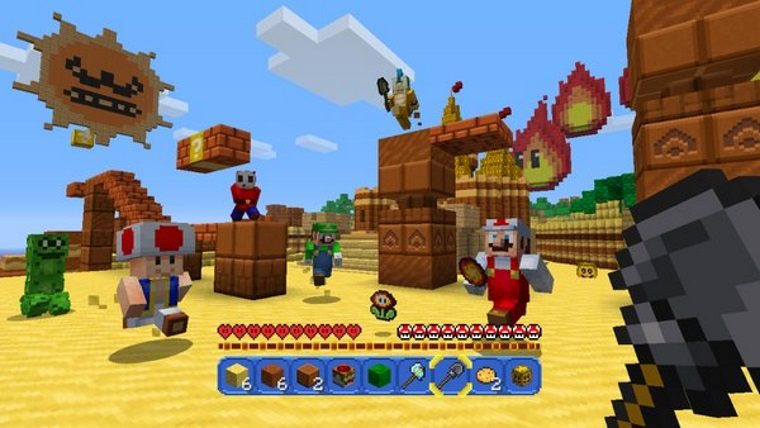 The real fun of Minecraft is in its open nature though. Some turn off the strictures of Survival Mode, allowing them to craft anything they want. Others like to figure out how to make their crazy creations work within its confines. However you like to play, Minecraft: Nintendo Switch Edition allows it just like its many predecessors. You can create vast, elaborate levels for you and your friends to enjoy (though multiplayer features are still being ironed out), or you can spend endless hours exploring every nook and cranny of a randomly generated world. It’s all here once again and it’s all just as fun.

This is simply the best portable version of Minecraft available

The big thing that separates Minecraft: Nintendo Switch Edition from its predecessors is that we now, finally have a true mobile version of the game. Sure, there is the official Mobile Edition that exists on phones and tablets, but it is missing some key features found in the PC and console versions. The PS Vita got the full edition, but that system struggles to keep up, and has always felt like a bit of a wasted opportunity. Now the Switch is capitalizing on that opportunity, offering the true Minecraft experience in an easy to transport package.

This is where one of those earlier questions becomes very pertinent. Performance is a big part of the Minecraft experience, and the game is notorious for being a resource hog. Playing the game on a handheld has always been a dicey proposition, but the Switch handles it exceptionally well. Not perfectly, as the undocked version does limit the draw distance a bit more than seems necessary. But the trade off seems to be in overall performance, including the 720p resolution and solid 60fps framerate. Surprisingly, the game even runs well when you have splitscreen going, allowing for the crazy situation where four people are playing on the Switch’s 6.2 inch screen.

In docked mode the game runs just as well with the added bonus of the extended draw distance expected of these newer Minecraft versions. Everything else stays largely the same, with a bump in resolution to 1080p (at least apparently so, we don’t have confirmation of this). In both modes the game runs extremely well and looks fantastic. You won’t get the massive draw distance of the PC, but if you’re looking at console versions then the Switch certainly stands alongside its counterparts in the performance realm. 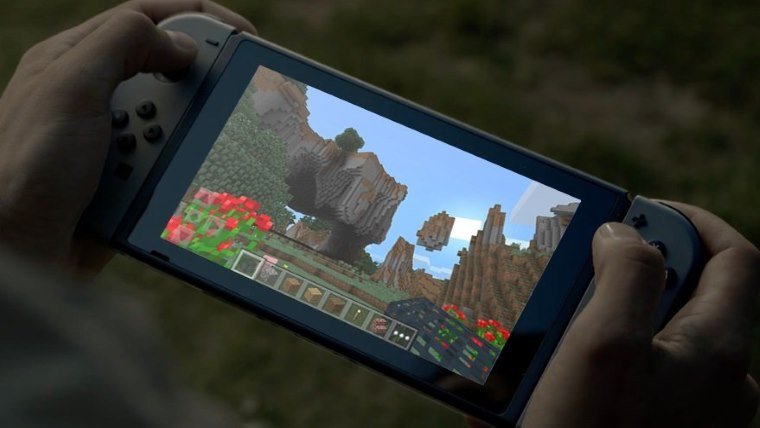 World sizes are the only major drawback of Minecraft: Nintendo Switch Edition, when compared to those on PS4 and Xbox One. Yes, they are smaller, but they’re also far larger than what was seen on Wii U. The worlds also simply feel large enough, even if they are technically smaller than what can be found elsewhere. In creative mode it can take multiple minutes to fly from one side of the map to the other, meaning that through normal play you’ll likely find the world to be big enough for most purposes, and the scrolling load option allows for seemingly bigger worlds, if you’re willing to sacrifice previously explored territory.

Along with all of this come the usual bonuses found in other console editions of Minecraft. Mini-games are in, as are a multitude of texture packs. One unique feature is the Super Mario themed textures that come with catchy and fun Mario music. The game is currently lagging behind a bit in terms of updates, with 4J saying that it is up to where other versions were in January. Expect that to end soon though, with updates bringing it more in line with PS4 and Xbox One.

One unfortunate thing that is lacking from Minecraft: Nintendo Switch Edition is strong touch screen controls. It’s not wholly surprising, as we’ve seen this with previous versions. You can use the touch screen to change your active item on the inventory bar, like you could on Wii U. You cannot use it to select, move, or craft items though. This would have really made this version stand out among the many iterations of Minecraft, so its exclusion is hard felt, though still not totally detrimental to the experience.

Whether or not Minecraft: Nintendo Switch Edition is worth adding to your library comes down to what you want out of the game. This is simply the best portable version of Minecraft available. It runs well, the worlds are large, and the solid 60fps framerate can’t be oversold. Splitscreen on the go is fantastic, though anything beyond two players gets a bit crazy. On the TV this isn’t the best version out there, but it’s solid enough to compete with its console brethren. If you haven’t played Minecraft, or just want it in handheld form, then this should be an easy buy.