The latest news in the world of video games at Attack of the Fanboy
October 14th, 2015 by Kyle Hanson Minecraft, before it became a massive global phenomenon, was infamous for its lack of a story. What do you do? People would ask, baffled at why you were in this strange world, and what exactly was going on. The answer, of course, was to just have fun, but the lack of a story still lingered somewhat in many players’ minds. Now, Telltale has taken on the task of adding a story to the game, but not as an overarching canonical explanation of what a Creeper is, or why Villagers make those strange honking noises. Instead they do what they do best; take an existing property and tell their own tale within its established universe. The result is Minecraft: Story Mode Episode 1, a fascinatingly original take on the popular franchise, that will easily please younger fans, but might take some more effort to get the adult crowd.

Players control either a male or female Jesse, who is about to enter a building competition with his/her friends. The prize of the competition is to go to Endercon and meet with Gabriel the Warrior, one of the fabled Order of the Stone, who slayed the Ender Dragon many years earlier. Of course, things don’t quite go as planned, with the crew ending up at Endercon, but with a very different mission. Ultimately, a big bad monster begins causing trouble, and the group is off on an adventure, with the task of reuniting the Order of the Stone to take down this new beast.

This is Minecraft: Story Mode Episode 1

Minecraft: Story Mode exists in a sort of meta Minecraft universe. The characters exist within the world of the game, facing off against Creepers, and building things with the usual blocks. However, it doesn’t feel like a true Minecraft story, in that it doesn’t explain the origins of the world or its characters. This is definitely for the best, as trying to explain the world of Minecraft could easily take away a good portion of its charm. The meta nature of the narrative is used to pretty great effect, making pop culture references, as well as inside jokes about the nature of Minecraft. Many of these jokes will delight younger fans, but this is certainly not Tales from the Borderlands, so don’t expect any non-family friendly material.

The story and humor definitely skew younger, but there’s almost enough here to keep the interest of more mature gamers

This was always the biggest fear with Minecraft: Story Mode, that it would lose some of Telltale’s bite. This is no The Walking Dead or Wolf Among Us, leaning more toward comedy than drama. But it also can’t be like Tales from the Borderlands, which relies on violence and other mature elements for a lot of its humor. The result could have easily turned out feeling like a kids game if Telltale hadn’t played their cards right. Luckily, it is clear that Telltale knew the dangers and have actively tried to keep the game fun and interesting for all age groups.

The story and humor definitely skew younger, but there’s almost enough here to keep the interest of more mature gamers. Still, the feeling does linger throughout that players are not in for the usual dramatic affair they might have come to expect from the developer. The story is the main component of this though, with Jesse’s band of friends setting off on a very traditional adventure. Many of the story beats are pretty obvious long before they actually hit. Those who have played a lot of games, or watched a lot of movies will be waiting for certain story turns to land, with the final outcome feeling cheap as the characters react like they are huge revelations.

Also feeling a bit toothless are the choices contained in the game. Minecraft: Story Mode is a Telltale series after all, so you know you’ll be making a lot of choices throughout. However, here they feel even more inconsequential than normal, with many seeming to resolve themselves in the same way almost immediately. Players won’t find themselves stressing about which way to go, or what dialogue choice to make this time around. 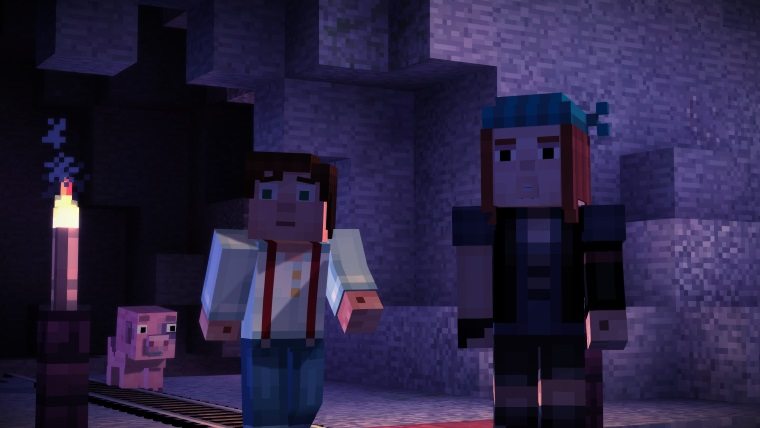 Speaking of dialogue, it seems like Minecraft: Story Mode won’t be featuring the long form discussions that Telltale has included in most of their other work. Speaking with other characters almost always results in a quick, one or two prompt exchange. Actual choices come about very rarely, and don’t seem to have much weight to them. It’s a shame, as Minecraft: Story Mode still offers up the same high quality voice acting that Telltale is known for.

With an all-star cast including Patton Oswalt, Ashley Johnson, and many more, Minecraft: Story Mode might have the most recognizable voice cast of any Telltale game. The actors perform up to expectations as well, making for an enjoyable experience throughout. One issue that did come up though, was the mixing of the dialogue, with characters talking over each other on occasion. Hopefully this was just a problem with this first episode though.

One thing that Minecraft: Story Mode actually surpasses its Telltale brethren in is the visual department. The Minecraft universe lends itself to hiding visual flaws, and allowing for lesser hardware to run the game. Minecraft: Story Mode uses this to great effect, hiding many of the issues that have come up with Telltale’s game engine as of late. The stuttery animation, and simpler visuals actually work well here, presenting something that looks better than its source material, while still retaining its charm. 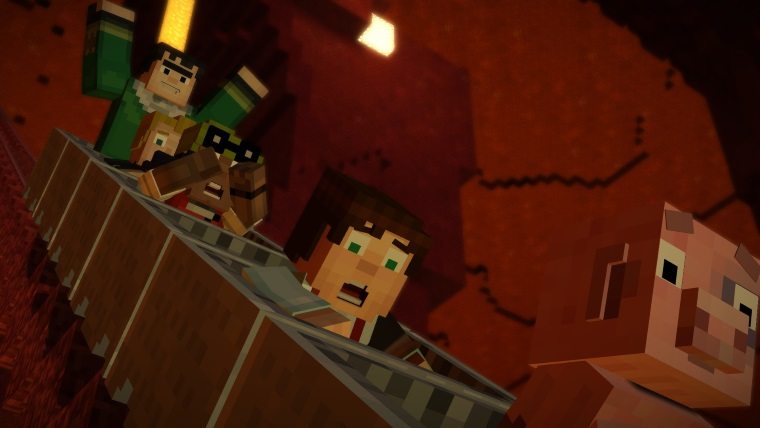 On top of this come the gameplay improvements we’ve seen in more recent Telltale episodes, with Minecraft: Story Mode even featuring entire sections of combat. You’ll fight off Zombies, Creepers, and Spiders by moving closer to them and swing your sword at the right time. Of course, these aren’t free roaming sections where you have to pull off complex moves, but it is a nice change of pace for the developer. Other areas still use the standard quick-time events that Telltale leans on so heavily, but they work well and add a sense of tension to the areas where they are used.

Minecraft: Story Mode gets off to a good, yet flawed start with Episode 1. Many of the fears that fans had before the series debut can be laid to rest, but some still linger. The story is very simplistic, with none of the drama or nuance of The Walking Dead or Tales from the Borderlands. Yet, if you are a part of the target audience, Minecraft: Story Mode will easily delight with its inside jokes and references to all things Minecraft. How the series will progress is fairly open at this point, but so far there isn’t anything to turn players away just yet.