The latest news in the world of video games at Attack of the Fanboy
December 24th, 2015 by Kyle Hanson 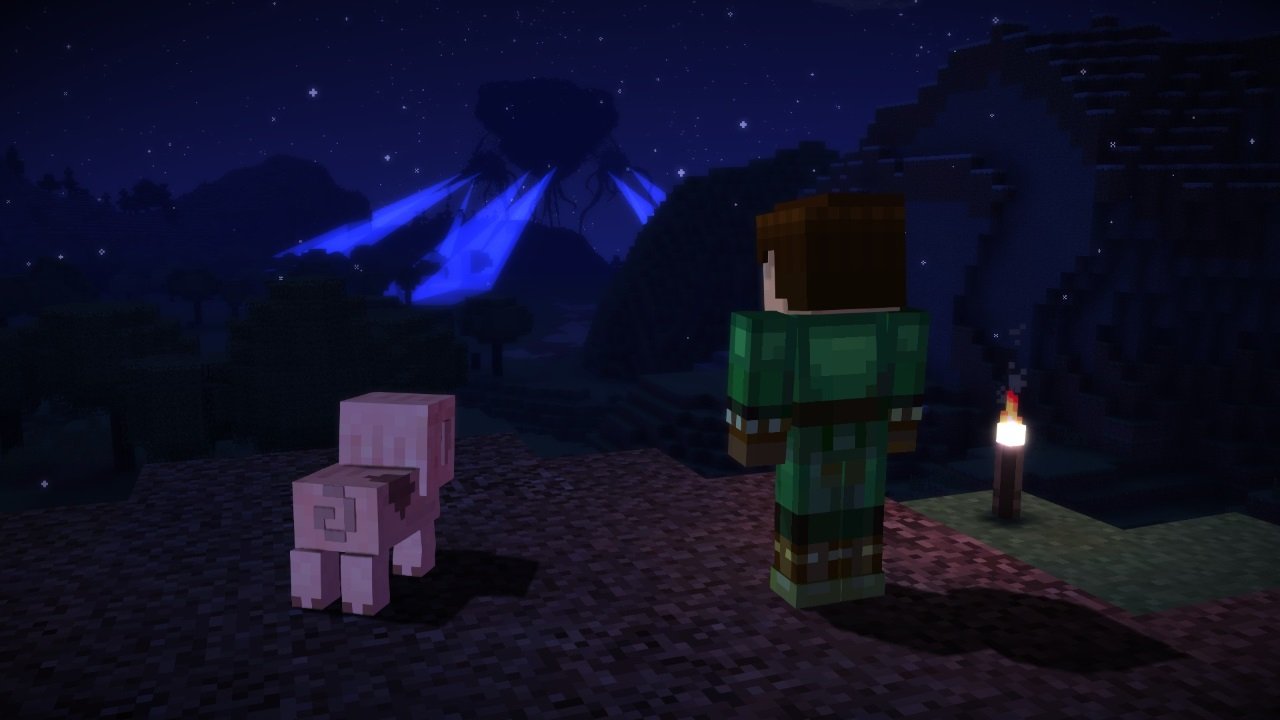 Minecraft: Story Mode heads into Episode 4 with a whole lot of momentum. After having gotten off to a rough start with Episodes 1 and 2, the third chapter in this series set things on the right course, giving the series a much needed shot in the arm. While Minecraft: Story Mode Epsiode 4 is the penultimate episode in the series, it is actually billed as the finale to the currently running storyline involving the Wither Storm. This faster paced story helps keep that momentum going from the last episode, resulting in another fantastic entry in what has become another Telltale great.

Minecraft: Story Mode is a classic sort of tale, with a group of friends coming together to try to save the world. The twist, of course, is that this world exists within Minecraft. The fundamentals of the game experience are all there, though it is treated as if blocks, crafting tables, Creepers, and all the other Minecraft elements are just normal things. Jesse and his band of friends have to defeat the dreaded Wither Storm before it consumes everything. To do this they enlist the help of the Order of the Stone, a group of adventurers that once defeated the Ender Dragon. 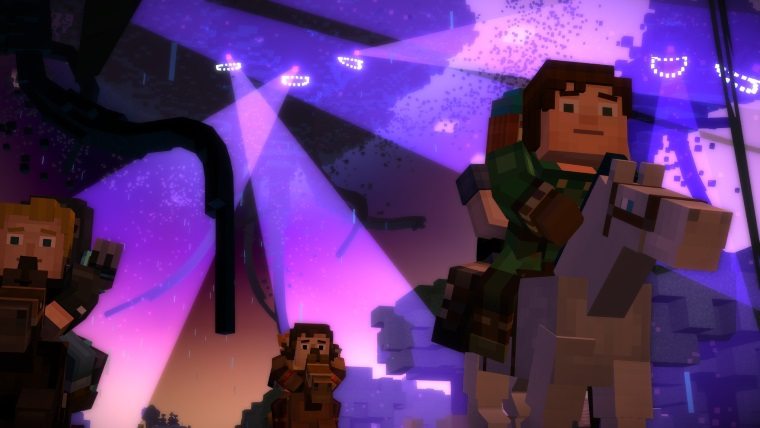 Episode 4 picks up immediately after the dramatic conclusion of the previous episode, with the Wither Storm still a definite threat. In fact, it has quickly become a much bigger problem, and our heroes have to quickly figure out a new plan of attack. Help comes, as it always does, but along the way players will be forced to make some tough choices, and even face some very difficult challenges. Eventually this story concludes, but how is up to you, and what is to come after is still very much an important question.

Minecraft: Story Mode’s biggest strength going into Episode 4 is its writing. The story of the Wither Storm comes to a raucous and enjoyable conclusion here, with everything wrapped up quite well, while leading the way for more adventures to come. After having dreaded the release of new episodes in this series before, I find myself now waiting on the next with bated breath.

Characters are always the star of any Telltale game, and while these aren’t the developer’s best, they will be remembered fondly by fans after this series concludes. This is, of course, also a consequence of the voice acting, which taps such talent as Patton Oswalt, Catherine Taber, Ashley Johnson, and John Hodgman. But those voices would be worthless without the intriguing and surprisingly emotional story that Telltale has crafted here.

Minecraft: Story Mode might have started out as a bit of a childish affair, and it is of course still aimed at an all ages market, but Telltale hasn’t held back from dipping into the more dramatic elements of the story. I actually found myself getting quite emotional at a few key moments in Episode 4, showing that it handles the balance between humor and drama quite effectively once again. 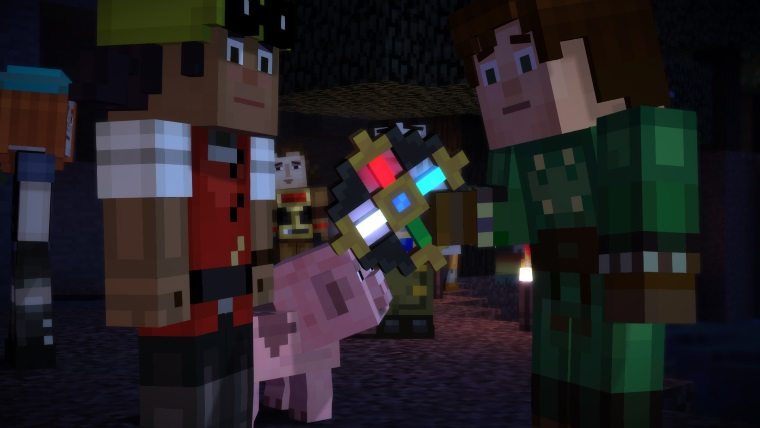 Unfortunately, while the good stuff is all back, and improved in many arenas, that doesn’t mean the bad stuff has totally gone away. Telltale is still working with a very old engine, and the results show quite a bit. There are animation problems throughout, with lip syncing getting out of whack on many occasions. One of the more egregious problems is with the audio, which can cut out mid-sentence sometimes, resulting in odd exchanges between characters, and a bit of lost information.

Also returning, and getting to be a slightly bigger problem, are the logical issues with placing a serious narrative within the world of Minecraft. If the universe in which this story took place was completely treated as a regular world with Minecraft elements sprinkled within it it would be one thing, but there are many callbacks to its video game nature. It isn’t really people playing a game of Minecraft, but it’s as close as it can be. The issue comes up when problems should be easily solved, but are treated as if they are life threatening, or difficult.

For example, our heroes stumble across a maze partway through this episode. Within the real world, a concrete maze is a difficult thing to get through, but within Minecraft you can quickly and easily break down walls, or build stairs to the top, and then more stairs to link the various walls, walking across them quite easily to the end. They also come across large crevasses at times and wonder at how they can get across, when earlier in the story the group built a bridge in less than a minute. These sorts of logical discrepancies won’t be noticed by the younger audience that Minecraft: Story Mode skews toward, but once you notice them they really break the immersion. 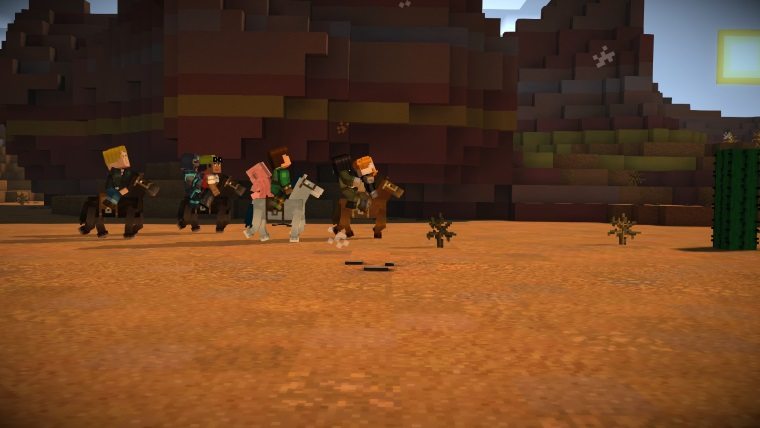 Luckily these problems are surrounded by a fun and enjoyable narrative experience, so they can be easily overlooked if you just want to have a good time. Minecraft: Story Mode still has a few problems that linger from its origins, but overall it has seen vast improvement during its four episode run.

The accelerated pace of the story within Minecraft: Story Mode has most definitely been a good thing. There just wasn’t enough material here to cover five episodes worth of content, while maintaining Telltale’s usual high level of quality. By shortening it to four episodes the developer really honed in on what was working in previous episodes, while cutting out what wasn’t. Now, with the whole experience complete, aside from the sequel starting Episode 5 of course, we can look back and see that this game easily lives up to the developer’s pedigree.