The latest news in the world of video games at Attack of the Fanboy
June 7th, 2016 by Kyle Hanson 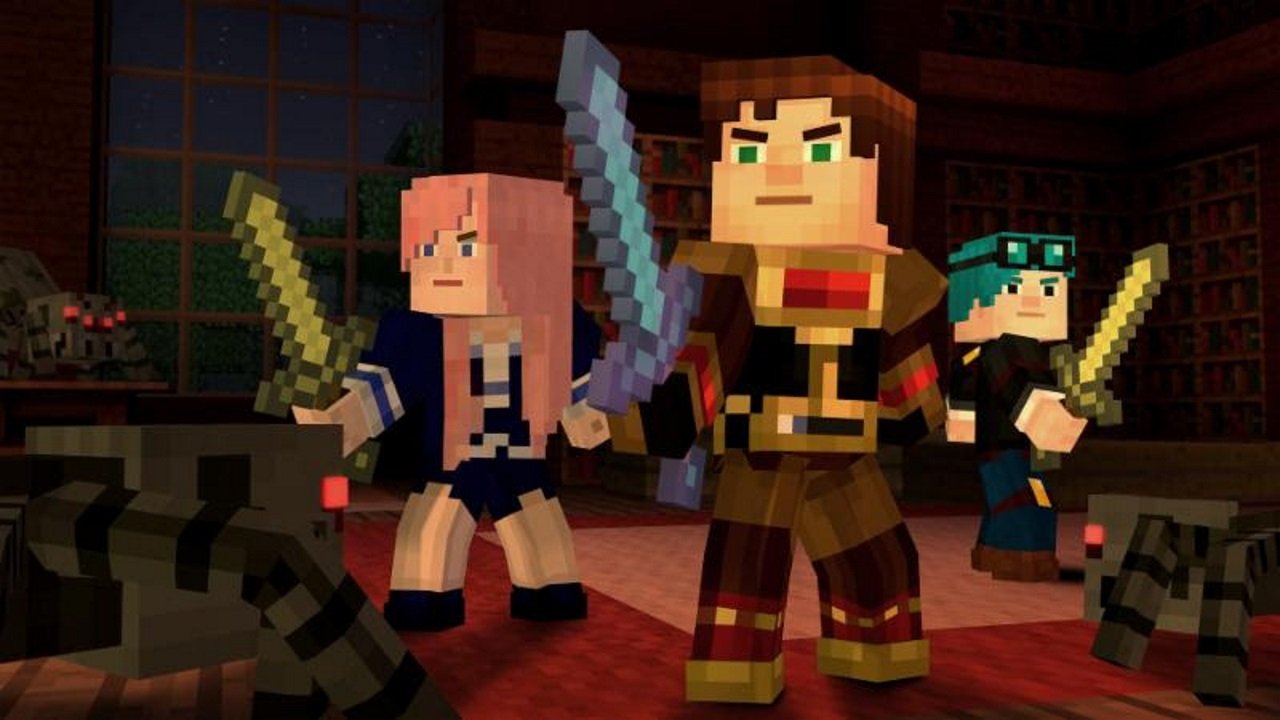 Minecraft: Story Mode Episode 6 kicks off the extended adventures of Jesse and his/her crew. The series has been nothing if not surprising, as it has turned the tables on the usual Telltale Games formula, presenting a four episode main arc, with a fifth episode to set the stage for the future. That future was pretty open, allowing for endless possibilities, and while A Portal to Mystery is a decent start, there are some very questionable decisions here that put the other two episodes to come in serious doubt.

After defeating the threat of the Wither Storm and becoming the true Order of the Stone, Jesse and his friends set out on another quest. Splitting off from a couple of their friends, Minecraft: Story Mode Episode 5 mainly focused in on four main characters. The conclusion set these four off on their own adventures, wandering through a portal into another world. Now they can visit many other worlds, with the ultimate goal of finding their way home. 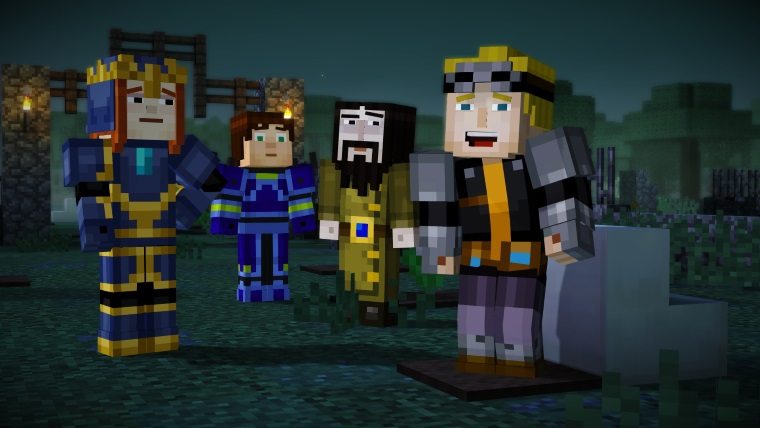 As Episode 6 begins we find our group once again lost in an unknown world. They are quickly attacked by a massive horde of zombies, leading them, ultimately, to a spooky house. There, our band of adventurers meet up with some very well-known faces, with Telltale pulling in some YouTube talent such as CaptainSparklez, Stampy Cat, and Stacy Plays. Together the entire group begins getting picked off by the mysterious White Pumpkin, who has set up various traps throughout the house. Can they survive the night and figure out who the White Pumpkin is in time?

What doesn’t really work are the YouTube stars, at least if you aren’t already a fan

This episode plays out very much like the old murder mysteries of the past. Characters are all locked in together and one of them might be a murderer. It’s all well-worn territory, but it is also done in a very lighthearted and fun way. Taking that formula and applying it to Minecraft is pretty interesting, and presents some unique moments, such as the way the traps work, and how the group investigates them.

What doesn’t really work are the YouTube stars, at least if you aren’t already a fan. They don’t fully play themselves, instead following the odd Minecraft: Story Mode formula of having characters who sort of act like this is a video game, but that it is still all very real. Even six episodes in this is still jarring, as it creates situations that don’t totally make sense, such as characters being trapped, when they can pretty easily build a way out.

Still, if you were able to get over that in the first five episodes, then you shouldn’t have a problem here. What might be a new problem are the YouTube stars themselves. They all put in a valiant effort, but these are definitely not professional voice actors, at least not of the caliber that you usually find in a Telltale game. They just don’t really fit in, with some of their voices sounding off throughout, and there’s just no way to take any storyline seriously when characters are named CaptainSparklez and TorqueDawg. Perhaps these should have been more of a cameo role, or they could have played characters that weren’t really themselves. 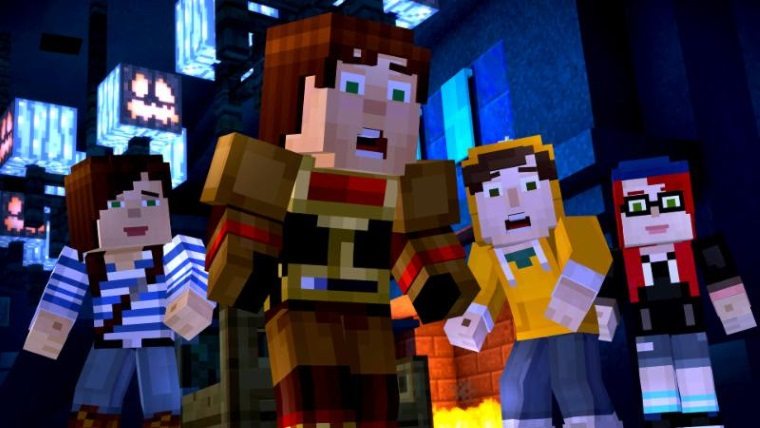 Of course, if you are a die hard fan of these entertainers then you’ll probably love every second that they are on screen. There was definite work put in to make each of these characters shine, with multiple catchphrases or personality quirks being worked into the story. If you don’t actively watch Minecraft Let’s Play videos on YouTube though then this whole thing might feel like a bit of a cash-in. It does feel that way many times, but there is still an engaging gaming experience within the off putting pieces.

Minecraft: Story Mode Episode 6 pulls back a bit on the action, instead focusing in on dialogue and the overall mystery. It can get a bit tedious at times, especially since there’s no major, world threatening event like in previous episodes, but the mystery might be enough to keep many players interested. You can’t fully put the pieces together by yourself, so you’re still kind of just checking boxes and making sure you keep progressing forward. Still, you do feel, at times, like you’re a Minecraft detective, figuring out who’s behind all the mayhem. And there are some genuine surprises here, with a lot of the usual murder mystery tropes mixed in with some unique Minecraft twists.

One thing that feels a bit missing from A Portal to Mystery is the dynamic between the four main characters. Most of the episode has the group splitting up for one reason or another. Some of the pairings work well, especially Jesse and Petra, but it’s tough to miss out on the characters that you’ve grown attached to through over ten hours of gameplay. After already cutting the cast by two, it felt odd to cut it further, even temporarily, while simultaneously introducing a bunch of new characters that non-fans might not even care about. 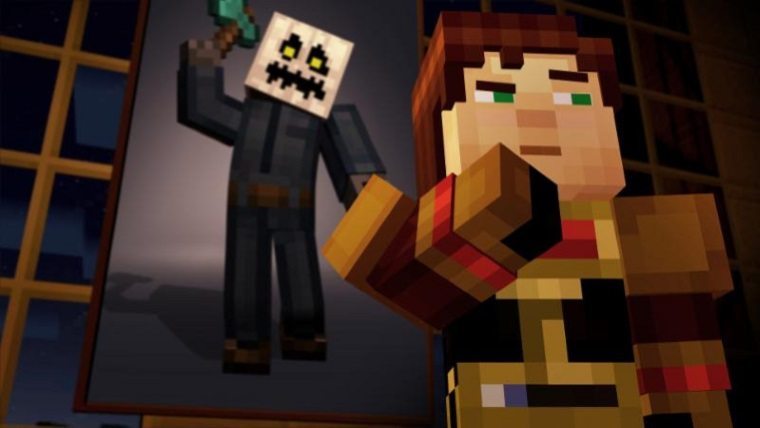 If there’s any good news it’s that the visual and audio presentation do hold up remarkably well. Telltale has been faltering significantly in these areas as of late, with an already outdated engine struggling to keep up with modern standards. Minecraft: Story Mode has been close to an exception, with better looking graphics thanks to the simplified art style, however it still suffered some severe animation and audio issues in its first few episodes. Episode 6 bucks this trend with a very stable presentation throughout.

Minecraft: Story Mode Episode 6 is a bit of a step back from what was a very promising stepping stone to the future. As the first in a series of three standalone adventures, the game is a bit disappointing in that it doesn’t offer up much that is all that fresh. Also, the choice to bring in YouTube talent will please the stars’ fans, but anyone else will just find some of their quirks annoying, and their voice acting sub-par compared to the usual stellar performances that Telltale gives us. If you enjoyed the first five episodes then there’s something here for you, but the bar has certainly not been raised, and expectations for the next two episodes are actually a bit lower than before.

Minecraft Minecraft: Story Mode Telltale Games
You May Like