The latest news in the world of video games at Attack of the Fanboy
December 14th, 2014 by William Schwartz The Mount & Blade series first hit the scene back in 2008 and while it wasn’t particularly visually appealing, the kind of gameplay it brought to the table wowed the critics with its open-world sandbox that allowed you to head your own group of men, which could number up to the hundreds, and fight together with them on the battlefields as your own playable character. Some fun, extra side RPG-esque stuff was the cherry on the top. Then came Warband in 2010 where all the RPG-esque stuff got expanded to the point where you could marry ladies and create your very own kingdom. It was a very impressive jump with a lot of new features that made the game all that much more fun and enjoyable. The new features that the Viking Conquest DLC brings just completely blows it out of the water.

If the original Warband’s jump was equal to your highschool varsity champion’s long jump, Viking Conquest is Mike Powell’s. The visuals are heads and shoulders better. Gameplay has been further expanded to allow ship travel and all the goodies that come off of that. A whole new world, one that is historical and real, with a whole new story aspect to play through that helps you learn and explore the admittedly less diverse, but interesting world. In fact if you were just reading about the new features, you would probably think it’s all pretty swell. Sound’s perfect right?

Well… Not quite. The following screen is the opening screen you see when you start a new adventure, explaining to you the setting in perfectly legible English. 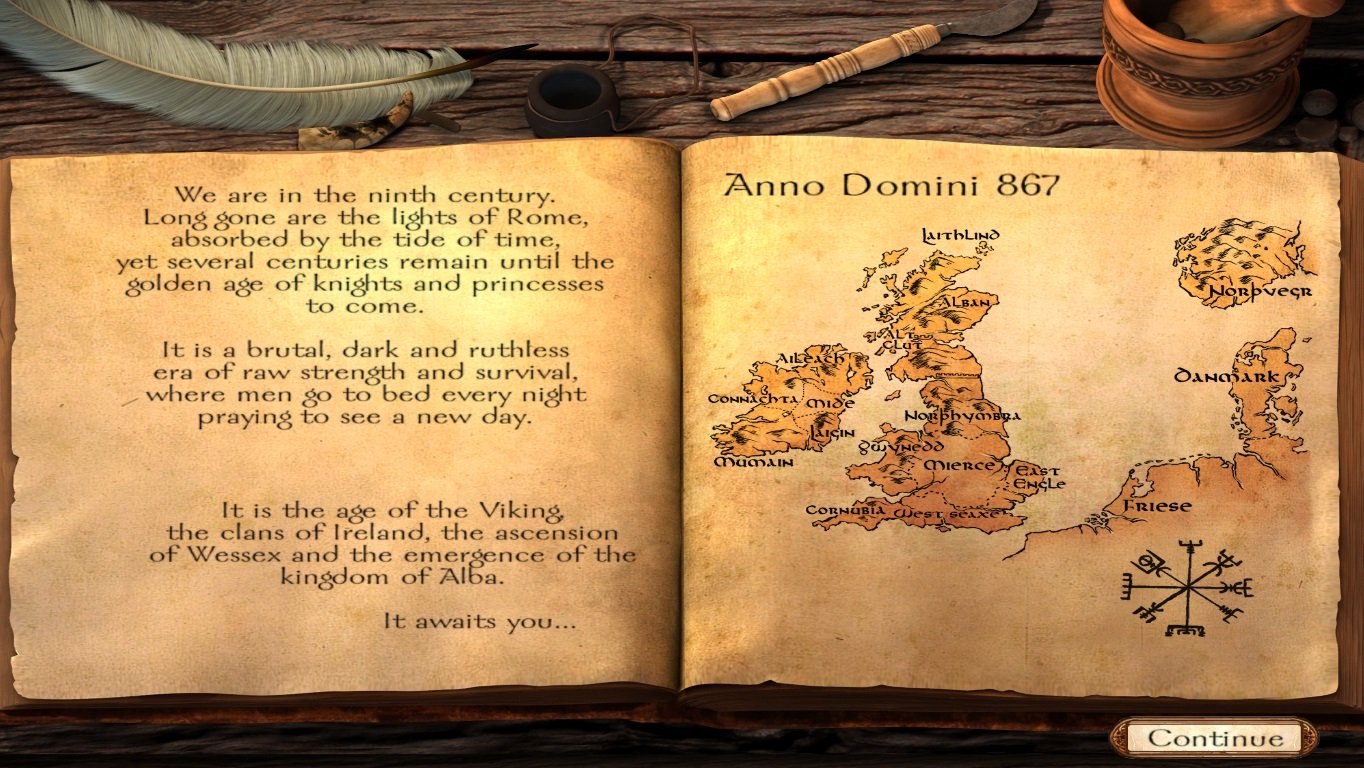 Looks pretty ordinary, if not a bit boring, right? And yes, if you were not aware, Mount & Blade Warband: Viking Conquest is set in the 9th century, the peak of the Vikings during the dark ages of European history. The game map itself consists of the British Isles, Denmark, Norway and Frisia, the modern day coasts of Germany and the Netherlands. The game attempts to incorporate as much historical realism as possible. This doesn’t just mean the maps and locations of towns and cities and the type of items, weapons and armor you will find merchants selling, but also the names of these places and objects as well as the names of the people like this guy: 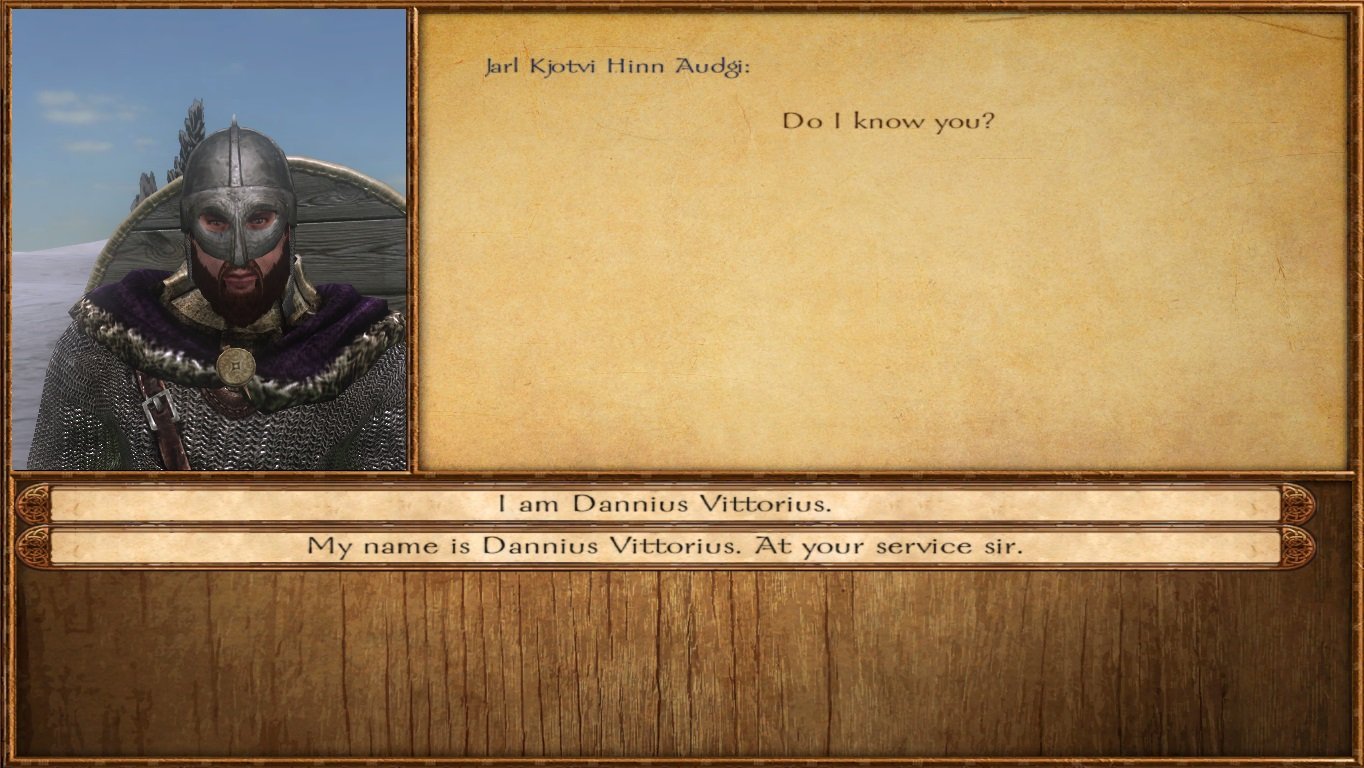 And that’s a pretty tame and acceptable example. For example, it’s totally possible to get a “send a message mission,” a very common mission given to you by lords, that would look something like “Send a message from Guledic Meurig map Arthfael of the Kingdom of Glywyssing to Tiarna Finshnechta mac Maele Corcrai of the Kingdom of Connachta who was last seen near Luighne Connacht.” What in the hell, right? 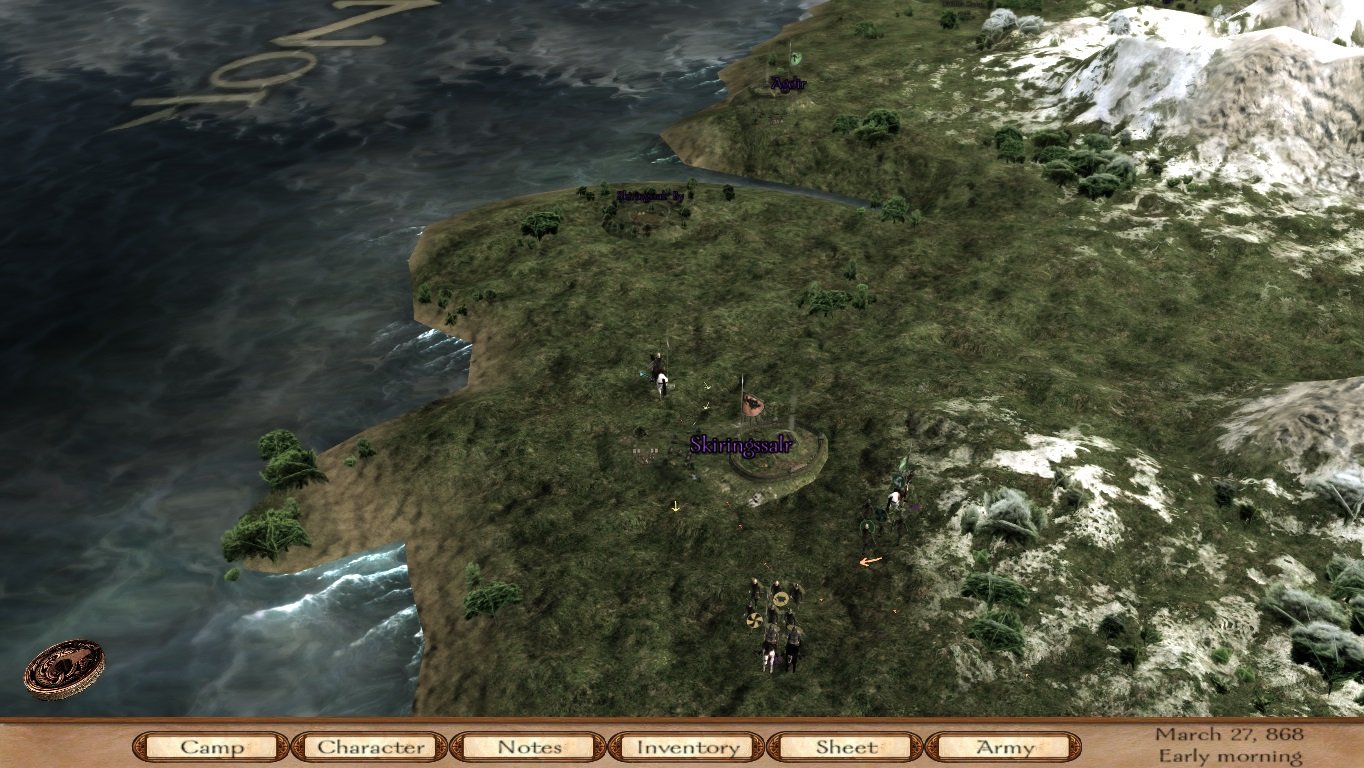 But perhaps you aren’t fazed with being a vassal, or lord, of people whose names you cannot remember or pronounce, and watching over lands and towns whose names you also can’t pronounce. Or perhaps you can and I’m just dyslexic with historical names and sometimes history is just silly like that anyway. Seeing past the seemingly random jumble of vowels and consonants, you will find that Viking Conquest looks really nice, or at least a lot nicer than the vanilla version. The world map is textured well and pretty detailed with better water graphics. Representations of parties on the map increase in number of men to help give a visual indication of how large it is.

There are also the additions of being able see troop trees in-game, so it was easier to plan out how you wanted to upgrade your troops to get the desirable troop make-up. Having your own refuge is also a cool addition as a pseudo-castle and place where you can keep extra troops for those of you who don’t wish to become a vassal of any old king, but still want to reap the benefits of having a steady place to call home (and for storing items and the like). Now, when you enter a town, castle or city, you will get to view it in all its glory as you decide which menu option you would like to partake in. This is a much more aesthetically pleasing solution to the boring parchment drawing of the vanilla Mount & Blade games. Cities and villages are now much more vibrant looking with some villagers doing actual things like farming and weaving as opposed to aimlessly milling about, although there are still the wanderers of course. There are children running about and the cities are just generally pretty large. All the additions are merely aesthetic, however, and making the city larger is actually problematic when you try to find specific individuals for quest objectives, which can be pretty frustrating. 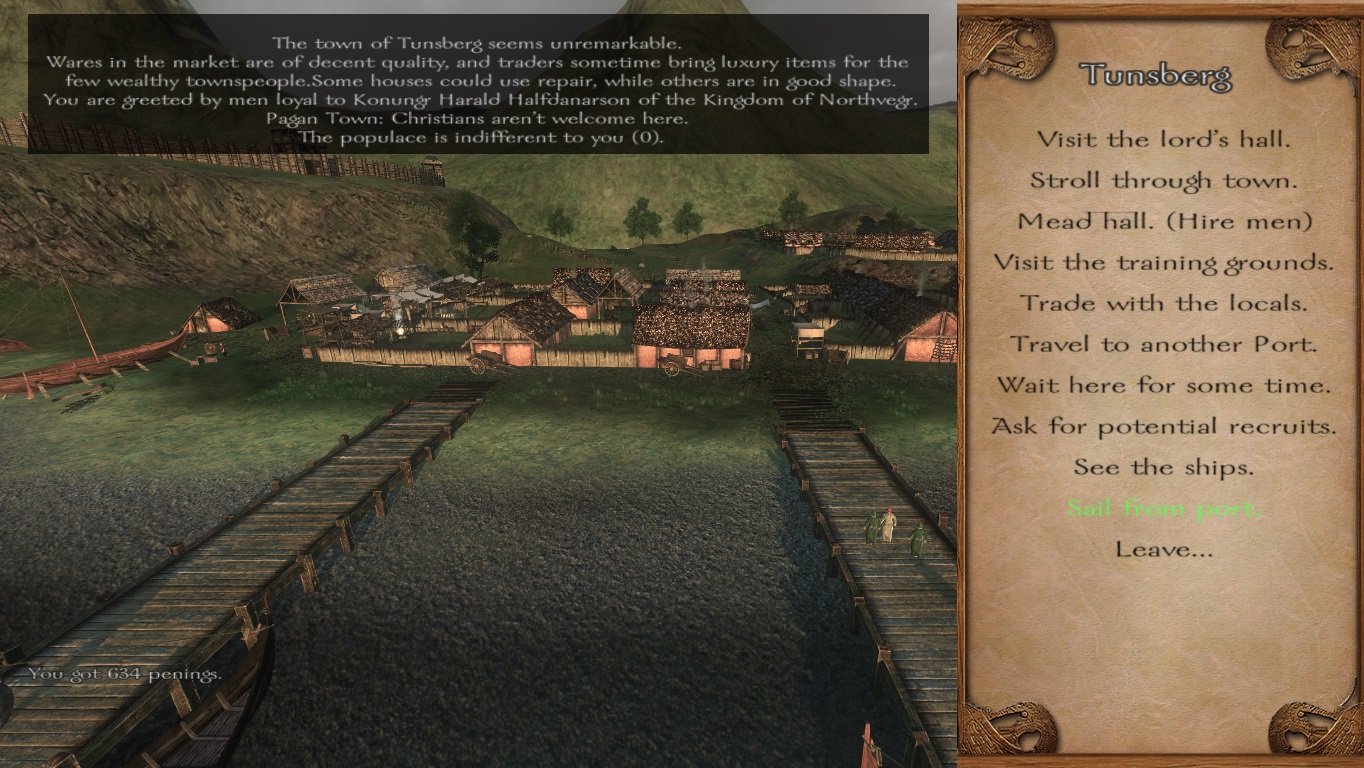 The pace of Viking Conquest is now much slower than the original Mount & Blade Warband. This is both good and bad. Good in the sense that it was a little ridiculous that you could be able to turn a band of peasants into a company of knights in a matter of days with a fair, but relatively small, investment into your party’s training skill. Bad in the sense that it now seems that even with a heavy investment into training skill, your troops will rarely ever be upgradeable, leaving you with an extremely squishy and ineffective fighting force for long periods of time. It also makes losing your force in defeats all that much more penalizing and harder to recover from.

It is, however, a much more realistic and different experience as you get to feel being a relatively small band of wanderers for much longer than you used to, an uncommon experience among veterans Mount & Bladers who quickly became NPC rofl-stompers within the first gameplay month of the vanilla version of the game, as lords and kings tended to have armies in the hundreds to your measly two-digit parties, which really ups the importance of the much more expensive mercenaries that you will find hanging about in the mead halls of major towns. 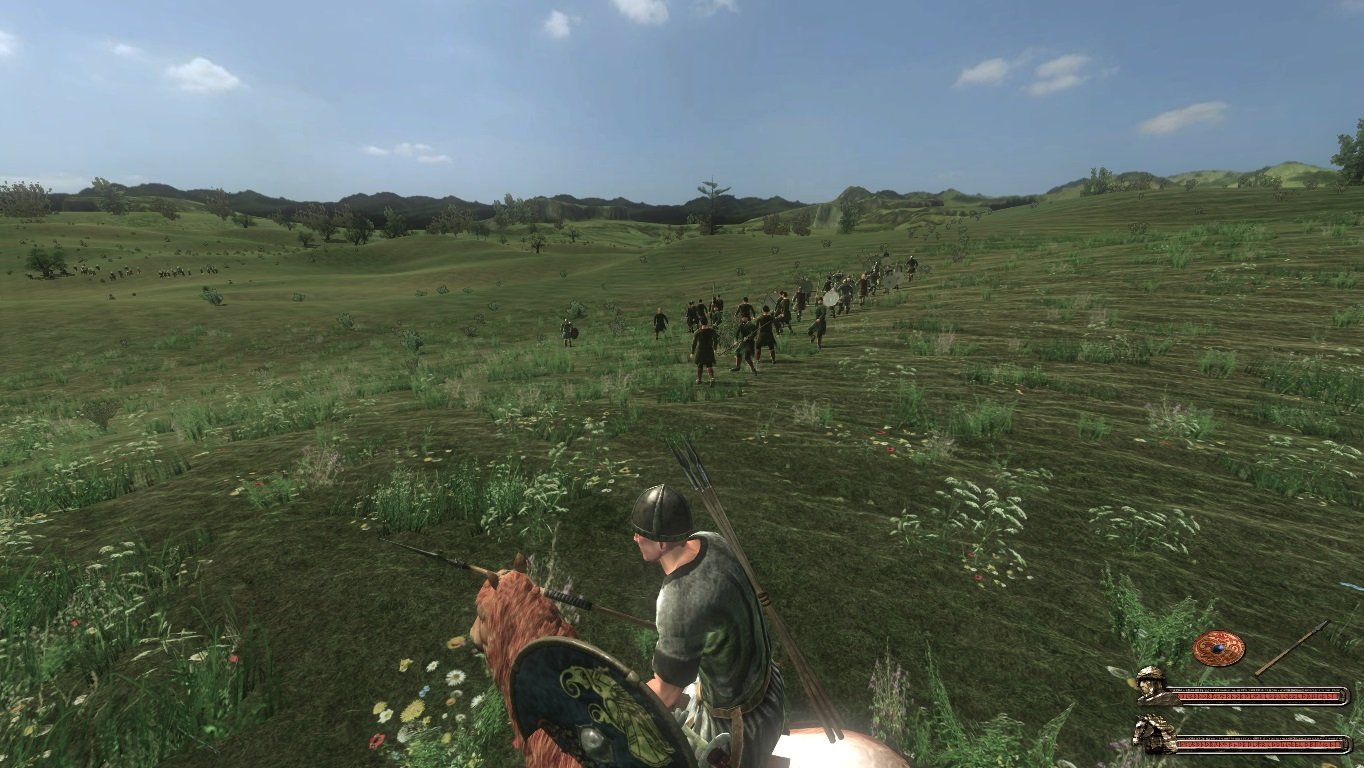 The size of your army will also be severely throttled throughout the game, not just by your attributes, but also by the capacity of your ships. While you may have a hard limit of 100 men in your party due to a certain calculation factoring in your charisma, leadership and renown stats, if your ship can only hold 27 men, unless you don’t plan on doing any sailing soon, you’re going to need to keep the size of your party down to 27 because ships are prohibitively expensive, as they should be. 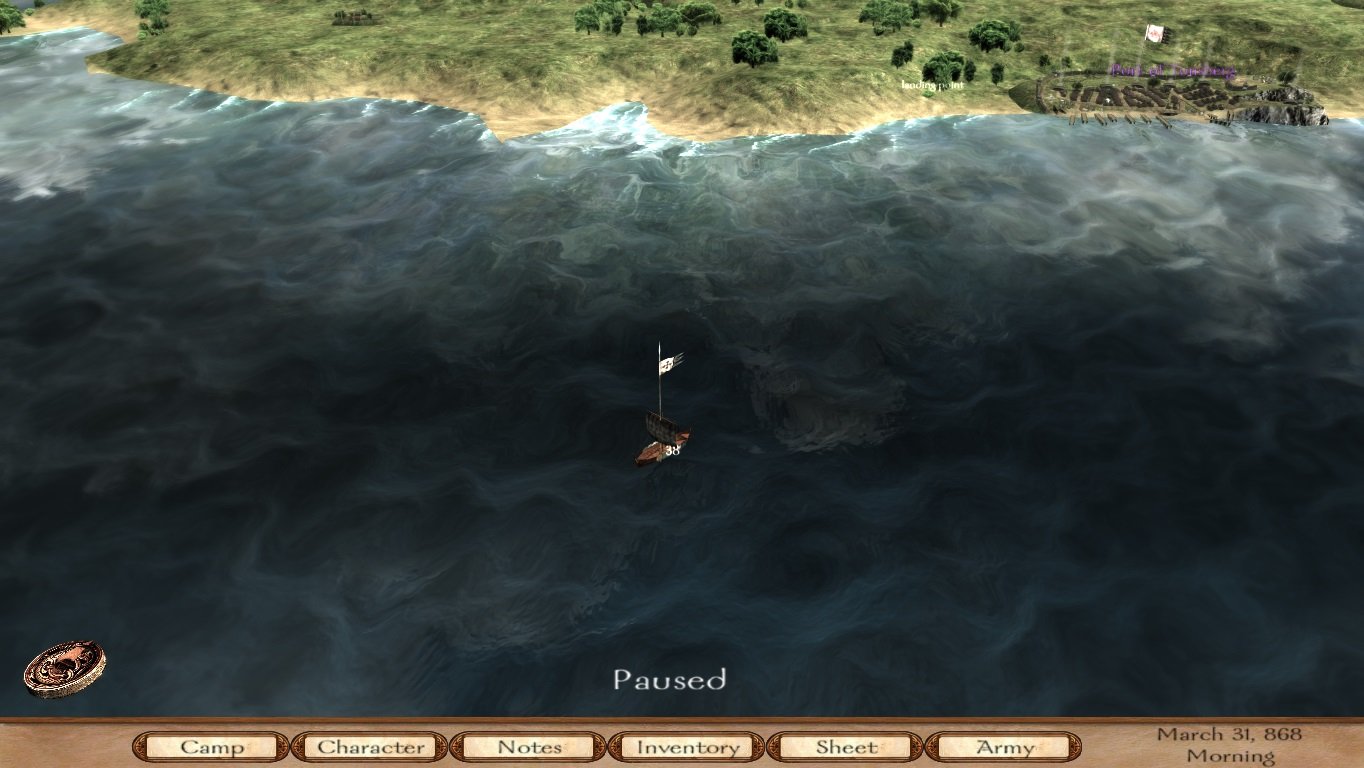 Sea travel is a pretty nifty new addition to the Mount & Blade series, assuming you don’t use mods and have experienced it there. Unfortunately, the game has insane frame-rate drops whenever you switch to sailing on the world map. There is also a distinct lack of strategy associated with sea battles as I have yet to find, in the mess of menus and buttons that is the Viking Conquest user interface, a place where I could determine which of my men were to be placed on which ship during battle, which would have been useful for making one ship wholly dedicated to ranged combat and the other for up-close and personal fighting.

Sea battles themselves are quite enjoyable as you get to control your ship, which is always good fun. Alas, sea battles tend to be a rarity unless you decide to be a raider of traders, which while in the short run may be slightly profitable, you will find that in the long run, with party morale dropping because they start to realize that they are the bad guys and whole kingdoms hating your guts, you will lose friends fast and without friends, you will have a very bad time indeed. The problems are compounded by the general lack of populace in the game world. Whilst in the original Mount & Blade Warband you could find hordes of bandits, farmers and traders roaming the land, taking advantage of roads and traveling around, Northern Europe is surprisingly sparse. Rarely would you see the odd farmer scurrying from one village to the other. Sometimes you see the odd fishing boat, but on such a very big map, the rarity  of NPC parties make your playthroughs a very lonely, and less action-packed, one indeed.

At this point, while I’m making conjectures based off of my observations, it doesn’t seem as if the Mount & Blade AI has been adapted to take full advantage of the new features in Viking Conquest. I’ve hardly seen lords take to the sea and have never seen whole Viking armies do so, leaving lonely kingdoms, like Frisia, Norway and Danmark, running what appear to be isolationist policies, even if on paper, they were at war with other countries.

It isn’t just game world AI, however, as the battle AI has its own weird tics. Many a time I would find a few enemy troops just standing in a river, refusing to move whilst the rest of their peers had charged at my army and died. Other times, I would find that my own troops would refuse to follow my orders, such as the simple “follow me,” which one can imagine being a source of great frustration. 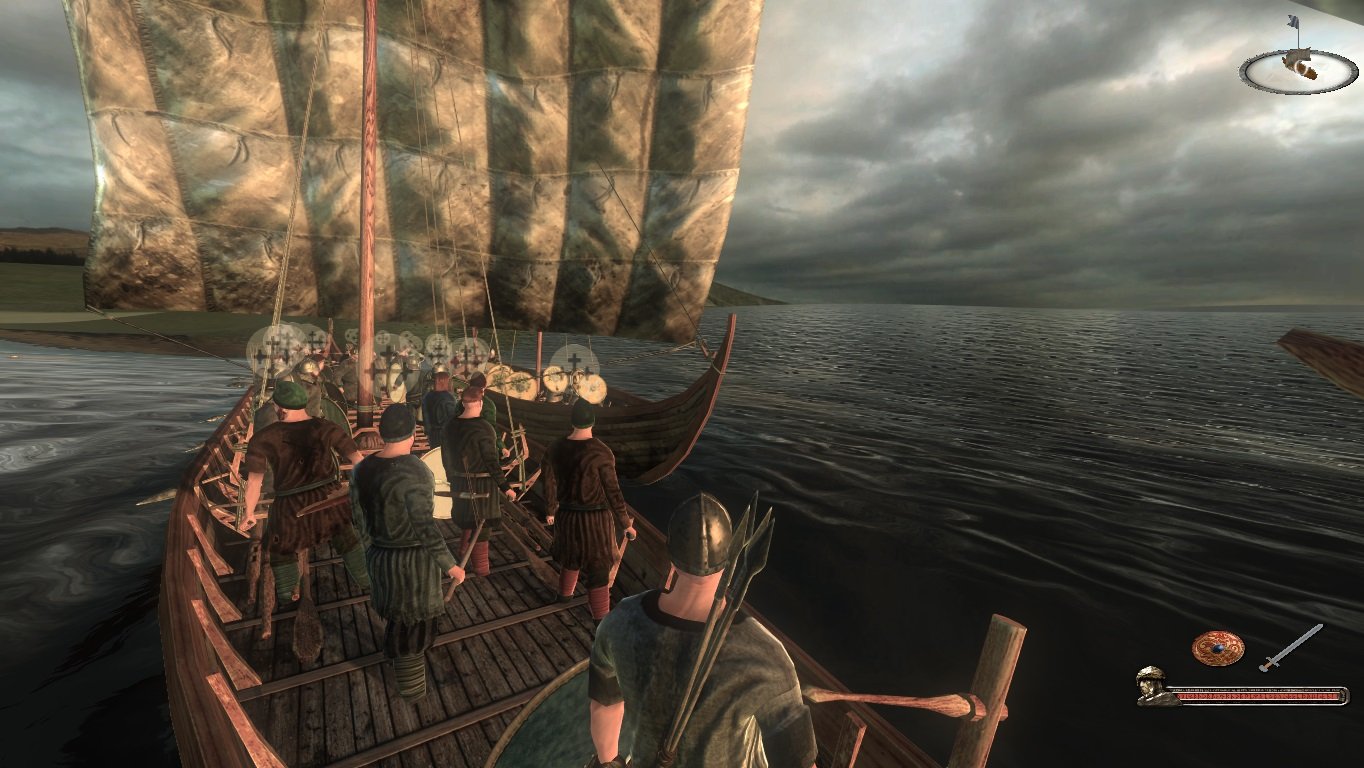 The issues don’t end behind-the-scenes however as, while the game is still quite visually appealing, sometimes objects appear far too glossy and reflective. I once stood next to a huskarl who was standing next to a fire and his chainmail armor shone like it was the sun itself. He obviously looked unfazed by this turn of events, but with the frequent clipping of objects through each other and random blinking light sources in the world map, immersion is easily broken by visual bugs.

It also didn’t particularly help that Viking Conquest crashed frequently and that auto-save didn’t seem to work, leaving you at the whim of your memory and habit to quick save. Another immersion breaking bug I found was getting deemed an outlaw in a country due to story events, yet simultaneously receiving mercenary paychecks every week from said kingdom because of actions I did outside of the story missions. Other small bugs like this exist aplenty and need fixing.

Viking Conquest has the general outline of features and ideas held down that, theoretically, would make a fantastic and enjoyable game. Unfortunately, due to either engine limitations or poor coding, it doesn’t all quite fit together all that well. Hopefully with updates and patches, the game will be as great as promised, but as of right now, while still somewhat playable and enjoyable, it is far from the epic adventure it ought to be.

Viking Conquest is the final culmination of every development made over the years, mod and official, in Mount & Blade Warband. It makes full use of a 4 year old game engine, which itself was a modified version of an engine 2 years older, turning an originally fun game into even more fun, immersion and stunning enjoyment. Unfortunately, a large host of bugs and stability issues spoil the show and cannot be ignored. However, assuming they can get them patched out, Mount & Blade Warband: Viking Conquest is a fitting send out to this venerable chapter in the Mount & Blade series as we wait in anticipation for Mount & Blade 2: Bannerlords.