The latest news in the world of video games at Attack of the Fanboy
October 3rd, 2014 by Anthony Decicco 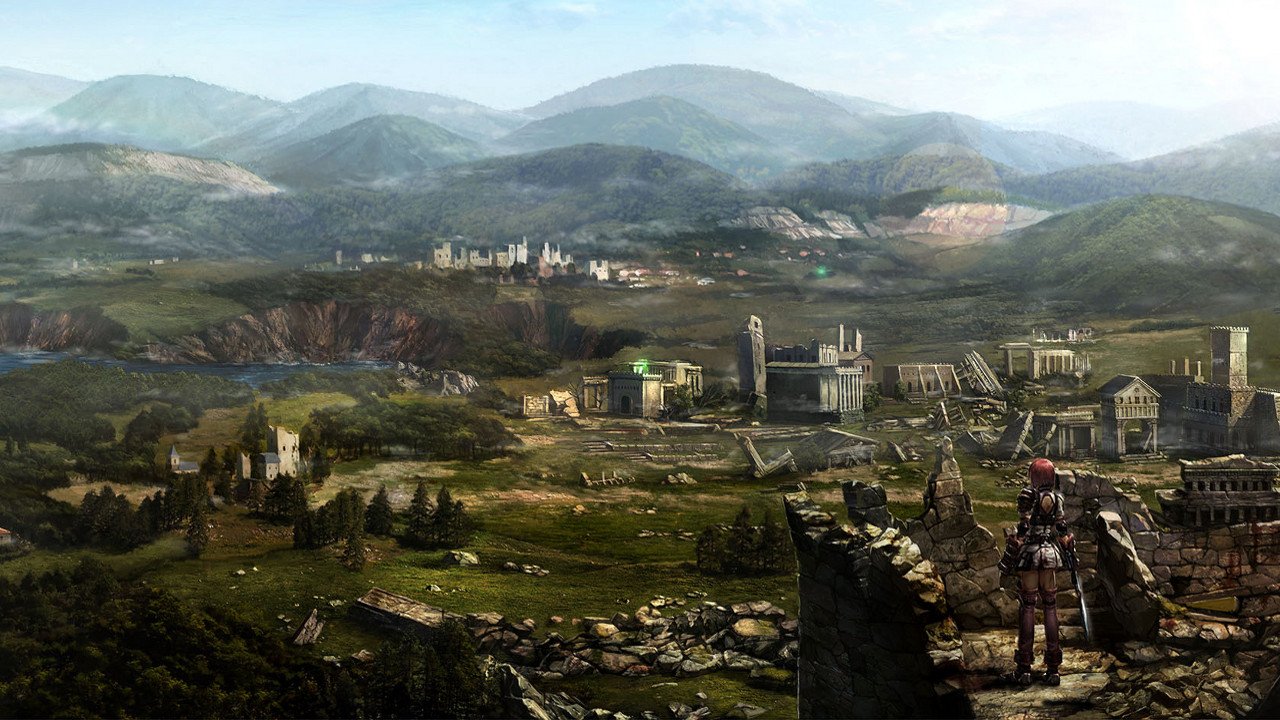 Natural Doctrine is a mixture of JRPG and strategy RPG, but without the over the top elements of some titles and more grounded with traditional role-playing game standards. It is also one of the most painfully difficult games I have ever played reinforcing the reputation it has received since its Japanese launch. The game is the first title fully developed by Kadokawa Games and while it is a good freshman effort, it ends up feeling painfully flawed.

The story of Natural Doctrine is rather lackluster, throwing you into the fray immediately and holding your hand with a few good tutorials. Be sure to pay attention to these, because if you don’t you will regret it later. The tale is of a warrior, Geoff who sets out looking to clear out goblin dens in search of pluton, which is a resource that is important to humankind and the fortress city of Feste. Along his journey he meets new friends who soon become his allies in the battle against creatures that live below the surface and look to destroy the city of Feste. The plot is rather straightforward and aside from the odd scene here and there on the world map, the story acts as an afterthought.

The combat system allows you to control each character individually every turn, and the turn order is at the top of the screen. The screen itself feels cluttered during combat and in dungeons. There’s the turn order, the ability bar, and a tips ticker that constantly moves across the bottom of the screen by default. This is all before any battling has taken place, once it does a ‘play by play’ log will appear on the left in between everything else in red text to signify landed attacks, but thankfully this can be switched off via a button press. During the combat process you can fit up to four players in one area. Each room in the dungeon/map is occupied by a few area squares of either blue (neutral), red (enemy), or green (escape). Red areas cannot be entered by the player until all the enemies inside have been dealt with. Each character has their own ability and specifications, either gunslinger, healer, warrior or mage. The only character able to wield multiple arrays of weaponry is Geoff who can switch from swordsman to gunslinger on the fly. Pluton plays a role in combat as mages and any of the classes that use magic based abilities use it to power them, sort of like mana. To keep track of your pluton there is a gauge in the top right telling you how much you have and each ability tells you how much it uses. You can earn more through the game and by defeating enemies. 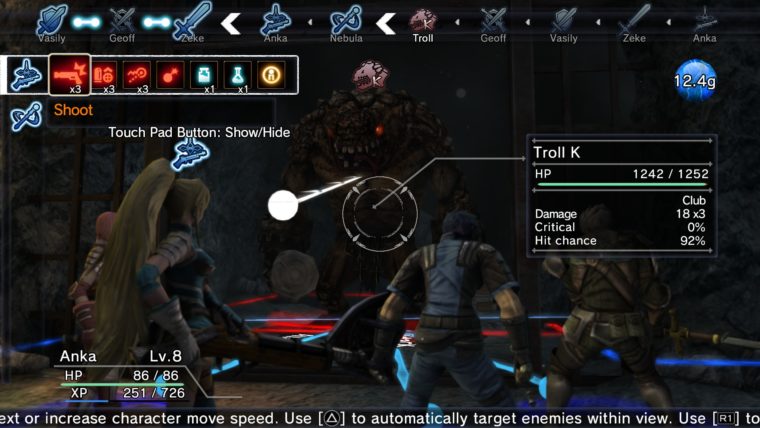 The strategic element of Natural Doctrine is to plan your advancement without leaving openings for any of your party members to get barraged, especially those with low health like mages and healers. In the tutorial it shows that you can place someone with a shield (Geoff in this case) and have them put up a powerful guard while your long range medic/gunslinger stands behind them taking pot shots. Sure, this is all well and good at first, but as the game progresses and you are thrown down more tight corridors, it leaves no room for experimentation. You simply have to pray that either the enemy misses, or doesn’t throw a bomb around a corner causing you to explode and die, which happens far too often. The real kicker here is that even though you have medics and mages, none of your party is allowed to die at all. If one of them dies it is game over and you either have to go to the last checkpoint, which are few and far between, or restart the entire level, going back to the drawing board to decide how to approach the same thin corridor. The only areas that I actually found enjoyable were the ones taking place either outside, or in open areas. I had one incident, where you neededto have a character in the area next to the door to open it, and on the other side is a chest being guarded by a large enemy. I figured, “Okay, cool. I open it and run away and he comes out and we kill him.” What actually happened was far sadder. I opened the door, and was totally unable to move. The enemy opened fire with area of effect attacks, so everyone in that square got hit for massive damage. Unfortunately, after opening the door, your turn is pushed to the end, so long story short, I died because of either poor planning or the trial and error way the game is set up.

The only areas that I actually found enjoyable were the ones taking place either outside, or in open areas.

The array of enhancements available for each character shows that a lot of effort was put into the character development with skill tress that you can access at the map screen. Skill points are gained by leveling up during dungeons, but cannot be used until you are finished and at the world map. There is no easy way to leave dungeons either, one way in and one way out. Unless you quit back to the world map and reload your save. This is compounded by the fact that in-mission checkpoints are hard to come by.

An online component is not usually present in many JPRG titles so it is a welcome addition in Natural Doctrine.  The focus of this mode is something that sets it apart from the rest of the game. The online component acts as a collectible card game, with an ever evolving deck the player will create using cards they can acquire via packs purchased with in-game currency which is given to them daily. The formation of decks is rather confusing at first if you don’t know what to do. Essentially, players are given the cards and each deck can only have a set weight of pluton. Each card takes up a certain weight of pluton to use it and each deck can consist of a pair of four cards, totaling eight cards per deck. On top of this, the total card cost cannot exceed 40 for an entire deck. If you end up choosing higher, more powerful cards you may end up with only four to five total cards in your deck, so it becomes a real numbers game. Players can create up to ten different decks and each is ranked by an alphabetical grade from E-A. 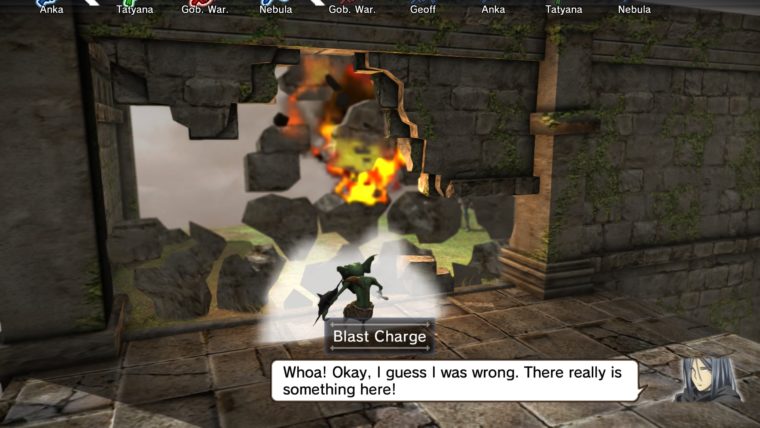 Once players finally have their deck in working and satisfactory order they can go online by creating a room or quick match. The two available game types are versus and co-op; versus simply pits your deck against a random player’s, while co-op is where you have to completely wipe the map of enemies using you and your partner’s decks. The online gameplay is fairly solid, but also quite complicated. The community is also pretty desolate making it best enjoyed with friends, so only venture in if you plan on having a few people join you.

Natural Doctrine is far from a ‘bad game’, it has great ideas but it seems to be struggling as it virtually always sticks you in compact situations where strategy goes out the window and luck plays a far too important role. The maps tend to funnel your party into corridors where ninety percent of the time the only outcome is death meaning many will find themselves constantly restarting. Even with the various difficulty options Natural Doctrine can be a chore to get through, and the story, albeit interesting, is nothing that furthers the genre. If you love difficult titles, specifically JRPG ones, and aren’t afraid of breaking your controller, then give Natural Doctrine a try. If not, you might want to hold off until a better option comes along.