As rough and enticing as Enoch itself

People Can Fly has a background in gritty, gory, and over-the-top shooters. It’s a history that began with Painkiller and led to Gears of War: Judgment and Bulletstorm. Now the team is leveraging their experience to craft a cooperative looter shooter with Outriders. The end result is … mixed. In many ways, People Can Fly flexes their strengths and delivers an enjoyable, superpowered third-person shooter. That said, there are several ways in which Outriders works against itself, lessening the value of joy found in certain instances. Opinions will undoubtedly be divided on this game.

Outriders envisions a future where Earth is no longer viable for human habitation. The only option is to traverse the vastness of space in hopes of settling on Enoch, a planet positioned as humanity’s saving grace. As fate would have it, the alien planet is far from peaceful. The vision of Earth 2.0 quickly fades from view as a violent storm, referred to as the Anomaly, rips through the interplanetary colonists.

One of these individuals, a combat proficient Outrider, survives the environmental energy event, albeit wounded. But the wounds aren’t the only thing left behind by the incident; the survivor has now become Altered, humans imbued with power by the Anomaly. Before the newfound powers can be adequately explored and enjoyed, the Outrider-turned-Altered is placed in cryostasis. 30 years pass by before they reawaken and the already foreign world manages to be even more unfamiliar (and desperate) upon return. The journey to understand the Anomaly, uncover the signal behind it, and combat every hostile force, human and alien alike, standing in the way starts here. 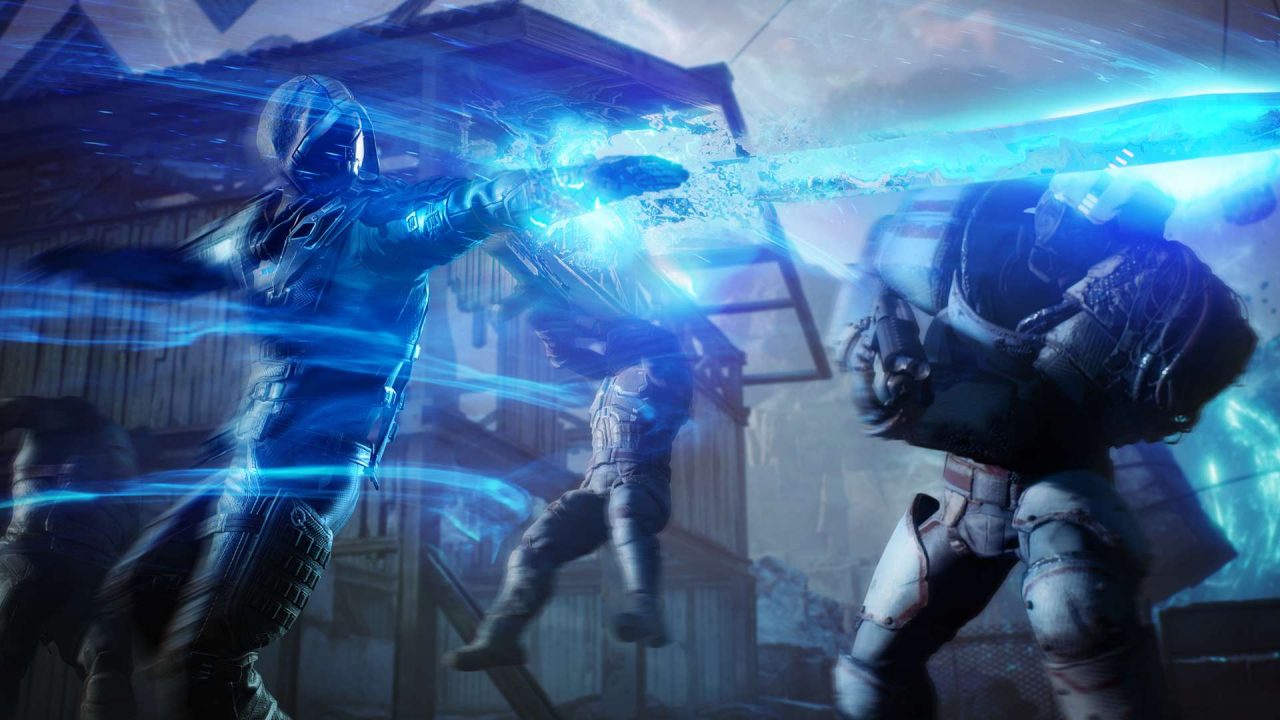 The concept itself is engaging, but Outriders’ opening moments give a poor first impression. The introductory cast of characters being churned through the proverbial grinder are as flat as they are foul-mouthed. Sure, I’d be grumpy, too, if I put all of my eggs in Enoch’s basket and that basket turned out to be on fire. But the writing for the characters fails to hit the mark as the game is throwing a slew of foundational events at the player before any reason to care has been established. All that is seen is a bunch of assholes reluctantly working with other assholes, all while trying to kill or avoid being killed by different assholes. That about sums up the variety of personalities inhabiting Enoch. The softer centers of our grimy, battle-hardened cast aren’t glimpsed until several hours later. And that’s about the same point that the story improves, even if the dialogue doesn’t always support it properly.

The environments fare a bit better. Although not immediately apparent in the first few hours, Enoch is home to beautiful and varied landscapes. Over the course of the campaign, which clocks in around 25 hours with side quests, the player will traverse snow-covered volcanoes, ancient forest ruins, and much more. It’s a shame that the map design is largely restrictive, with areas comprised of connecting corridors. I often found myself staring beyond the confines of the map at the beautiful backdrops fleshing out the world. And they were entrancing sights to behold. The linearity of the level design can be off-putting at first, but eventually a rhythm is found.

You see, while we have talked about the Syfy™ quality script and semi-restrictive level design, neither are the reasons players will find themselves coming back for more. Outriders is all about looting, shooting, and liberal use of powerful skills. People Can Fly have cherry-picked aspects of Destiny and Diablo in developing this title, which is NOT a live service. What we have here is a complete product, at least in terms of content. No battle passes, seasons, and so on are begging you to log in daily or risk missing out on rewards or story bits. 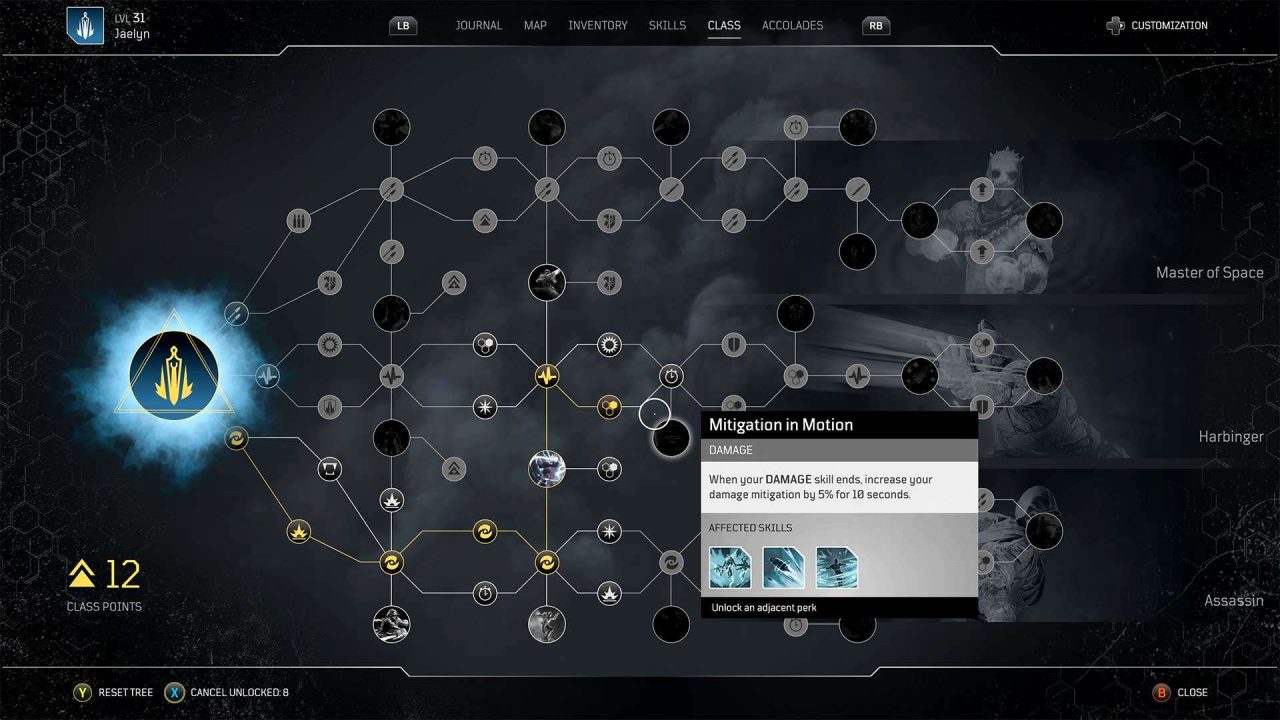 Outriders goes all in on its four distinct classes — Devastator, Trickster, Pyromancer, and Technomancer — combined with heavily modifiable weapons and deep skill trees. The classes steadily gain access to new powers, three of which can be equipped at a time. The Trickster is a master of space and time, disrupting both as it teleports across the battlefield and creates temporal fields. The Devastator, on the other hand, rips the rock from the ground to encase itself in protective armor or impale its enemies. The powers may not reach the levels of insanity found in the developer’s previous work, Bulletstorm, but they are wild nonetheless.

Coupled with the slew of shotguns, revolvers, LMGs, assault rifles, sniper rifles, etc. dropping with each encounter and popping out of every chest, it’s easy to get sucked into the power fantasy People Can Fly have presented. The constant showering of loot means there are always materials and mods to strip from the items that don’t suit the targeted playstyle. A generous crafting system allows the most basic looking weapons to suddenly mirror Mjolnir, bolting enemies with lightning when achieving critical hits. Outriders is firing on all cylinders in those moments where carefully selected skills are synergizing with collected weapon mods to produce insane effects and shred enemy health bars in an instant.

Eventually, enemies will be the ones doing the shredding and you won’t find a health kit in sight. Outriders may feel like a title developed for the PS3 and Xbox 360 era at times, but it is actually forward-thinking in its approach to combat and health. Instead of breaking from the action to hunt down health packs or idly sit behind cover as health regenerates, Outriders awards health for being aggressive. There is a (janky) cover system, but it is hardly used (thankfully). Each class receives health for killing enemies within certain ranges or dealing damage in general. It’s a bold shift from shooter norms. 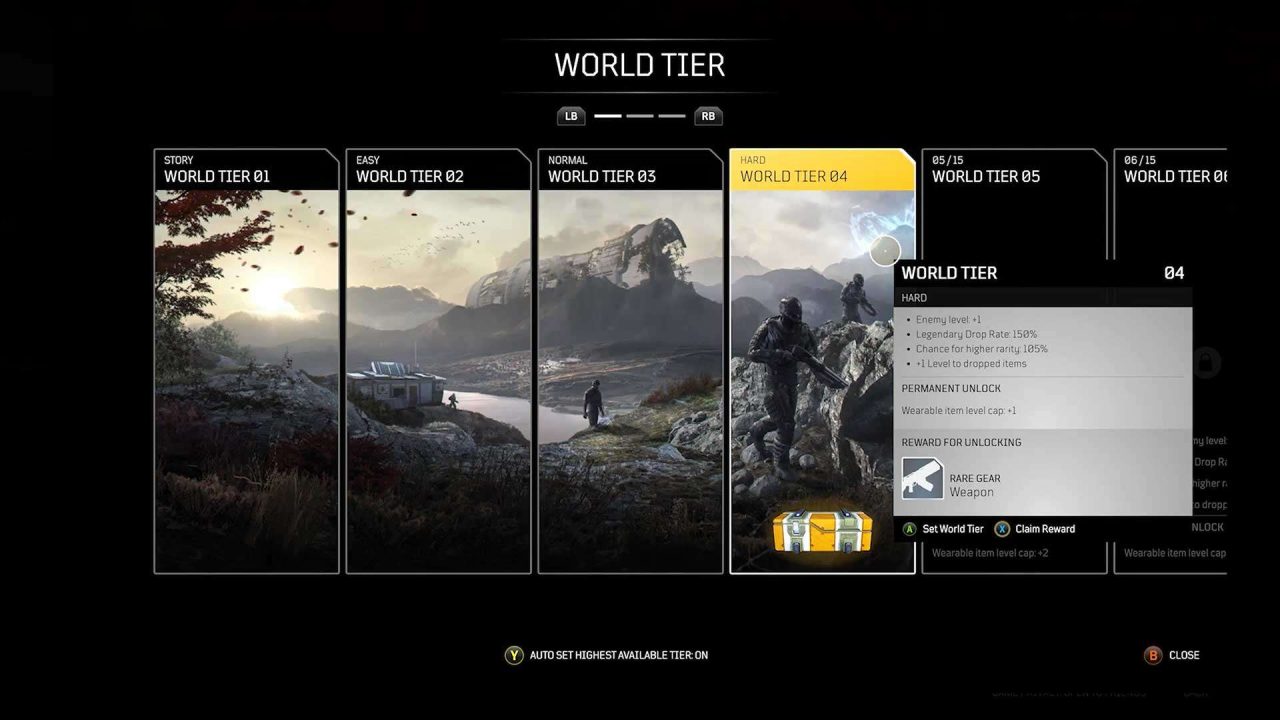 Thanks to World Tiers, a similar concept to Diablo 3’s Torment levels, the action can be scaled to the player’s ideal state. Looking to simply run through the story and close out the mysteries of Enoch? World Tier 1 is Story difficulty. Maybe your loadout is decimating forces too easily and you are in need of more formidable cannon fodder. From World Tier 4 and up, enemies are placed above the player’s current level. There are 15 World Tiers in total, each widening the level gap of hostile combatants while also increasing loot and level rarity and legendary drop rates.

Although Outriders is a complete package, a welcome shift in today’s industry, it still wants to place itself in your everyday rotation. Jumping in and grinding out World Tiers to test the effectiveness of new mods and gear creates an exciting loop. Becoming broken is a journey that will resonate with those that enjoy drilling down on MMO and RPG stat sheets. And this game certainly offers up plenty of ways to transform the classes from operable to OP.

There is no better place to assess builds than the endgame Expeditions. After the story has wrapped up its major plot points, Expeditions become available. These post-game missions are where players will truly be tested. Challenge Tiers, separate from World Tiers, are introduced to further amp up the difficulty. This is where build refinement and gear farming will primarily be housed, unless RNG was kind to you throughout the campaign. Now, take all of these areas and multiply it because Outriders is a multiplayer game. Up to 3 people can join in on the story and Expeditions. It’s one thing to master self-contained synergy between weapons and skills, but it hits an entirely new level when three separate classes are working together to cover the battlefield in bullets and status effects. Learning when to use interrupt skills or combo with a co-op partner’s build opens up deeper avenues of build exploration.

Cooperative play would be a whole lot better if it wasn’t for a bevy of connection issues. Matchmaking is currently a mess and despite being billed as a crossplay title, that feature is not working as intended. In fact, the issue isn’t solely tied to multiplayer; single player is bound by the always online requirement, too. The reasoning behind this is to deter cheaters, but in a game without PvP or any live service content that could be lessened through exploits it doesn’t make much sense. Being ripped from experiencing the campaign while playing alone because of a server disconnect, a semi-regular occurrence through launch week, became increasingly frustrating.

It’s a problem that has resulted in some player inventories being completely wiped. Having the loot aspect of a looter shooter threatened by the instability of an unnecessary connection requirement certainly acts as a deterrent. During my play time, I did not encounter this issue, but the looming threat accompanied each server disconnect or game crash with a small heart attack. 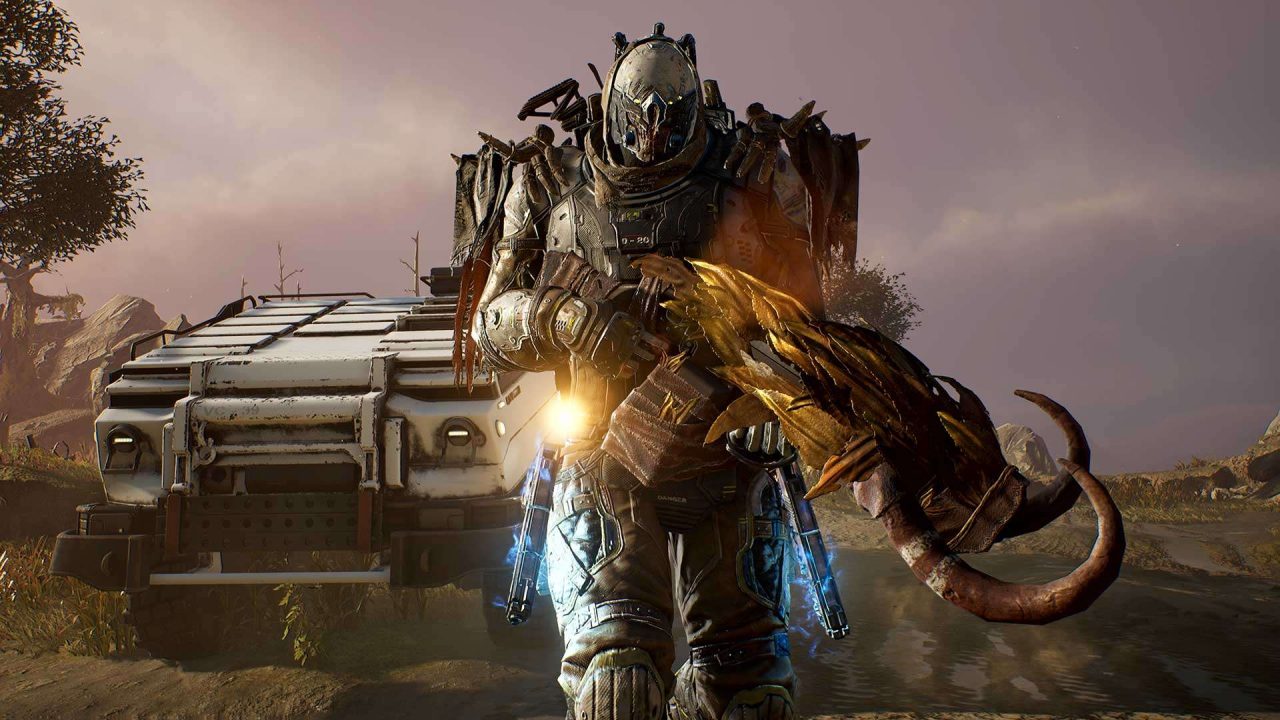 As the palpitations subsided, it became clear that issues are still intertwined through the experience, most notably the controls. Controller deadzones and aim acceleration force the player to conform to these uneditable settings, making those first few hours an adjustment period. Other oddities included jarring cinematic transitions with some cinematics being replaced by a black screen all together, irritating micro-stuttering on PC, and irregular gear application effects (ex: health being cut in half).

Outriders is a back-and-forth experience. All that is brilliant is often undermined by a system or function that holds the title back. And it really is an intense game of tug-of-war between these areas. It’s no wonder that People Can Fly’s newest offering is turning out to be so divisive.

Despite the problems of Outriders, I kept coming back. People Can Fly are on to something here. The aggressively-focused gunplay is a welcome change of pace from usual cover shooters. It generates a sensation of joy as a build finally clicks and World Tiers are conquered. Not all of the problems noted can be fixed via patch, but several of the biggest offenders can be smoothed out in future updates to bring the experience closer to the intended vision. Outriders has a way to go to sit up with looter shooters like Borderlands, but much like Borderlands it has the framework in place for its sequel to smooth its rougher edges and shine as a mainstay IP for Square Enix.