Rebranding of The Golf Club series. 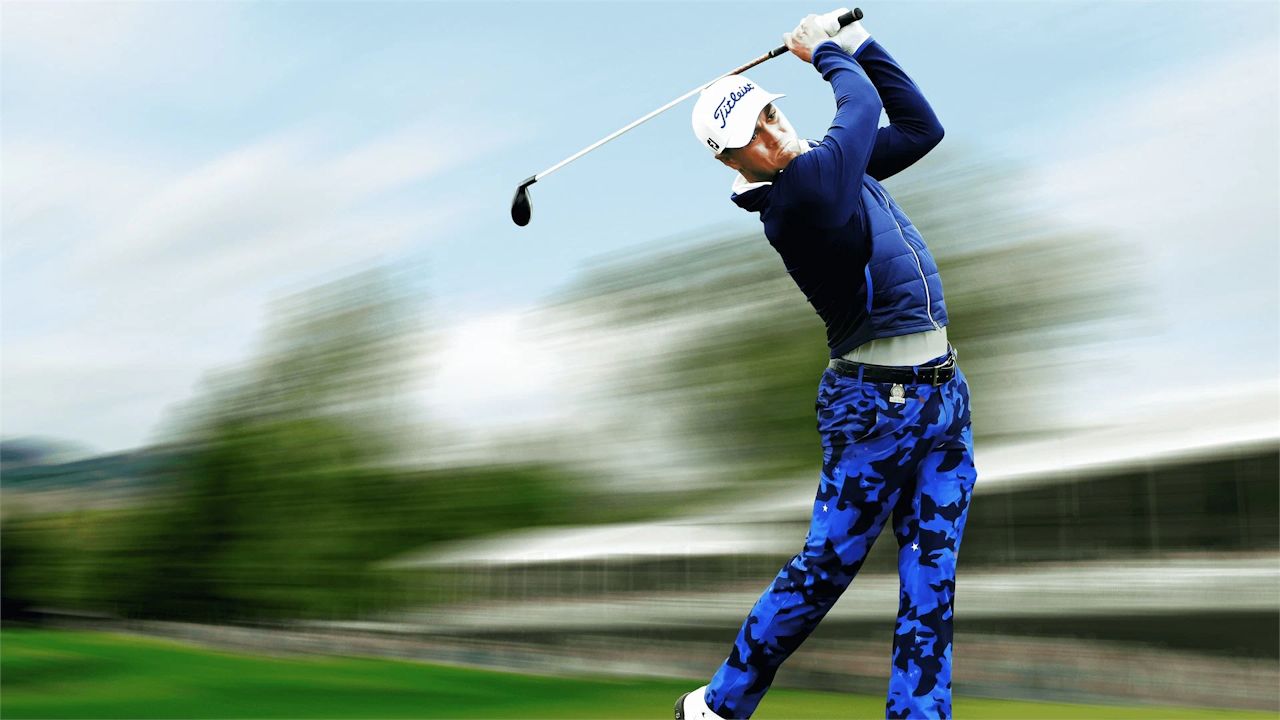 Annual sports franchises such as Madden and FIFA just continue to keep coming year after year for better or worse, while some other sports series have dwindled or died off entirely. One of the sports franchises that has been in questionable territory for a while now has been the PGA Tour series that was once held by EA Sports. After moving on from Tiger Woods, they attempted one other game before leaving the franchise behind entirely. This is where developer HB Studios stepped in to fill that void with The Golf Club sans the PGA Tour license before acquiring it in a re-release of the sequel in a team-up with 2K Sports. Rather than keep The Golf Club name going, the two instead have rebranded the series now as PGA Tour 2K21.

PGA Tour 2K21 features Justin Thomas as the cover athlete, who is currently ranked as the #2 golfer in the world as of the release of this game. He is joined by 11 other pro golfers and their likenesses, though there are a lot of top golfers missing from the game as well. In fact, Thomas and Bryson DeChambeau are the only are the only two golfers found in the top 10. The rest come after that, with the lowest overall being Jim Furyk at 105 currently. 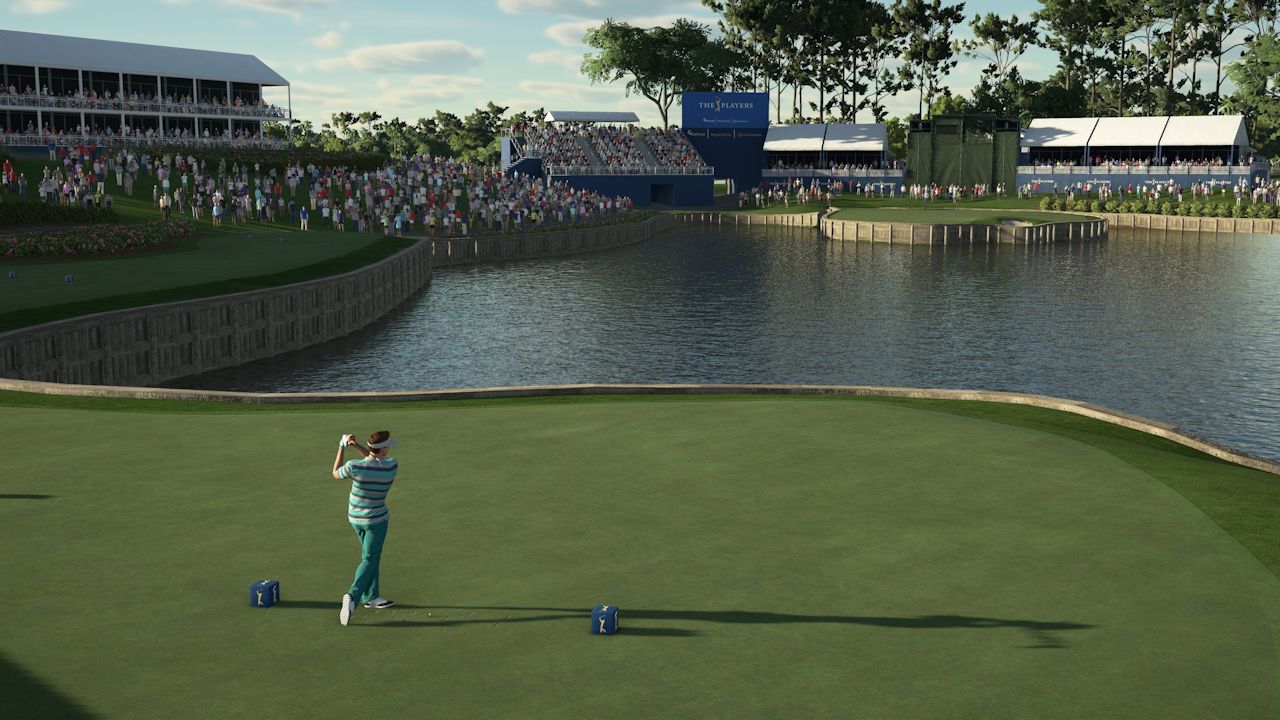 You will not actually be playing as any of these golfers in the game, as the focus is instead placed on your own player that will be competing against them. This is done through the game’s MyPlayer feature, which anybody that has played the NBA 2K series should be very familiar with. The game has a fairly robust character creator that lets you decide just how your golfer looks when being used. While there are no LPGA golfers in the game otherwise, it is a very cool feature that you also have the option to create a female golfer if you would like. On top of the design of your golfer looks wise, you also have to decide what type of apparel they wear from numerous real world brands like adidas and Callaway Golf. In no big surprise as a 2K Sports game, you will have to grind for the in-game currency to earn much of the apparel in the game, along with some that are unlocked with progression.

With your MyPlayer, you only have a few options to choose from game mode wise such as Play Now, but PGA Tour Career definitely is the main attraction. This mode is your typical player career mode in a sports game, with you getting to pick at which level you start between options like the Korn Ferry Tour or jumping right into the PGA Tour. By picking the lower options, you will receive challenges that you must complete to move up to the next level.

Once you are in the actual PGA Tour, you will have some new goals as you strive to win the Tour Championship and take home the FedExCup. This is done by earning points based on your finishing positions to qualify for the FedExCup Playoffs and eventually the Tour Championship. You also won’t find the opportunity to take part in the various majors here, so your eyes will be exclusively on the FedExCup. There are sponsors that you will pick up along the way as well, with many of the real world brands being offered like mentioned above. 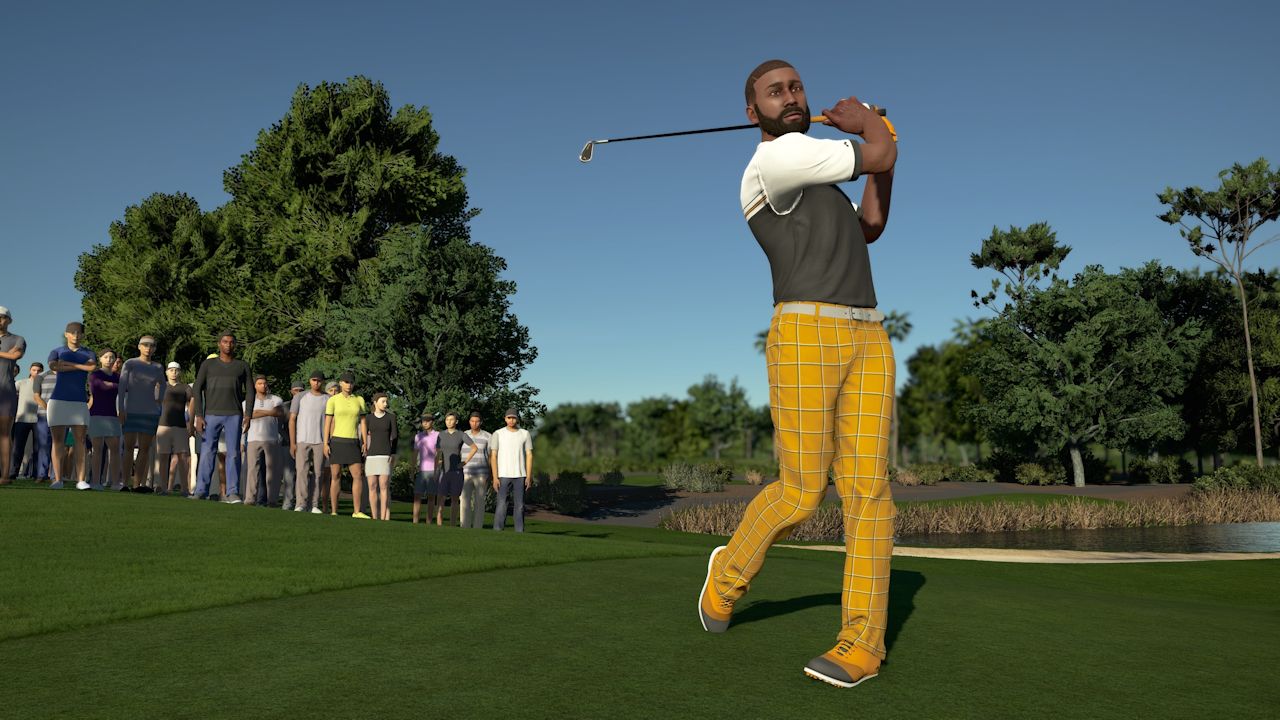 While you are making your way up the ladder in the PGA Tour, you will also gain rivals that you compete against to get the best placement that will help you earn special rewards. Once you reach a certain number of rival points, you will move onto another rival and so forth. The rivals system may not be all that involved, but it gives you a little extra incentive to do well with the extra direct competition.

For those that aren’t satisfied with the virtual rivalries, PGA Tour 2K21 allows you to take the game online to face off against other players as well in live competition. There is the matchmaking option with other random players online or create private matches for when you want to play against friends specifically. On top of that, the Online Societies have been carried over from The Golf Club games, which are the game’s version of an online league.

Golf video games have varied greatly over the years, with some going more for the simulation side while others have gone with the arcade side. Series like Everybody’s Golf have always gone for the latter, but The Golf Club and now PGA 2K21 leans more towards the simulation side for better or worse. This means that those used to the more arcade style might have some issues with the gameplay at first and find yourself struggling a bit. The game is pretty forgiving, however, and it shouldn’t take you too long to get used to it and be hitting birdies all day. 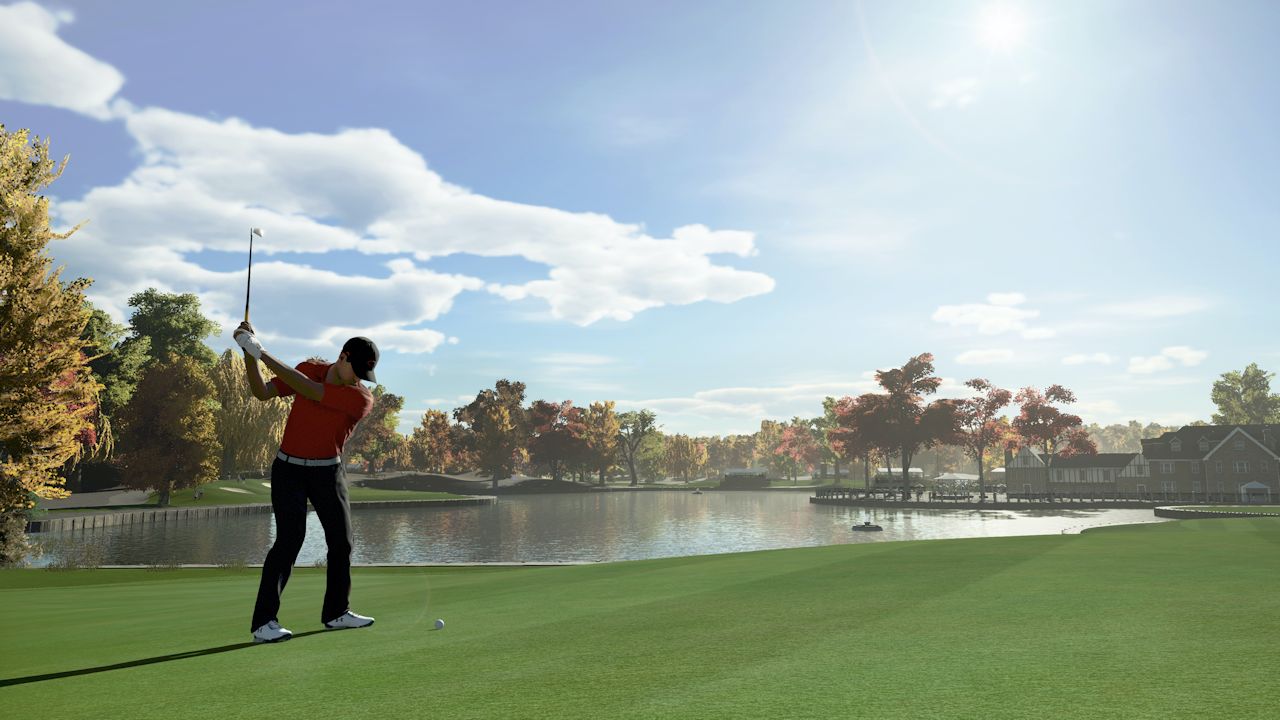 The gameplay itself is pretty simplistic on the surface, but can definitely get more technical along the way. You can pick your club of choice at anytime, with the default choice typically being one of the best for the situation. From there, you can press Y to go to an overhead view that will show you the general area where you ball should land based on your club and distance settings. You can adjust things like fade and loft here as well via True Shot, which can really make or break some of your shots. Once ready, you have to pull back the right analog stick and then flick it forward, with you doing both in as straight of a motion as possible. This is definitely easier said than done, so you’re going to have to take some time to perfect that motion.

Once you get to the green, it’s time to pull out your putter and try to get the ball in the hole. You have the previous tools at your disposal here too, but the act of putting is a little different. This is due to thing such as elevation in the various directions that are shown with markers on the screen to help you out. Once you have setup your putt, the game offers the ability to see a preview of the ball path by pressing A. This can let you adjust after the fact to greatly increase your chance of making the putt, but also can make putting a little too easy at times even from a long distance. I did appreciate that you could not continually do the ball paths again and again to make it a complete cake walk.

While some people may find the difficulty just right, there are definitely those that will find it too easy or too difficult when it comes to making the cut and doing well in general. The good news is that the game features a number of different difficulty options for you to tweak. You can just pick between the difficulties themselves like Beginner, Pro Am, or Legend among others, or you can pick between the individual settings like disabling swing timing if you’re struggling too much with hooking or slicing on your shots. 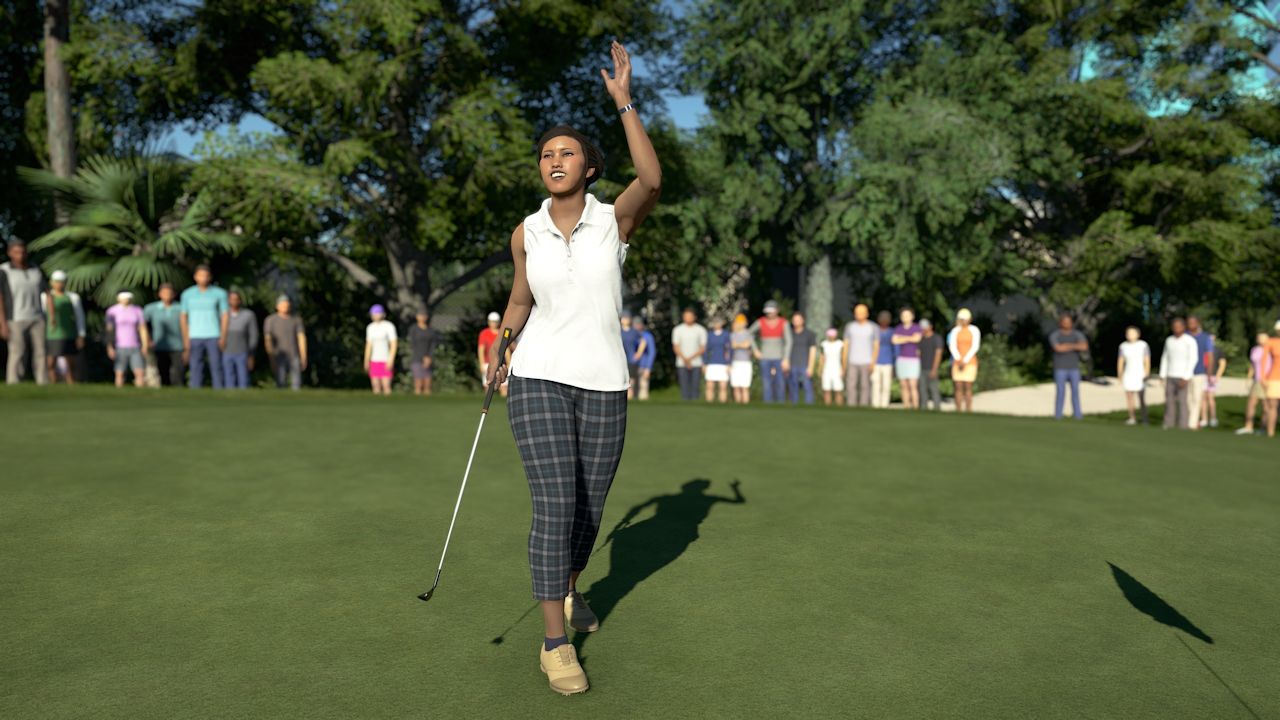 Those coming into PGA Tour 2K21 expecting to be able to play all the top golf courses in the world definitely need to temper their expectations, but that is not to mean that there aren’t a quality collection of course to choose from. In fact, there are nearly double the real life courses found in this one compared to Rory McIlroy PGA Tour, along with a number of other courses offered in the game as well. With 15 total real life courses available, 10 of them are TPC courses from all around the country. These include some really cool additions like Quail Hollow that help to round out the official course list. New courses being added would be a logical form of post-release content, so hopefully they will do so in the future.

These 15 courses are not just random courses with the names slapped on, but rather have been scanned and are completely representative of the real life courses themselves. This is combined with what are very good visuals here, even though some of the trees and other obstacles around the course can look a little plain at times. The lightning is where the game really shines visually, as it is utilized very well across the different courses. This is combined with what is a pretty solid presentation overall that features the play-by-play crew of Luke Elvy and Rich Beem.

PGA Tour 2K21 also has a Course Designer that allows you to create your own course that you can play on, including picking the theme, terrain, and layout itself. For the theme, you have right varied options, with desert definitely being the most unique of the bunch. The themes were limited in The Golf Club games, so it’s great to see you have many options here. The terrain options include things like water level, trees, and plants, while the layout options include things like the number of holes, the number of par threes and fives, as well as size of bunkers and fairways. 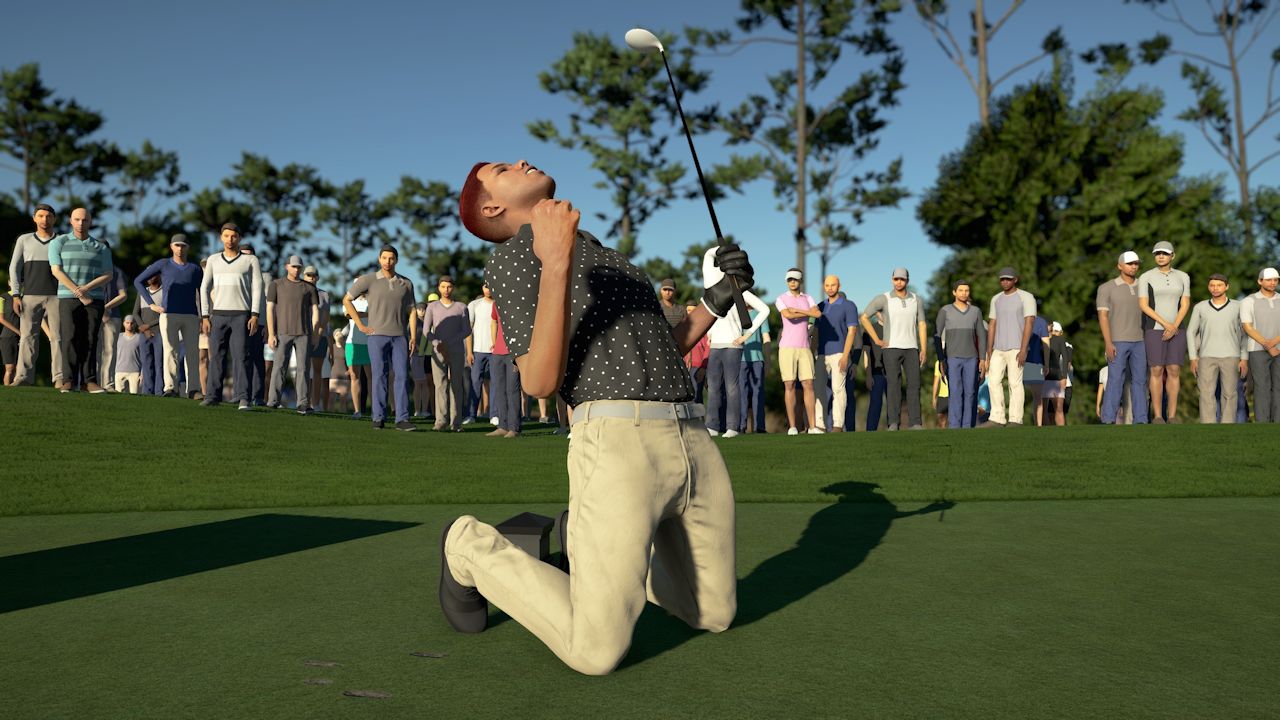 From there, you get to the much more intricate part of the Course Designer, where you are actually going to shape the landscape and everything else about your course. You literally get to terraform the entire course if you want to, adding in hills, obstacles, and much more. One downside is that this is a very involved process that a lot of people will probably not want to deal with and will just skip over the Course Designer as a result. Also, the publishing of the course for others to access is very confusing and isn’t spelled out well at all, compared to say roster sharing in other sports games that are very easy to manage.

The Golf Club games had a niche following, but there is no question that the rebranding with PGA 2K21 will increase the reach of the game. Thanks to the customizable difficulties, the game is pretty approachable for all kinds of players, albeit with not that much to do overall due to the minimal game modes offered. The solid roster of courses and enjoyable gameplay itself in PGA Tour 2K21 is a good start that hopefully will be improved upon in the coming years.

As the first game in this newly rebranded series, PGA Tour 2K21 feels a little bare bones in some areas while also managing to build a solid foundation for the future now that they have the PGA license behind them.