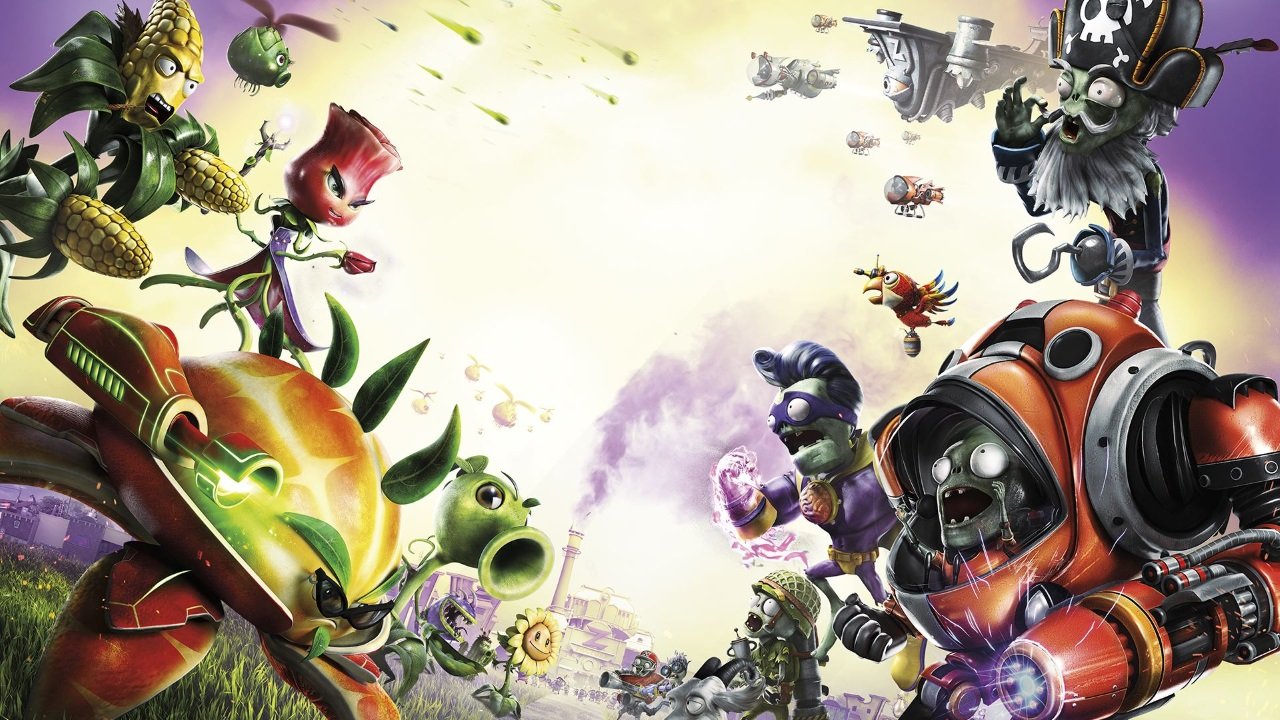 Few people could have predicted the track that the Plants vs Zombies series has taken. Starting out as a simple tower defense game, the series has expanded to PCs, consoles, and mobile platforms in many different ways. One of the more surprising forms that the franchise has taken was 2014’s Plants vs Zombies: Garden Warfare. The game took the simple mechanics of the original and threw them out the window, instead opting for a more traditional third person shooter experience.

Even more surprising was that it worked exceedingly well, delivering a fresh and fun take on the genre, with the colorful universe as its setting. Now EA and PopCap are back with a sequel, Plants vs Zombies: Garden Warfare 2. Instead of reinventing the formula this time, they have went for a more measured, iterative approach, delivering another great experience, though not quite as surprising this time around.

The world of Plants vs Zombies is kind of self-explanatory, in its own very weird way. There are plants and there are zombies, and they are fighting each other for dominance. In Plants vs Zombies: Garden Warfare 2 this war has essentially resulted in a stalemate, where the zombies control half of the map, and the plants retain the other half, with a war torn battleground standing in between them. 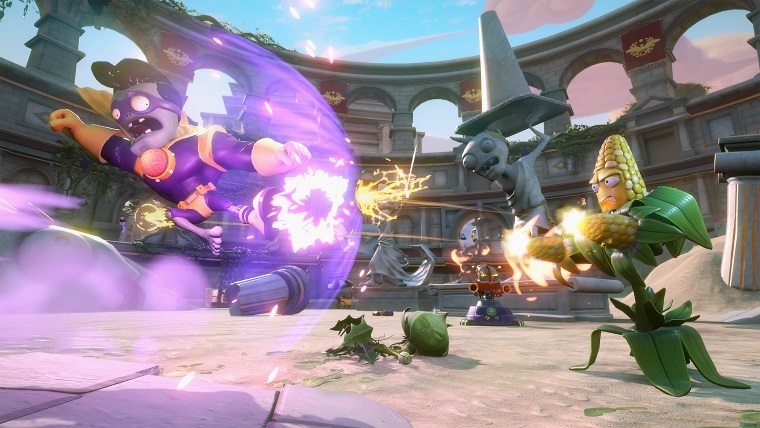 This story shift doesn’t impact the gameplay too much, but it does alter the way players will interact with the game. Instead of menus, players are dropped right into the base of either the plants or the zombies. From there they can jump into any game mode they want, or just explore the surrounding area, scoring some kills, earning coins, or even finding some hidden areas and quests. It’s not a huge change, but it does make for a better overall experience, which is sort of the theme of this sequel.

Iterative changes are found throughout, with one of the larger ones being the addition of new playable characters. Plants vs Zombies: Garden Warfare was never overly concerned with its balance, simply making sure that the two factions had fighters of equal abilities within their roster, then leaving it up to the players to decide which were more valuable, and what class was needed for the coming battle.

That remains the same here, with each side gaining three new characters of varying effectiveness and strength. The Imp with Z-Mech, Captain Deadbeard, and Super Brainz join the zombies with Rose, Citron, and Kernel Corn rounding out the plants. These six new characters are easily the most unique of the bunch, some having abilities with no real parallel on the other side, such as the Imp’s Titanfall inspired mech suit. This could result in some one-sided matches if players figure out how best to utilize the characters, though that, along with figuring out a good counter, is part of the fun.

New game modes join in on the improvements, with most feeling like reworkings of other modes, rather than something wholly new and unique. Regular multiplayer sees the return of all your favorites, along with new ones like Gnome Bomb and Suburbination. These are mostly just remixes of modes from other shooters, but they’re nice to have, offering some variety for players that might be tired of the standard Attack/Defend mode. 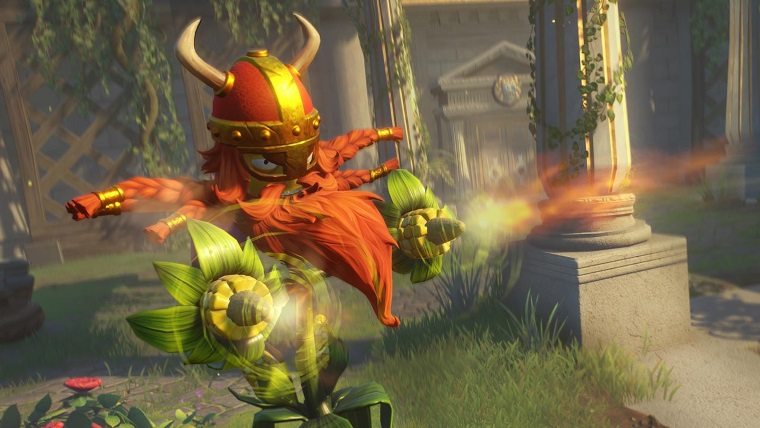 Plants vs Zombies: Garden Warfare 2, like its predecessor, is best played with a group. Of course, there is the online multiplayer component, which works fine with random matches, but much better with a nice set of teammates. Garden Ops, and the newly introduced Graveyard Ops that switches the teams’ places, are the requisite horde mode, allowing teams of up to four players to face off against waves of increasingly difficult enemies. Some nice changes were made to the mode, offering longtime fans a chance to enjoy something new, though it’s not enough to really alter it in any significant way, though that wasn’t really necessary thanks to the excellent work done the first time around.

Playing with others is definitely the way to go with PvZ: GW2, however PopCap has went to great lengths to make the game more palatable for solo players, introducing a full single player campaign to the proceedings. The story isn’t anything too engaging, but being able to jump in and play through some missions is really enjoyable, and helps for those that might not have a big enough group for the true experience.

Both factions have their own surprisingly lengthy campaign. The missions themselves usually boil down to “go here, kill that” or “stay here, defend this”, but they’re fun enough that most won’t mind, and the occasional new mission type will truly please. These missions also offer players a chance to level up their characters, and earn coins to use for unlocks.

Unlocks are really the main focus for Plants vs Zombies: Garden Warfare 2. Just like the previous game, there are dozens of different characters to unlock for each of the factions. You are even able to import your characters from the previous game, meaning many will start off with their favorites already unlocked. Many of these unlockable characters have unique abilities, or modified stats and weapons, making it so you can try to find the perfect match for your playstyle. The real draw for a lot of them is just how cool they look though, with the designs being truly distinctive and interesting. 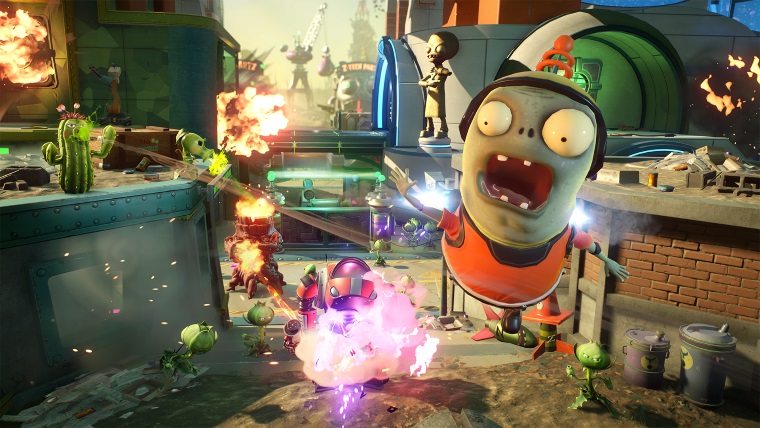 Everything about the visuals in Plants vs Zombies: Garden Warfare 2 is stellar really. It’s not a huge jump over the first game, but that one already looked fantastic, so it wasn’t necessary or expected. The Frostbite 3 engine truly shines in this game, offering colorful worlds filled with equally fun and enjoyable characters. It never bogs down with the action either, delivering a responsive and smooth experience from start to finish.

The audio experience is likewise enjoyable and fun, with catchy tunes that many players will be humming to themselves for some time. Characters make noises throughout the match that somehow never get old, sounding perfect for the environment, and really making for a light and amusing atmosphere. Sound glitches did pop up however, with some channels seeming to drop out, and audio being delayed. It wasn’t enough to be a true detriment, thankfully.

Plants vs Zombies: Garden Warfare 2 picks up right where the first game left off, delivering more fun, lighthearted multiplayer action. The improvements and additions made here are all definitely welcome, taking what worked and enhancing it, while avoiding messing anything else up by accident. However, those improvements are all fairly small in the grand scheme of the game, meaning those looking for a totally new and fresh experience will be disappointed. If you just want some more of what you loved in the first game though, then this sequel will truly impress.