The latest news in the world of video games at Attack of the Fanboy
November 27th, 2015 by Dean James The RPG style found in the mainline Pokemon franchise is pretty simple with catching the Pokemon and then training them to fight in teams of up to six against the competition as you travel the region earning gym badges. With this series, you are a new trainer that is going on their own journey as per usual, but with a bit of a twist. Instead of being the usual human trainer, here you are a Pokemon who was just transformed from a human.

Pokemon Super Mystery Dungeon starts off by asking you a series of questions that are very random, which is some sort of personality test to try and match you with a specific Pokemon. The choices are actually quite impressive, including each of the three starting Pokemon from each generation, along with Pikachu and Riolu, for a total of 20, a new high for the series. While the game does pick a Pokemon for you, there is the option to say no and pick whichever one is your favorite, which mixes the two methods available in past entries. Beyond the Pokemon that you use, you will also have a partner in the game that is chosen in the same way. 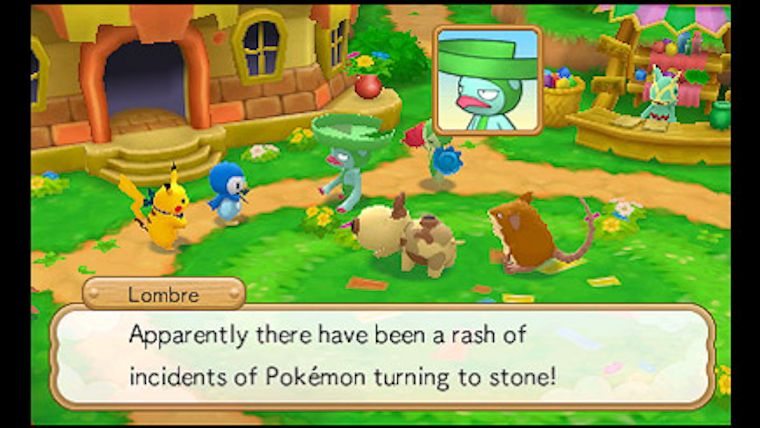 Unlike the mainline series that typically gets moving very quickly, with a rapid departure from the home town, Pokemon Super Mystery Dungeon takes it a lot slower, which does hurt the pace quite a bit. Instead, you are introduced to Serene Village, which is where you will be for awhile as you learn about the game mechanics in a somewhat monotonous fashion.

The game is split into days, with many of them being as simple as waking up and going to school to find out about a mission. This leads to long tedious dialogue between characters, most often involving your chosen partner Pokemon. These certainly seem more oriented to the younger gamers, but even then it is a little too drawn out this early in the game, with painfully long stretches of non-gameplay at times. This happens way too much early in the game, but luckily it opens up much more as you play.

When you finally do get to the most important part of the game, the dungeons, you will find a much more enjoyable experience, though still far from perfect. These areas utilize a pretty simplistic dungeon crawler setup where you explore floor after floor of randomized design. This is a really fantastic feature, as it prevents the game from ever feeling the same twice for those that may want to play through it multiple times.

The dungeons themselves are made up of very different types of Pokemon, depending on the area you are in, with the game featuring pretty much every Pokemon in some way or another, most often on the battlefield. Unlike some spinoffs that were limited in just how many Pokemon were involved, Pokemon Super Mystery Dungeon really does try to feel like as complete an experience for Pokemon fans as possible.

The movement within the towns are just as you would expect in any modern Pokemon mainline game, with full directional motion that feels perfect with the 3DS’ analog stick. However, controlling your Pokemon within the dungeons can be a chore. Within these areas, the movement is much more stilted, with the inability to move in any direction, but rather being stuck to limited control on a grid based system. 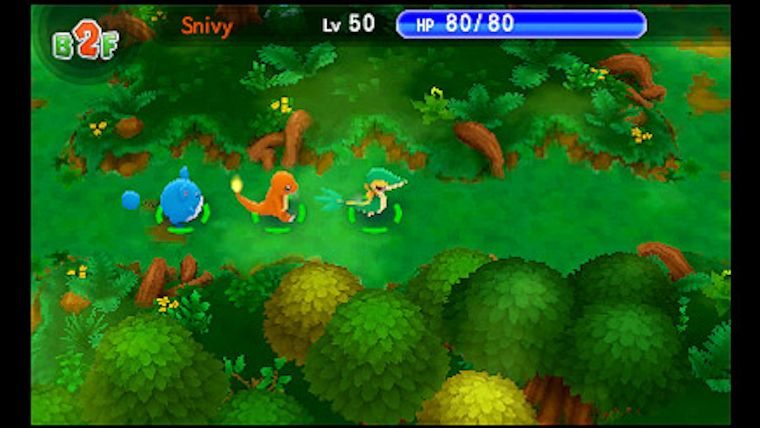 This grid based setup comes as a result of the gameplay that is organized like a board seen in games such as Code Name Steam or Final Fantasy Tactics. However, the gameplay itself couldn’t be anymore different, as rather than doing it in a strictly turn based way, Pokemon Super Mystery Dungeon offers a real time based system that is more befitting of this style game.

While the movement itself may be harder to control at times, the gameplay helps to make up for it here. Pokemon Super Mystery Dungeon blends together the classic Pokemon type setup with this dungeon crawler gameplay very well. Each Pokemon has its own HP as always, but the game also introduces a Belly meter, which is essentially a stamina meter when traversing these dungeons.

Just like the mainline series, yourself and your team of Pokemon also have levels that increase through gaining experience in battle. With these higher levels come better moves to utilize, with each Pokemon being allowed four total at one time. These attacks can only be used a limited amount of times, based on the PP as well, which anybody familiar with the franchise should recognize.

Pokemon can also use items that you pick up in the dungeons or purchase, though you can only hold a certain amount. As a result, you must strategize on which items to keep and which to discard throughout. The most important of them are the combination of looplets and emeras, which are brand new to this entry. Looplets are essentially devices that can hold the emeras you find within dungeons, which can then power up your Pokemon even further. However, the unique element here is that the emeras disappear forever as soon as you leave the dungeon, so the element of surprise continues to be ever present in the gameplay here as well.

Pokemon Super Mystery Dungeon makes attempts to evolve this Pokemon spinoff to a new level, but for the most part feels very much the same. The gameplay that meshes the classic Pokemon formula with dungeon crawling works very well and the inclusion of the full lineup of Pokemon is very impressive, but the pace of the story surrounding the gameplay is so off in the early game that it can take a long time to really get invested in Pokemon Super Mystery Dungeon.