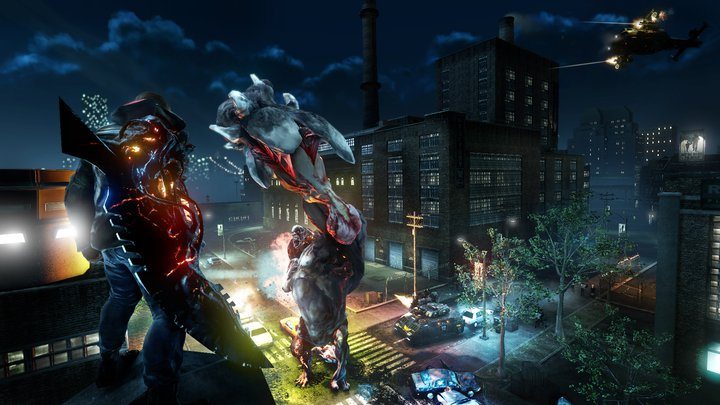 Your family is dead, victims of a deadly viral outbreak.  Your city is under siege by a mysterious organization known as Blackwatch, the US Government, and Alex Mercer, and it’s unclear just who’s on your side and who’s not in Prototype 2.  You’ll assume the role of Sergeant James Heller, a man that’s looking for answers in a tangled story of a second viral outbreak in New York City that is thought to be much worse than the first.  Set about 14 months after the events of the original game,  Heller is infected with the Mercer virus that gives you evolving supernatural mutations, the ones that you’re gonna use to find out who’s responsible for your family’s death.

Staying true to its roots, Prototype 2 is once again a third person action game, with a wide open world to explore.  New York is divided into three distinct zones, each with a different feel for the level of severity of the outbreak.  The Red, Yellow, and Green Zones each represent different types of challenges for Heller and your wide range of missions will have you criss-crossing between the different settings on a variety of tasks.  Notably different from the original Prototype, each zone has a different aesthetic feel.   Alongside a graphical palette that has seen an upgrade since 2009, Prototype 2 offers a more vibrant playground to get lost in.

But Prototype 2 is all about player empowerment.  Your character’s evolving mutations will allow you to perform some pretty horrific feats.  Like the original game, you’ll be able to traverse your surroundings by scaling buildings and soaring through the air, with a talent tree that can make you more proficient in a number of areas depending on how you spend your earned bonuses.   A wide variety of supplemental content in addition to the main storyline missions, will have Heller unlocking new talents that further bolster his abilities performing side missions that vary from finding hidden collectibles, targeting specific enemies, and cleaning infected lairs, among others.

A mixture of stealth and action,  Heller is a shoot on sight target.  Blending in with the crowd is of utmost importance if you are to complete your objectives.  So his shapeshifting ability is one of the primary mechanics in Prototype 2.  You can consume enemies, much like the original,  and take their form. This will allow you to blend in, infiltrate enemy lines, and complete objectives without alerting anyone.  A detection meter will alert enemies to your presence if you act suspicious, and progressing through the game, technology that alerts enemies to your presence will become prevalent as well.

Alert your enemies and you’ll be forced into combat, which has seen its fair share of improvements since the original.  You can always try to lose your enemies by running, but a number of new mutations have been added to the roster of attacks that can be used in Prototype 2, that make clearing out a strike squad more fun than ever before.  Physics based tendril attacks cause massive environmental destruction by attaching to your target and using the environment to cause damage.  Your claws, which are primary used for melee attacks,  will leave a pool of bloody pulp in your wake and can slice through multiple enemies at a time.  Combined with Heller’s agility and the spectacle of it all, Prototype 2’s combat is a blast and seems to have a much better flow than the original.  Different enemies will require you to use different tactics and strategies, while following on-screen prompts a la Batman: Arkham City.

Like most open world titles, the pacing of Prototype 2 is all of what you make of it.  Since there is a clear advantage to sniffing out all of the collectible items in the world, because of their direct correlation to your character’s development, its easy to get side-tracked in the game while trying to find all of its secrets.  Many of the side missions fill in the blanks for the story nicely, so it all feels related in some way.  The main story line takes just enough twists and turns to keep you interested throughout, and that goes double for those that made it through the original.  While it seems odd that Prototype 2 would introduce a brand new protagonist in this game, Heller is oddly more likeable than Mercer.  He gives some comedic relief to the game, to prevent it from taking itself too seriously.

As far as sequels go, the Prototype 2 development team obviously had a much more defined vision of the game that they wanted to create, than they did in the original. Improving on nearly every facet of the game, Radical Entertainment definitely learned what fans liked and didn’t like from their first effort, refining the necessary elements to produce a more complete package in their sophomore attempt. The only real problem you’ll likely find is that feeling of what to do now. Once you complete the game, there’s not much to keep you coming back to Prototype 2. With no multiplayer functionality, it’ll be a hard sell to keep fans coming back for online challenges and leaderboard competitions. As far as single player experiences go, if you enjoy action or open world titles, Prototype 2’s gritty and gory take on both genres will make this revenge quest one of the best in recent memory.