The latest news in the world of video games at Attack of the Fanboy
September 6th, 2015 by Dean James 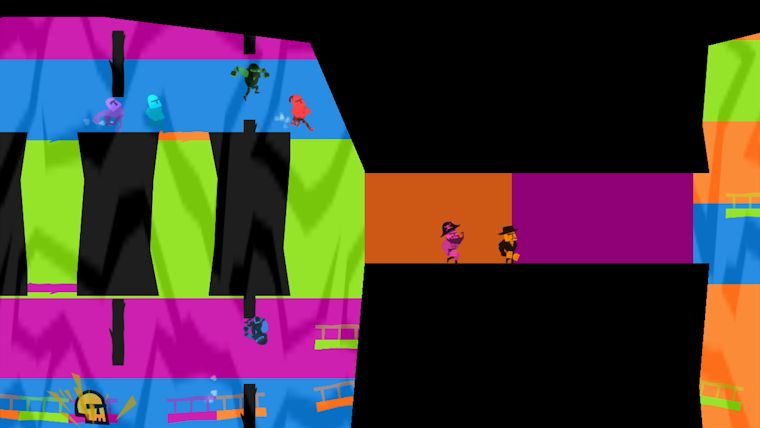 Old school games typically were rather simple experiences that were built around providing hours of fun for gamers. As games have gotten larger and more complex, many of those classic elements have been lost.  13AM Games is one of the new kids on the block and have managed to take classic game mechanics and mix them with a multiplayer that gamers of the ’90s could have only dreamed of in their debut, with Runbow.

13AM Games was once quoted as comparing some elements of Runbow to that of Mario Kart, and the game’s very impressive up to nine player multiplayer plays a big part in that comparison. Offering players the ability to use pretty much every control scheme available on the Wii U is very helpful and can make for a massive party experience, which we sadly do not have enough of these days, in lieu of online multiplayer.

This multiplayer is spread across every game mode in the game, though Runbow can also very easily be enjoyed by one player. Two specific modes are offered for the single player experience with An Epic Adventure Awaits and Take On The Bowhemoth…If You Dare, which multiplayer can even further enhance.

Adventure provides a respectable number of short stages with varying objectives. The majority of them involve you just making it through the various obstacles and getting to the trophy at the end, while others mix in collecting Runbucks (coins) and defeating a certain number of enemies.

All of the stages utilize a very unique color mechanic where platforms and barriers appear and disappear based on the color that is currently on screen. These rotate constantly throughout the various levels and require you to be paying full attention at all times if you plan on completing any stage.

The 140+ stages are set up across four sectors that each culminate in a boss battle, which is include in the stage total. These battles at first just seem like typical levels, but at the end they increase in difficulty as the villainous Satura throws more intense obstacles in your way that must be surpassed to get to her and punch her out.

The stages in Adventure range in difficulty, but those looking for a major step up should instead look to the Bowhemoth mode. This gauntlet of consecutive levels takes the platforming and somewhat puzzle solving elements of past levels and increases the difficulty tenfold. These are unlimited lives here, but the faster you can complete this, the more you can unlock.

There are plenty of unlockables found in Runbow, with them being spread all across the various game modes. These include character art and even more desirable, unlockable characters. The game itself has its own characters made just for the game, but there are some pretty exciting additions for fans of some popular indie games. The biggest inclusion is that of Shovel Knight, who has a very fitting method of being unlocked, based on a special cheat that Shovel Knight had in his own game. Offering a large number of different characters is a very welcome decision in the large multiplayer matches, as players are even more distinguished from one another.

The disappointing part is that every single character plays absolutely the same as the rest, with only aesthetic changes to each one. This does make the game more even and fair, but it would have been better to see a balanced roster of characters to choose from that would make changing characters worth it, outside of just for looks.

With the original Runbow characters, Shovel Knight, and more, you can take them into every game mode, but most importantly the multiplayer-centric options. Get Ready To Run is probably the most simplistic of them all, but can also be an incredible amount of fun with a large number of players. This is literally the same as the aforementioned platforming stages where the goal is to get to the trophy, but offers a quick pick up and play feel, without being tied to an adventure mode. 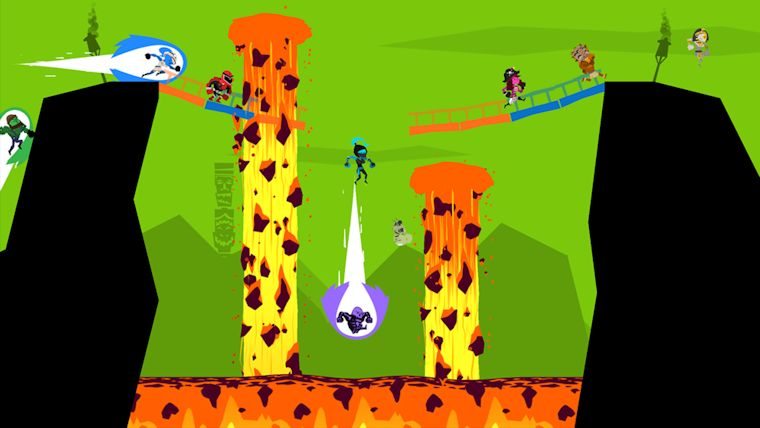 Ready to Run also is where the game’s number of power-ups really come into play, also taking a note from Mario Kart in a way. These really can make things interesting as you make it through the rounds of different levels, with some being helpful while sometimes also worth avoiding.

For those looking for a game mode similar to the latter, but want a little more depth to it, King of the Hill mode is a perfect alternative. Rather than the usually left to right movement, King of the Hill has smaller one screen arenas with players fighting it out for the “hill” that must be held for a period of time to win. This offers a ton of fun and may just be the most contentious of them all in giant multiplayer matches.

Step into the Arena mode you might assume would just be a simple fighter, but it is really so much more than that. It instead almost takes some cues from the Wario Ware series with quick arena battles that often have the player more concerned with the environment around them instead of the opponent. If one manages to survive the initial stage hazards, then it will come down to who can knock out the other, which makes this a lot of fun, especially with the ability to adjust how many rounds you want to play.

Just when you think the game modes were at least somewhat similar in execution, Colour Master is introduced — which completely changes up the gameplay, this time by utilizing the Wii U GamePad. The Colour Master literally takes control of what happens in the previous race style stages. This pits one player against the rest and is in some ways similar to the recent Bowser mode that was introduced in Mario Party 10.

If you are playing alone, you actually will be locked entirely out of Arena, King of the Hill, and Colour Master modes entirely. It is understandable with Colour Master, but some sort of AI should have been included for those that wanted to play the very fun Arena and King of the Hill modes and happen to be alone, though luckily there is a saving grace in that department. 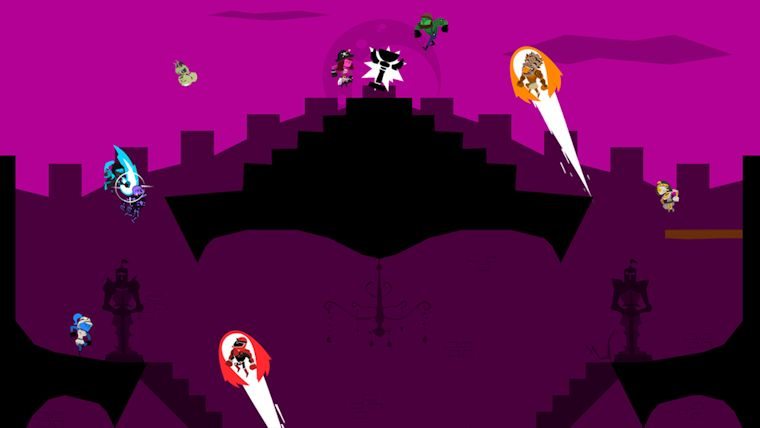 While the local multiplayer is going to without a doubt provide gamers with the most fun, there is also the option to take the game online as well. With the option to play with friends or just random players, the three basic multiplayer game types are available here. The only problem that crops up occasionally is the inability to find enough players, but this is rarely an issue, especially with being able to stay with parties after a match.

Local party multiplayer has definitely taken a hit in recent years, but games like Runbow prove that they very much still have a place in today’s gaming realm. Offering a splendid amount of content in one package that can be enjoyed in both single and multiplayer, the colorful Runbow easily deserves a spot in the party game lineup for any Wii U owner.