The latest news in the world of video games at Attack of the Fanboy
September 24th, 2010 by William Schwartz 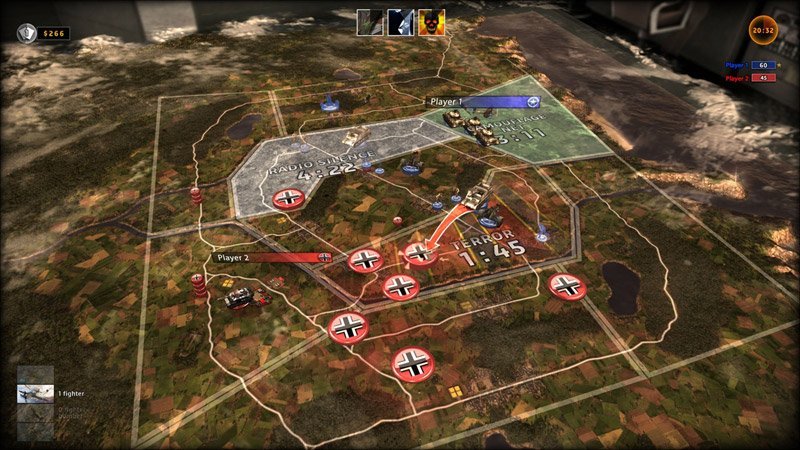 R.U.S.E. is a real-time strategy game that allows players to bluff their enemies to lead their nation to victory, controlling the action using views that range seamlessly from the heart of the battlefield to the full theatre of war. Players are plunged into the action thanks to the exclusive IRISZOOM Engine which offers an intuitive interface that allows for smooth, rapid transitions from a birds-eye view of the entire conflict, down into the heat of the battle and vice versa. In R.U.S.E., players use their brain as the ultimate weapon, fighting a war of perception, where the ability to deceive and mislead the enemy determines success. A first in a strategy game, R.U.S.E. promises to reinvigorate the genre by using deception to give new-found depth to the game play. [Ubisoft]

R.U.S.E. which is now available for PC, Xbox 360, and PS3 is a RTS strategy game developed by Eugen.  Being a fan of the RTS genre I was kind of excited for this game, especially after seeing all of the promise the game held after playing the beta.  The review for this game was done on both the PC version of R.U.S.E. via Steam, and the Xbox 360.  R.U.S.E. takes place over multiple time frames during World War II, and packed with both a robust single player campaign where the player will control both an up and coming major Joe Sheridan and General Richter.  For the most part the story does a well enough job to keep the action interesting, cutscenes are sparse but the ones that you do see move the story along nicely.  For the first part of the single player campaign, it could definitely be described as a little boring, you are limited to moving around bits and pieces on the battlefield, but you get to see some of the strengths and weaknesses of some pieces.  However, when viewed as a vital tutorial you’ll be glad you paid attention in the early going.  AS the game progresses R.U.S.E. opens up a bit as to what you can produce.

Besides the main campaign, like any good RTS R.U.S.E. has a very entertaining multiplayer component to it.  You can play Custom Skirmish mode where you can play a 2 player or 4 player map include some A.I. and hone your R.U.S.E. skills for the extremely deep human multiplayer component, which also allows you to play against a single human opponent or team up with a friend to play 2 vs. 2.  The options are truly endless in R.U.S.E. multiplayer you’ve got your standard Tank, Air, Anti-tank, Anti-Air, and Ground Units and for the armchair generals out there that like plotting out your attacks with a wide variety of options.  But as the name says R.U.S.E. is about the art of deception.  Stealing enemy intel about an incoming attack or showing your enemy fake units to throw off their game plan is all in fairness with R.U.S.E. and it adds a great big layer of strategy in this RTS game.

Here’s what we loved and hated about R.U.S.E.

It’s generally a scary proposition picking up a real time strategy game for (insert console name here), so many developers have unsuccessfully ported their games to console and because of that you always have to wonder if they got this right or not.  Thankfully, Eugen Systems took this into consideration when making their game.  R.U.S.E. performs equally well on both the console and PC.  The controls and menu system are simple enough and manage to cover everything from producing your units and bases to executing ruses from one neat little menu which can be expanded and collapsed with one button press. Selecting multiple and single units may actually be less of a hassle on the console as you controller navigation menu which remains perched in the corner of your screen will kind of hold your hand at all times.

Aside from not being a bumbling clusterf#ck in the controls department, the strategy elements in R.U.S.E. are to be bluntly put, awesome.  There is such a wealth of things to do and try in plotting out your victory.  Aside from the standard units, the ruse attacks are actually vital to your success on the battlefield.  These deceptions can severely hinder your opponents ability to get a read on your strategy and ultimately keep them on their heels.  As battles progress you unlock new ruses which can all help you in different ways depending on your specific strategy for a given battle.

Hiding units in towns and forest can set up ambushes, flying bombers under radio silence to get a one up on your enemy, the deeper you dig into R.U.S.E. the more you realize the sheer amount of tactics that can be deployed during a match.

R.U.S.E. is an expectantly sleek and fluid game. From the the head down to the toes, R.U.S.E. is extremely polished in nearly all aspects.  Single player cutscenes are extremely well rendered and move the story along nicely.  The tabletop war room display can be zoomed into nearly ground level to get a micro view of the action and can also be zoomed out to get a full scale view using colored symbols to denote friendlies and enemies.  The menu system is neatly organized with all commands and options accessible from the one streamlined feature.  Which can easily be called upon when needed or hidden when chosen.

Since the war took place on many fronts and during multiple time frames R.U.S.E. incorporates this in the many maps available to play on in both the campaign and multiplayer.  In multiplayer the game even lets you choose which era you want to play in 1939 being the earliest and least technologically advanced era of the game, up until 1945 where you have all that both sides have to offer in terms of weaponry and tech.

While the campaign enjoys all of the good things I have mentioned thus far, it can drag on to be a little bit slow.  The World War II setting has literally been done to death.  Eventhough, R.U.S.E. is a fresh spin on the genre, the campaign can be described as mediocre at best.  It just fails to employ some of the tactical goodness that is offered in the multiplayer suite.

One of the major complaints thus far in R.U.S.E. by myself and by others I have spoken with within the community is that there just aren’t that many people playing the game.  Whether on Steam or via Xbox Live, newcomers will more that likely be matched up with hardened veterans as many of the games players were early adopters of the title and have learned many of the games numerous nuances and aren’t hesitant to start off the game with a R.U.S.H.  which can be both intimidating and frustrating to new players to the game.  For the most part, the community is fantastic, in both the Xbox Live and Steam communities users exchanged pleasantries and answered questions freely I must note.

In a year that has included one of the most anticipated Real Time Strategy games of recent memory in StarCraft II, R.U.S.E. has jumped into the fray in a big way.  It’s an original twist on the genre, with exceptional presentation and streamlined features for a game that is quite deep to say the least.  The glaring weak points of the game, mainly the lengthy campaign, may not be for everyone.  However it is a strategy game that has it’s players thinking outside of the box, with individual battles trotting down unique paths each and every time you play.