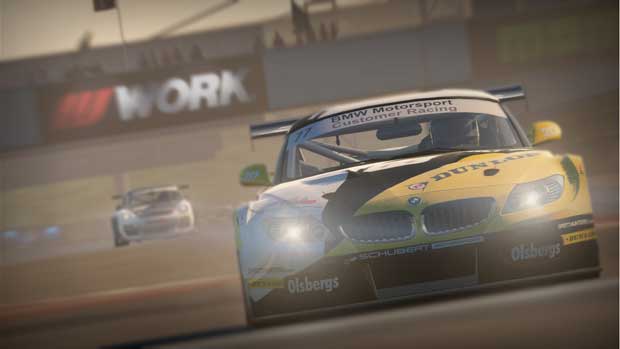 The critically acclaimed Shift franchise returns to the track to deliver the most physical racing experience to date with Shift 2 Unleashed. Feel what the Driver’s Battle is actually like in an unparalleled racing experience that captures the physicality and brutality of being behind the wheel going 200mph. Frighteningly authentic physics and degradation of tracks and cars, thrilling night racing, and an eye-watering sense of speed combined with the helmet camera puts you right in the heart in the action. Feel every scrape, bump, and burn out in an all-out fight to the finish line. Shift 2 Unleashed sets the bar for realistic racing and gives all the excitement and exhilaration of race day in a groundbreaking authentic experience.

Like the original game in the young Shift video game franchise, Shift 2 Unleashed is a Need For Speed game, but one that falls decidedly in the Simulation game genre as opposed to an arcade racer. The game features first-person oriented racing in which players experience true in-cockpit vibrations with every scrape, bump and scratch that their cars encounter. In-game players pursue the FIA GT1 World Championship and GT3 European Championship via a point-based experience system as they take on the roles of real-world drivers and a variety of race types across equally real-world tracks in a wealth of cars. – EA

One thing that we’ve grown accustomed to with racing games this generation is unbelievable graphics, Shift 2 is no exception to this trend.  The game features some really remarkable lighting and very well rendered locales to make for a near picture perfect replication of on-track racing.  The game offers quite few ways to embark on your driving experience, but the in-car views are the strongest looking and most immersive of the bunch.  When the original Shift released, one of the most heralded features was the in-car view because of the visceral crashes and great sense of speed conveyed from the view.  Once again, the in-car view is of the highest caliber in the genre.

A new inclusion to the franchise is the Autolog franchise.  When another title in the stable of Need For Speed games released late last year, Need For Speed: Hot Pursuit, they incorporated the Autolog features.  This feature keeps constant track of your friends on your Network of choice, urging you to make better lap times, race times, and other achievements throughout the career and online modes.  If you have no experience with the Autolog features, it’s a social network feature built into the game.  Each and every in-game achievement can be compared with your online friends, keeping a constant rivalry brewing as you can attack your friend’s times and they can attack yours.

The series has moved forward again with its XP system,  the game keeps the well conceived single player portion of the game fun with a series of challenges offered on every track.   So aside from the standard grind from the starting to finish lines, you’ll also be rewarded for perfect laps, mastering corners, and other challenges that will bolster your XP.  The XP will earn new levels, opening up new cars which can be upgraded and customized in a wide variety of ways.

For the gear-head customization is a very important feature of a simulation racing game.  Shift 2 Unleashed has this in spades, allowing you to customize each and every important facet of your car’s performance qualities.  This allows you to upgrade cars from entry level cheapies to full fledged racing monsters.   And there’s plenty to customize in Shift 2.  There are 130 vehicles that you can earn, unlock, and purchase that span 37 manufacturers covering most of the bases that racing fans want to see. You’ll also have a wide variety of locales to race in Shift 2: Unleashed.  The game has a nice mixture of real and fictional tracks, 35 in-all.

Shift 2: Unleashed is an intense racer regardless of how it is viewed.  Self described as a simulation racer, this driving game has a definite arcade edge to it that ratchets the intensity up a few notches.  When you do mix the beautiful views, intensity, and some great sounds, the racing is fun and immersive.  It’s very easy to lose yourself in Shift 2, and if you do tend to zone out while racing you’ll get a rude awakening upon hitting a wall or another car.  Conveyed through screen blur and color bleeding you’ll know it if you have a mishap on the course.  This is one area that just hasn’t been covered in other racing games, and it’s one that makes you want to keep your car on the road.

After the first few times you crash, you’ll learn to fear the results of making poor racing decisions in even the most of pristine conditions.   But it’s not always optimal driving conditions, there are many times throughout the game where you’ll be tasked with night-time racing and it makes for one of the most heart pounding racing experiences ever.

Whats also nice about Shift 2 is the damage system.  You’ll have the option to pick the levels of damage from none to full with multiple levels in-between, to play as you see fit.  As mentioned above, the crashes can be quite disorienting.  When you do come out of a crash and regain your senses only to find that you blew out an axle it adds to the randomness of the racing in general.

There’s a lot of icing on the cake of Shift 2 Unleashed,  there’s plenty of eye candy and options that make the game a beautiful and fun game.  However, as advertised, Shift 2 is a simulation racer.  As a simulation racer, aside from the awesome crashes and beautiful sights and sounds of the game, the driving feels very average when compared to other simulation style racers.  It’s not hard to see that Shift 2 is trying to offer gamers the best of both worlds.

With Slightly Mad trying to toe the line on the simulation front while still offering a “fun” experience, the result is that the cars don’t feel as responsive as they should.  This is most notable when you start taking the racing assists off, cars will respond in various ways and at times even maintaining a straight line can become an exercise in futility.

While the world of Shift 2 Unleashed’s career mode will keep you coming back to challenge your friends for better times and scores, the online portion of the game is pretty barebones.  Nothing new or innovative is added to the mix of the multiplayer portion of the game, but if you get your kicks by competing with the racing community, there is some fun to be had.  An incorporation of some different game modes like Forza’s fabled cat-and-mouse would have been interesting and spiced up the multiplayer portion considerably.  There are some deviations from the standard race like a time-attack mode and a capture the pack mode but neither proved to be any more fun than just your standard race, in my opinion.

Because of some of the control issues that are mentioned above, many of the great features of the game can’t be experienced fully.  So, as great as the in-car views are, there seems to be a disconnect between the ways that the vehicles handle in the different views.  Ultimately, each race I battled back and forth between the in-car view which was usually the root of some very twitchy controls, and the flat first-person view which wasn’t as great visually or as immersive.

A helmet cam has also been included in Shift 2, and unfortunately because of some control issues and a general uselessness because of it’s disorienting nature it’s hard to give it points for its inclusion, as cool as it may be to look at.  It will show the view from the driver’s eyes, peering around corners and all.  Many times you won’t even be looking at the road ahead of you, and if you’re having problems with the controls it will certainly amplify those when the camera suddenly shifts to view an upcoming break in the road.

When a game is billed as a simulation racer, you come to expect that what you’re getting will be a simulation.  This isn’t quite the case with Shift 2: Unleashed.  So what I was expecting to play was a much different experience than what I actually got.  The general lack of handling and pinpoint controls that simulating racing should incorporate are truly lacking in Shift 2.

This becomes even more obvious when the game tries to do things like Drifting.  The career mode features a long stretch of races that are strictly dedicated to drifting, which is almost unplayable in any camera view other than behind the car.  Even then, Drift Mode has a big learning curve.  Many of the races will take you multiple replays to master the in and outs of the drift tracks.  Even in its most simplistic of tracks, the drifting can take some time to get used to.  I think it comes from a lack of a clear tutorial that really makes sure you have the basics down.  There’s also no clear reward for mastering the drift tracks.  There isn’t an online drift mode, aside from competing with friends on Autolog and it made me wonder why it was even included in the first place.

Shift 2 is a unique driving experience.  Unfortunately, taking aim at franchises like Gran Turismo and Forza led me to believe that Shift 2 would be a much more polished experience.  Shift 2 is a great arcade racer, but as a simulation it’s average, and needs alot of work in the some of the handling aspects of the game.  A more balanced feel between the in-car views, some of the game-modes, and controls, would make Shift 2 much more promising.  As far as simulation racers go though, I just felt like I’d rather be playing something else that was actually a simulation racer.