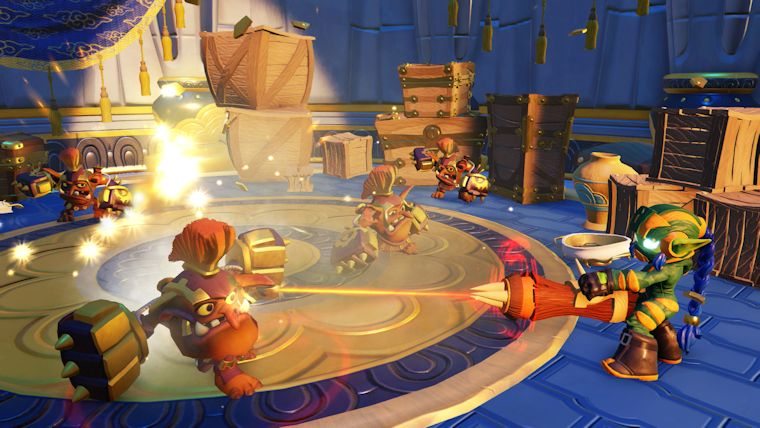 There has been a recent surge in the toys-to-life segment of video gaming and the Skylanders series was the pioneer that later helped to spawn a number of others. Each subsequent entry has added a new mechanic to the game, and the addition of vehicles in Skylanders Superchargers proves that this series definitely still has some gas in the tank.

Over the last four games in the Skylanders series, there have been a number of different innovations implemented, including last year’s trap mechanic. Skylanders Superchargers kicks the series into a new gear though, as the new mechanic of vehicles is integrated very well, without getting in the way of the already existing platforming.

The current gaming industry really is missing a strong platforming genre of games, so the Skylanders series has been able to carve a niche by targeting not only kids, but also adults. The 3D platforming elements here are very strong, with each Skylander coming equip with a number of attacks, of which can also be upgraded as the game goes along. The various Skylanders also have different elements as before, with some of them being more effective in certain areas.

Each of the different figures is very distinct from one another as well, especially between the two that are provided in the respective starter packs. The Wii U version comes with the Turbo Charge Donkey Kong hybrid amiibo/Skylander, which was implemented very well without it just feeling like a random Skylander with the Nintendo character plastered over it. Just like the rest of the characters available, his moves are carefully crafted for really fun combat. The PlayStation 4 version, along with all the others replaces Donkey Kong with Spitfire, which is also very well designed in-game.

Each of the Skylanders figures can be brought into the game, including any past releases as well, but each of them is pretty superfluous to the story itself. That is where the familiar characters like Flynn come into play, offering a story that is good enough for kids, but nothing too special in the long run.

Across a fairly lengthy around 50 chapters of gameplay, you will journey through many different areas, where the developers do a fantastic job at providing very creative level design. The various areas require some unique puzzle solving at times, with Cap’n Cluck’s Chicken HQ being one of the best. Not only is the stage well crafted and fun, it also showcases the game’s comedic side in spades. There is even an area in the game where side-scrolling is brought into the fold through storybook style missions.

The figures themselves are only half the fun this time, as Skylanders Superchargers has taken the series to new heights with the addition of vehicles. Spanning land, sea, and air vehicles, Skylanders figures are paired with one of these vehicles at all times for use in the game. Each one of these types of vehicles can be used by any single Skylander, rather than being specific to one figure, which was a great decision by the developer.

Throughout the story mode, you will reach vehicle-only sections. These switch up the gameplay a lot and actually have some differing styles themselves. The land vehicle, which comes in the starter pack, is used in two different ways. Some of these are fast pacing driving sections where you go from one point to another while avoiding obstacles, and others are combat heavy areas against smaller enemies or even bosses. These are an absolute blast to play and are very much worth replaying through the game to experience them all.

In a lot of ways, the usage of the land vehicle in the story mode is like that of the Batmobile in Batman: Arkham Knight. They can be used in varying ways and the battles are even done in similar fashion. The only issue is that sometimes it can be hard to target enemies with projectile attacks, as you need to be facing them, which is often hard when on the move, though an alternate control scheme can help to alleviate that a bit. 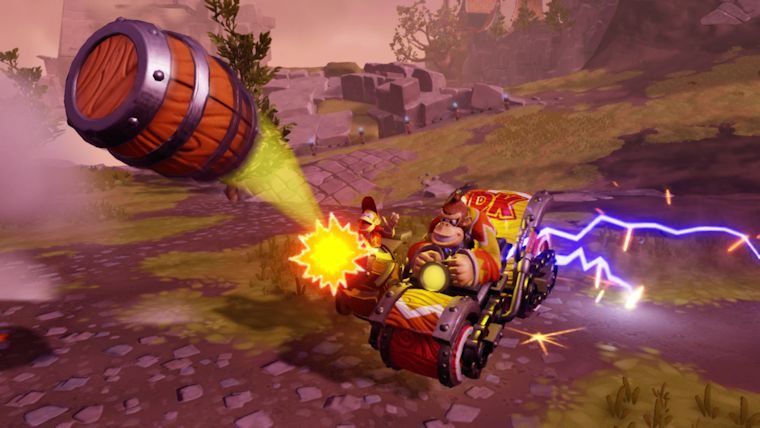 The vehicles are very well implemented into the regular gameplay through the main story, but with the addition of vehicles, of course there had to be some sort of racing included as well. A lot of racing modes being thrown into non-typical racing games are major disappointments, but the racing found in Skylanders Superchargers is quite a bit of fun.

The racing itself can be done from within the main story, but it also can be selected directly from the main menu. There are two more basic options available, a single race against a group of opponents, which can also be done online, as well as a Time Trial mode. The racing mechanics are not quite up to par of something like Mario Kart, but you can definitely see a lot of the inspiration from a series like that. In fact, the ability to use land, sea, or air vehicles feels very reminiscent of Diddy Kong Racing.

The base game provides you with two tracks for each type of vehicle, with two more of each being unlocked by purchasing playsets based on that vehicle type. This does feel somewhat limited, making the levels grow old pretty fast, but they are really well designed regardless. There are also items that you can get during races, though like the track selection, the number of them is pretty minimal. There are also three other modes, Boss Pursuit, Supervillain Cup, and Mirror Cup that are great fun, but do require the purchase of those playsets to use.

One of the problems that the Skylanders series has had at times, with last year being one of the worst cases, is the almost incomplete feeling of playing the game without having to buy way too many extra items. Obviously, that is a major part of the whole toys-to-live genre, but at the same time, spending money on a starter pack should provide you a full experience. Instead, Vicarious Visions has made Skylanders Superchargers a game that doesn’t feel as much like it is behind a crazy paywall of figures or vehicles, though that problem is not gone entirely.

Instead, outside of the base starter pack, there are really only two others Skylanders items that need to be bought to get the full single player experience, a sky vehicle and a water vehicle. These are used, as previously stated, on the vehicles gate sections throughout story mode, as well as in the racing modes. The Starter Pack for all versions comes with a land vehicle, which actually is the one that is used most. Trap Team felt like so much of the game was locked behind elemental games, but Skylanders Superchargers wisely makes the entry fee to the game much less. The races do take a hit due to the aforementioned required trophies from playsets, some of which aren’t even released yet, but it is much better than in the past. 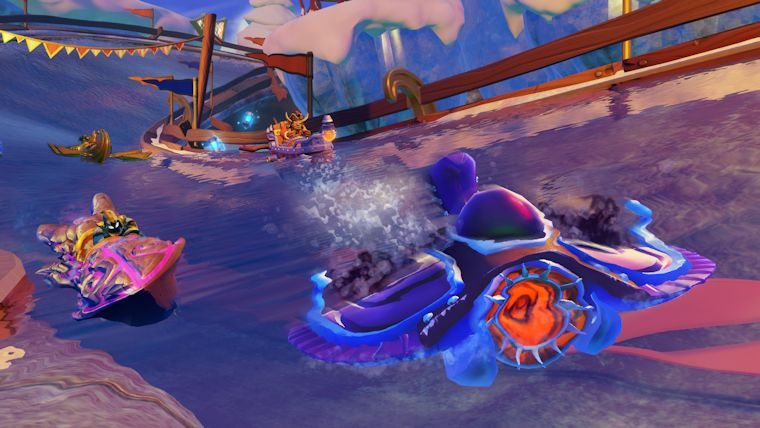 Skylanders Superchargers is certainly not the type of game that will be a standout in visuals, but the game still does look quite good. The PS4 version does look a little better than the Wii U version, but the difference isn’t all that high. The vehicle sections are where you really get a glimpse of beautifully designed stages, with both versions of the game performing exceptionally smooth, even with an abundance of enemies on the screen.

Skylanders may have more competition in the toys-to-life space than ever, but the series is showing no signs of slowing down. The figures required for the full experience is much lower in Skylanders Superchargers thankfully, though the racing portions do take a hit in that department. The story is still not the most compelling, but the addition of vehicle-based gameplay sections has kicked the series into overdrive with Skylanders Superchargers.