Sonic Colors is perhaps one of the more exciting and true to form 3D Sonic titles that has come out since the 6th console generation. A handful of the Sonic titles since Adventure 2 have had some fatal flaw to them (the horrors of Sonic ‘06 and Sonic Boom just to name a few) or have been mostly forgettable.

Sonic Colors is a game that has stood the test of time. It lived vicariously through its memes, well-received Wisp mechanics, solid gameplay, and memorable soundtrack. Sonic Colors came out 11 years ago but was only a Nintendo Wii and DS exclusive. It has now gotten the HD remaster treatment like Monkey Ball Banana Blitz did back in 2019. 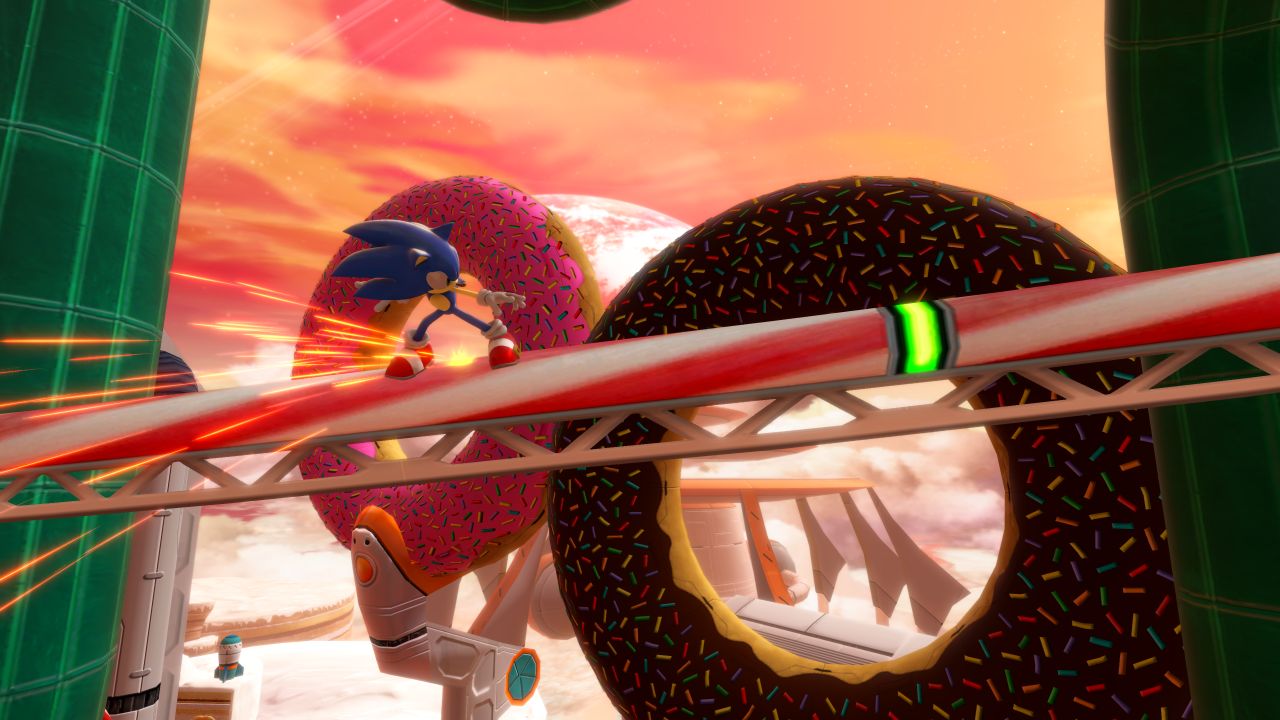 Owners of PC or current-generation consoles can experience one of the better 3D Sonic titles since the Adventure games in all of its HD glory. Sonic Colors: Ultimate is the same game we all knew from 2010, but it’s not just an HD port. This game does have some new things to offer like the Rival Rush mode featuring Metal Sonic, as well as the Jade Ghost from Team Sonic Racing.

The Rival Rush mode is a series of races against one of Sonic’s sworn enemies— Metal Sonic. He’ll appear in the different worlds of the game and you must reach the goal ring before he does. It’s like a time-trial mode but with higher stakes. The addition of the Jade Ghost will add new paths to take and new areas to explore in the levels we once perused in the original 2010 game. 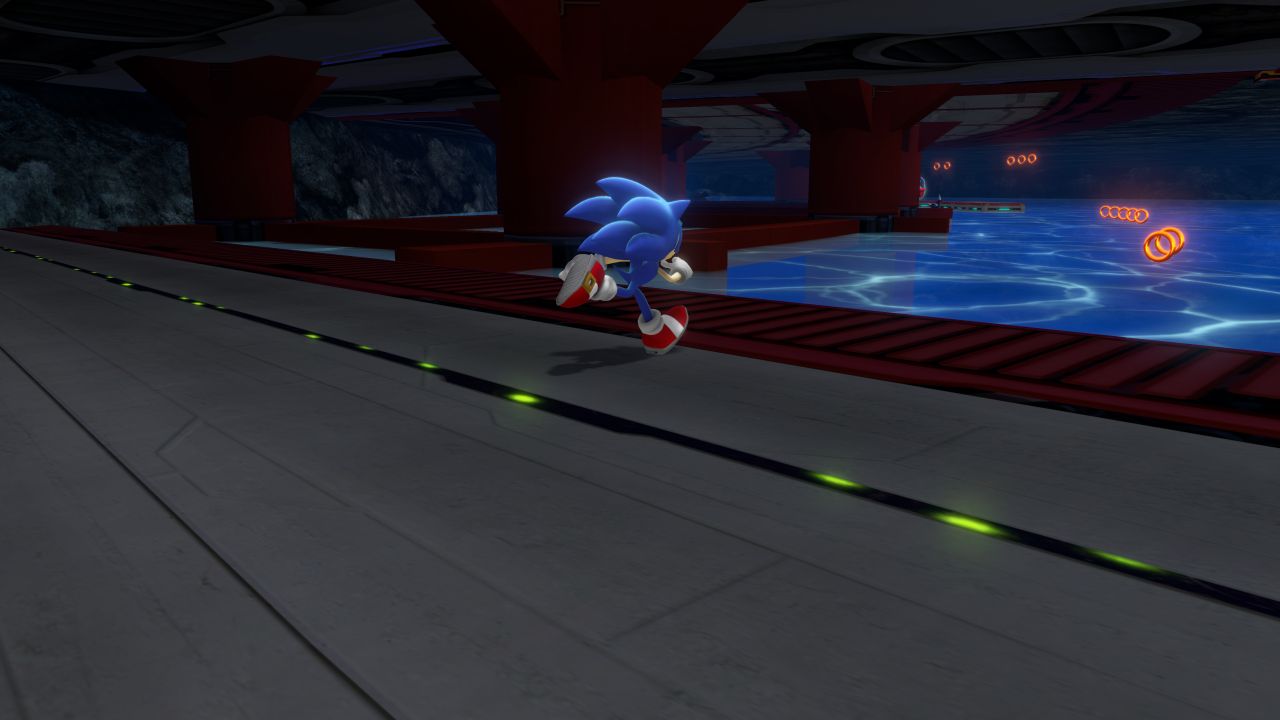 On top of that, the game does allow for you to purchase cosmetics for Sonic, giving him just a bit more to his already bubbly personality. Customization options range from different colored gloves, shoes, boost effects, and auras.

Also, in light of the resurfaced game difficulty debate, this game does a swell job in adding in modes for people who are new or not so good at platformers. Sonic Colors: Ultimate has this new Tails life system where if Sonic falls into a pit, Tails comes in to save him and bring him back to the nearest safe platform. It’s like a secondary checkpoint system. This also preserves the score and rings that would have been lost had you actually lost a life. 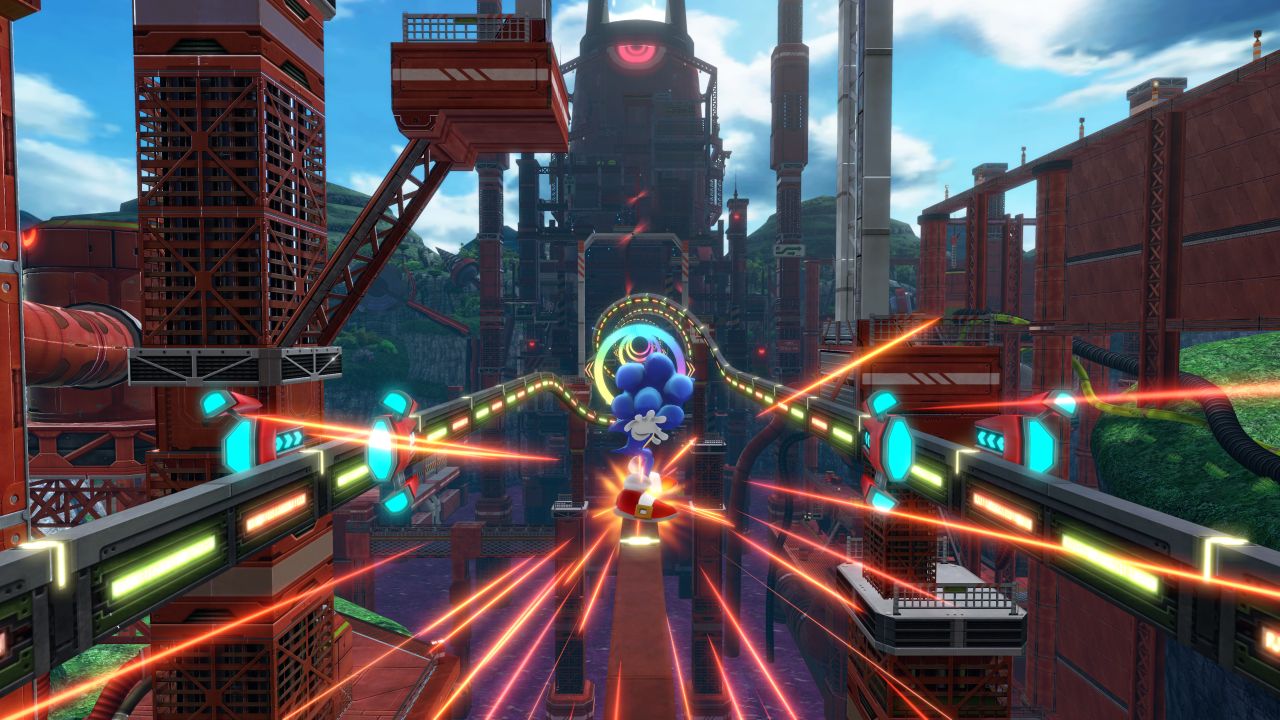 Sonic Colors: Ultimate provides a good time from start to finish. It’s as true as a modern Sonic game can be. You play as Sonic and zip through levels at breakneck speeds, with the occasional switch to platforming and light puzzles. It may seem like a short game if you’re a player who plays a game from start to credits, but there’s a lot more to go back to in subsequent playthroughs.

Mentioned earlier about the Wisps, this game, even back in its original 2010 variant introduced this new mechanic that has been lightly adapted in other titles called Wisps. They sort of break away from the typical Sonic The Hedgehog gameplay formula of going fast and holding forward. These Wisps, which are tied heavily to the game’s story, bring in a refreshing and very strong element to the game’s exploration and collectible hunting. 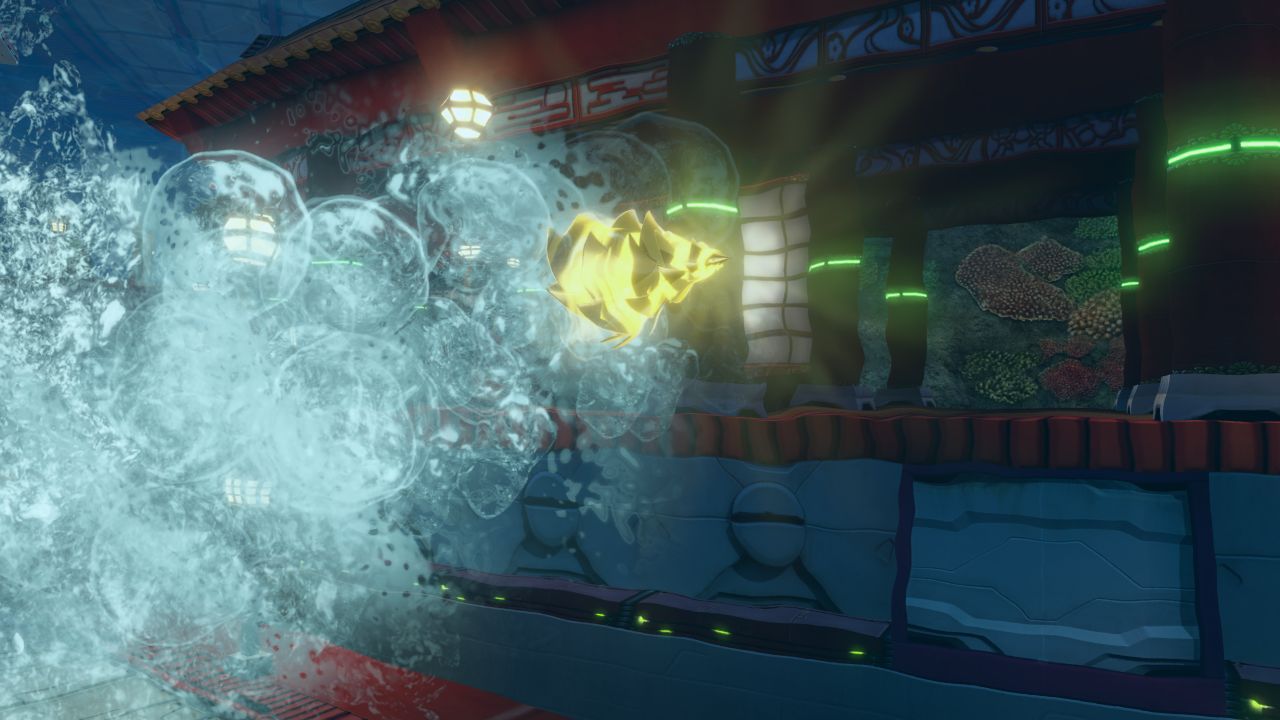 They essentially replace the power-up capsules in Sonic games like the electric barrier or fire barrier and provide things like wall climbing via the Pink Spikes Wisp. There is also the orange Rocket Wisp which shoots Sonic so high up in the sky, putting him into this freefalling mode where he can reach platforms and higher pathways that wouldn’t be possible with anything else.

There is also the classic Laser Wisp that temporarily turns Sonic into a laser and shoots him through different obstacles in his path. There are additional Wisps in the game that really add more depth to what seems like a simple “go-fast” platformer. 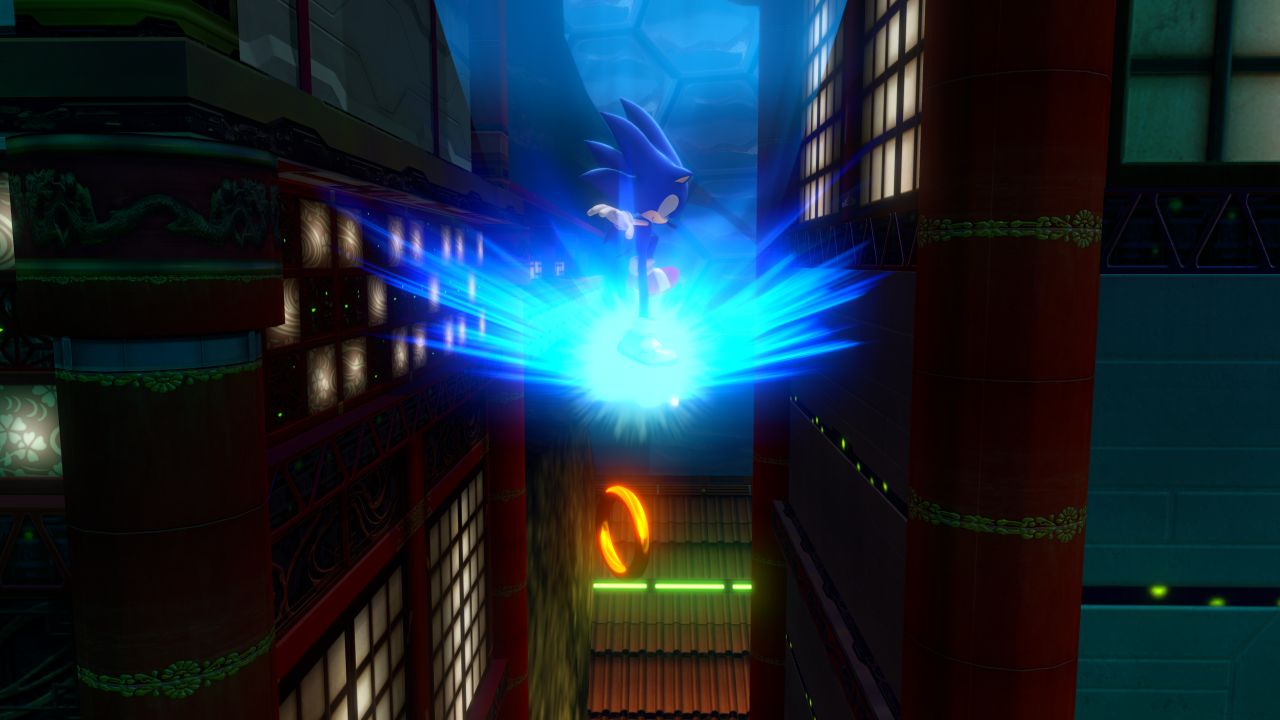 Sonic Colors: Ultimate isn’t entirely a 3D Sonic game, though. The game alternates between 2D and 3D sections in levels, which can be a bit disorienting at first, but it’s a nice change of pace. Most of the 3D sections tend to be the parts where Sonic is going at his fastest, while the 2D parts are where it’s a lot slower in pace and deals with more traditional platforming.

Unfortunately, and hopefully the developers address this, the Quick Step sections are a bit clunky and oftentimes lead to failing those parts. Quick Stepping is a feature in more recent Sonic titles where he is running on a solid path where he can quickly dash to the left or right to dodge obstacles and gain rings. As it is right now, the controls are bound to the same left stick that you’d use to move Sonic in any direction with. 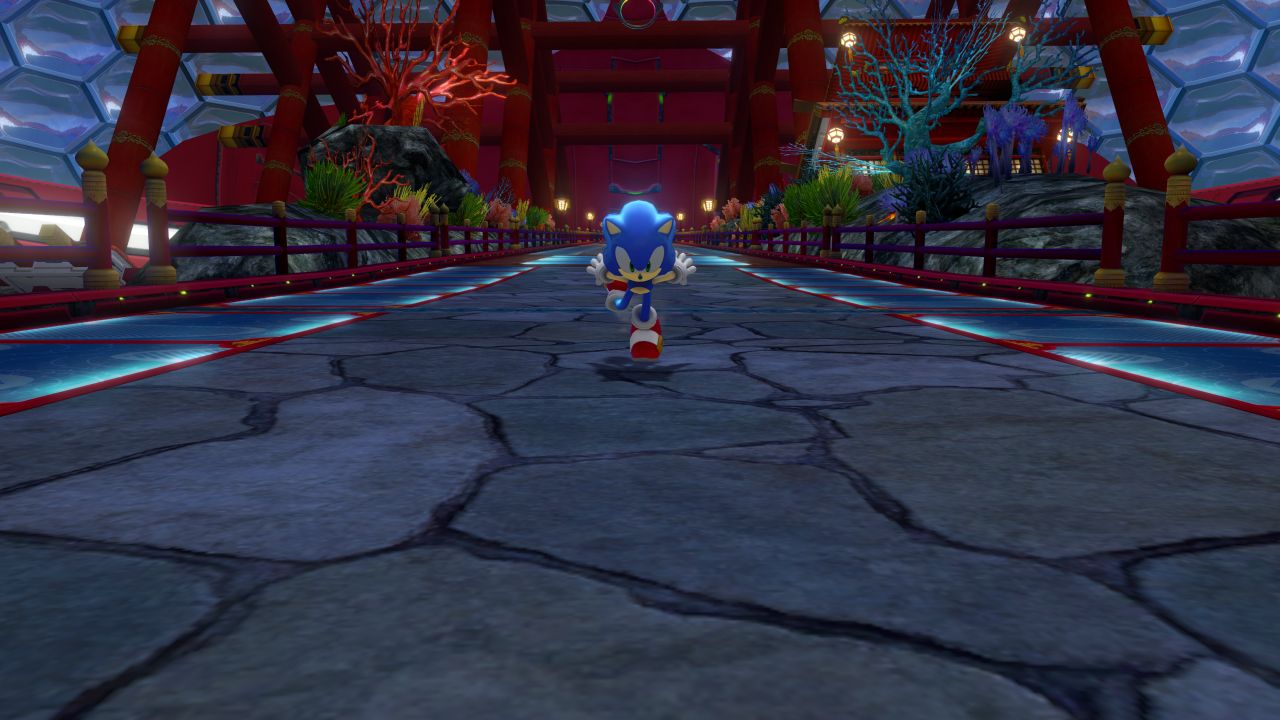 Sometimes when you shift multiple times in succession, it’s hard to reorient the stick back to the center and do it again in the same direction. This oftentimes leads to misinputs because of the fast timing. In other games like Sonic Generations and even Sonic Forces, players can press the right and left bumper buttons on their controllers to perform Quick Steps in these fast running segments. Sonic Colors: Ultimate does not have this, but it should, because running certain levels to get collectibles is such a headache.

Since this game got the visual upgrade, so did the performance side of things. This game, at least on the PlayStation and Xbox consoles as well as PC, runs at a smooth 60 frames per second with 4K capabilities on newer hardware like the PS5 and Xbox Series systems. It’s beautiful and keeps up even during the intense running sections. Nintendo Switch owners will have a different experience, though. 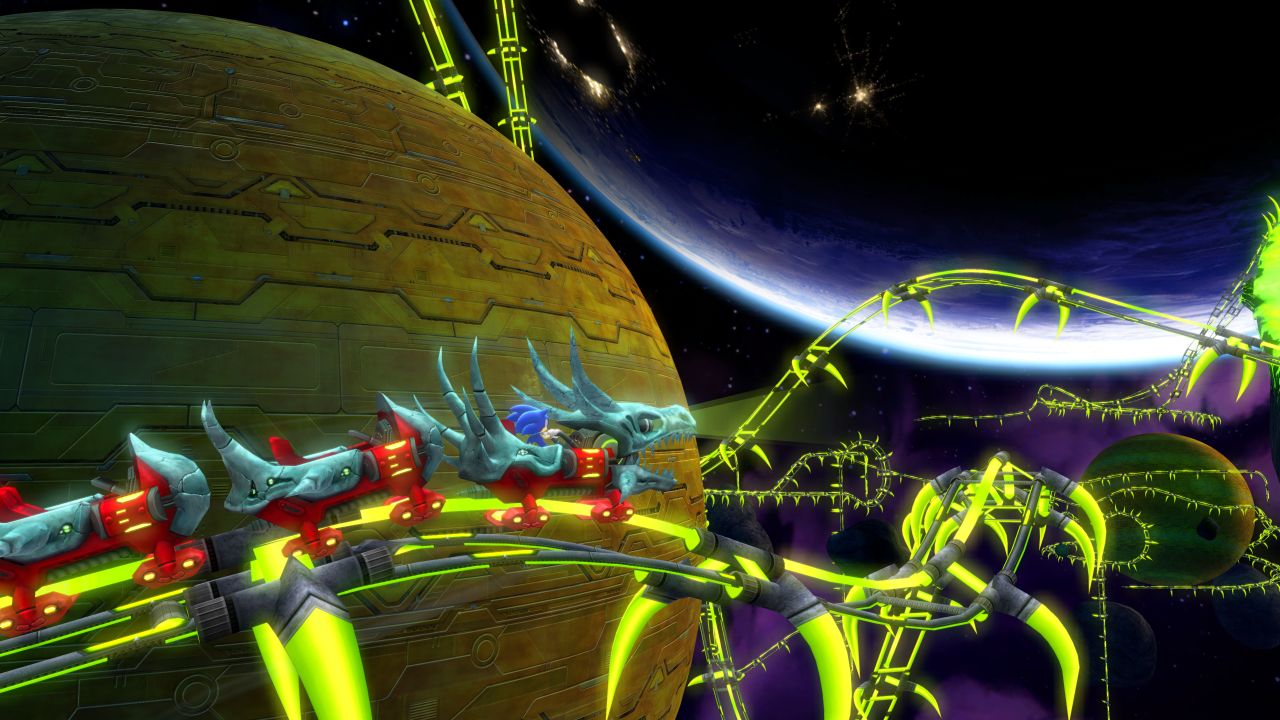 While this game’s visuals are really crisp and deserve the praise for the quality, the cutscenes haven’t really been updated all too much. They seem a bit too grainy, and at least in my experience, the audio is much quieter than the rest of the game. These cutscenes look like they were upscaled to about 720p at best. But hey, at least we can now experience the notorious “No copyright law in the universe is gonna stop me” scene in HD.

This game, aside from being a graphical upgrade from its original self, also has a fully remastered and somewhat remixed soundtrack. The orchestral themes are fantastic; the individual level themes and their remixes are top tier and what makes Sonic games so great. Say what you want about the newer games, but the orchestral arrangements give games like Super Mario Galaxy a run for its money. 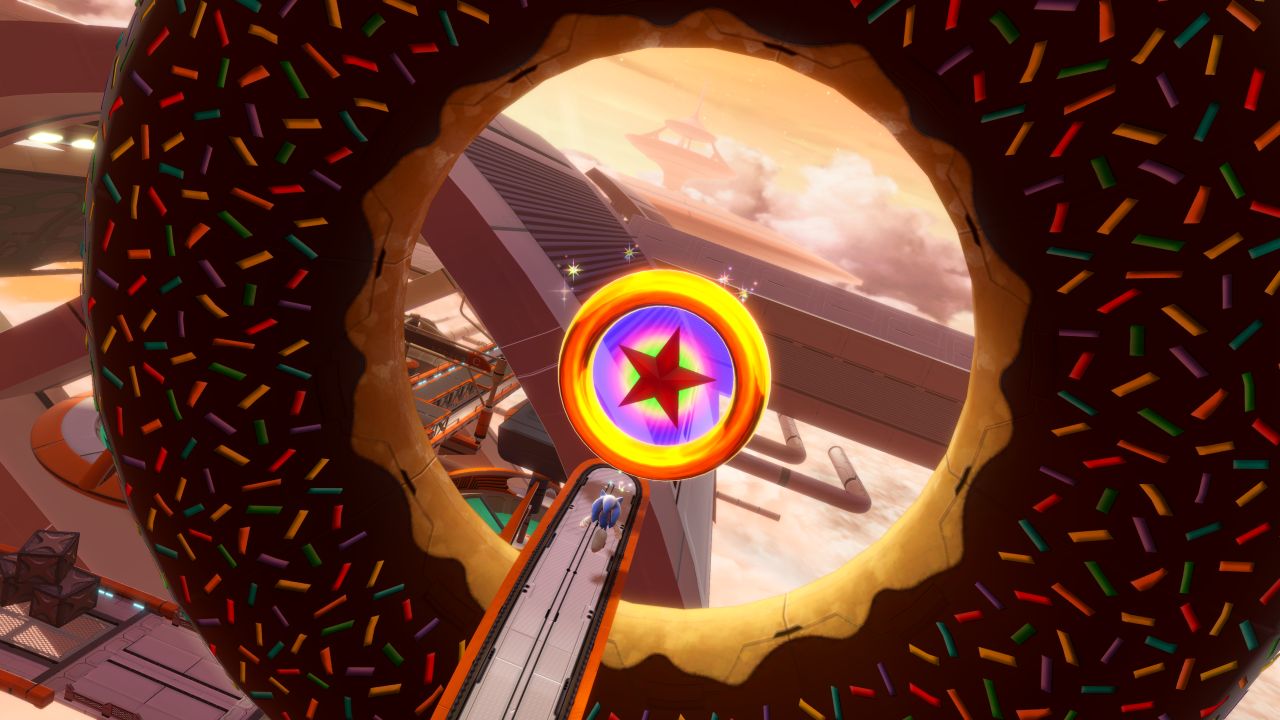 The dynamic music for each world and each individual level give them so much personality and uniqueness. Keep in mind, this is a very colorful game (sorry for the bad pun). Sonic games are typically filled with rock music, but this game dips its toes in a lot of popular modern genres. Honestly, with the soundtrack coming out on the 29th on CD and digital streaming services, this will complete the Sonic Colors experience.

Sonic Colors: Ultimate is an exceptional port for modern day consoles. It’s one of the few great 3D Sonic games that gives hope that Sega will give the iconic Blue Blur a proper return to form. For people who have never played this game but like Sonic games in general, I highly recommend checking this out. It’s one of those games that feels refreshing enough to reel people back into the series after being in a decline. This game breaks from the conventional “gotta go fast” mechanics but does so in a way where it still maintains its identity and charm that fans grew up with in the early 2000s.