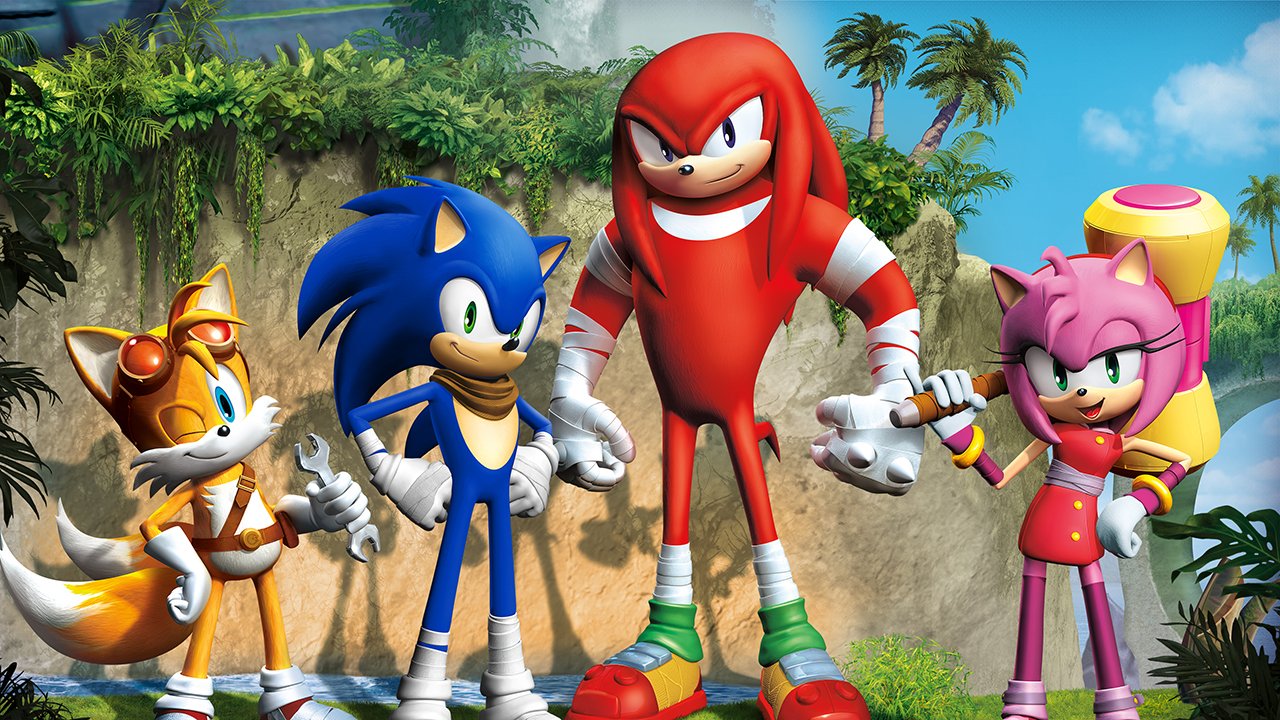 SEGA hit the jackpot in the early 1990s with the introduction of the character that would become their mascot, Sonic the Hedgehog. After a string of highly successful and critically acclaimed titles, Sonic seemed nearly unstoppable, even when transitioning to the 3D plane with Sonic Adventure. However, the series has been extremely inconsistent since that release. With the launch of a brand new television series in Sonic Boom, SEGA has given Big Red Button Entertainment the reigns with Sonic Boom: Rise of Lyric, which takes a major step backward from all the positive that Sonic Generations brought back to the franchise.

Serving as a prequel to the new television series and having four of the most popular Sonic characters in the starring roles, Sonic Boom: Rise of Lyric has plenty of room to maneuver in terms of story. Unfortunately, that opportunity is not taken advantage of here at all, with a story that is about as formulaic and by-the-numbers as possible with the resurrection of the villainous Lyric. Nobody expects the story in a Sonic game to be the standout, but even so, the writing is extremely subpar and feels completely separate from the TV series it is based upon.

A game developed for children will almost always have a level of corniness to its dialogue, but the constant jokes and banter between the four leads is incredibly repetitive and uninspired. The worst comes when the characters commentate exactly what they are doing, such as yelling “bounce pad” as soon as they jump on a bounce pad. This is not just a problem early on either, as it continues throughout the game and grows tiresome very quickly.

In lieu of a stage select approach, Sonic Boom: Rise of Lyric offers hub locations that house the various areas. It is good to see a return to this formula, as previously seen in Sonic Adventure, but instead the overworld feels incredibly lifeless and dull. Even worse is the useless map system, which makes it a pain to simply figure out where to go a lot of the time, forcing players to revisit the same boring locations again and again.

Sonic Boom: Rise of Lyric attempts to return to the formula found in past 3D titles, with four distinct characters who each have a special ability. Rather than giving them each their own discernible stages though, Big Red Button Entertainment has chosen to go with a party effort. Except when paired down to only two, the player has the ability to switch between Sonic, Tails, Knuckles, and Amy by pressing the corresponding direction on the D-Pad. 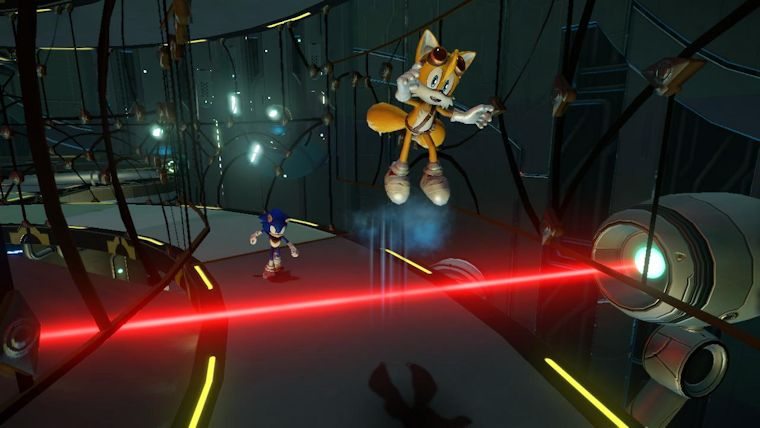 The ability to switch between the four is where one of the biggest flaws of the game sprouts up, horrific AI. With a party system like this, the other characters are supposed to follow the player to allow for easy switching. However, most of the time the others will just stand around doing nothing, which requires the player to backtrack just to find them and switch when needed.

Of the special abilities, Sonic’s iconic spin dash will be used the most, as the player can jump and use homing attack enemies with it. However, the other three have moves that take way too long to use and are best avoided in combat. These special abilities are basically the only defining traits about each characters as well, besides small differences in the style of their attack, so fights become a matter of simply mashing the Y button. When there are four distinct characters to play as, there should really be more of a reason to bother switching between them in battle than just for aesthetics.

Big Red Button Entertainment has also implemented a brand new mechanic to the franchise with the Enerbeam. Used in a few different ways, including attaching to rails, as well as removing shields from or grabbing enemies, there is no difference in what character is using it over another. The Enerbeam is designed well, but still seems underutilized for most of the game.

Making it even worse is the game’s version of a skill tree, with only a few abilities that can be leveled up that span across all four characters. These include options such as ring magnetism and stronger combos, but one of the most useful is locked away only for those that also own the Nintendo 3DS game, Sonic Boom: Shattered Crystal. That is the ability to increase the max ring count above 100. This type of limit seems almost unheard of in a Sonic game and is incredibly daft, as the player will hold a full ring count most of the time, making the collectibles almost useless. 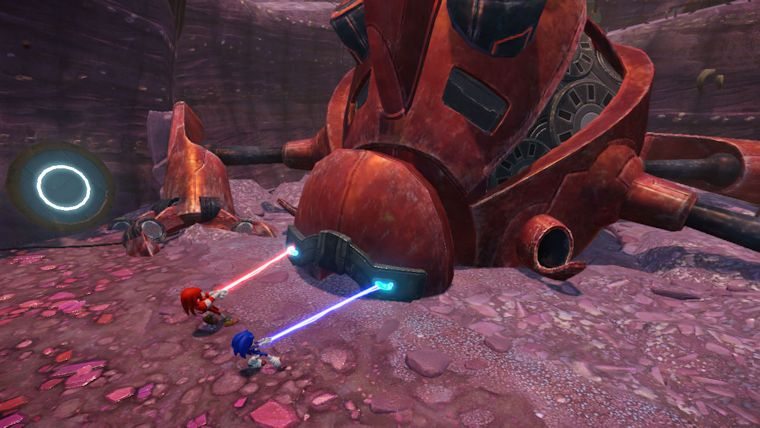 Sonic the Hedgehog has always been defined by his extreme speed, even in the 3D games. However, Sonic Boom: Rise of Lyric goes against everything that has worked in the past and slows Sonic down to a halt for a good majority of the game. There are occasional segments where Sonic and the rest of the characters are put into autorun, where all the player does is move left and right or jump. Otherwise, it’d be hard to tell a difference in speed between Sonic here and Mario in any of his 3D platformers. This is absolutely inexcusable in a game that dons the Sonic name.

Sonic Boom: Rise of Lyric goes against everything that has worked in the past and slows Sonic down

The biggest problem is that there is absolutely no run button for any of the characters. Each one can jog at a brisk pace by moving the left analog stick, but otherwise that is about as fast as anyone can go with absolutely no momentum whatsoever. Sonic can utilize his spin dash, but it is the most ineffective it has ever been. The burst is extremely short and cannot be extended by holding the button down, like any longtime fan of the Sonic series would expect. The only use one would probably get out of it is the speed ramps, but even those are pretty few and far between.

Instead of the speedy gameplay that is typical to the franchise, Big Red Button Entertainment instead has chosen to implement areas that have no reason being in a Sonic game. The biggest offenders are the top-down Riptide Boat segments in the game. Moving with the left analog stick and shooting with the right analog stick just does not feel right in a 3D plane, which is not helped at all by being incredibly monotonous and linear.

The lack of speed may be a blessing in disguise, as the camera may be one of the worst to ever grace a Sonic game. The jerky camera can be very dizzying with its erratic movement, which may force players to have to take a break occasionally. The camera itself also tends to get locked in certain areas, which is very bothersome when needed to assess where to go next. 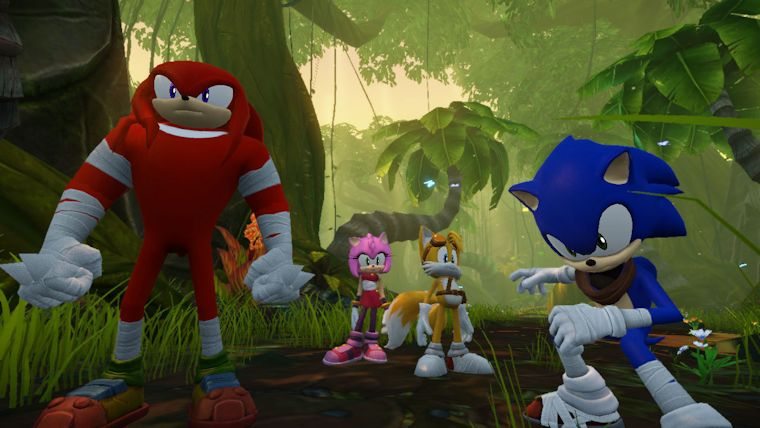 Sonic Boom: Rise of Lyric quite frequently suffers from an abundance of frame rate issues as well. Whether in combat or even in an occasional cutscene, the animation will slow down and quickly becomes a major distraction for the player. This issue is worsened in two player co-op, which is a great addition to have in and of itself, but is greatly hampered by the dip in frame rate.

Sonic may be fast, but he is not fast enough to outrun this abysmal game. Repetitive and ineffective combat, annoying banter, and dreadful AI plague Sonic Boom: Rise of Lyric throughout its very short campaign. The platforming is decent at times and the addition of two player co-op can be fun, but there is very little to find likeable beyond that. Even for the most diehard of Sonic fans that want a little backstory on the new television series, stay far away from this abomination.